He has defied the gloomsters. Now Boris Johnson must hold his nerve, writes SIMON WALTERS

The image spoke volumes. At Monday’s dramatic press conference, Boris Johnson was flanked by two of the most influential men in the country.

Until yesterday, the Prime Minister appeared to place himself firmly on the side of Whitty and his fellow scientists. His supporters looked on in dismay as he seemed to strangle every libertarian fibre in his being and chose to ‘follow the science’, ignoring the fact there is no consensus among the experts.

But the press conference changed all that. The Prime Minister may have been in the middle, but he might as well have been sharing Sunak’s rostrum – with Professor Whitty out on a limb. Any semblance of unity was smashed when the professor said that even the crackdown announced in sombre tones by Johnson for Liverpool did not go far enough.

At Monday’s dramatic press conference, Boris Johnson (centre) was flanked by two of the most influential men in the country – Chancellor of the Exchequer Rishi Sunak (right) and Chief Medical Officer for England Chris Whitty (left)

The new strictures were merely ‘base measures’, he said before appealing to civic leaders to introduce restrictions the Prime Minister had rejected as too harsh. Confirmation of the split came later with details of a meeting on September 20 and 21 of the Scientific Advisory Group for Emergencies.

This showed that SAGE, which includes Professor Whitty, had urged the Prime Minister to go much further than he did yesterday.

In effect the advisers wanted him to put the whole country into an extreme Tier Three style category. This would have stopped all household mixing, closed every pub, restaurant and cafe and instructed everyone to work from home. But the advice was thrown out by Johnson.

The first sign he was preparing to defy SAGE’s advice came on September 22 when the Covid slogan morphed into ‘Save Lives, Protect the NHS and Shelter the Economy’.

The inclusion of the economy was at the behest of Sunak, who has won a power struggle with Health Secretary Matt Hancock and Cabinet Office minister Michael Gove. The pair had led a Cabinet faction urging Johnson to stick with the advice of Professor Whitty and his colleagues. But they were outgunned by Sunak, Home Secretary Priti Patel and Business Secretary Alok Sharma. 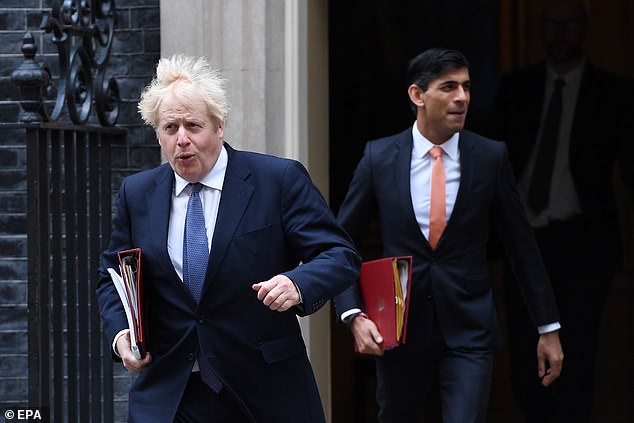 Until yesterday, the Prime Minister appeared to place himself firmly on the side of Whitty and his fellow scientists. But the press conference changed all that. The Prime Minister may have been in the middle, but he might as well have been sharing Sunak’s rostrum. Pictured: British Prime Minister Boris Johnson (left) departs 10 Downing Street with Chancellor Rishi Sunak

‘Saying you are “following the science” sounds reasonable enough but cannot be used as a substitute for taking decisions,’ said one prominent Conservative MP. ‘If we don’t save livelihoods as well as lives there will be no money for the NHS for generations.’

A minister who has worked with Professor Whitty said: ‘No one questions Chris’s integrity. As a doctor his only responsibility is to save lives. Every member of Sage knows that when the inevitable Covid public inquiries take place, they will all be judged on one factor: did they try to save every life.’

Significantly Johnson has consulted experts who favour a very different approach. He and the Chancellor have taken advice from the architect of Sweden’s anti-lockdown strategy, Professor Anders Tegnell.

They also heard from distinguished epidemiologist Oxford University Professor Sunetra Gupta, one of the authors of an anti-lockdown petition, the Great Barrington Declaration.

This amounts to a powerful rebuke to Professor Whitty.

And what has become clear is that not only does Johnson agree with much of the declaration, he is using it, in tandem with the gloomy declarations of Professor Whitty and SAGE, to shape Covid policy. Momentously, he has turned his back on the scientists for the sake of the economy. The question is, will he hold his nerve and continue to keep them at bay?