Some chemicals in sunscreen are killing Hawaii’s coral reefs and a new bill recently passed by Maui legislators bans the sale of certain types of skin protectants.

Chemicals oxybenzone and octinoxate were first identified in 2015 as ingredients that cause bleaching, which turns the colorful corals into dead, white structures.

This process happens when corals become stressed due to changes in temperature, light or nutrients in oceans.

Bill 135, passed on Friday,  recognizes that many non-mineral sunscreens pose a threat to the health of coastal waters, coral reefs and marine species – and is set to be signed into law on October 1, 2022.

Some chemicals in screen are believed to be killing Hawaii’s coral reefs and a new bill passed by Maui officials bans the sale of such skin protectants. Pictured Maui’s Hapuna Beach State Recreation Area

Joshua Zeichner, a board-certified dermatologist in New York City, said in a statement: ‘The term reef safe typically means that the sunscreen contains only mineral UV-blocking ingredients like oxide and titanium dioxide.

‘Both nano particle—a smaller particle size—and traditional zinc oxide sunscreens are both safe and effective, and both will be considered safe for reefs. The only difference is the cosmetic feel on the skin

However, chemical filters can wash off the skin into the water while swimming, snorkeling or even using a beach shower – and the National Park has warned: ‘If it’s on your skin, it’s on the reef!’

Researchers have found oxybenzone concentrations in some Hawaiian waters at more than 30 times the level considered safe for corals, according to Hawaii’s Department of Land and Natural Resources. 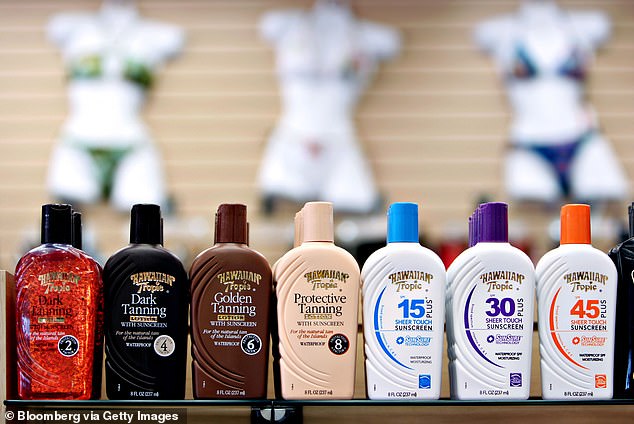 Chemical sunscreens work by absorbing the sun’s rays, while its mineral counterpart does the opposite. The chemical filters can wash off the skin into the water while swimming, snorkeling or even using a beach shower 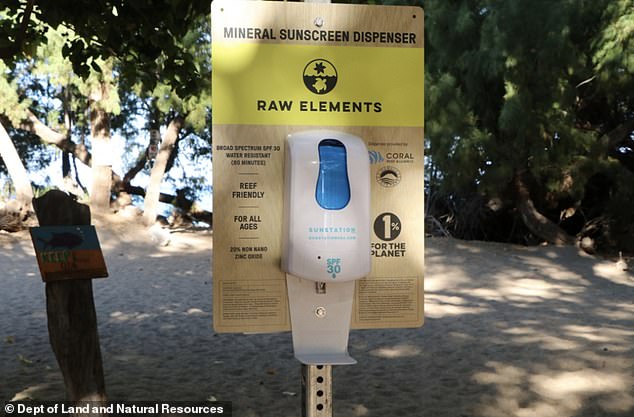 Along with the bill comes a new mineral sunscreen dispenser (pictured) is available to visitors for free at Maui’s Hapuna Beach State Recreation Area. Mineral-based protectants are made with ingredients like zinc or titanium that are deemed safe for corals

Maui is home to nine major coral reef tracts that not only draw in tourists from around the globe, but also protect the island from flooding and act as a natural barrier for rising sea levels.

The National Oceanic and Atmospheric Administration officials said 56 percent of the Maui’s coral was bleached in 2015, along with 44 percent around West Maui and 32 percent near Oahu.

‘These ingredients have been shown to increase the probability of endocrine disruption in marine invertebrate species, such as sea urchins; vertebrate species, including fish such as wrasses, eels, and parrotfish; and mammals, such as in species similar to the endangered Hawaiian monk,’ reads the bill, referring to the chemicals found in non-mineral sunscreens.

‘The active ingredients used in non-mineral sunscreen products in Maui County coastal waters acts as a pollutant, with environmental contamination levels refreshed and renewed, every day, by swimmers and beachgoers.’

The bill prohibits the sale of more than 80 types of sunscreen on the island, unless the sunscreen was prescribed by a licensed healthcare provider.

In place of the toxic sunscreen will be mineral-based protectants with ingredients like zinc or titanium. 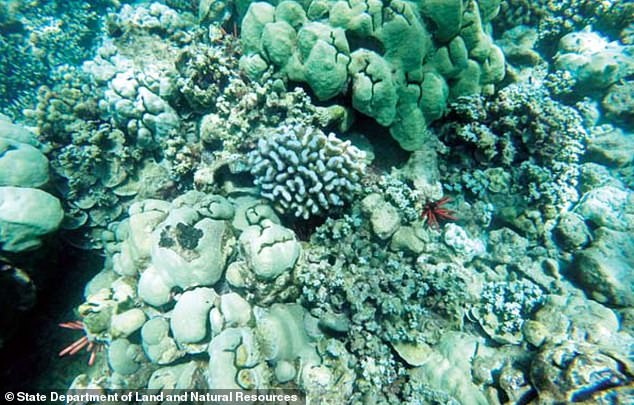 The National Oceanic and Atmospheric Administration officials said 56 percent of the Maui’s coral was bleached in 2015, along with 44 percent along West Maui and 32 percent around Oahu

Dena Sedar, an interpretive specialist with the DLNR Division of State Parks (DSP), coordinated the partnership that funded the sunscreen station at the Waialae section of Hāpuna State Recreation Area on the west coast of Hawai’i Island.

‘Certainly, there has been great progress and increased awareness from both visitors and residents about the damage chemical sunscreens cause,’ Sedar said in a statement.

‘However, I still cringe when I see people applying chemical sunscreens or using aerosols. I want to approach them and explain that this is damaging the very reefs they’re about to snorkel on.’

Corals have a symbiotic relationship with a tiny marine algae called ‘zooxanthellae’ that live inside and nourish them.

When sea surface temperatures rise, corals expel the colourful algae. The loss of the algae causes them to bleach and turn white.

This bleached states can last for up to six weeks, and while corals can recover if the temperature drops and the algae return, severely bleached corals die, and become covered by algae.

In either case, this makes it hard to distinguish between healthy corals and dead corals from satellite images.

This bleaching recently killed up to 80 per cent of corals in some areas of the Great Barrier Reef.

Bleaching events of this nature are happening worldwide four times more frequently than they used to.

An aerial view of Australia’s Great Barrier Reef. The corals of the Great Barrier Reef have undergone two successive bleaching events, in 2016 and earlier this year, raising experts’ concerns about the capacity for reefs to survive under global-warming