With his downturned mouth and signature glare, you’d be forgiven for thinking this dog is having a bad day.

The scruffy dog has won more than 7,000 Instagram followers with snaps capturing his signature unimpressed looks, which followers say reflect their own mood.

Why are you looking at me? Bouche the two-year-old Brussels Griffon always looks grumpy 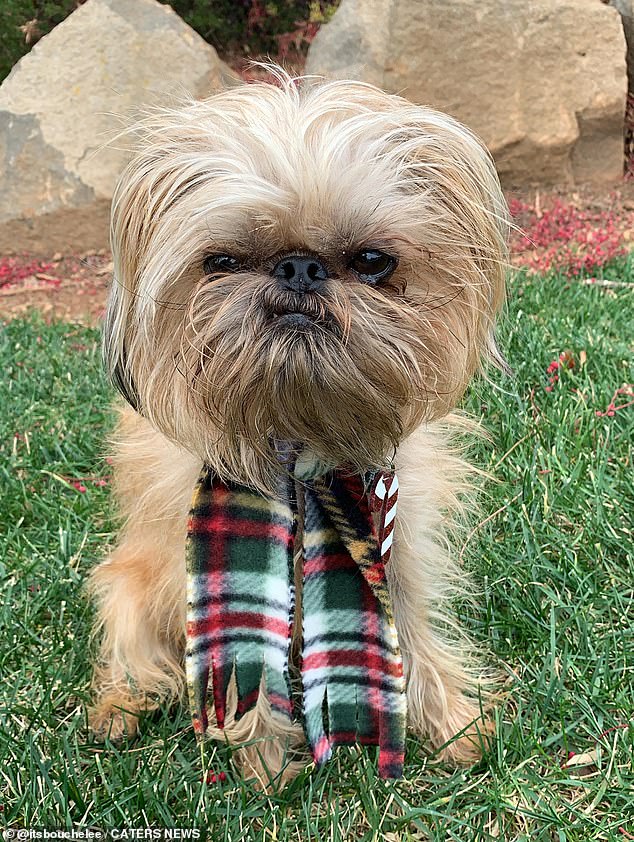 Don’t make me wear this! The two-year-old Brussels Griffon has become an Instagram star 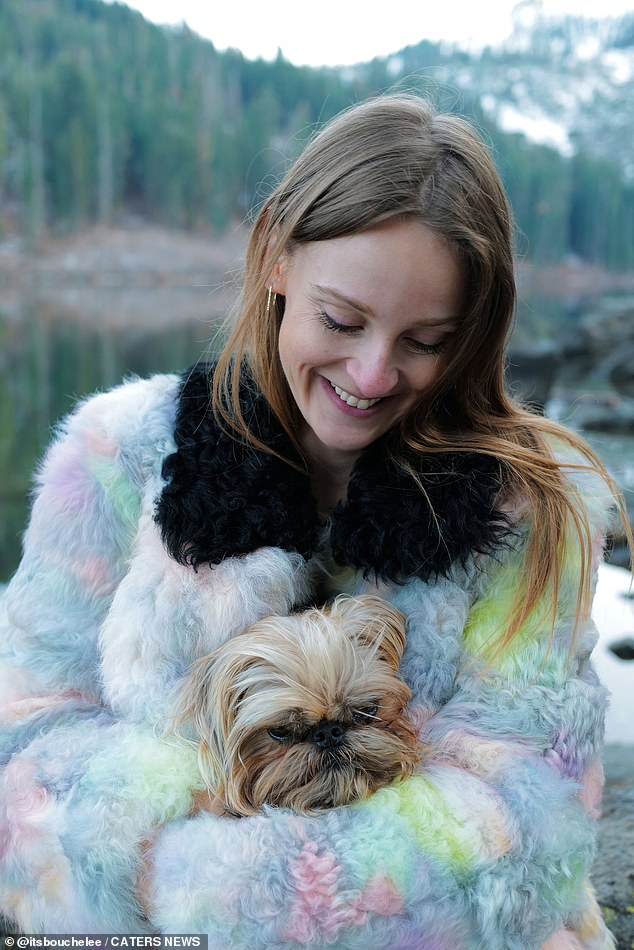 Owner Amanda insists her dog is actually ‘playful’ and happy, despite what his expressions might make you think.

‘He tends to dish me sassy and grumpy expressions typically when he knows he’s being photographed,’ she said.

‘He is very sociable and playful. He has a lot of personality and is quite the character.’

The self-proclaimed ‘dog momager’ first came across the Brussels Griffon breed in 2013. She was immediately attracted to their smart character and signature look.

After searching for a puppy, she found a breeder in Oregon who sent her pictures of the six-week-old puppies. 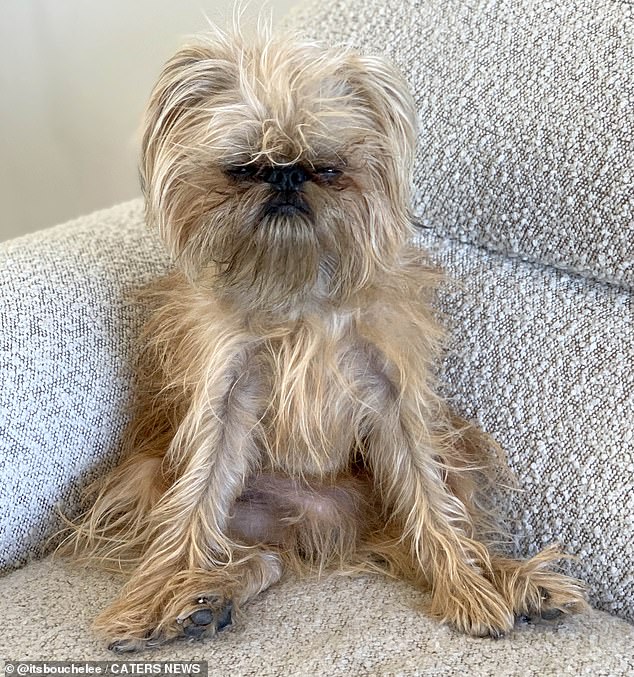 It’s too early! Bouche looks annoyed to have been made to pose on the sofa at home 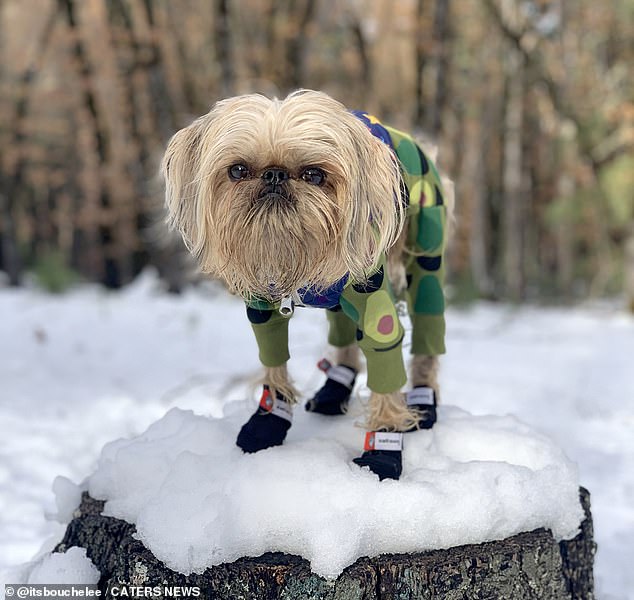 Do I look silly in this? Although he looks a bit chunky, most of his heft is actually fur 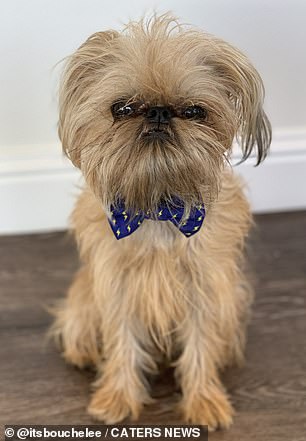 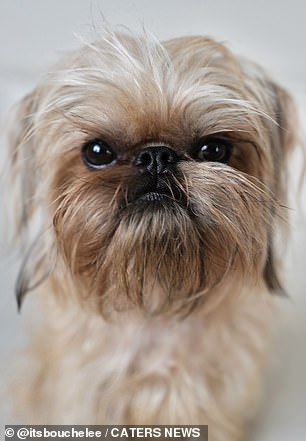 Left: Bouche is pictured looking miserable in a bowtie. The grumpy pooch never smiles for the camera 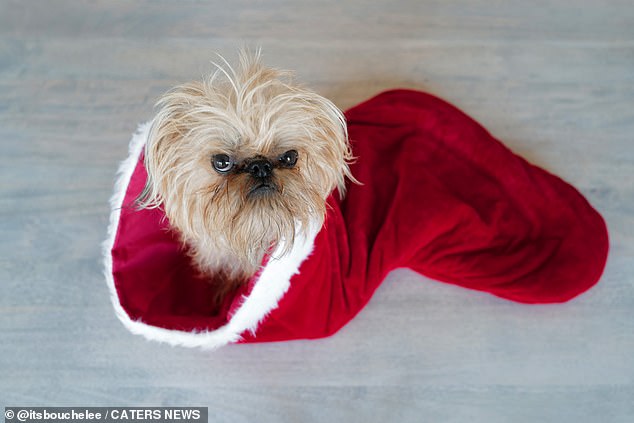 The university lecturer said: ‘It was then that I first laid eyes on Bouche. He was very tiny and looked quite mischievous and grumpy. I knew he was the one and the rest is history.

‘I can’t tell you how many times I’ve heard, “that dog looks like Chewbacca” or “he looks like an Ewok”.’

Strangers are often amused by how grumpy he looks. They comment on how he looks like an old man or that he reminds them of Grumpy Cat.

‘I’ve often encountered people that assume he’s way older than he is because of his grumpy pout and stately beard,’ Amanda said. ‘I frequently have bearded men tell me that his beard is better than theirs.’

Amanda describes Bouche as a ‘mummy’s boy’ and says that he doesn’t like being away from her.

She added: ‘Bouche has a wonderful temperament. He is very sweet and affectionate.

‘Bouche really enjoys cognitive play, puzzle games and agility. For being less than 10 lbs, he’s extremely fast and can jump very high for a little guy of his stature.

‘The beach is definitely his happy place. Despite being a speedy athlete, his appearance sometimes mirrors a sloth, particularly when he sticks his head out of the car window.

‘His slicked back hair coupled with his long gangly limbs and calm expression really does make him look like a sloth.’