Early in lockdown, I did what thousands of Britons did: cleared out the garage. Among all of the junk, I found a pot of black Cuprinol Ducksback 5-year Waterproof paint. So I painted the shed.

Bad move. Instead of using my Ducksback shed paint to, well, paint my shed, I should have hung on to it for a few more weeks, then sold it on eBay for a tidy profit.

At the height of lockdown, we got used to shortages: toilet paper, handwash, flour. One by one, the supermarkets got their supply chains in order and those products returned to the shelves.

DIY mad: Kantar, the retail market analysts, said that in June there was a 48 per cent growth in spend on DIY and garden items in physical stores

But if you’ve been to your local DIY store recently in search of shed paint, you’ll have experienced that empty-shelf feeling all over again.

You might see an own-label tin in such unfashionable shades as Woodland Moss or Forest Green, but I almost guarantee you won’t see any black Ducksback 5-year Waterproof. What about online?

On several websites I used the ‘find stock in your local store’ function to track some down. I live near Chesham in Buckinghamshire – Wickes said it had a tin in Bishop’s Stortford, 55 miles away; Homebase claimed one existed in Maidenhead, a mere 20 miles away.

But could I have been sure that the eager DIY masses of the Thames Valley hadn’t descended on the store and snatched that precious, single tin?

Now, call me a skinflint if you wish, but I have set limits, thresholds, for certain products. So I won’t pay more than £100 for a shirt or £15 for a bottle of supermarket wine. My shed/fence paint threshold is definitely £3 a litre.

What’s happening here? First, we have all gone DIY-mad. Kantar, the retail market analysts, said that in June there was a 48 per cent growth in spend on DIY and garden items in physical stores. That’s year-on year, not from May (when the stores weren’t open).

Painting and decorating, according to Kantar, is the most ‘accessible’ DIY job. This is a kind way of saying even desk-bound numbskulls like me can do it.

Intriguingly, younger DIY-ers are getting stuck in, too: an extra £9million was spent on decorating supplies by pre-family households in June.

Is this a generational shift? The 2003 book How To Mow The Lawn: The Lost Art Of Being A Man was aimed at all those adult males who were hopeless at the things at which their dads were naturally good: mending cars, putting up shelves and, yes, mowing the lawn.

Maybe now the new generation will be showing up their dads. But they won’t be painting their fences black.

Over the four weeks to June 14, 2020, wood paint was brought home from 1.7 million trips, up 110 per cent compared with the same period last year. The figures for July and August are likely to be just as high.

At first, I thought the shortage was simply the old retailer’s trick of pretending they were running out in order to make us desperate for the popular product. 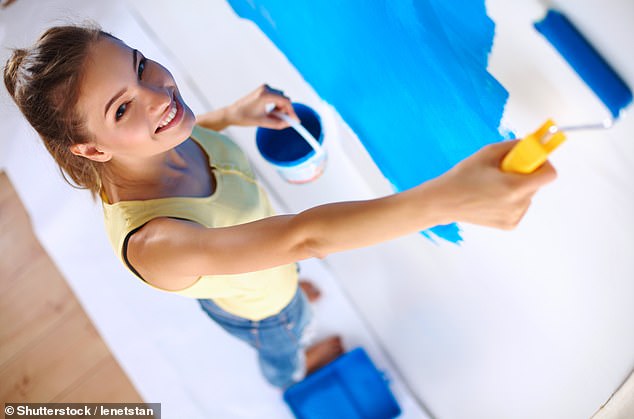 Younger DIY-ers are getting stuck in too: An extra £9million was spent on decorating supplies by pre-family households in June

If so, Cuprinol, a fine old Danish company that’s now part of the AkzoNobel giant, is playing the long game. I invited it several times to talk about the shortage and why its paint should be in such demand, but answer came there none.

My dad, bless him, would have been proud of me. But there’s no room for greens and browns in our shaker/Scandi paradise.

Hang on, though. According to author and TV presenter Georgina Burnett (The Home Genie) fashionistas on Instagram are trying to lure us away from that look.

Despite their best efforts, however, grey, greige, whatever you call it, ‘is not going anywhere’, Georgina reckons.

‘I like green in gardens, but it depends which shade. The darker browns? No.’

She recommends blue as an alternative for that ‘Greek garden’ feel.

And the good news is that Wickes has one tin of Cuprinol Beach Blue left in my ‘local store’. It’s in Glossop, Derbyshire – a mere 130.2 miles away.

What your home really needs… a director’s chair

The director’s chair, a piece enjoying a comeback, was first produced in 1892 by Gold Medal Camp Furniture, a company based in Racine, Wisconsin, in the U.S.

But this wood-and-canvas folding chair rose to fame in Tinseltown, California, where it became popular among silent movie directors, who required lightweight seating that could be easily moved around sets. 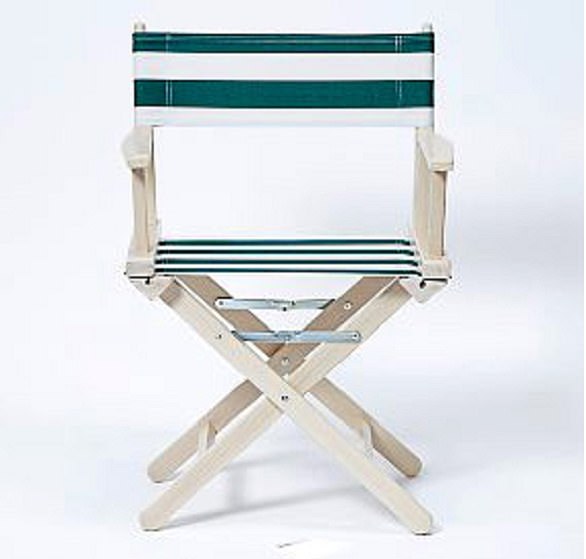 Back in fashion: The director’s chair

The celebrated director Cecil B. DeMille even employed a (female) director’s chair boy, a person solely responsible for his chair.

It has remained an essential part of movie-making, with producers, directors and stars each having their own personalised seat. So why is the director’s chair back in fashion, and why does your home need one?

Convenience is one reason: these chairs can be used indoors and out.

Cost is another factor. A pair of blue-and-white-striped chairs costs £50 at Wilko (wilko.com), while Homebase (homebase.com) has a pair of smart green ones for £90.

The Conran Shop has a more high-budget number, pictured, (£125, conranshop.co.uk) or for a personalised design in classic black, head to Amazon (£89.99, amazon.co.uk). Hurray for Hollywood!