EXPRESS INFORMER > Health & Medicine > Has the world won the war on Covid? Global virus deaths have plummeted 90% since February

Has the world won the war on Covid? Global virus deaths have plummeted 90% since February

Covid deaths have plunged nearly 90 per cent globally since February — in a sign the world is finally winning the pandemic fight.

There were 9,400 fatalities from the virus last week compared to more than 75,000 every seven days in early February. This is also the lowest level since Covid started to take off in March 2020.

World Health Organization chiefs — who compiled the data — said in a press conference the figures were a ’cause for optimism’ and showed the world had ‘come a long way’.

But they insisted that the current death tally was ‘10,000 too many’, and maintained that Covid was ‘still a pandemic’.

America is recording the most weekly Covid deaths out of any nation at 2,000 every seven days on average, and the third highest number of cases per week.

But cases and death counts are massively skewed by the number of tests carried out.

Despite America’s relatively high death count, virtually all Covid restrictions have been abandoned in the US, with President Joe Biden declaring in September the pandemic was ‘over’.

Many left-leaning scientists — including Dr Anthony Fauci — were quick to undermine the president, claiming that there was still work to be done.

The above graph shows Covid deaths by week in the US (green line) and globally (blue line). It reveals that fatalities have plateaued in America since April. Globally they are also far lower than in February 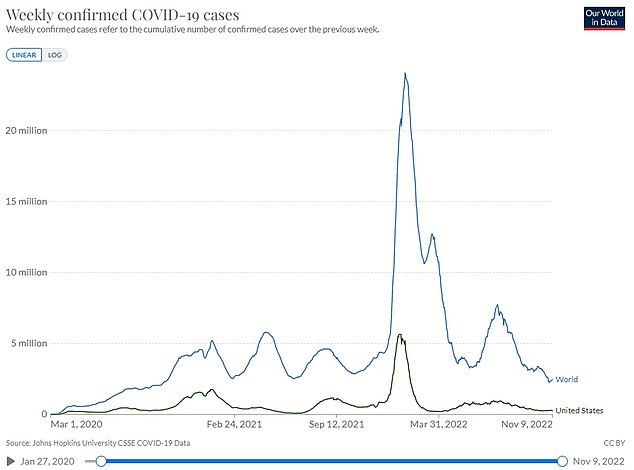 This graph shows weekly cases detected in both the US (green line) and world (blue line). It shows that cases in the US have also plateaued since last winter

Dr Anthony Fauci has warned America is at a Covid ‘crossroad’ and claims the current level of virus deaths is ‘unacceptable’.

The government’s top infectious disease doctor said Americans should not be lured into a false sense of security because Covid stats have been deflating since spring.

While he accepted the declining numbers as progress, Dr Fauci said he expects a harsh winter with high infection levels and new variants of the virus.

‘We’re really at a point that may be a crossroads here,’ Dr Fauci said in a radio interview.

‘As we’re entering into the cooler months, we are starting to see the emergence of sublineage variants of omicron.’

He added: ‘We’re still in the middle of this — it is not over — 400 deaths per day is not an acceptable level. We want to get it much lower than that.’

Dr Fauci expects the new Omicron subvariants to render antibody therapies such as Evusheld completely useless — in a worrying sign for immunocompromised patients.

He also warned US hospitals face a ‘negative trifecta’ this winter as flu and RSV cases soar to unseasonably high levels.

The WHO’s director-general Dr Tedros Adhanom Ghebreyesus told a press conference: ‘We have come a long way, and this is definitely a cause for optimism.’

But he also urged everyone to ‘remain vigilant’ for new Covid variants, and spikes in cases or deaths.

Maria van Kerkhove, the WHO’s technical lead on Covid, also insisted during a press conference that Covid is ‘still a pandemic, it is circulating quite rampantly around the world.’

The WHO has no hard and fast definition for when a pandemic should be declared over.

The judgement is made by a panel, based on cases, deaths and vaccination rates, as well as social and political factors.

China is still using brutal lockdowns to curb the spread of the virus, showing that while most of the West is learning to live with the virus, some countries are still struggling to adapt.

Weekly US fatalities have remained at around 2,000 and 3,000 since late April, and there is no sign at present they are about to take off.

The lowest weekly Covid fatality recorded to date was over the seven days to July 7 when the US registered about 1,500 deaths in a single week.

When the virus first emerged people had no natural protection against the disease.

But with the advent of Covid vaccines and an ever-growing number of infections a wall of immunity has built up against the virus.

This has severed the link between surging cases and a subsequent rise in fatalities.

He added that Americans should not be lured into a false sense of security because Covid stats had been deflating since the spring.

‘We’re really at a point that may be a crossroads here,’ Dr Fauci said in a radio interview.

‘As we’re entering into the cooler months, we are starting to see the emergence of sublineage variants of omicron.’

He added: ‘We’re still in the middle of this — it is not over — 400 deaths per day is not an acceptable level. We want to get it much lower than that.’