If anyone doubts that women bosses can bring more zip to a business than their male counterparts, look no further than Burberry. The luxury goods group reinvented itself and flourished under two successive American female chief executives.

However, it has failed to find the same pizzazz under the men who later took charge, despite their outsized pay packets.

In the period when male leaders have presided over the brand, the shares have dramatically underperformed their European rivals by rising 35 per cent, while shares in LVMH, the Paris luxury goods powerhouse, have soared 400 per cent.

The most recent sales figures a couple of days ago showed Burberry still lagging behind its peers, when its interim results recorded an 11 per cent rise in sales compared to 2021. That contrasts with a 19 per cent rise at LVMH and 23 per cent at Kering, the owner of Gucci.

The transformation of Burberry began back in the Cool Britannia years when Rose Marie Bravo was responsible for shaking off a fusty aura of dowdy raincoats and chequered scarves.

She brought the brand to the catwalks in the fashion capitals of the world and made its distinctive check ultra-modish.

Her approach was almost too successful for its own good. For a time in the early to mid-noughties, the brand became a favourite with fans on football terraces, kitted head to foot in its baseball caps and cashmere sweaters. In 2002, EastEnders actress Danniella Westbrook was photographed with her toddler daughter decked in head-to-toe matching check, with kilts, a bag and even a pushchair. The brand was ubiquitous, but moving dangerously downmarket.

Enter Angela Ahrendts in 2006, a second American superwoman who was highly successful. She raised the snob value – and the prices – in a strategy to tone down an increasingly brash image.

Bravo and Ahrendts are credited with what became known in the fashion trade as ‘doing a Burberry’ – revitalising a fading brand steeped in British heritage, and making it a global fashion house. It was an audacious revival, but unfortunately one that has run out of steam since Ahrendts left in 2014 to take a top job at Apple.

The stratospheric pace slowed significantly under her successor Christopher Bailey.

While Ahrendts was in power, annual sales increased threefold to £2.3billion and profit rose 280 per cent to £444million. The two-year period when Bailey was in charge proved less stellar. Hailed as a design genius, he had virtually no boardroom experience when he was appointed as chief executive of what had become a FTSE100 company, and he failed to impress. 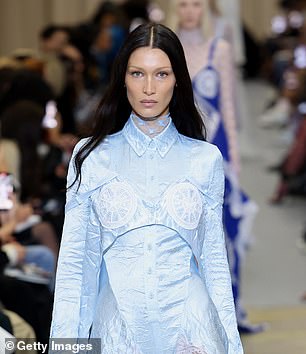 All change: Bella Hadid in next summer’s range

The City baulked at his £8million pay packet in June 2015, which was dished out despite the shares falling sharply. He stepped down, to be replaced in 2017 by Marco Gobbetti, a hotshot from haute fashion house Celine. Performance under Gobbetti was respectable, but far from explosive.

Luca Solca, an analyst at broker Bernstein, said the brand ‘hasn’t been particularly original’ over the past five years and ‘has become a bit of a streetwear brand’.

The Italian left to take a job at Salvatore Ferragamo in January.

He was replaced by the current chief executive Jonathan Akeroyd, hired from Versace late last year with a golden hello of £6million.

Akeroyd has a task on his hands to make the label relevant to big spenders again.

He also wants to broaden its appeal and bring back some of the ‘Britishness’ that catapulted the brand into the hearts of fashionistas around the world.

New chief creative officer, Yorkshireman Daniel Lee, who was born in Bradford and was previously at Italy’s Bottega Veneta, arrived last month to help the label reconnect with younger shoppers. His plan is to help ‘strengthen connection with British design, craft and culture’.

So has this male duo alighted on the elusive formula to emulate their female predecessors?

Bravo, who was poached from the US department store chain Saks Fifth Avenue, brought a heady mix of fashion sense and commercial nous to the brand. 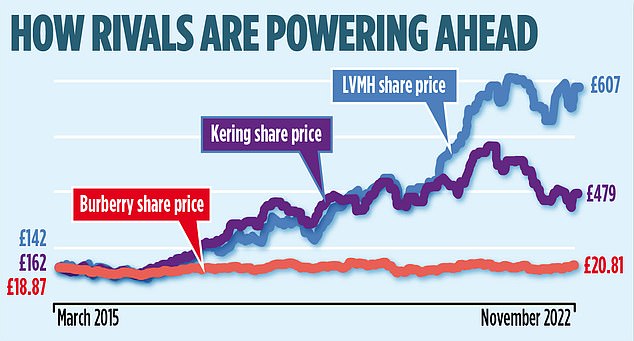 Ahrendts, who would become the highest paid boss in the FTSE100, downplayed the check and took a more discreet approach.

She drew on other aspects of the design history of the company, whose trench coats were invented during the First World War, when they were worn by officers.

She also focused on the ‘equestrian knight’ motif dating back to 1901 and launched the high fashion Prorsum range.

In doing so, she took the brand to a more rarefied and richer clientele, while not alienating mainstream shoppers. Sales climbed ever higher.

More recently, Burberry has made some blunders. Burning unsold products, a practice it finally stopped in 2018, made it unpopular with environmentally conscious fashionistas.

That could, at least in part, be one of the reasons that Burberry seems to have lost a connection with younger shoppers. 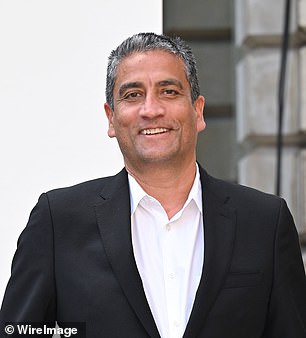 It also discounted its wares heavily at the start of the pandemic when other luxury brands held the line, which some analysts say may have damaged its cachet.

Akeroyd has a history of turbocharging brands. He ran the Alexander McQueen fashion house for more than a decade and brought it into a new era.

He restored a struggling Versace, where he arrived in 2016, to profitability and sold it to US giant Michael Kors.

‘He seems to have a clear vision for making Burberry a bigger player in the accessories market, which has been growing strongly and is currently supporting growth at other luxury labels,’ says Neil Saunders, managing director at the consultancy GlobalData Retail.

But he added that Akeroyd’s plan to reassert Britishness and kickstart a new era would not come easily, saying that the vision of making the brand feel distinct from other fashion houses was going in the right direction, but would ‘take some time to pull off’.

It all sounds encouraging, but is the brand missing some of the female flair that made it great?

‘The group is missing some flair, full stop,’ said Saunders. ‘It doesn’t necessarily need to come from a woman – although understanding the female shopper is vital regardless of who is at the helm.

‘I would hope that female leadership does feature in their plans so that all of Burberry’s customers have a voice at the top table.’