Harvey Weinstein was sued on Friday by the former Project Runway production assistant he was convicted earlier this year of having sexually assaulted.

Miriam Haley, who has also used the name Mimi Haleyi, is seeking unspecified damages for the ‘pain, suffering and economic injuries’ she says the disgraced movie mogul caused by assaulting her in July 2006.

Haley lives in London but the civil lawsuit was filed in the US District Court in New York.

‘Weinstein’s sexual attack on Ms Haley scarred her deeply, mentally and emotionally,’ the lawsuit states, according to Variety.

‘It stripped her of her dignity as a human being and as a woman. It crushed her confidence and faith in people and in herself.’

Attorneys for Weinstein did not immediately respond to requests for comment.

Miriam Haley testified earlier this year that Harvey Weinstein forced oral sex on her in a New York City apartment in 2006. Pictured: Haley at a news conference in New York, October 2017 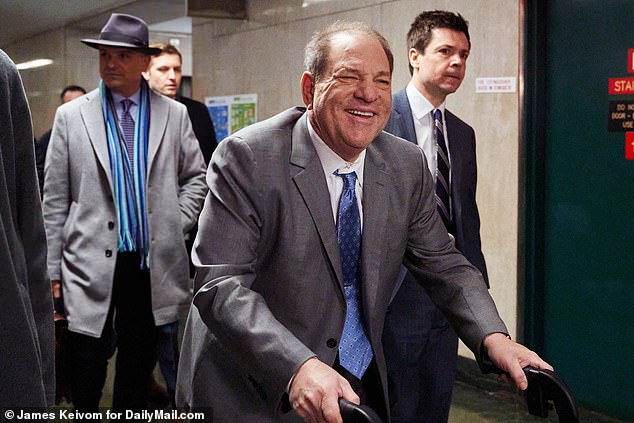 In February, Weinstein was convicted of the assault, and of third-degree rape of another woman, and sentenced to 23 years in prison. Pictured: Weinstein arrives at Manhattan Criminal Court for his sexual assault trial in New York, February 2020

Haley testified in January 2020 that she met Weinstein while working on Project Runway, a television show his company produced.

She said she agreed to meet with him on July 10, 2006, in his apartment in Manhattan’s SoHo neighborhood.

In her testimony, she said they were sitting on a sofa making small talk when Weinstein lunged at her, prompting her to jump up and say: ‘Oh, no, no, no.’

Haley said he then backed her into a bedroom, held her down on a bed, and forced himself on her orally.

She also claimed he raped her at the TriBeCa Grand Hotel two weeks afterwards.

‘I did reject him, but he insisted. Every time I tried to get off the bed, he would push me back and hold me down,’ Haley said through tears.

Weinstein was convicted in February of sexually assaulting Haley and of third-degree rape of another woman, Jessica Mann, in March 2013.

He is now appealing his 23-year sentence in a New York State prison, of which 20 years stems from Haley’s allegation.

The lawsuit restates the rape allegation, but says Haley is seeking compensation for just for the first incident. 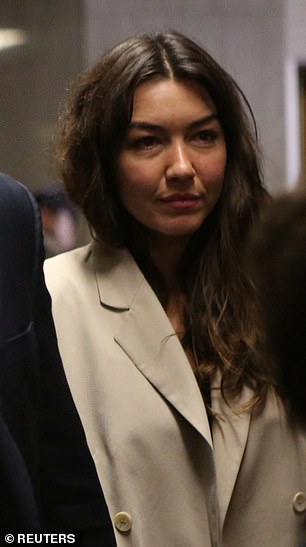 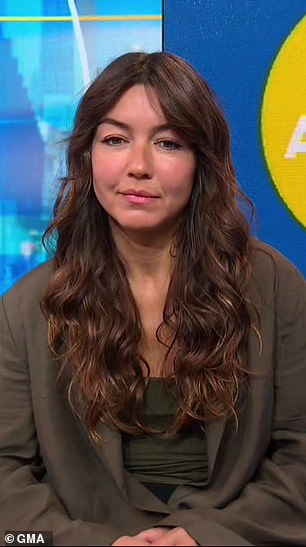 On Friday, Haley (left and right) filed a lawsuit in New York seeking unspecified damages for the ‘pain, suffering and economic injuries’ from the assault. She has also accused Weinstein of raping her, but is not seeking damages from that incident 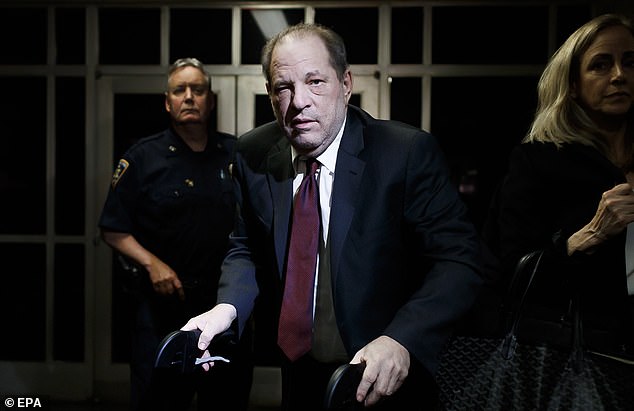 Weinstein, 68, has been fighting to overturn his conviction, with his lawyers stating he is broke and will die in prison if not released. Pictured: Weinstein departs New York State Supreme Court following a third of jury deliberation in his sexual assault trial, February 2020

Weinstein ‘has completely failed to acknowledge his criminal misconduct’ and ‘shown no sign of true remorse,’ Haley said in a statement provided by her attorney, Gloria Allred, according to Variety.

‘He should be held fully accountable.’

A Delaware bankruptcy judge overseeing the liquidation of Weinstein’s former film studio is expected to consider a liquidation plan that would provide about $17 million in compensation to Weinstein’s accusers.

Earlier this month, Weinstein’s attorneys argued that he is broke and will die in prison if he is not released, his attorney said during a hearing on Friday.

‘[Weinstein’s] physical and mental condition has so deteriorated, I do not think it’s an overstatement to say that if he is not released as part of this application, his chances of surviving in prison are rather low,’ Kamins said, according to Page Six.

‘The defendant is almost blind, and he’s not ambulatory, and he’s on 20 medications.’ 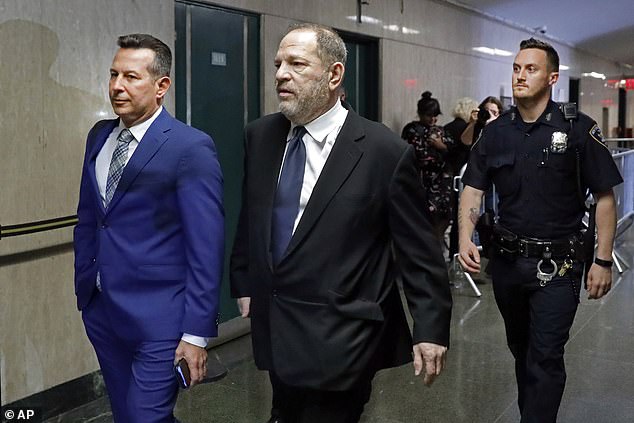 The disgraced movie mogul is facing a trial in Los Angeles of 11 counts, including rape and sexual battery. Pictured: Weinstein returns from lunch to State Supreme Court, in New York, April 2019

Kamins added that Weinstein is currently wheelchair-bound and suffers from a number of medical conditions.

Manhattan Assistant District Attorney Joan Illuzzi-Orbon said she does not believe Weinstein is broke, citing that he recently sold a $60 million property.

She argued that if he were released from prison, he would have motive to flee and has the resources to do so.

‘Basically, the time he stands to do on [the Los Angeles] case is serial-killer time,’ she said, in reference to the Weinstein facing up to 135 years in prison, according to Page Six.

‘He is a man of extraordinary means, more so than any defendant I have ever prosecuted.’