The Harvard neuroscientist who came under fire last month for stitching infant monkeys’ eyes shut is again being condemned by her peers for another experiment that ripped baby monkeys from their mothers immediately after birth.

‘Triggers for mother love,’ the study published in September, was conducted by Margaret Livingstone who removed the infants before mothers woke from anesthesia to see how the adult monkeys would react.

The issue raised by scientists and animal rights activists is that the infants without maternal nurturing endure long-term effects, including excessive fear, aggression and abnormal reproductive behaviors.

A letter signed by more than 250 scientists to PNAS, the journal that published the study, is calling for the paper to be removed and criticizes Harvard Medical School for allowing experiments that ‘induce irreversible harm on infant primates’ to continue.

The September study built on previous research that baby monkeys separated from their mothers form lasting attachments to inanimate surrogate mothers, as long as the ‘surrogate’ has soft texture.’

And Livingstone and her team wanted to see if this was the same for mother monkeys.

The experiments involved a total of five different female monkeys, which all had their infants removed immediately after birth and replaced with a stuffed toy.

Livingstone explains that three of the females adopted the soft toy and carrier it for a week or several months, while the other two showed ‘no interest in any toy nor any distress after waking up from anesthesia.’

However, an eight-year-old primiparous female rhesus macaque, monkey Ve, delivered a stillborn that she carried around on her chest – not realizing it was dead.

Livingstone had to remove the lifeless body for it to be examined by veterinarians while the mother was lightly anesthetized.

‘When she recovered a few minutes later, she exhibited significant signs of distress: She vocalized loudly and constantly and seemed to be searching agitatedly around her enclosure,’ reads the study. 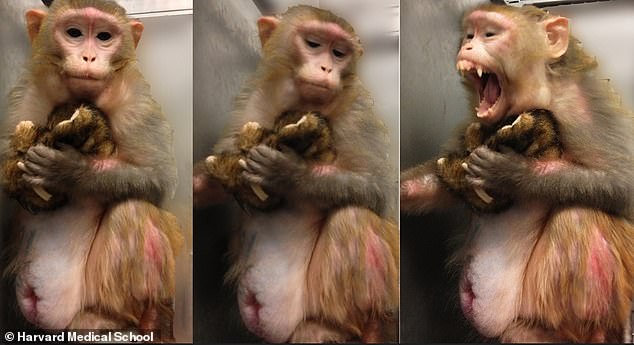 ‘Other monkeys housed in the same room also began to vocalize and became agitated.’

Again, a stuffed animal was placed in the cage and calmed the female almost immediately.

This controversy has notably provoked strong responses in the scientific community, particularly from animal behavior researchers and primatologists, said Alan McElligot of the City University of Hong Kong’s Centre for Animal Health and a co-signer of the PNAS letter.

He told AFP that Livingstone appears to have replicated research performed by Harry Harlow, a notorious American psychologist, from the mid-20th century.

Harlow’s experiments on maternal deprivation in rhesus macaques were considered groundbreaking, but may have also helped catalyze the early animal liberation movement.

‘It just ignored all of the literature that we already have on attachment theory,’ added Holly Root-Gutteridge, an animal behavior scientist at the University of Lincoln in Britain. This means the

Livingston and Harvard, for their part, have strongly defended the research.

Livingstone’s observations ‘can help scientists understand maternal bonding in humans and can inform comforting interventions to help women cope with loss in the immediate aftermath of suffering a miscarriage or experiencing a still birth,’ said Harvard Medical School in a statement. 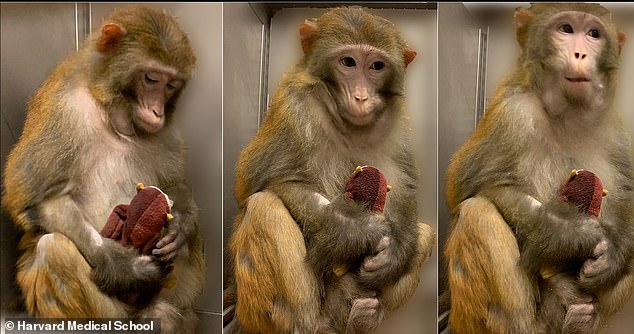 The experiments involved a total of five different female monkeys that were given a toy after their babies were taken away. The issue raised by scientists and animal rights activists is that the infants without maternal nurturing endure long-term effects

However, this is not a welcomed statement among other scientists and animal activists who are calling not only for the paper to be retracted, but for Harvard to shut the lab down.

It continues to explain that these infants are found to exhibit excessive fear, along with aggression and produce more stress hormones than those not taken from their mothers.

The letter continues to note sleeping problems and inflicting self-injuries have also been observed.

‘We ask that members of the HMS IACUC re-review the procedures being followed in this laboratory and urge you to revoke permissions from Livingstone for her experimental protocols involving primate infants, given the short- and long-term damage that they are causing these monkeys and the probable deleterious effect on research data,’ the letter concludes. 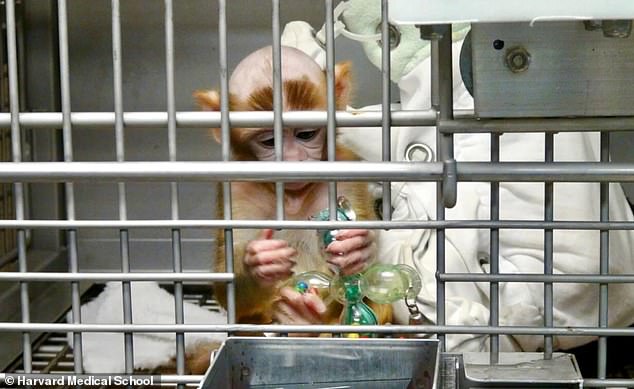 A letter signed by more than 250 scientists to PNAS, the journal that published the study, is calling for the paper to be removed and criticizes Harvard Medical School for allowing experiments that ‘induce irreversible harm on infant primates’ to continue

Livingstone made headlines last month when it was found in 2016 and 2020 she had stitched infant monkey eyelids closed in the name of studying vision disorders.

Livingstone declined to comment on the matter when asked by DailyMail.com, but shared a public statement where she denounces the attacks, highlighting that her lab has ‘not performed eyelid closures since the two isolated cases in 2016’ – she also states that the method ‘remains routine protocol across research labs that study vision disorders.’

The studies brought back memories of the infant monkey Britches that was rescued from the University of California, Riverside in 1985.

The monkey was removed with 700 animals in an overnight raid, but members of the Animal Liberation Front found Britches had a sonar device attached to his head that released a high-pitched screech every few minutes and bandages were wrapped around his eyes.

When the bandages were removed, the animal advocates found his eyes had been sewn shut.

In Livingstone’s statement, however, she notes that in 2016 they ‘performed two reversible eyelid-closure procedures in macaques using dissolvable sutures, as described in the peer-reviewed literature.

‘This procedure is also performed in human children and infants with certain eye tumors or to treat invasive eye infections.

‘Pediatric surgeons give these children anesthesia and pain-relief medications.

‘We did the same with our infant macaques to ensure they do not experience pain.’