Councillors have been accused of ‘virtual-signalling gone crazy’ after insisting on adding a plaque to Hartlepool’s monkey statue over fears it could be used to depict the town as ‘unfriendly to foreigners’ in the wake of the Black Lives Matter protests.

Legend says the monkey was hanged as a French spy after being washed ashore at the seaside town in County Durham following a shipwreck during the Napoleonic Wars.

Hartlepool United’s mascot is called H’Angus the Monkey in tribute, and a man wearing his costume was famously elected mayor of the town three times after standing on a platform of ‘free bananas’.

But the monkey’s statue – which is located in the town’s marina – will now be fitted with an explanatory plaque over fears it could be ‘misused by those with differing agendas to portray Hartlepool as unfriendly towards foreigners’.

Legend says the monkey was hanged as a French spy after being washed ashore at the seaside town in County Durham following a shipwreck during the Napoleonic Wars. A statue of the animal is located in the town’s marina

The conclusion was contained in a report – seen by The Telegraph – which was commissioned by Hartlepool Borough Council on links between statues and ‘the slave trade, colonialism, and imperialism’ began after the BLM protests.

Historian Dr Zareer Masani criticised the move: ‘This is an example of tragedy ending as farce, virtue-signalling gone crazy.

‘As this legend is probably a myth, will we be searching the Greek classics next for xenophobia?’

But Conservative Councillor Gordon Cranney said he had ‘no objection’ to the context of the monkey story being explained on a plaque to make it clear it had nothing to do with race.

He told MailOnline: ‘It was a made up rumour. Hartlepool used to be split in two, West Hartlepool and then Old Hartlepool, so it was one mocking the other.

‘Now we are classed as the monkey hangers, so I can understand that people can find that racist, but it is absolutely nothing to do with race – it’s an old wives tale.

‘So I’ve got no objections to the story being explained.’

The June 2020 report, which reviewed all monuments and street names, warned that the monkey statue – which includes a bowl to collect coins for a local hospice – ‘could be perceived negatively by some’.

A new plaque is expected to make it clear that the incident is most ‘not a factual event’.

The council declined to say whether it was concerned about the monument being used by BLM supporters to paint the town as racist, or by the far-right. 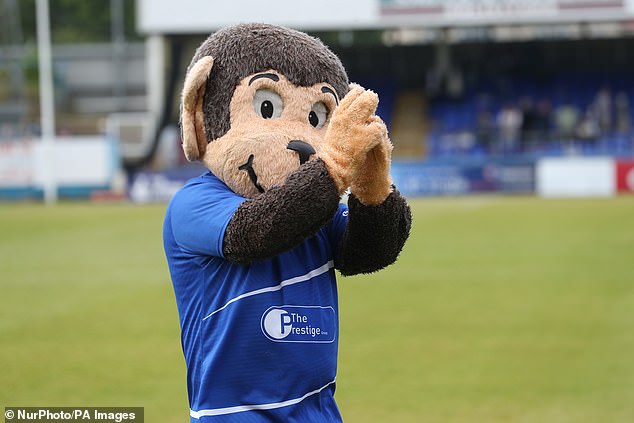 Hartlepool United’s mascot is called H’Angus the Monkey in tribute, and a man wearing his costume was famously elected mayor of the town three times after standing on a platform of ‘free bananas’

The primate hanged for being a spy: What is the Hartlepool monkey story and is there any truth to it?

Hartlepool is famous as the place where a monkey was hanged by locals after being mistaken for a French spy, but whether the incident ever actually happened is up for debate.

The story goes that the monkey was the only survivor from a shipwreck during the Napoleonic Wars, when fears of a French invasion were at their height.

Having never seen a Frenchman before, locals mistook it for a ‘hairy French spy’ and put it to death on the beach.

The legend led to the townsfolk being branded as ‘monkey hangers’, but they in turn embraced the story.

But is it actually true? “There is no evidence whatsoever that the people of Hartlepool hanged a monkey,” said Keith Gregson, a local historian, told the BBC.

The story was first mentioned in a 1855 song by Edward ‘Ned’ Corvan, a Victorian travelling performer whose performances included mocking whichever town he was in.

Some aspects of the legend appear to crib from another story about a baboon who is believed to have visited Newcastle with some Cossack soldiers in 1825.

Hartlepool Borough Council itself accepts that the monkey story is ‘not a factual event’.

A spokesman said: ‘We are currently working on an interpretation of the Hartlepool monkey legend with the intention of installing an explanatory sign or plaque on the monkey statue at the Hartlepool Marina lock gates.’

The council report made a number of other tendentious comments, including noting that a statue of Andy Capp, a comic strip character created by Reg Smythe, a local cartoonist, could be criticised for portraying a stereotypical northerner.

Hartlepool recently elected a Tory MP, Jill Mortimer, for the first time since the 1970s.

The fate of statues with links to colonialism or the slave trade has generated intense controversy after some were targeted by left-wing protesters.

A paint-spattered statue of slave trader Edward Colston was recently installed lying down at a Bristol museum after being torn down and thrown in the harbour during a pro-BLM protest last summer.

However, a statue of Cecil Rhodes above Oriel College in Oxford was recently spared the chop after officials noted ‘considerable obstacles’, including financial costs and ‘complex’ planning processes

An independent inquiry to examine Rhodes’ legacy was set up in June in the wake of BLM protests after the governing body ‘expressed their wish’ to remove the statue from outside the college.

A majority of members on the Commission supported the college’s original wish to remove the Rhodes’ statue, but there was a substantial backlash from donors.

But Oriel College said: ‘In light of the considerable obstacles to removal, Oriel’s governing body has decided not to begin the legal process for relocation of the memorials.’ 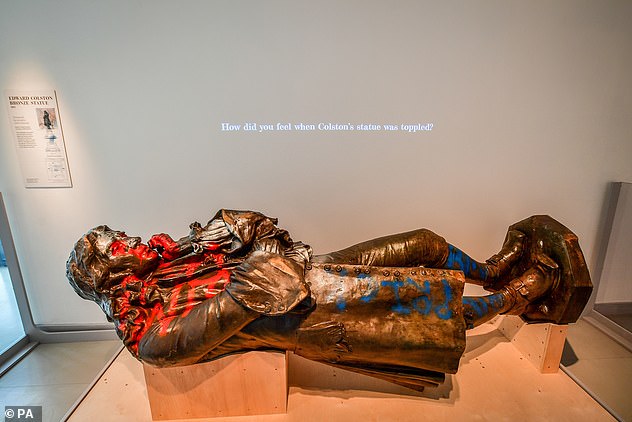 The fate of statues with links to colonialism or the slave trade has generated intense controversy after some were targeted by left-wing protesters. A paint-spattered statue of slave trader Edward Colston was recently installed lying down at a Bristol museum after being torn down and thrown in the harbour during a pro-BLM protest last summer

It came as new Church of England guidance, published last month, urged churches and cathedrals to consider the history of their buildings and the physical artefacts and how it could impact their congregations’ worship.

Memorials to politicians, war heroes and authors all targeted due to links to slavery and racist beliefs

Since Edward Colston’s statue was thrown into Bristol Harbour, there has been a wave of attacks from vandals on various monuments across Britain.

A statue to Winston Churchill was defaced with the words ‘was a racist’ and ‘f*** your agenda’ written underneath the memorial to the war time PM in Westminster Square, London.

Slave trader Robert Milligan’s was covered with a shord and the message ‘Black Lives Matter’ was placed on it in West India Docks amid calls for it to be taken down. It was later removed by Tower Hamlets Council. 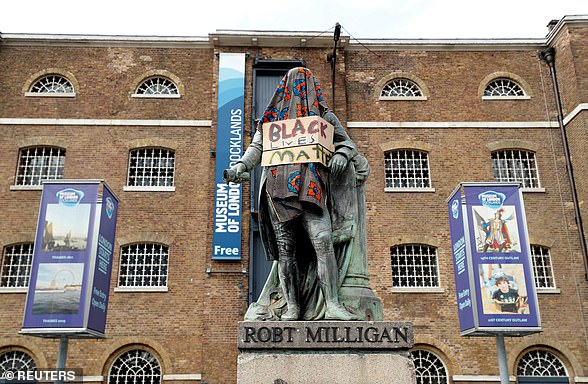 Less than a year after it was erected, ‘Nazi’ was scrawled underneath a statue of Nancy Astor, the first woman to take a  seat in Parliament, in Plymouth.

A monument to 19th-century politician Henry Vassall-Fox, the third Baron Holland, was left splattered with red paint in Holland Park. A cardboard sign reading ‘I owned 401 slaves’ was perched in the bronze statue’s arms, with the number painted on the plinth alongside red handprints.

A Grade II-listed monument to Admiral Lord Nelson, Britain’s foremost naval hero, which stands in the grounds of Norwich Cathedral, was sprayed with a black ‘V’ in the middle of a circle – an anarchist symbol.

In Kent, a former councillor wrote ‘Dickens Racist’ outside a museum dedicated to the beloved 19th century author. Letters sent by the Oliver Twist author showed he wished to ‘exterminate’ Indian citizens after a failed uprising.

A statue of Civil War leader Oliver Cromwell in Wythenshawe Park, Manchester, had the words ‘Cromwell is a cockroach,’ ‘f*** racist’ and the Black Lives Matter acronym ‘BLM’ scrawled across it last month. Thousands of people were massacred during the Cromwellian conquest of Ireland.

BLM was also scrawled across the Worcester Civil War memorial in Royal Park.