Prince Harry has made several revelations in his memoir Spare – including that he first took cocaine at the age of 17.

He revealed that he was offered the class A drug while at someone’s house during a shooting trip – and also experimented with cannabis and magic mushrooms.

While the revelations have shocked some royal fans, it was no secret that Harry once had a reputation for being something of a party animal. He also had an on-and-off smoking habit, which he was reported to have given up when he met Meghan.

With reports of booze-fuelled trips abroad and regular nights out at Mayfair club Mahiki, the Duke of Sussex was the ultimate royal party boy.

Prince Harry, pictured at the Chinawhite club in central London, was often pictured on boozy nights out in his teens and 20s

The King’s youngest son was often splashed across the front pages of newspapers stumbling out of nightclubs and getting up to mischief.

His antics were of such concern to the Royal Family that in 2002, five years after the death of his mother Princess Diana, then 17-year-old Harry visited a rehab clinic in Peckham, south-east London. 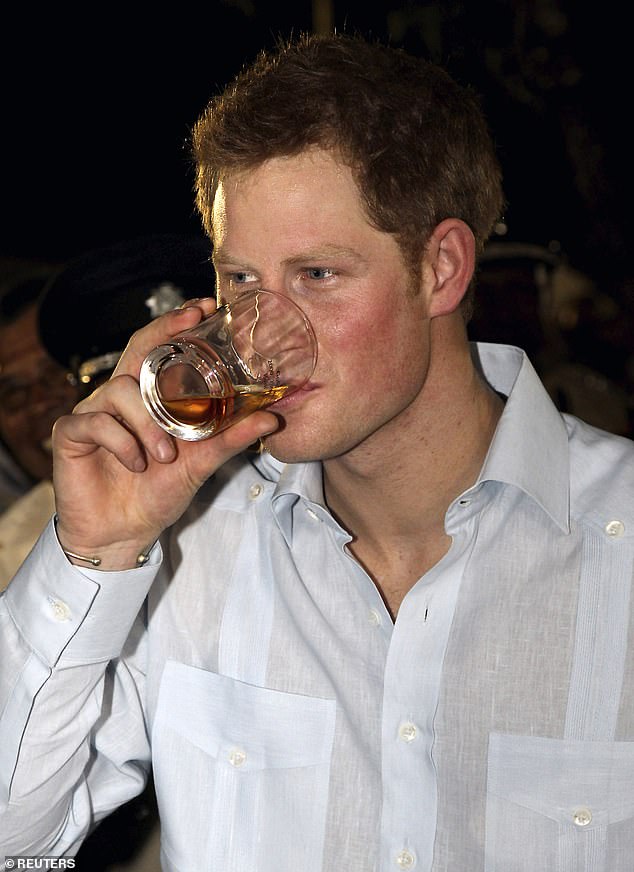 Harry, pictured enjoying a drink in Belize in 2012, reportedly enjoyed booze-fuelled trips abroad when he was younger

King Charles was said to be concerned after his youngest son admitted to smoking cannabis and drinking alcohol at private parties in Highgrove.

It is reported that Harry was taken to the centre, called Featherstone Lodge, for the day to give him a ‘short, sharp shock’.

After the reports emerged, a spokesman for St James’s Palace told the News of the World: ‘This is a serious matter which was resolved within the family, and is now in the past and closed.’

The Mail on Sunday reported at the time that Harry had been involved in a police investigation at the Rattlebone Inn near Malmesbury, Wiltshire. It was thought the young prince had become involved in a mock fight and also allegedly swore at a French employee.

The landlady of the pub had told the newspaper Harry was ‘barred’ and ‘everyone knows’ it – however she later told the PA news agency that any and all members of the Royal Family were welcome on the premises.

However, Harry’s partying habits remained with his antics often caught on camera over the years as he struggled with the limelight. 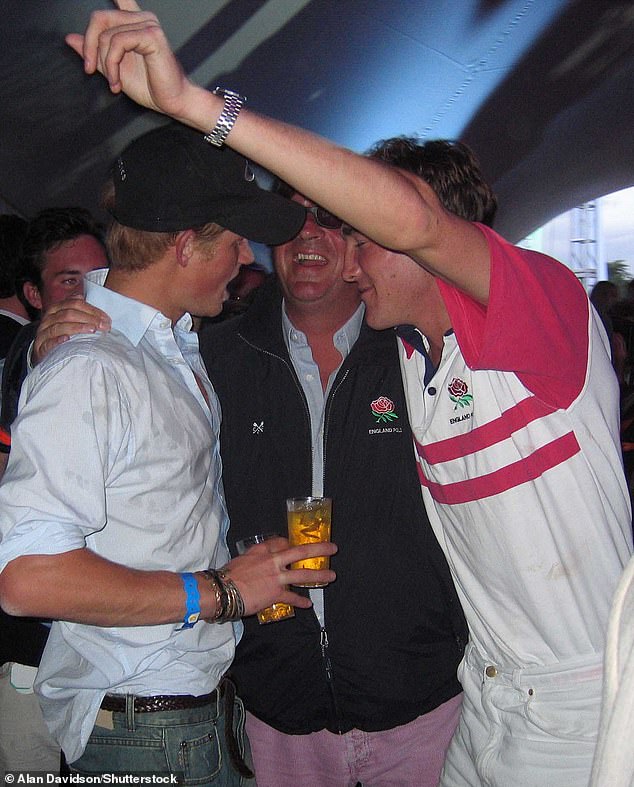 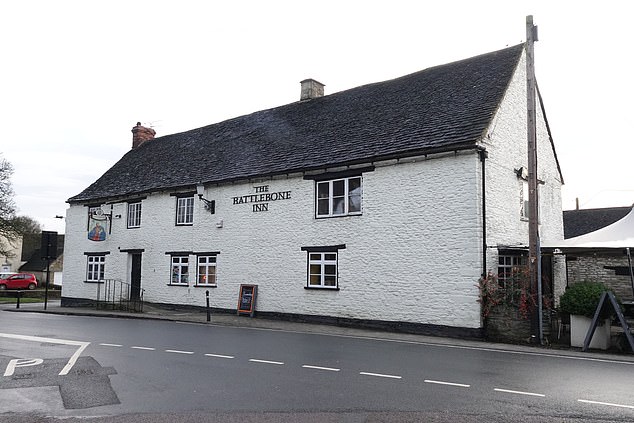 In 2004, he famously got into a ‘scuffle’ with paparazzi after leaving Pangaea nightclub near Piccadilly.

At the time, a spokesman for Prince Harry said: ‘Prince Harry was hit in the face by a camera as photographers crowded around him as he was getting into a car. In pushing the camera away, it’s understood that a photographer’s lip was cut.’

The following year, Harry found himself embroiled in further controversy when he attended a fancy dress party thrown by Olympic showjumper Richard Meade dressed as a Nazi.

The then 20-year-old made headlines around the world after the photos appeared on the front page of The Sun newspaper.

After the party, a source told the Daily Mail: ‘If this was his idea of a joke then it went down like a lead balloon.’

Harry issued a grovelling apology shortly after the image was published.

He said: ‘I am very sorry if I have caused any offence or embarrassment to anyone. It was a poor choice of costume and I apologise.’ 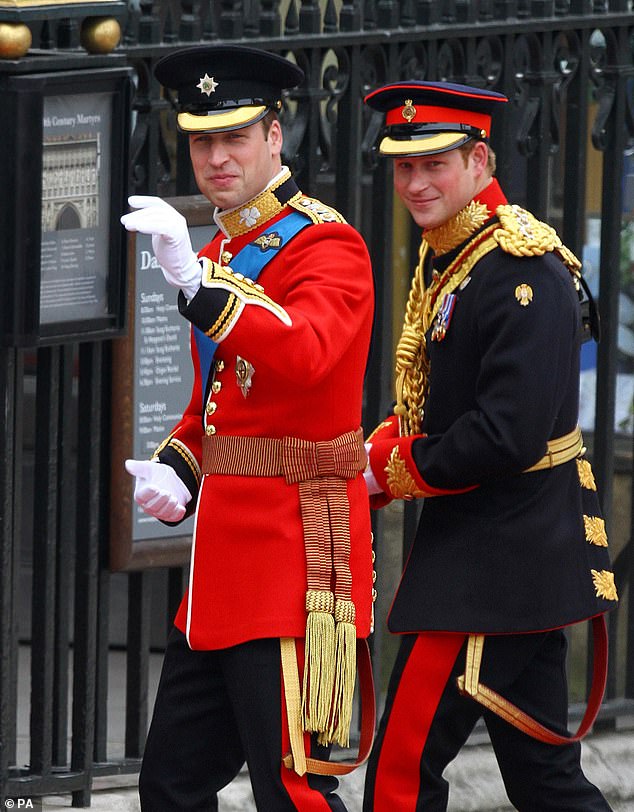 Harry reportedly stayed out partying at the Goring Hotel the night before he was best man at Prince William’s wedding in 2011, pictured

The Duke of Sussex has since gone on to address the incident, both in Spare and in the Sussexes’ Netflix documentary, Harry & Meghan.

In the documentary, he recalled his shame at the error of judgment and revealed how he had met with Holocaust survivors and London’s chief rabbi in the wake of the controversy.

However, in an extract from Spare, he appears to try to shift blame for the gaffe onto the Prince and Princess of Wales.

Harry claimed that Kate and William ‘howled’ at the idea of him dressing in the Nazi costume, Page Six reported

Calmer years followed as Harry founded his charity Sentebale and carried out projects in Botswana and Lesotho (with the co-founder of the charity being Prince Seeiso of Lesotho).

While he still enjoyed a good night out, the Duke of Sussex became savvier in going under the radar – and was even reported to have snuck in and out of Chelsea nightclub Embargo Republica through the fire escape in 2010.

And he continued to party incognito – reportedly enjoying a late-night drinking session the night before he was best man at Prince William’s wedding to Kate.

A source told the Daily Mail that Harry had been out until 3am the night before William’s nuptials and left the party venue (The Goring Hotel in Belgravia where the Middletons were staying) with a giant leap from above which injured his ankle.

The source said: ‘People were surprised to see him there so late before one of the biggest wedding days of the decade, and even more surprised when he jumped off the balcony – and landed with a thump.

‘He had struggled to climb up the railings to get into position, so when he jumped over the edge he did so rather unsteadily and landed awkwardly next to a flower bed.’

They added: ‘People were laughing and joking that his fall could have seen him walking through Westminster Abbey the following morning with a broken leg. At one point it was thought he’d twisted his ankle.’

The following year he was pictured at a nightclub in Hvar, Croatia, with two models during a night of ‘out of control’ partying.

Staff at the nightclub, called Veneranda, said the prince ‘could not be stopped’ from plunging into the out-of-bounds pool while dancing to house music and downing £5 shots of tequila.

Posing with models Ana Simovic, 23, Svetlana Gavrilovic, 28, and his friend Tom ‘Skippy’ Inskip, 25, he wore a T-shirt given to him by club bosses concerned that he needed dry clothes.

The Daily Mail reported that Miss Gavrilovic described the Prince as a ‘true gentleman’.

She said: ‘He noticed us and came over to say “Hi”. I was very surprised by how approachable he was.’

After several years of cleaning up his image during his service in Afghanistan and through his philanthropic work, Harry arrived at the club on the Adriatic island at 2am, after a night of drinking vodka, whisky and beer in a local bar.

It was reported that Harry continued to order drinks despite running out of money, before his protection officers settled the bar tab – with staff not initially realising they were serving a royal.

However despite being photographed enjoying himself on the dancefloor, Harry’s boozy Croatia holiday was relatively free of controversy.

But the following year, his lads trip to Las Vegas saw him once again making headlines, when leaked naked photo began to circulate online after a game of ‘strip billiards’.

The game took place during a party at the Encore hotel, where there were around 25 people including 15 ‘party girls’.

After he and several others stripped naked during the game, grainy photos of the prince emerged on TMZ – leading to Harry being quizzed on the incident by his father and personal protection officers.

A decade on from the controversy, Harry addressed it in a podcast with Hollywood actor Dax Shepherd.

Speaking on Armchair Expert, he joked: ‘At least I wasn’t running down the strip, stripping or naked.’

Addressing the incident once more in his memoir, Harry reveals his father was soft on him when he arrived at Clarence House to face the music, and had been much more understanding than he expected.