Prince Harry and Oprah Winfrey will reunite again this Friday to revisit their Apple TV+ documentary about mental health with a virtual follow-up discussion one week later.

The Duke of Sussex will speak to Oprah and other celebrities involved in the five-part programme including actress Glenn Close as they reveal more about their stories in ‘The Me You Can’t See: A Path Forward’.

It comes after Apple said the series, which began streaming last Friday, had brought a 25 per cent rise in new viewers to the platform and a more than 40 per cent increase in average weekend viewership in the UK last week.

This Friday’s follow-up, described as a ‘virtual town hall conversation’, will reunite health experts and celebrities, athletes and others who spoke about their struggles with depression, schizophrenia and anxiety in the series.

The initial documentary, called ‘The Me You Can’t See’, saw Harry speak at length about the trauma of his mother Princess Diana’s death, his concern for wife Meghan Markle and the reaction by other Royal Family members.

Prince Harry and Glenn Close speak to Oprah Winfrey in ‘The Me You Can’t See: A Path Forward’ on Apple TV+ this Friday

The show was also widely watched in Canada, Australia, Germany, Brazil and other countries, Apple said. It is not yet clear whether Harry will speak more about his own mental health struggles in this Friday’s programme.

‘The Me You Can’t See’ project marked Harry’s first foray into television production since he and Meghan, formally known as the Duke and Duchess of Sussex, quit their royal duties and moved to California last year.

Apple TV+ said the virtual episode this Friday would feature some of those who were interviewed offering further insight into their stories and guidance from experts.

News of this Friday’s programme was released by Reuters, Associated Press and the Deadline news website simultaneously at exactly 1.16pm today.

About half an hour later at 1.49pm, the Sussexes’s trusted media partner Omid Scobie, who is the royal editor at Harper’s Bazaar, tweeted: ‘Millions have already streamed #TheMeYouCantSee, and now @AppleTV confirm that @Oprah and Prince Harry are following up the series with a ‘town hall-style conversation’ special. 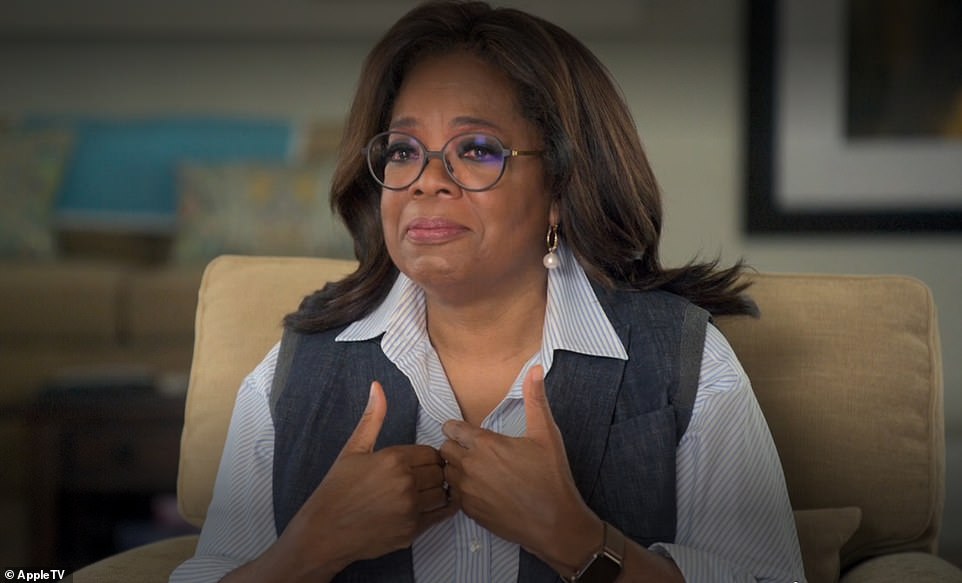 ‘A Path Forward will be available from May 28 and offers further insight from guests and their stories.’

An Apple spokesman said: ‘Apple TV+ announced today ‘The Me You Can’t See: A Path Forward,’ a town hall conversation hosted by co-creators and executive producers Oprah Winfrey and Prince Harry, with subjects and experts from the critically acclaimed, multi-part documentary series exploring mental health and emotional well-being, premiering Friday, May 28 for free on Apple TV+.

On the Sussexes’ cries for help to the Royal Family

‘I thought my family would help, but every single ask, request, warning, whatever it is, just got met with total silence, total neglect. We spent four years trying to make it work. We did everything that we possibly could to stay there and carry on doing the role and doing the job. But Meghan was struggling.’

On Harry’s family ‘stopping’ them from quitting

‘That feeling of being trapped within the family, there was no option to leave. Eventually when I made that decision for my family, I was still told, ‘You can’t do this’, And it’s like, ‘Well how bad does it have to get until I am allowed to do this?’. She [Meghan] was going to end her life. It shouldn’t have to get to that.’

On Meghan’s wish to ‘end her life’

‘Meghan decided to share with me the suicidal thoughts and the practicalities of how she was going to end her life.

‘The thing that stopped her from seeing it through was how unfair it would be on me after everything that had happened to my mum and to now to be put in a position of losing another woman in my life — with a baby inside of her, our baby.

‘The scariest thing for her was her clarity of thought. She hadn’t ‘lost it.’ She wasn’t crazy. She wasn’t self-medicating, be it through pills or through alcohol. She was absolutely sober. She was completely sane’.

‘That doesn’t make sense. Just because you suffered doesn’t mean that your kids have to suffer, in fact quite the opposite.’

On ‘smears’ from ‘The Firm’

‘Before the Oprah interview had aired, because of the combined efforts of The Firm and the media to smear her, I was woken up in the middle of the night to her crying into her pillow because she doesn’t want to wake me up because I’m already carrying too much. That’s heartbreaking.’

On Meghan helping Harry into therapy

‘I saw GPs. I saw doctors. I saw therapists. I saw alternative therapists. I saw all sorts of people, but it was meeting and being with Meghan I knew that if I didn’t do the therapy and fix myself that I was going to lose this woman who I could see spending the rest of my life with.

‘When she said, ‘I think you need to see someone,’ it was in reaction to an argument that we had. And in that argument not knowing about it, I reverted back to 12-year-old Harry.’

‘Following the global debut of the groundbreaking documentary series, ‘The Me You Can’t See: A Path Forward,’ Oprah Winfrey and Prince Harry reunite with advisors and participants for a thought-provoking, wide-ranging conversation about mental health and emotional well-being, and where we go from here.

‘As the subjects offer further insight into their stories, experts share their guidance for continuing the global conversation.’

During the documentary, Harry once again lambasted the parenting skills of the Prince of Wales, criticising his father for expecting his sons to endure the pressures of royal life, just as Charles has done, instead of protecting them.

Harry criticised his family, accusing them of ‘total neglect’ when his wife Meghan was feeling suicidal amid harassment on social media.

And he laid bare his battles with panic attacks and severe anxiety, saying ‘so 28 to probably 32 was a nightmare time in my life’.

Harry also claimed his late mother was hounded in part because she was dating half-Egyptian Dodi Fayed.

Asked by Oprah if he had any regrets, Harry also said he wished that he had taken a stronger stance on ‘the racism’ aimed at Meghan early in their relationship.

‘By this point, both of us were in shock,’ he said. ‘My mother was chased to her death while she was in a relationship with someone that wasn’t white.

‘And now look at what’s happened. And it all comes back to the same people, the same business model, the same industry.’

Asked whether he had regrets, he replied: ‘My biggest regret is not making more of a stance. Calling out racism when I did. History was repeating itself.’

Harry claimed that it was only him and their unborn child that kept Meghan going, after she told him about her suicidal thoughts and the practicalities of how she was going to end her life.

He said: ‘The thing that stopped her from seeing it through was how unfair it would be on me after everything that had happened to my mum and to now be put in a position of losing another woman in my life, with a baby inside of her, our baby.’

He said he was ‘somewhat ashamed’ of the way he dealt with it, suggesting that rather than prioritising their official duties they should have pulled out. But at the time, Harry said, that was not an option, because of ‘the system’.

Harry said that after marrying Meghan his attempts to get help from his family, following online trolling which was pushing her to the brink, were ignored.

He said: ‘Every single ask, request, warning, whatever it is, to stop just got met with total silence or total neglect.’

Harry added: ‘We spent four years trying to make it work. We did everything that we possibly could to stay there and carry on doing the role and doing the job.’

He said he did not go to his family when Meghan felt suicidal because he was ashamed the situation had got ‘that bad’ and also suspected the royals would not have been able to help.

The duke said: ‘That was one of the biggest reasons to leave, feeling trapped and feeling controlled through fear, both by the media and by the system itself which never encouraged the talking about this kind of trauma. Certainly now I will never be bullied into silence.’

Harry was also shown taking part in an eye movement desensitisation and reprocessing therapy session with a trained professional.

He said: ‘Therapy has equipped me to be able to take on anything – that’s why I’m here now, that’s why my wife is here now.’

His comments will no doubt have increased the much publicised tensions within the royal family following Harry and Meghan’s bombshell interview with Oprah in March.

In that programme the Sussexes first accused the royal family of not supporting them, claimed royal aides declined to help Meghan when she was troubled with suicidal thoughts and said a relative had made a racist comment about their son’s skin colour.

Royal biographer Angela Levin, the author of 2018 book ‘Harry: Conversations with the Prince’, tweeted on Monday: ‘How dreadful if Harry constantly thinks that he will lose Meghan like he did Diana and blames racism.

‘Plus can’t get rid of M’s threat to commit suicide. His life sounds too much for him and he should back away from being a woke lecturing celebrity.’

Hours before the new show aired, Harry joined his brother the Duke of Cambridge in criticising the BBC following an inquiry which found the broadcaster covered up ‘deceitful behaviour’ used by journalist Martin Bashir to secure his headline-making 1995 interview with their mother.

The series comes after Harry appeared to suggest his father and grandparents, the Queen and the Duke of Edinburgh, had all failed as parents during a podcast interview broadcast earlier in May.