EXPRESS INFORMER > News & Politics > Harry and Meghan will have an ally in Sophie Wessex, their first royal visitor after Archie was born

The Duke and Duchess of Sussex could have an ally in Sophie, the Countess of Wessex as the monarchy adjusts during a period of change following the Queen’s death last week.

Sophie, 57,  has been married to Her Majesty’s youngest son Prince Edward, 58, since 1999, with whom she shares two children: Lady Louise Windsor, 18, and James Viscount Severn, 14.

The Countess is reported to share close relationships within the royals family, and could offer a source of support to the Sussexes amid their alleged ongoing family tensions since stepping down as senior royals in 2020.

According to Valentine Low, writing in The Times, Sophie was the first member of the royal family to visit the Sussexes following the birth of Archie in 2019, going to the couple’s Frogmore Cottage in Windsor.

A source told the outlet that Sophie is ‘normal’ and has empathy that perhaps others in the Firm ‘don’t naturally have’. 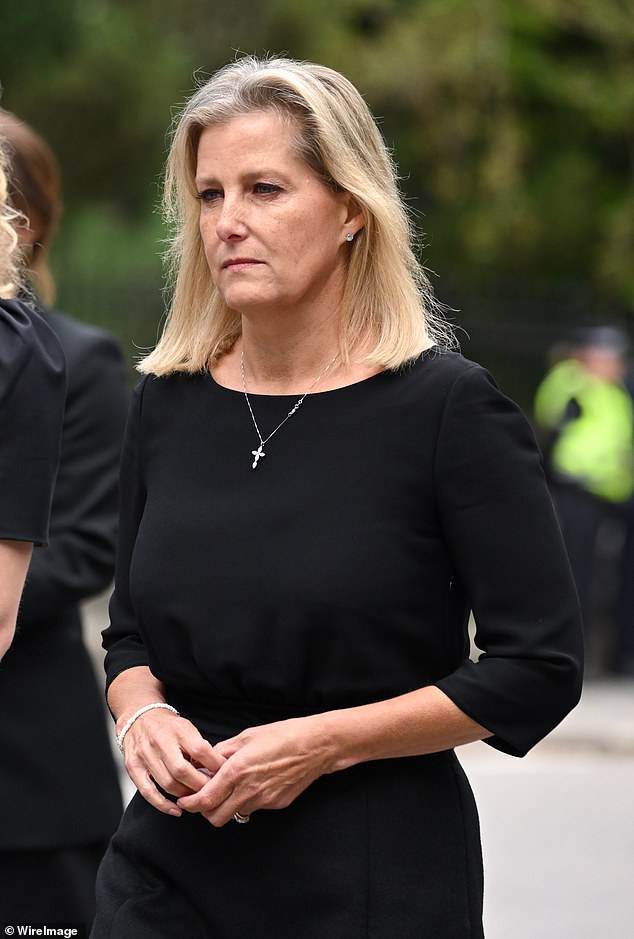 Sophie, pictured after a memorial service near Balmoral last week, has been seen looking emotional following the death of the Queen, who she was incredibly close to 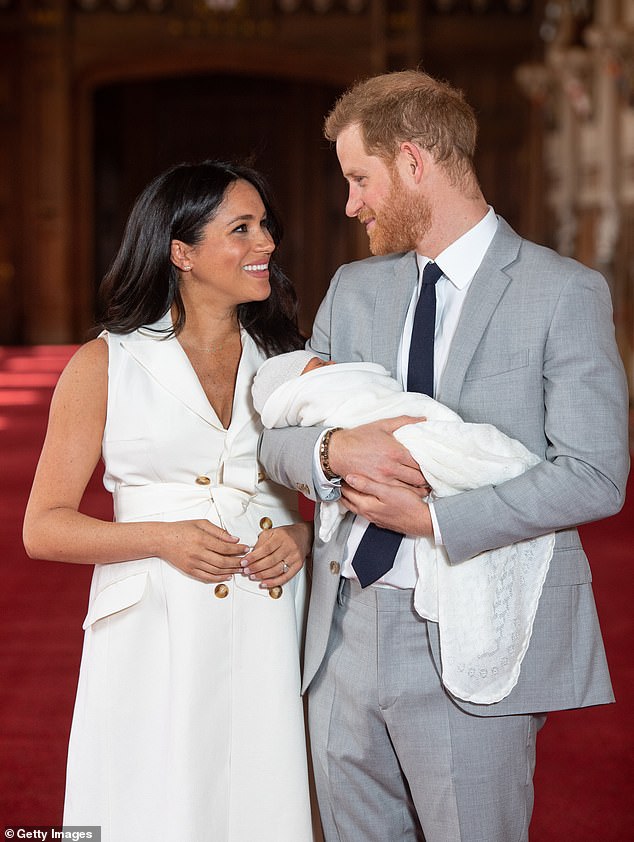 Prince Harry and his wife Meghan Markle (pictured in 2019 in Windsor with their son Archie), were reportedly visited by Sophie at their Frogmore Cottage after the birth

They said: ‘She did the right thing. She got in the car and went over. She has got the empathy and warmth that maybe people who grew up in that family don’t naturally have.

‘Normal people would think: this is what you do. You go; you make sure the new mum is OK and see the baby.’

Sophie has also been described as ‘incredibly empathetic’ by Mark Foster-Brown, who attended Cambridge university alongside Edward.

He told The Times that the Countess also shares a close bond with the Princess of Wales, describing the ‘line of communication’ between the two women as ‘incredibly important’.

Mark added: ‘Sophie is incredibly empathetic. If you are a supporter of the royal family, you would hope that that would be a key relationship.’

The teary-eyed Countess of Wessex, Sophie studies the floral tributes and loving messages left to her mother-in-law, the Queen, at Crathie Kirk church near Balmoral on Saturday

Sophie, Countess of Wessex attends a Service of Thanksgiving for the life of Queen Elizabeth II on Monday in Edinburgh

The closeness of the relationship Sophie shared with the Queen – who she called ‘mama’ – has been brought into sharp focus since the death of Her Majesty at Balmoral almost a week ago.

At a service for her mother-in-law, who was said to treat her as a ‘second daughter’, near Balmoral the Countess of Wessex was seen teary-eyed while kneeling to admire tributes.

The pair are thought to have developed their relationship when the Queen cared for Sophie in 2005 after her mother, Mary Rhys-Jones, 77, died from stomach cancer in 2005.

Additionally, as Prince Edward’s and Sophie’s house, Bagshot Park, is only a short trip from Windsor it meant the Queen’s youngest son and his family would regularly visit.

Walking their dogs together was a favourite past-time of the pair.

They also shared a love of military history, spending hours poring over ancient documents in the Royal Archives at Windsor, where Sophie and her mother-in-law indulged in their shared hobby, researching military history. 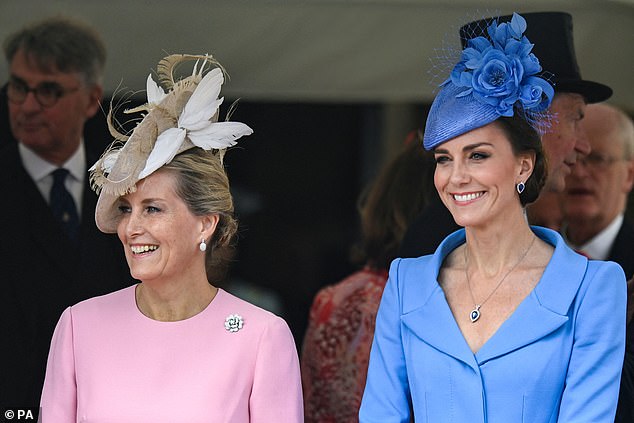 Sophie (left) is also a source of advice for the new Princess of Wales (right), with the ‘line of communication’ between the two women being described as ‘incredibly important’ 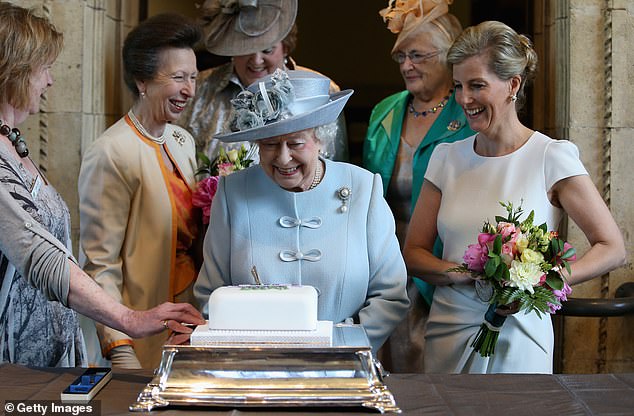 The close relationship between Sophie  (pictured, right) and her ‘mama’ the Queen (centre) has been well reported. Here they are seen together at the Centenary Annual Meeting of The National Federation Of Women’s Institute at the Royal Albert Hall in 2015

Now it has been speculated that the Countess may be elevated to a Duchess under King Charles, with The Telegraph reporting that her husband Prince Edward may become the Duke of Edinburgh – the title held by his father Prince Philip, who died in 2021.

The final say on rests with the King, the current Duke of Edinburgh after inheriting the role from Prince Philip, on whether he wishes to grant his youngest brother the title.

Prince Philip had said he wanted his youngest son to take on the title when it was the right time and his oldest son, then Prince Charles, was thought to have agreed.

However, some believed he had come round to changing his mind on the matter after the death of his father – but more recently experts believe Prince Edward will gain the Duke of Edinburgh title, the Telegraph reports.

For the title to change hands the king would need to write letters patent – an order from the monarch granting a title – to create a new dukedom of Edinburgh.

If gone ahead with, this move would be a touching and lasting connection between the late Queen and her much loved daughter-in-law, Sophie.