EXPRESS INFORMER > News & Politics > Harry and Meghan ‘ramp up the drama’ for Netflix: Body language expert reveals how they ‘perform’

Harry and Meghan ‘ramp up the drama’ for Netflix: Body language expert JUDI JAMES reveals how the Sussexes ‘perform’ for the cameras – but Harry ‘lurches between emotional highs and lows’

Harry and Meghan have ‘ramped up the drama’ for the Netflix camera crew filming their every move, a body language expert has claimed.

The Duke and Duchess of Sussex were all smiles as they met injured military veterans and hitched a rid on mini Land Rovers on the first day of the Invictus Games at The Hague in Holland today.

The royal couple’s visit marks their return to Europe after fleeing for California during ‘Megxit’ with the pair also reportedly visiting the Queen.

Speaking to MailOnline, body language expert Judi James explained: ‘As any reality star knows, it’s impossible to be followed closely by a camera crew without being aware of your body language responses and maybe ramping up the drama consciously or subconsciously as you internally analyse how each scene is going to look in the final production.

‘Emotions need to be visible and clearly translatable as you record your performance, which can often lead to over-played or over-kill rituals.

‘Meghan looks pitch-perfect for her body language messaging here though, showing congruent excitement, delight and enthusiasm as she responds to the sports she is watching.

‘She and Harry have one powerful moment of mirrored responses when they are watching the driving and both go open-mouthed with shock, with both mouths rounded into an identical ‘oh’ of surprise that captures one special experience.

Harry and Meghan are pictured reacting during a driving challenge at the Invictus Games, April 16, 2022

‘Even their mirrored shades define the shot to perfection as we can see what they are watching at the same time as we see their responses.’

James continued: ‘There is a confident clarity about Meghan’s body language as she uses several methods of upbeat emotional signalling, from the faded denim jeans that remind fans of their first public appearance as a couple before their marriage to the double hand clasp that we saw at their engagement interview, where she holds Harry’s hand in a clasp then places her free hand onto his arm to increase the message of affection and togetherness.’

‘Her ‘royal’ pose for the official US delegation photos shows echoes of the induction training she did with the Queen, with her straight back, elegant hand clasp and even the ‘Duchess slant’ positioning of her legs suggesting she still retains many of those traits from her time in the royal Firm, and her handshake with the Romanian team is so sweetly like the shake Diana used to do, with the shoulder of the hand doing the shaking hunched up to both control the strap of her handbag and to signal status and social modesty as she shakes.

‘Even Meghan’s head tilt was similar of the kind of slightly bashful, friendly tie-sign Diana would add to her greeting rituals. 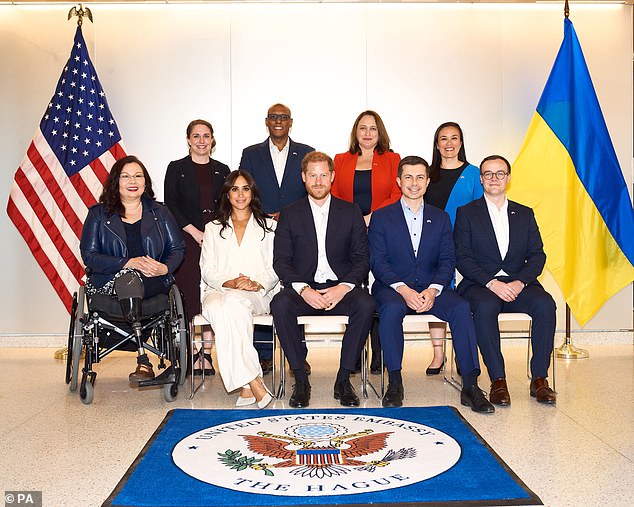 Harry and Meghan are pictured meeting Pete Buttigieg on Friday, along with the rest of the U.S. delegation 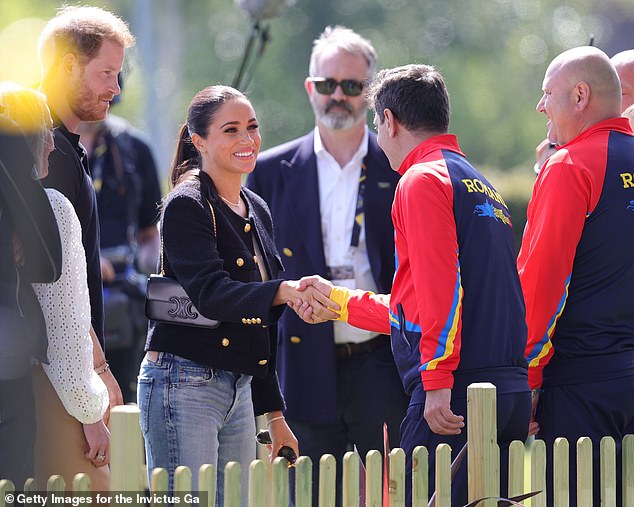 ‘While Meghan is seen using animated gesticulation throughout to show her pride and enthusiasm at the event, at one point even looking up at Harry while waving her hands as though trying to cue him to do the same, Harry’s responses seem rather more complex, suggesting he is suffering from mixed emotions at the event and possibly at the meeting in the UK that preceded it.’

She added: ‘Harry’s body language so far has been shown lurching between the emotional highs of being with the people he loves at the event he adores and something that has looked at times sadder and more reflective.

‘He arrived striding ahead with all the confidence of a leader but today the emotional side of the event seems to have affected him alongside the excitement of the sports themselves.

‘His emotional display at the arrival ceremony showed him looking more distressed or choked with tears than ever before. Watching arrivals we can see his brows puckering and his lips sucking inward in a signal of growing emotion before we see that iconic moment that his head drops as he looks overwhelmed, his right hand clenching and then fiddling in a diversion ritual. Meghan places a nurturing hand over his upturned palm and their hand clasp looks supportive. 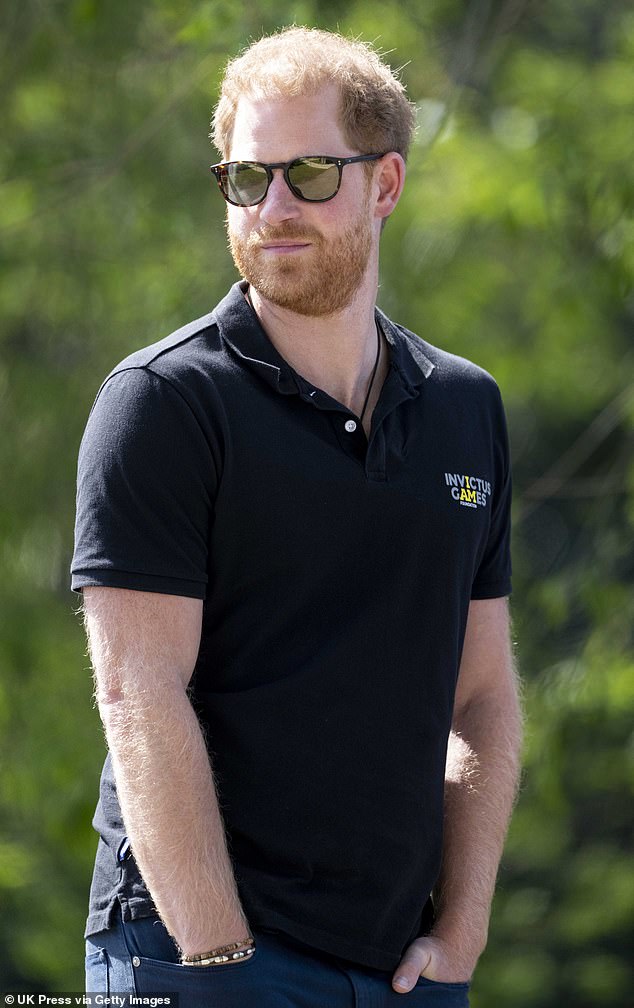 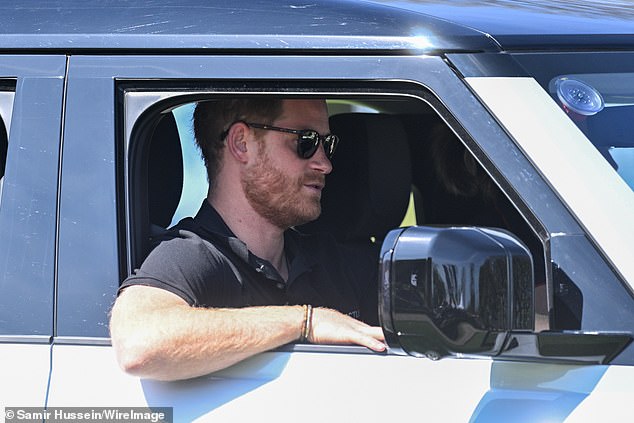 ‘Harry’s arrival wave in his car comes with a glum-looking facial expression and the wave is a part-performed ‘hail’ that looks reluctant thanks to the way his elbow is kept resting on the car door.

‘While Meghan is smiling and animated he can be seen with his hands stuffed into his jeans pockets and when she does provide the inclusive nudges he just bends his head to listen with no apparent eye contact.

‘Even speaking to organisers or hosts he has folded his arms and again is not using eye contact.

‘These moments suggest deeper emotions running under his obvious delight and love of the event and its participants, whereas Meghan’s displays look far more simple and clear.’