Meghan quotes her idol Martin Luther King as she tells the audience that: ‘Darkness cannot drive out darkness, only light can do that’. The couple end the podcast – the first of a series thought to be worth £30m ($40m) – by saying, ‘love always wins’.

Many Twitter users criticised the show, with one calling it ‘dull and preachy’ while another wrote ‘I’d rather watch concrete [set]’. However, some fans called it ‘heartwarming’ and praised Archie’s appearance as ‘adorable’.

Other social media users suggested it was ironic that the couple had decided to feature their one-year-old son in the multi-million dollar podcast shortly after having moved to the US to protect their family’s privacy.

Simon Oakden tweeted: ‘I hope others will join me in respecting the wishes of these people and decide not to invade their privacy by listening to it.’

Nigel Roberts agreed, adding: ‘Great to see you getting the privacy is so craved for before leaving the United Kingdom…’

But dozens were delighted by their couple’s latest offering, with Carolyn Durand calling it both ‘uplifting and heartbreaking’, while Luke Mason suggested Meghan had ‘a voice for podcasting’.

Archie, their one-year-old son, was singled out for praised as he delighted listeners with his giggle at the end of the podcast.

One person commented: ‘What a cute, pleasant surprise from little Archie. His laughter – so infectious.’

The podcast is a ‘holiday special’ that ends with their 19-month-old son Archie giggling at the end as he wishes people a ‘fun’ 2021.

His cameo is followed by the gospel song This Little Light of Mine, which was played at the end of their wedding in May 2018.

The Sussexes called on many of their most friends to appear on their first Archewell Audio podcast, which they promise will ‘uplift and entertain audiences around the world’.

Meghan said they asked people who ‘inspire us’ to appear on the podcast and give ‘their thoughts on what they learned from 2020’.

Sir Elton was a friend of Harry’s mother Diana, Princess of Wales and has regularly supported her son over the years, while James Corden was a guest at Harry and Meghan’s wedding and was asked by the duke to perform at the couple’s evening celebration.

Experts have called the couple’s Spotify tie-up as another big step towards building what experts believe could become a $1billion business empire in the US after a super-deal with Netflix to make documentaries about their pet projects. 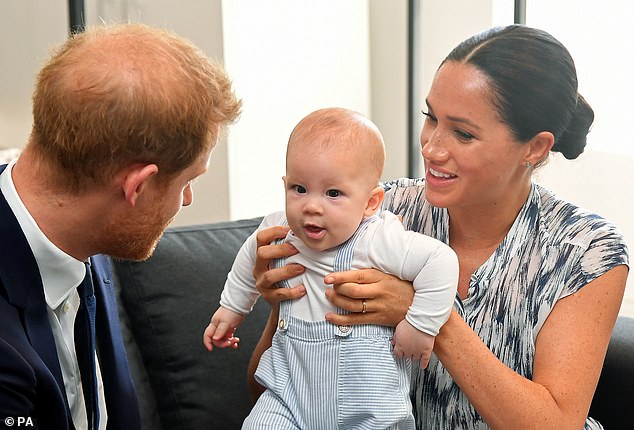 Harry and Meghan hold their son Archie while visiting Cape Town in September 2019, before they moved to North America

The podcast is a ‘holiday special’ that ends with their 19-month-old son Archie giggling at the end as he wishes people a ‘fun’ 2021. Pictured is some of the Twitter reaction it generated 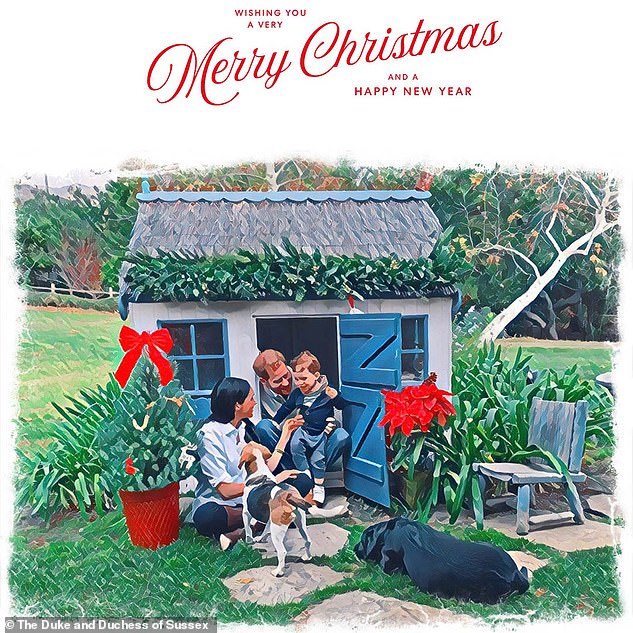 Last week, Meghan and Harry released their first Christmas card with Archie since relocating to Los Angeles earlier this year

Harry and Meghan began their show by paying tribute to healthcare and frontline workers for their ‘sacrifices’ and remembered those who have lived through ‘uncertainty and unthinkable loss’ during the coronavirus pandemic.

The couple have signed a lucrative deal with Spotify to host and produce podcasts, estimated to be worth up to £30million.

The stars joining Meghan and Harry on their new podcast

The working partnership comes a few months after the couple signed a Netflix deal, to produce a range of programmes and series, rumoured to be worth more than £100 million.

Harry  told listeners: ‘We’re glad you’re here. As we all know, it’s been a year. And we really want to honour the compassion and kindness that has helped so many people get through it’.

While Meghan added: ‘And at the same time, to honour those who have experienced uncertainty and unthinkable loss. Our thoughts have been with you, especially during this holiday season.’

The duke continued: ‘And in too many instances people weren’t able to be at a loved one’s side or say goodbye as they would have wished’, and his wife said: ‘We also want to thank healthcare workers, frontline service workers, and so many others for their sacrifices.’

Harry said in the podcast: ‘As we come to the end of this year and look to the future… let’s hold onto the lessons we’ve learned about how important it is to take care of one another, and how meaningful our connections are… even when they’re physically impossible.’

The podcast ends with the couple broadcasting the gospel song This Little Light of Mine which was played at the end of their wedding.

Meghan said: ‘From us I’ll say no matter what life throws at you guys, trust us when we say, love wins.’

She added: ‘This Little Light of Mine played at the very end of our wedding… while we were walking down the steps of the church.’

Quoting Martin Luther King she went on to say: ‘It was the music that we wanted playing when we started our lives together. Because as we all know, ‘darkness cannot drive out darkness, only light can do that…’

Harry added: ‘The message of this song is one we hold so dearly. It’s about using the power we each have within us to make this world a better place.’