By Oliver Price For Mailonline

Harrowing footage showing a dog being dragged along a road by a woman driving a mobility scooter has caused outrage online.

The distressing video clip shows the poor dog apparently unable to stand as it is pulled along a street by its lead around its neck in the Erdington area of Birmingham.

A person filming the footage from a nearby car shouts at the woman: ‘You are hurting your dog.’

‘You’re hurting the dog. The dog’s dead. You are hitting the kerb,’ the filmer said as the dragged dog was hit against the side of the kerb. 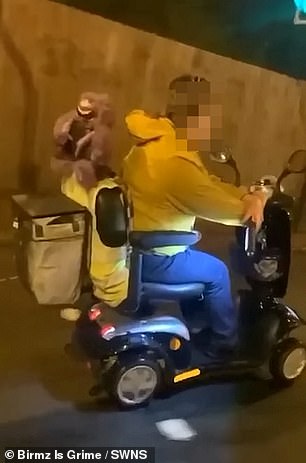 Do you know the woman riding the scooter?

The elderly woman can be seen looking at the camera before seemingly turning away muttering something inaudible and carrying along up the road.

The clip has caused widespread anger after being shared by the Birmz Is Grime blog on Twitter with the caption: ‘Who is this person? This dog needs to be found and rescued’.

One person commented: ‘Why has no one stopped her?’

Another put: ‘Has this been reported. It’s horrific.’

A third wrote: ‘Poor dog. I hope they find the lady driving and take the dog off her.’

One said ‘absolutely disgusting. I really hope the Dog is ok’ and another simply added: ‘That’s sickening.’

The RSPCA has confirmed they are looking into the incident and are asking the public to help provide information.

An RSPCA spokesperson said: ‘This video is very shocking to see. It has been brought to our attention and is now being looked into by our experienced officers. 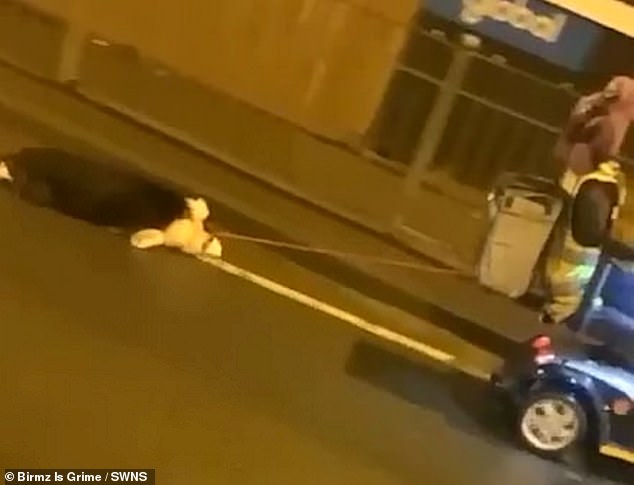 ‘Anyone with any first-hand information about the incident should call our emergency line on 0300 1234 999.’

‘We’re told it happened somewhere in Erdington, Birmingham within the last few days.

‘We’re currently looking into this to see if we’ve received any reports and will also liaise with the RSPCA.’

Anyone with information is asked to contact the force via Live Chat on their website or by calling 101.

**Do you know the woman riding the scooter? Email tips@dailymail.com and oliver.price@mailonline.co.uk**