Elusive: Neil Woodford leaves his office in July 2019, evading Jeff Prestridge’s efforts to speak to him

Hargreaves Lansdown, one of the 100 largest firms listed on the UK stock market, faces a potentially costly High Court battle over its controversial involvement in the Woodford investment debacle, The Mail on Sunday can today exclusively reveal.

The dramatic development in the Woodford saga unfolded late on Friday. This is when a claim was issued in the court on behalf of thousands of investors who lost money as a result of the closing and subsequent dismemberment of multi-billion pound investment fund Woodford Equity Income, run by high profile manager Neil Woodford.

Dealings in the £3.8billion fund were suspended in June 2019 as a result of it being unable to meet a £238million redemption request from Kent County Council.

Woodford, for many years considered one of the country’s top stock pickers, was subsequently removed as the fund’s manager (three years ago yesterday), the fund closed and most of the assets were sold off in a fire sale, crystallising losses for 300,000 investors. Since the fund’s closure, some £2.5billion has been returned to investors.

The claim on Friday was issued by litigation specialist RGL Management on behalf of 3,200 investors caught up in the scandal. It represents the ‘first stage’ of a group action which could result in financial redress for Woodford fund victims.

What makes RGL’s claim so sensational is its targeting of wealth platform Hargreaves Lansdown. Other Woodford related claims already lodged in the High Court by rival firms Harcus Parker and Leigh Day have been against Link Fund Solutions, a subsidiary of Australian based Link Group.

Link Fund Solutions is the company that as ‘authorised corporate director’ oversaw the Woodford fund on behalf of investors and was meant to ensure Neil Woodford stuck to the fund’s investment mandate of investing primarily in a portfolio of income-producing UK equities.

It failed to do so, resulting in Woodford being allowed to assemble a portfolio skewed towards illiquid – and hard to sell – investments, culminating in its suspension three and a half years ago. Many of these illiquid investments assets proved to be disastrous investments.

RGL’s decision to target Hargreaves Lansdown as well as Link represents a significant development in the quest to get financial justice for many of the 300,000 investors who had their investments frozen in June 2019.

This is because there are concerns over Link Group’s ability to meet any successful claim in the court – or pay redress demanded by City regulator, the Financial Conduct Authority.

Last month, the FCA issued a ‘warning notice’ to Link Fund Solutions after it concluded (but did not publish) its long drawn out investigation into the circumstances surrounding the closure of Woodford Equity Income.

The regulator said it was minded to impose a £50million fine on Link, plus require it to pay redress to Woodford investors of up to £306million (around £1,000 per investor).

The warning prompted Canadian company Dye and Durham to pull out of a takeover of seven firms belonging to Link Group – Link Fund Solutions among them – because it had been told it potentially would have to bankroll any redress if it went ahead with the takeover.

In contrast, Hargreaves Lansdown is very much in rude financial health. Although its profits tumbled in the first half of this year by 26 per cent, they were still a healthy £269.2million. Unlike Link, it has the financial wherewithal to pay any compensation if RGL’s claim goes to trial and is successful. RGL expects its claim against both Link and Hargreaves Lansdown to be in ‘excess of £100million’.

Of the 3,200 investors included in the first stage of RGL’s claim, 2,800 were Hargreaves Lansdown customers at the time the Woodford fund was suspended. On Friday, James Hayward, chief executive of RGL, told the MoS: ‘We are pleased to be filing this first tranche of claims, providing a route for those affected to secure redress from both Link Fund Solutions and Hargreaves Lansdown, whose respective unlawful conduct resulted in significant losses for Woodford Equity Income investors.’ Alexander Weinberg of Wallace LLP, RGL’s law firm, said: ‘This group action has a critical role in providing a route for Woodford Equity Income investors to secure redress. 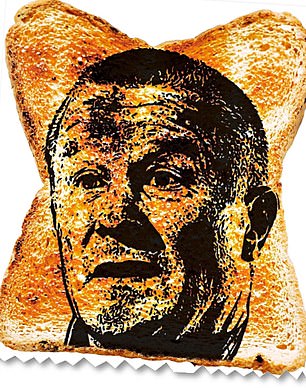 Toast: Neil Woodford’s empire teetered on the brink in 2019

‘Both institutions, Link Fund Solutions and Hargreaves Lansdown, failed investors – and each has a compelling case to answer.

‘RGL is resolute that both should be held accountable for their respective failings. The claim against both defendants will be pursued vigorously to that end.’

Hargreaves Lansdown aggressively promoted the Woodford fund as a ‘best buy’ on its website – from the day it was launched in June 2014 through to the day that dealings in the fund were suspended.

In the early days, justification for the fund’s best buy label was based on Neil Woodford previous’s stellar investment record at asset manager Invesco.

His early track record on the Woodford Equity Income fund was also impressive, resulting in the fund ballooning in size to £10billion – in no small way down to the investment platform’s hyping of the fund.

Yet when concerns were expressed by its own analysts in late November 2017 that the fund was increasing its exposure to ‘small and unquoted assets’, Hargreaves Lansdown kept on promoting the fund.

In March last year, RGL’s law firm Wallace issued a ‘letter before action’ to both Hargreaves Lansdown and Link spelling out why it was intending to take them to court. This development was also exclusively revealed in the MoS.

The letter sent to Hargreaves Lansdown claimed that the wealth manager had failed to ‘provide accurate, adequate and up-to-date information’ to customers about the risky nature of the fund’s portfolio in the run-up to its suspension.

This, Wallace claimed, was despite the wealth manager’s ‘persistent and increasing concerns’ about the fund’s mounting exposure to illiquid investments in smaller and unquoted companies.

When the Woodford fund was suspended, 134,000 clients of Hargreaves Lansdown had direct holdings in the fund worth just over £1billion. A further 160,000 had indirect exposure through funds with holdings in Equity Income, many run by the wealth manager as part of its multimanager fund offerings.

Wallace believes Hargreaves Lansdown failed clients in three ‘key legal areas’ – its duty of care towards them (required under tort law) as well as statutory and contractual obligations.

Louisa Spice, from Kent, invested £20,000 in the fund between 2014 and 2018 on the back of Hargreaves Lansdown’s glowing recommendation. Louisa, who runs a hot air balloon business with her husband, says she would have transferred her holding to another fund if she had been told by the wealth manager that it had concerns over the riskiness of the holdings lurking under the bonnet of Equity Income.

‘I feel strongly that justice should be done,’ she added. ‘Investors like me who have lost out through no fault of their own should be properly compensated.’

On Friday, another Woodford Equity Income investor – a pharmaceutical consultant from Glasgow – said Hargreaves Lansdown was the ‘biggest culprit in this whole fiasco as they recommended the fund right up until the day of its suspension’. He added: ‘Judgment day is in sight.’

Yet, like all investors caught up in this scandal, he may have to wait a while longer. Link has yet to confirm whether it will appeal against the FCA’s fine and demand for redress.

RGL’s claim could also drag on if Link and Hargreaves Lansdown refuse to settle out of court – and opt instead to go to trial. That would mean a court ruling not happening until 2025 at the earliest.

The next key date is in December when a judge will decide how the claim will proceed. The three claims issued by Harcus Parker, Leigh Day and RGL are likely to be combined into a ‘group litigation order’ and heard as one (Harcus Parker and Leigh Day have already joined forces).

On Friday, the MoS invited both Hargreaves Lansdown and Link to comment on RGL’s lodging of a claim against them in the High Court. They chose not to comment.

Woodford Equity Income Investors can register to join the RGL claim via website woodfordlitigation.com. Investors will only pay a fee if the claim is successful.

RGL will take 25 per cent of any compensation in fees. This compares with 30 per cent (Leigh Day) and around 42 per cent (Harcus Parker). Meanwhile, it is still not yet known whether the FCA will punish Woodford for his role in the debacle.