By Sarah Hartley For The Mail On Sunday

When you learn the last guest to check into your room was enjoying his 22nd stay – and that he hailed from Tennessee – you realise The Lygon Arms is hallowed ground for old-school Americans on a grand tour of the British Isles looking for a pit stop in the Cotswolds.

The attraction is obvious, as the walls of this 14th Century coaching inn reverberate with easy to devour history.

Charles I met Royalist supporters here and Oliver Cromwell spent the night on the premises before the Battle of Worcester in 1651. And after visits by King Edward VII and VIII, it trickles down to Hollywood elite: Cary Grant, Vivien Leigh, Elizabeth Taylor and Richard Burton. Throw in a lavish multi-million-pound refurb from the owners of grand country hotels Cliveden and Chewton Glen, then watch overseas bookings flood in.

Slice of history: Sarah Hartley checks into The Lygon Arms, above, a 14th Century coaching inn set in the Cotswold village of Broadway

‘Robust twills, tweeds and tartans in soft heathery palettes run from upholstered headboards to curtains and cushions,’ Sarah says of the hotel’s decor. Above is one of the 86 guest rooms

Dogs and children are made an equal fuss of (take advantage of the groomer or kids’ club) and there’s a buzz that makes for a sociable, unstuffy vibe. The knowledgeable staff keep the 86-room hotel running slickety-slick. For charm in every flagstone and mullion window, ask for a room in the main inn.

There are also mews cottages and, beloved of Americans, seven courtyard suites. Big and with air-conditioning, step-free access and vast wet rooms, the accommodation ticks every box for multi-gen stays.

Robust twills, tweeds and tartans in soft heathery palettes run from upholstered headboards to curtains and cushions, while cool black-and-white photographs hang on slate-hued walls. Sip coffee in your monogrammed robe on your mini terrace or stroll in the three-acre gardens where not a petal is out of place. An air-punching bonus is the spa swimming pool – Romanesque, bright and, praise be, long enough to swim decent lengths. 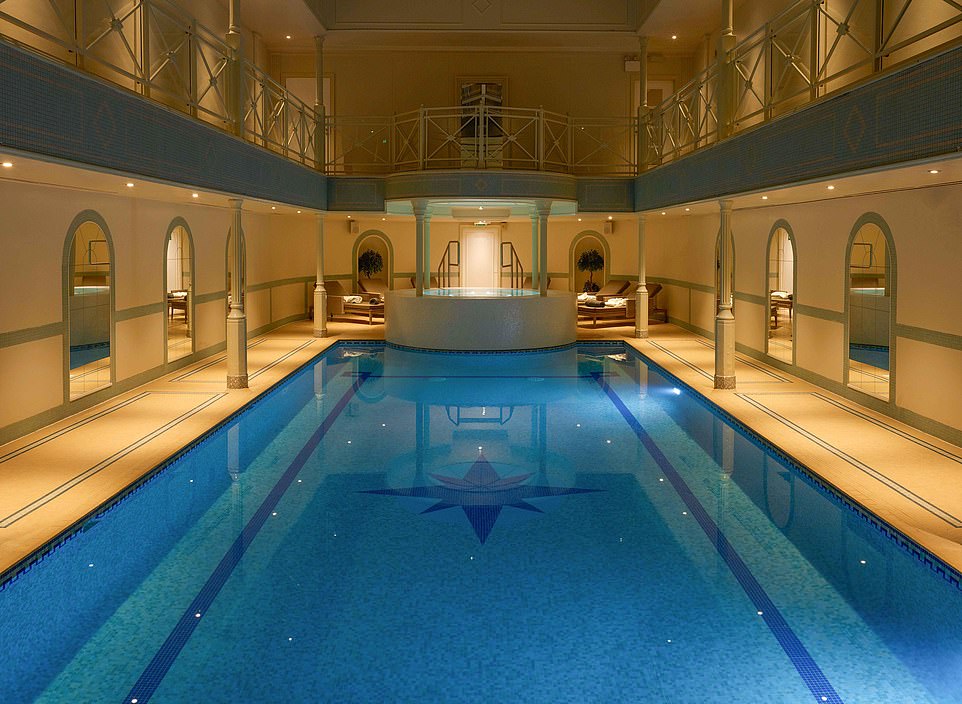 Pictured is the Romanesque spa swimming pool, which is ‘long enough to swim decent lengths’ 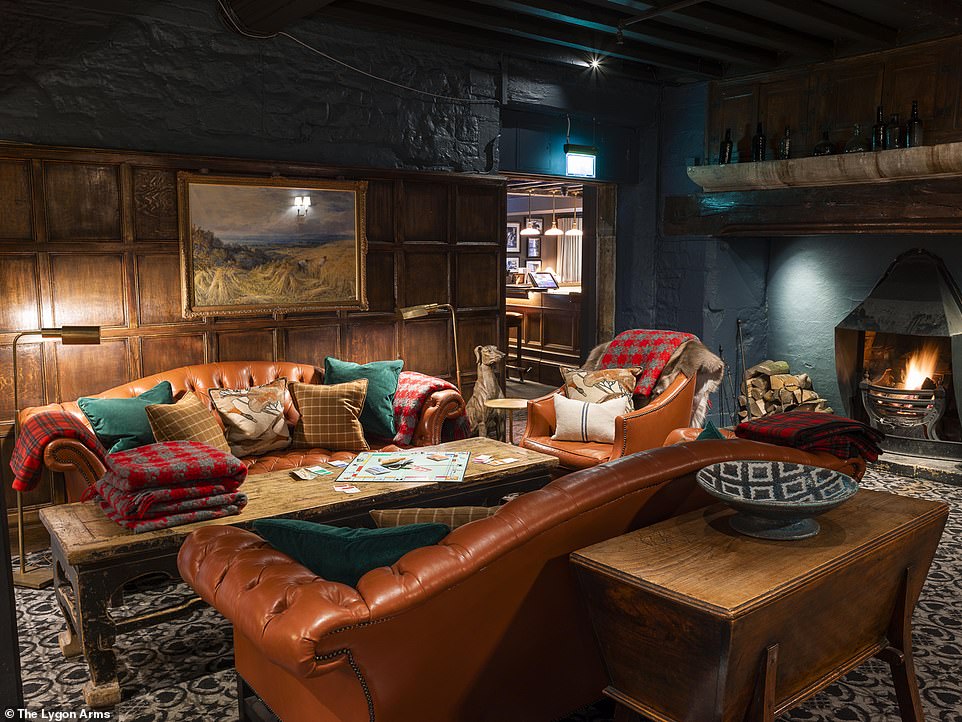 Former guests of the hotel include Charles I, Oliver Cromwell and King Edward VII and VIII

From the wine bar, guests spill out into the courtyard to sit beneath garland-lit trees. Inside, beyond the lounges, The Lygon Bar & Grill is relaxed despite the grand space. Diners sit at marble-topped tables with a backdrop of wood-panelled walls adorned with paintings beneath a 16th Century barrel ceiling hung with antler chandeliers.

The menu is easy-going brasserie fare. Torched mackerel with beetroot, watercress and Lygon horseradish to start, steak and chunky chips with steamed greens followed by Evesham strawberries and sorbet hit the spot.

Refreshingly, the inn doors are flung open first thing and breakfast is a military-neat buffet with muffins, granolas, fresh fruit and bread, plus good sausages, black pudding, bacon and scrambled eggs on parade. 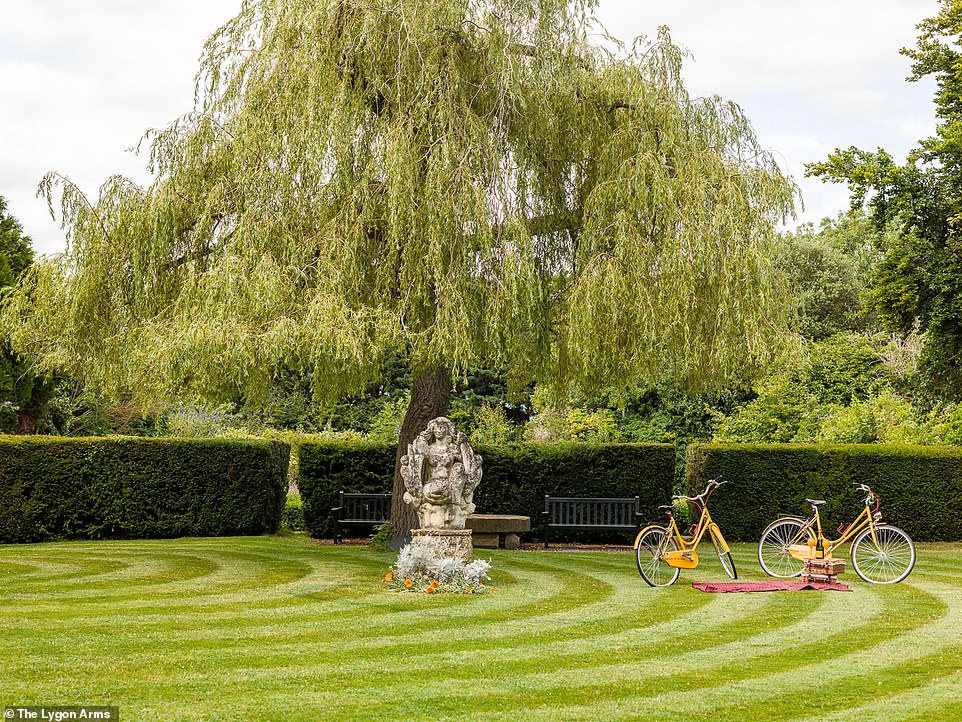 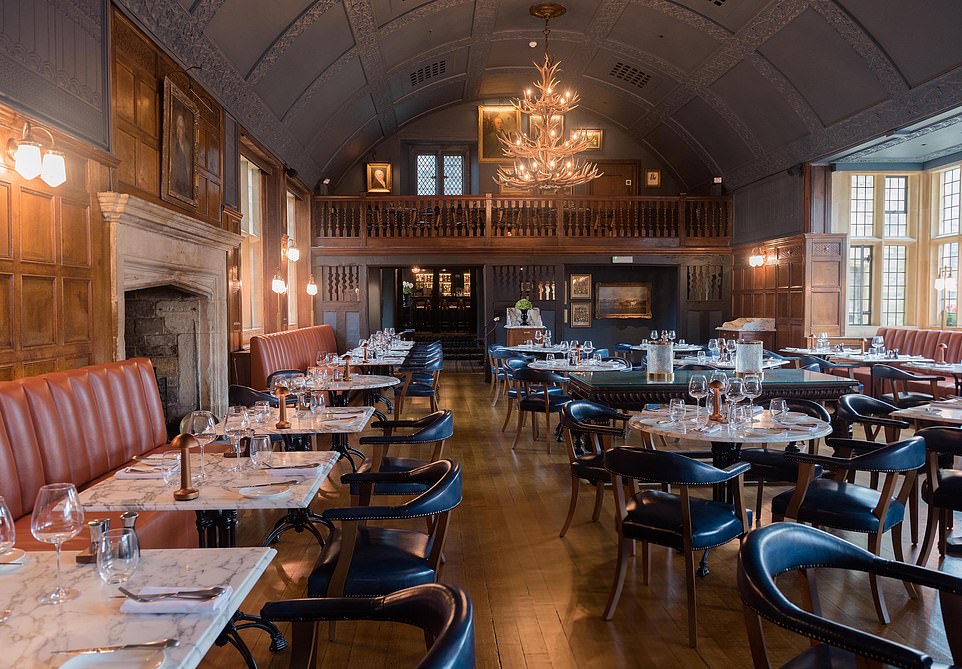 The Lygon Bar & Grill (pictured) is relaxed despite the grand space, according to Sarah 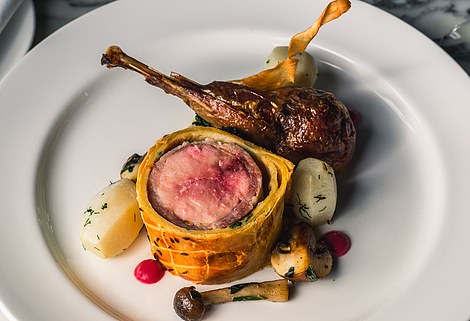 Broadway is a village so sweet, so quintessentially English – all bunting, brisk bustle and trade – that you half expect a film director to pop out from behind a box hedge and shout ‘Cut!’

The boutiques on the wide High Street will tempt even hardened savers into purchases of wood baskets, woollen throws and linen napkins.

Do make a date for the Moreton-in-Marsh agricultural show, the largest in the UK, held on the first Saturday in September.

On my visit, who should be found swaggering among the pens of prize bulls but the poster boy of the Cotswolds – Jeremy Clarkson.