Authorities searched the trash in Swampscott, close to the home of Brian Walshe’s mother, and at a Peabody garbage facility as they continue the hunt for Ana – who vanished nine days ago.

Her mother-in-laws apartment is  14 miles north of Boston, with Walshe claiming to law enforcement that he got lost on his way there on January 1.

Norfolk District Attorney’s office says that they discovered ‘several items’ which will now undergo forensic testing to see if they have any significance.

It comes after it was revealed Walshe had searched the internet for ‘how to dispose of a 115-pound woman’s body’.

Cops also found a knife in the basement of the family home with blood on it as well as on the floor – and said he had spent $450 in Home Depot on cleaning products.

Walshe appeared in court yesterday where he pleaded not guilty to misleading cops during the search for Ana. 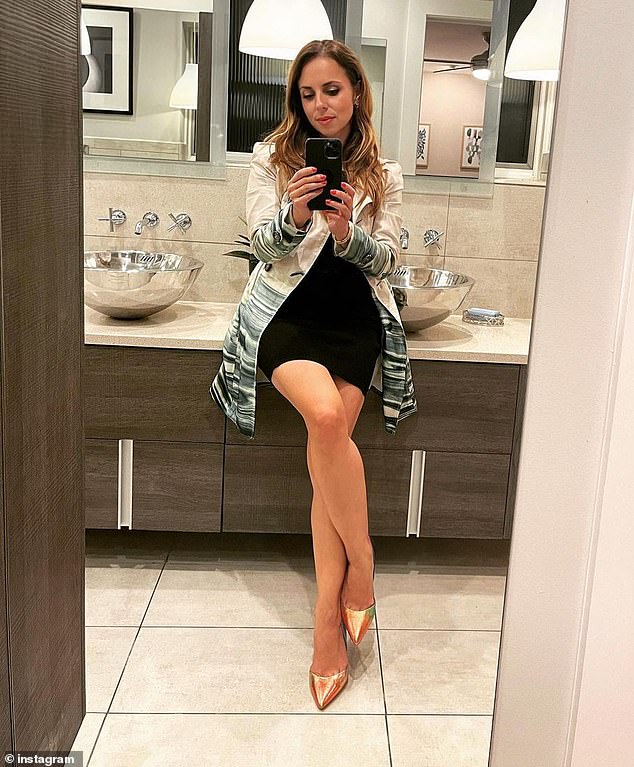 Cops have found blood, a hatchet, a hack saw, a rug and used cleaning supplies in the search for missing Massachusetts mother-of-three Ana Walshe 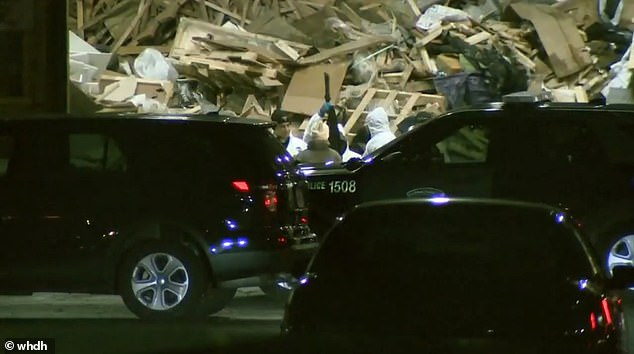 Police have been searching for the missing mother, and were last night seen digging through the trash searching for evidence days after raiding the family home in Cohasset 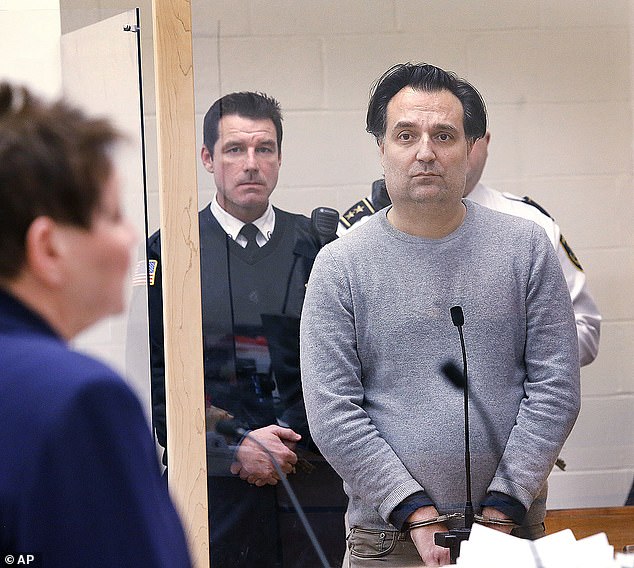 Brian Walshe, of Cohasset, faces a Quincy Court judge charged with impeding the investigation into his wife Ana’ disappearance from their home 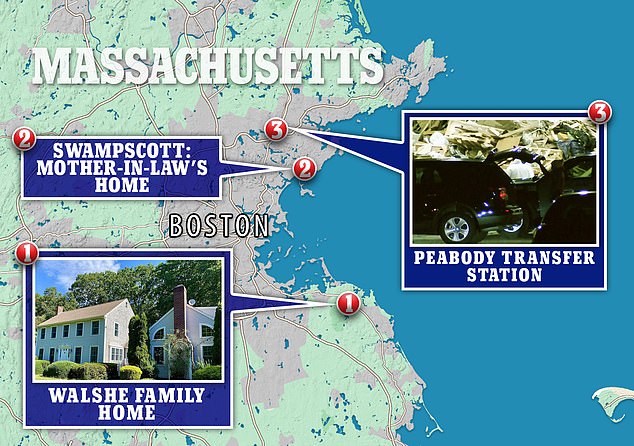 Norfolk District Attorney’s office confirmed that a ‘number of items’ were recovered from the Peabody transfer station after they sifted through the trash for hours.

In a statement they said: ‘Search activity conducted north of Boston yesterday resulted in a number of items being collected which will now be subject to processing and testing to determine if they are of evidentiary value to this investigation.’

Police were also seen in the parking lot of an apartment complex where Walshe’s mother lives, with dumpsters being hauled away with a police escort to the transfer station in Peabody to be searched.

It comes after Ana’s Serbian mother revealed her daughter begged her to fly to the US just a week before she vanished on New Year’s Day.

The real estate executive, 39, asked her Serbian mother, Milanka Lujubicic on Christmas Day to catch a flight to Washington DC on December 26.

Ljubicic, 69, said the sudden plea to get together over the holidays made her think there were ‘some problems’ in her daughter’s life. 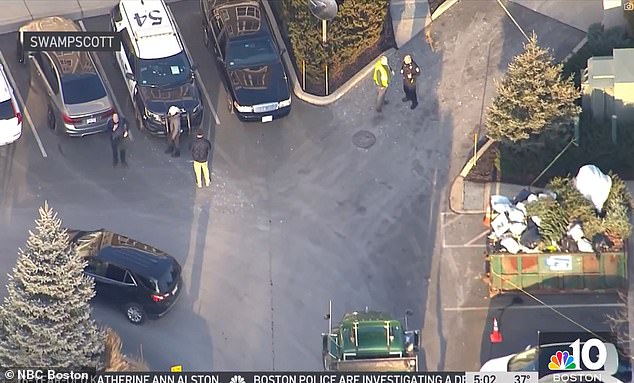 Police were also seen in the parking lot of an apartment complex where Walshe’s mother lives, with dumpsters being hauled away with a police escort to the transfer station in Peabody to be searched 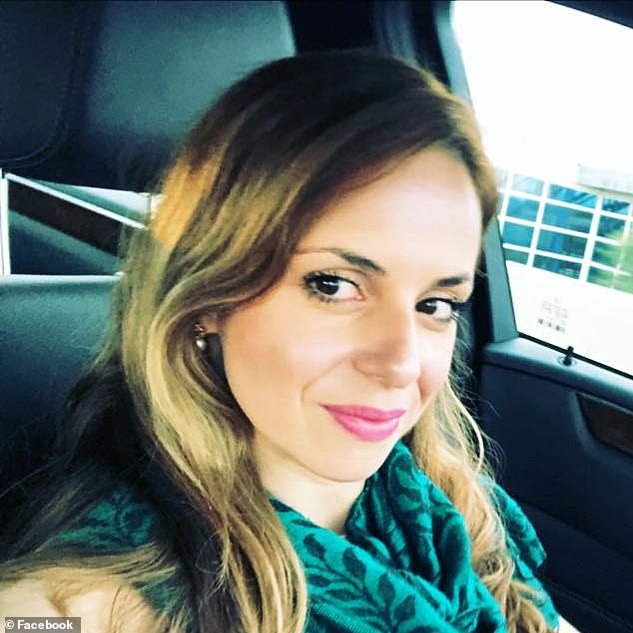 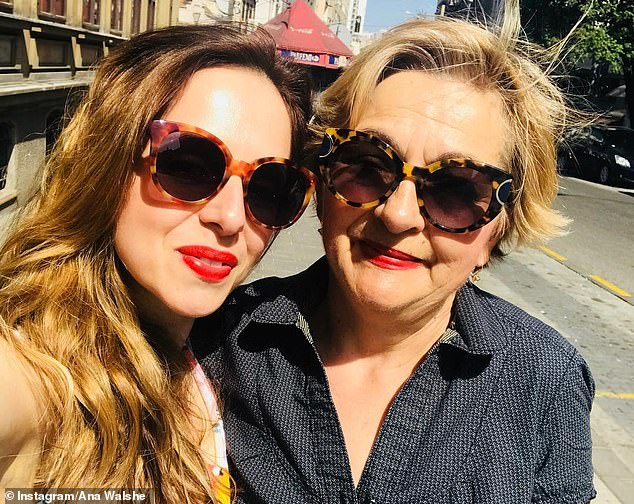 Mother-of-three Ana Walshe, 39 (left), texted her mother Milanka Ljubicic (right) on Christmas Day, pleading with her to go to Belgrade airport and catch a flight to Washington DC the next day 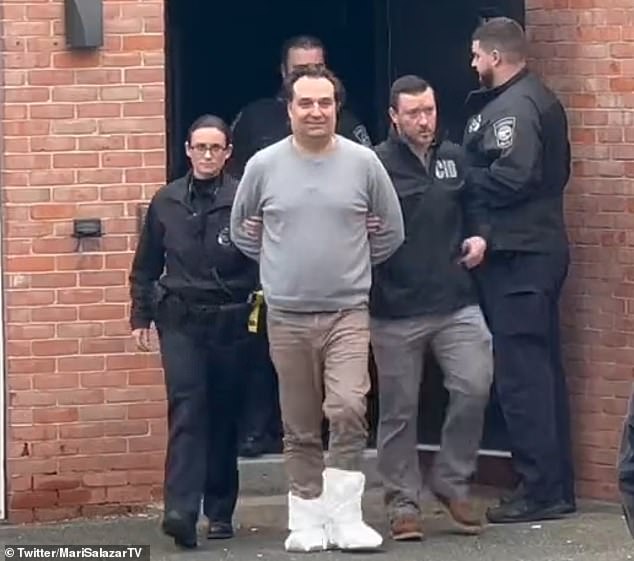 Walshe was seen cracking a smile as he was handcuffed and led out of the station by officers this morning while they continue to search for Ana Walshe, 39

November 2016: Brian Walshe was arrested in connection with an $80,000 art fraud of Andy Warhol paintings. He is ordered by a court to remain under house arrest until sentencing. Walshe has yet to be sentenced for the fraud.

January 1. 2023  Ana reportedly booked a rideshare car to take her to Logan International Airport at 4am, but it is unclear if she ever got into the vehicle.

Her husband claims he went to Whole Foods and CVS, but there is no surveillance or receipts to prove he went.

January 2: Walshe tells authorities that he only left the family home in Cohasset to take his son for ice cream.

He is caught on surveillance footage buying $450 worth of cleaning supplies in Home Depot. Ana’s phone pinged in the area of the house on Jan 1 and 2.

January 5: Police say Walshe is cooperating with the investigation into his missing wife.

January 8: Walshe is seen leaving the property on Sunday in a red Volkswagen. His three children were taken away in a separate vehicle.

Officers executed a search warrant at their home and found blood in the basement, along with a broken knife. The officers loaded a Volvo SUV onto the back of a truck while others searched the grounds of their home.

Police arrested Walshe on suspicion of ‘misleading’ authorities but have not charged him with anything else.

January 9: Walshe grins at reporters as he is transported to his arraignment at Quincy District Court. He was held on $500,000 cash bail.

Police search a garbage facility in Peabody and find used cleaning products, a hacksaw, hatched and a rug

Ana vanished on January 1 when she failed to catch a flight to Washington DC for work – with her husband Brian Walshe, 46, being charged with ‘misleading’ police in regards to the investigation.

Police have been searching for the missing mother, and were last night seen digging through the trash searching for evidence days after raiding the family home in Cohasset.

‘And now I can’t forgive myself for not just letting things fall where they may, and just go, and whatever happens to me, happens.’

Officers in protective suits and police dogs were at the facility in Newbury Street in Peabody, though it is unclear exactly what was found.

Norfolk DA’s office added: ‘The processing of the home may be completed as soon as today or tomorrow.

‘There is no anticipated change or adjustment of the charges in place in this matter at this time.’

It comes after Walshe told investigators that he visited his mother’s house in nearby Swampscott on New Year’s Day but got lost.

The art swindler made several Google searches for  ‘how to dispose of a 115-pound woman’s body.’

Authorities initially treated the case as a missing person, but sources say they now believe Ana could have been murdered – describing her as 5’2 and 115 pounds in an appeal for her whereabouts.

Walshe was earlier seen on surveillance video buying heavy-duty cleaning supplies despite telling cops he had been home around the time Ana was last seen alive.

He told police that his wife vanished after she took a car to Boston Logan Airport on January 1 at around 6am.

However, ride-share services show no pickups at the family home and Ana’s cell phone continued pinging at the property for two days.

Ana was not reported missing until January 4, when her office called the police when she failed to show up for work.

Since then, cops have been combing the seaside town of Cohasset for any sign of her.

Authorities say Walshe gave cops misleading statements about his and his wife’s actions around the time of her disappearance, buying himself ample time to clean up a possible crime scene.

Prosecutor Lynn Beland told the court on Monday: ‘These various statements caused a delay in the investigation to the point that during the time frame when he didn’t report his wife and gave various statements, that allowed him time to either clean up evidence, dispose of evidence, and causing a delay.’

Investigators impounded two trash trailers in the search, with a business owner saying police contacted him on Saturday night, adding that they were last emptied just before New Year.

Art-swindler Walshe was recorded leaving a Cohasset police station on Monday morning, where he smirked and smiled at reporters. 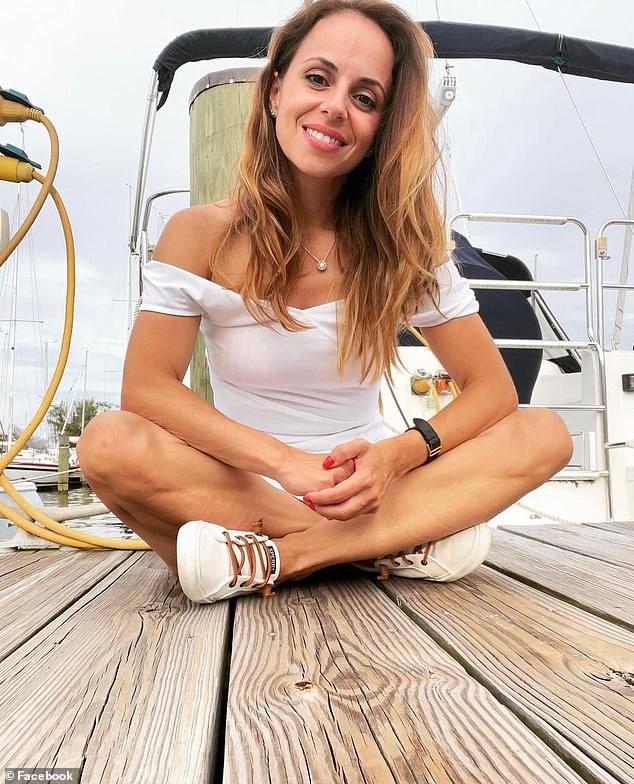 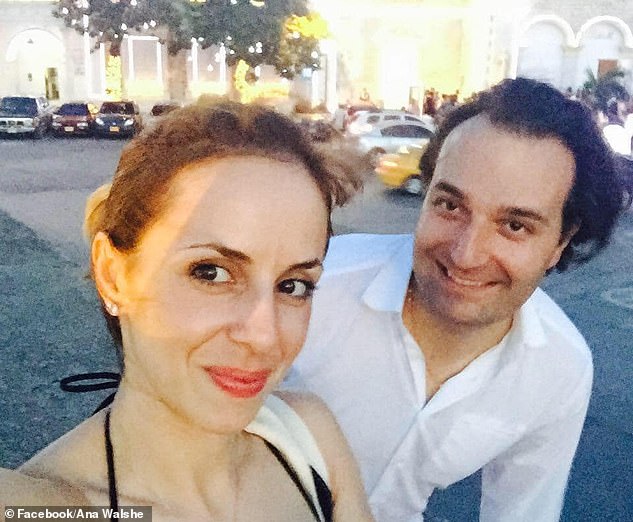 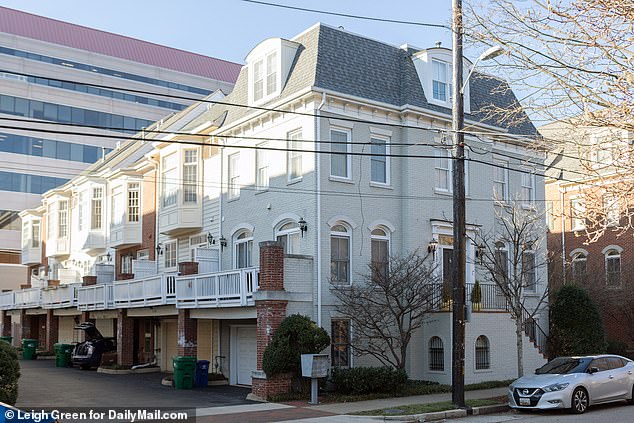 The Washington D.C. home of Ana and Brian Walshe worth upwards of $1.4million in the Chevy Chase area of the city

He was charged with fraud after allegedly selling two fake Andy Warhol paintings for $80,000 in 2016, meaning he is on house arrest pending his sentencing in federal court.

This means that he must report when he goes anywhere – but he was caught on camera going to Home Depot on January 2 after saying he never left the house except to take his son for ice cream.

Walshe was arrested on Sunday evening as detectives continued to search for his real estate executive wife.

She has not used her phone or credit cards since disappearing and has not shown up for work.

Walshe’s bail has been set at $500,000 in cash, after police searched the home the couple shared and discovered blood on a knife and in the basement.

Prosecutors at Quincy District Court say that Walshe’s statements, including claiming that he didn’t leave the house, delayed the investigation.

It is unclear who the blood belongs to, with prosecutors adding that Walshe bought himself time to ‘either clean up evidence, dispose of evidence, in causing a delay.’

Surveillance footage, which has not been released, from Home Depot showed him buying taps, mops, buckets, cloths and various kinds of tape.

Prosecutors say that the footage shows that he was lying about his whereabouts in the hours after his wife went missing. 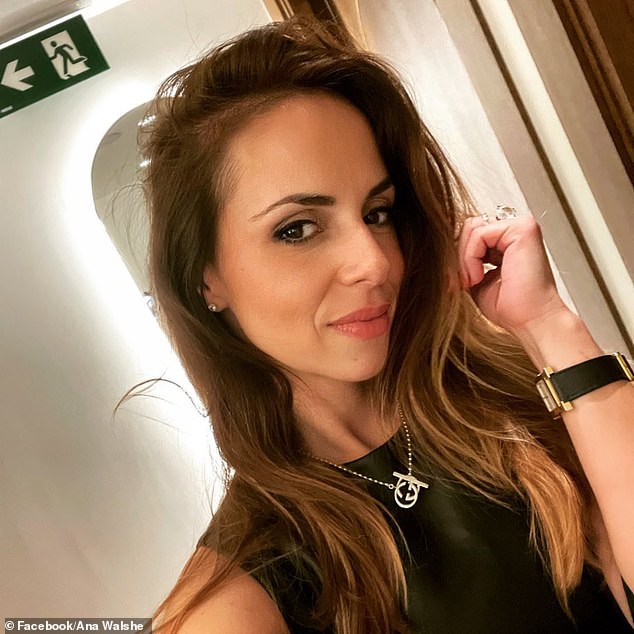 Ana vanished on January 1 when she failed to catch a flight to Washington DC for work. Her employer reported her missing on January 4 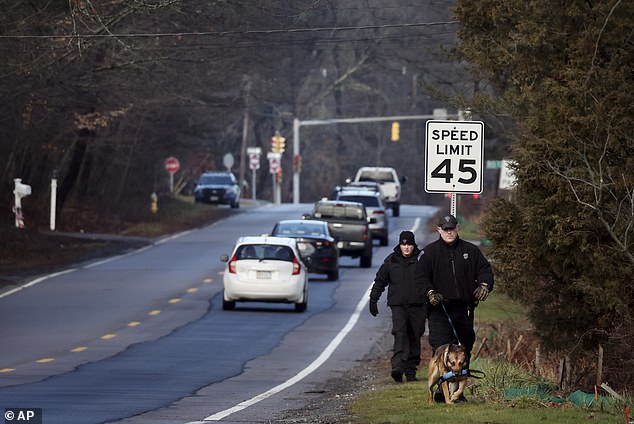 Police search a highway in Cohasset, Massachusetts, on January 7 for any sign of Ana – six days after she vanished 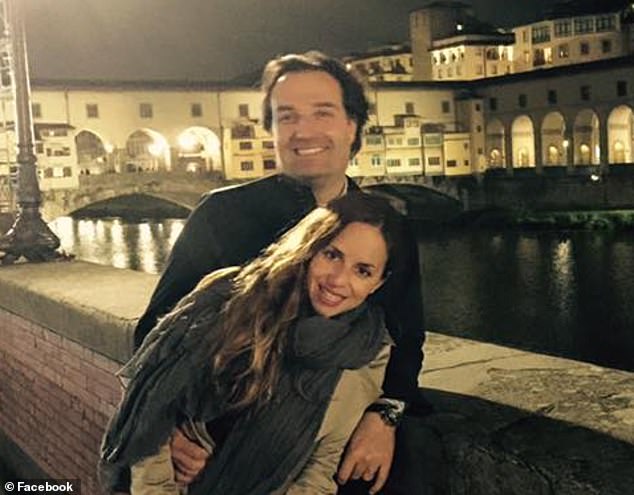 Prosecutors said Walshe gave cops misleading statements about his and his wife’s actions around the time of her disappearance, buying himself ample time to clean up a possible crime scene

Court documents show that he was wearing a black surgical mask, blue surgical gloves, and made a cash purchase in the store.

Walshe claimed that he went to Whole Foods and CVS on January 1, but there were no receipts or surveillance footage to back up his claim.

Her friends say her disappearance is out of character, as she would never abandon her three young sons.

The couple’s three young children are being looked after while the search for their mother continues.

Authorities initially said that Walshe was cooperating with the investigation before his sudden arrest on Sunday.