The Montreal Canadiens will be without forward Paul Byron for a game Thursday against the Columbus Blue Jackets that could make or break their playoff hopes.

The team confirmed Wednesday that the injured Byron would not be joining his teammates on the trip to Columbus and that his condition would be re-assessed daily.

Byron took an uppercut to the jaw in a fight with MacKenzieWeegar during the Canadiens‘ 6-1 win over the visiting Florida Panthers Tuesday. He wobbled off the ice with the help of a trainer and did not return.

“He brings a lot of speed and seems to always come up with clutch goals,” Habs goalie Carey Price said of the absent winger. “He is a big part of our locker room and our leadership group.”

In 54 games this season, Byron has 15 goals and 15 assists. His line with Nate Thompson and Jordan Weal has been clicking lately. The Canadiens are 9-10-4 when he is out of the lineup, and his loss could hardly come at a worse time.

“This is the biggest game of the year,” teammate Andrew Shaw said of the matchup with Columbus.

The Canadiens (41-28-8) are in the second wild-card spot with 90 points, one point behind Carolina and two points ahead of Columbus. Both the Blue Jackets and Hurricanes have six games remaining while the Habs have five.

The Blue Jackets would likely have the tiebreaker in the event the two teams are even at the end of the season since they have two more wins than the Habs. The Hurricanes, who host the Washington Capitals Thursday, have one more win than the Habs.

The Canadiens know the surest route to the playoffs would be to win their remaining games over the final 10 days of the regular season. 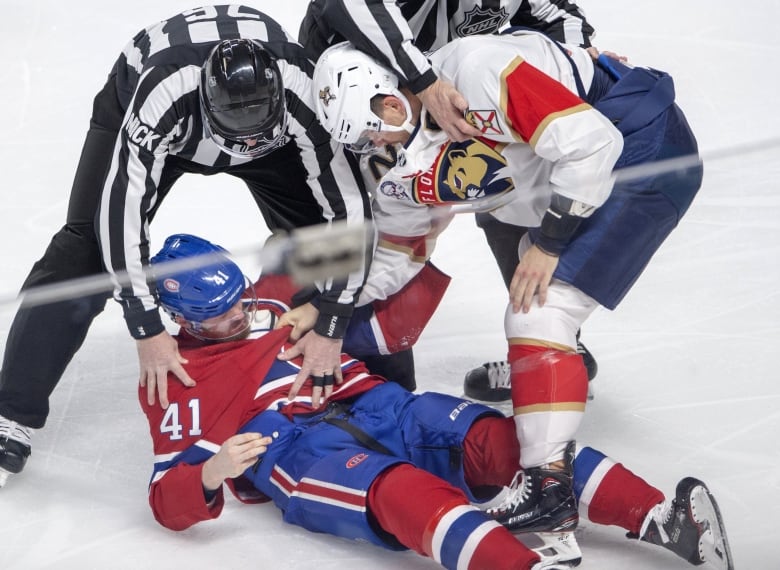 “All we wanted to do in the last 10 or 15 games of the season was build to become better, no matter who we play or where they are in the standings,” forward Phillip Danault said. “We want to become better every game. “

The Canadiens blew a one-goal lead on Sunday against the Hurricanes, losing 2-1 in overtime. The extra point handed to the Hurricanes could loom large at the end of the season.

The high-stakes game was part of a learning process for the team’s young nucleus.

“I have never played this time of year in games of this importance, when the playoffs are on the line,” defenceman Brett Kulak said. “Last year (with the Calgary Flames), we were out of the picture with maybe 20 games left. It is different when games are meaningful and you are getting good minutes. It is fun. We are enjoying it and learning a lot.”

The Canadiens’ quickly turned the page on their disappointing loss to Carolina, getting out some of their frustration by running roughshod over the Panthers.

Even though the match was physical, the intensity was not as high as two days earlier against the Hurricanes. The Canadiens will have to rediscover their intensity quickly against the Blue Jackets, who have shut out their opponents in their last two games.

“We will take all the confidence we can get,” Price said. “I said after the last game that points are more important than confidence. Moving forward, we need to stick with the same mentality.”

The Canadiens won their first two games against the Blue Jackets this season — 4-1 in Columbus on Jan. 18 and 3-2 in Montreal Feb. 19.