The married actress is known for more than just acting and began her first sex toy addiction during quarantine to ‘pass the time’ and she’s no stranger to raunchy products as she’s ‘tested a lot of vibrators over the years’ and wanted to to create one that ‘lead to great orgasms.’

Gwyneth, 49, partnered with sexologist and cofounder of modern sexual-wellness company Dame Products Alexandra Fine, 34, to launch the guide which includes 18 different sex toys made for ‘external, internal, both’ stimulation and some of the ‘most common’ vibrators ‘you’ll come across.’ 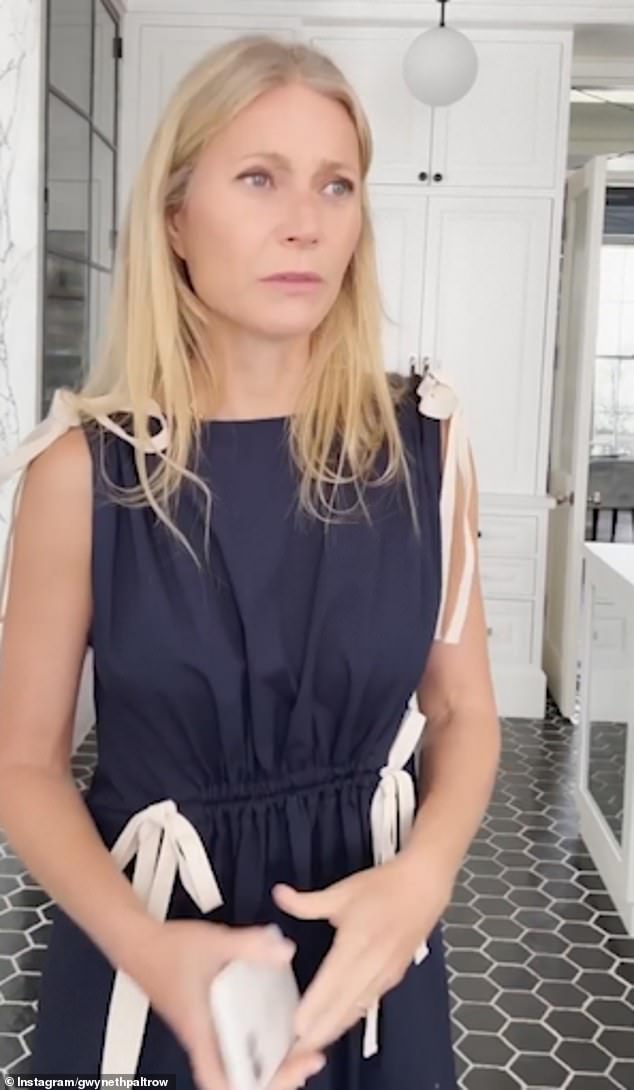 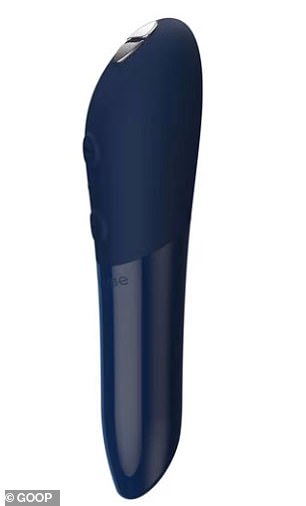 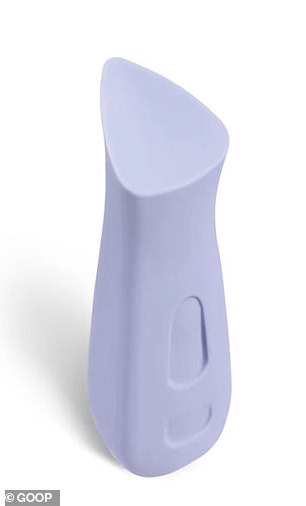 FOR PLEASURE FROM THE OUTSIDE

The brand kicked off its cheeky guide with the ‘basics’ of bullet vibrators.

Goop began by describing how brand-lovers can spot bullet vibrators by their ‘small’ design and added that they are ‘designed to be held between your fingers like a pen.’

When it came to how to use the small but mighty sex toys the brand noted that the most ‘obvious’ way to use one was by touching ‘its tip directly to the clitoris.’ And while Goop added that technique may ‘get you off’ they also gave readers an option to ‘dig a little deeper.’

A vibrating bullet’s ‘pinpointed vibrations’ make the perfect opportunity to ‘get  present an opportunity to get intimate with your vulva’s sweet spots.’ The raunchy guide finished off its bullet vibrators section by advising readers to draw ‘circles or figure eights around the vulva, or hold the side of the bullet flat’ to their vulva. 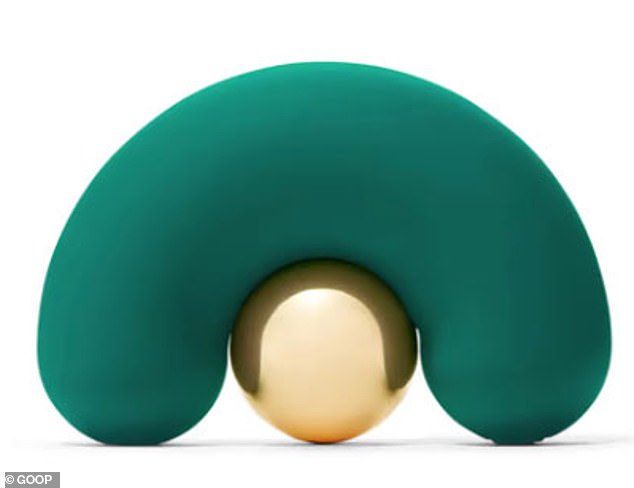 Last in the palm-size vulva vibrators is Goop’s newest release its very own Viva La Vulva which sells for $98 and is made for ‘ultraquiet’ but ‘deeply satisfying orgasms.’ 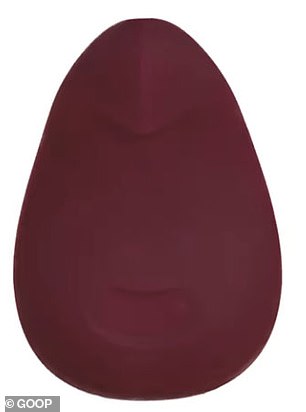 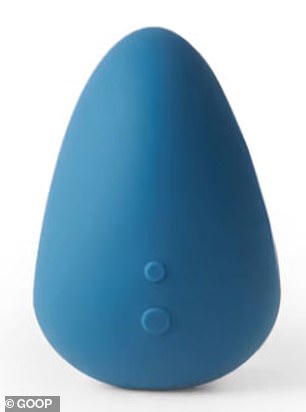 Palm-size vibrators are meant for ‘broader stimulation of the clitoris and vulva,’ says Goop adding that they should fit ‘fit comfortably in the palm of your hand.’

For those who are looking for solo play Fine loves these versatile vibrators because ‘you don’t have to grip them so hard,’ and recommends ‘palming the whole thing, pressing it against your body, and finding your rhythm from there,’ she added: ‘You can place the device beneath you and grind against it.’

And while Fine loves them for a night alone, she also says they’re ‘easy’ to use for couples play.’

Not only do these vibrators make the perfect toy in the bedroom, but they also ‘ make good whole-body massage tools,’ whenever you’re not quite in the mood. 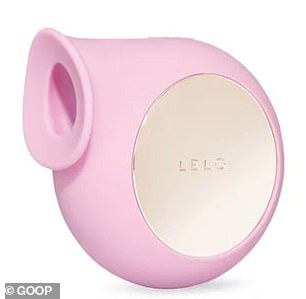 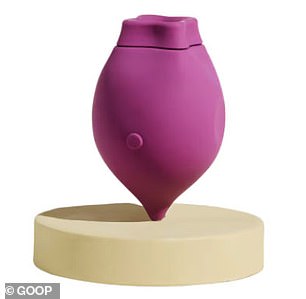 These devices are said to feel like ‘out-of-this-world oral sex,’ and have a reputation for ‘churning out orgasms in as little as five minutes.’

Air-pulsing vibrators go over the clitoris to ‘make an airtight seal and use pulses of air to create a sucking sensation.’

Goop gives its readers step by step instructions for how to use the device, beginning with turning the device on, cupping ‘its mouth over your clitoris,’ and adjusting the angle until you ‘find the angle where it best seals to your body.’ If can’t quite get a seal, Goop recommends adding a ‘bit of lube.’

And since these specific sex-toys can be pretty intense even at their lowest setting, Gwyneth recommends using the toy ‘over your underwear’ or ‘holding the toy just over your clitoris without touching your skin’ if you are extra sensitive. 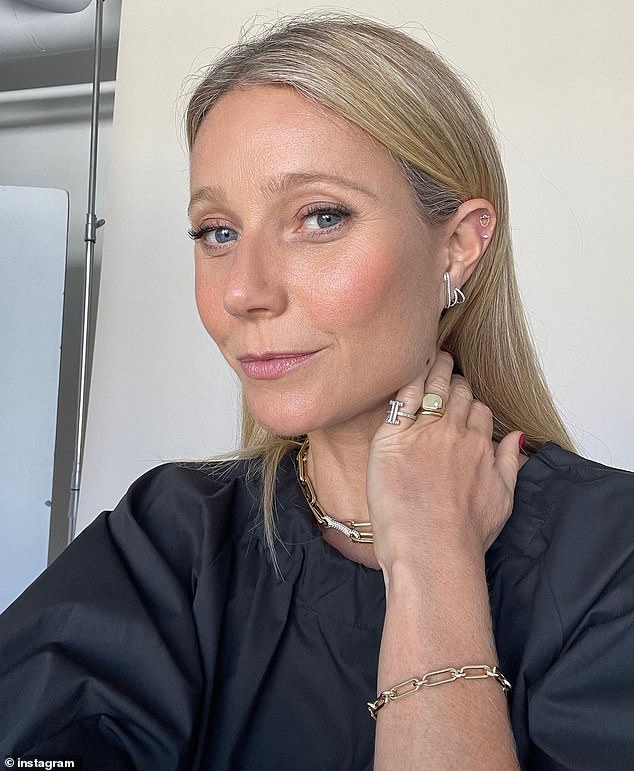 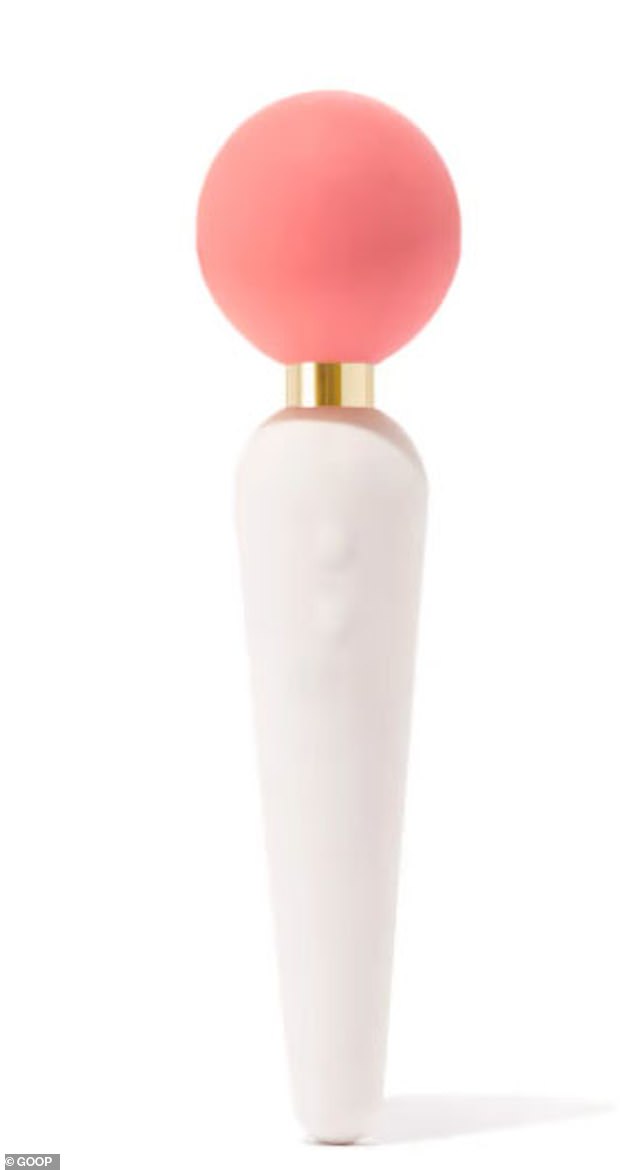 Wand vibrators seem to be the actress’s favorite sex toy and Gwyneth describes them as ‘magic’ adding that they are known for their ‘superior power.’

These sex toys are made for ‘intense clitoral stimulation’ and the lifestyle brand notes the devices are sure to ‘deliver.’

Since wand vibrators can provide extreme power, the strong vibrations can often be too much for ‘direct clitoral stimulation,’ so Goop recommends gently ‘touching the ball of the device elsewhere on your vulva or pressing it against the mons pubis—the fleshy area on top of the pubic bone (just north of the vulva).’

Fine even loves this device and notes that the long handle is great for partnered sex, ‘especially in situations where your penetrative partner is behind you, like doggy style or spooning. 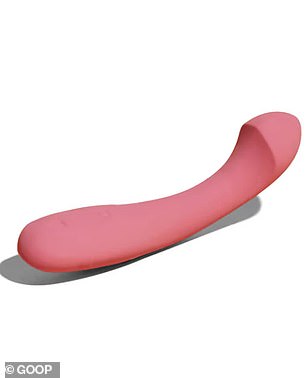 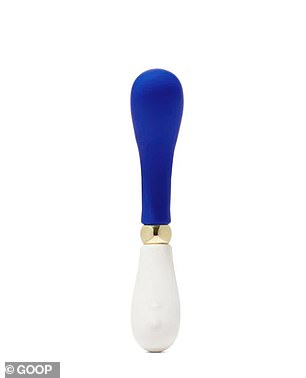 These curved vibrators are designed to stimulate the G-spot which is on the front vaginal wall.

And while these sex toys can provide ultimate pleasure, Fine recommends G-spot vibrators for spending some ‘quality time with your vagina.’ She adds that readers shouldn’t try to skip the ‘discovery phase.’

The ‘discovery phase’ is an important step because the G-spot isn’t a ‘distinct part of our anatomy.’ G-spot is a common term that describes the area of the vagina that ‘bumps up against the internal network of the clitoris and the sensitive erectile tissue that wraps around the urethra’

Once you find the G-spot, you can stimulate it by pushing gently towards the stomach and using ‘rocking motions.’

To use G-spot vibrators Goop says to ‘insert the curved end of a G-spot toy into your vagina and start mapping out where along its walls touch feels pleasurable and where it doesn’t.’

Its complete sex toy guide adds that somewhere between one to three inches in, you’ll find the sensitive area known as the G-spot.

Its last pick is Lora DiCarlo’s Onda which sells for $180 and makes for the ‘perfect companion. 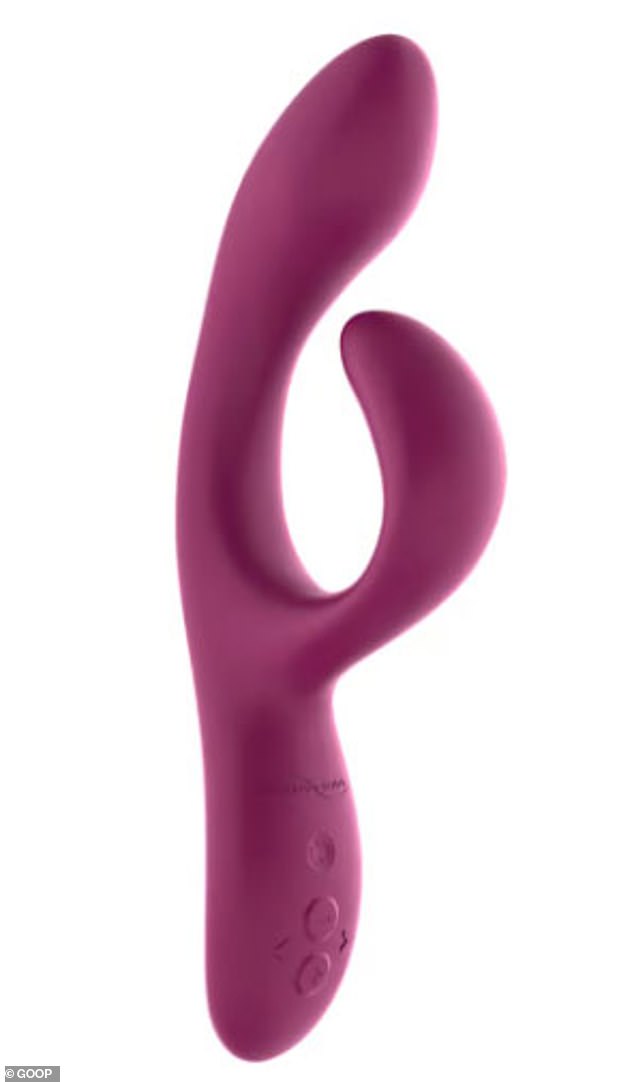 Goop says to insert the longer arm into the vagina and apply the same techniques used for G-spot vibrators like pressing towards the stomach and rocking against the device.

And while many find it a challenge to keep the shorter arm ‘on your clitoris as you move,’ Goop offers a few solutions.

The lifestyle brand recommends holding the short arm ‘down with a finger as you rock the device back and forth by its handle.’ 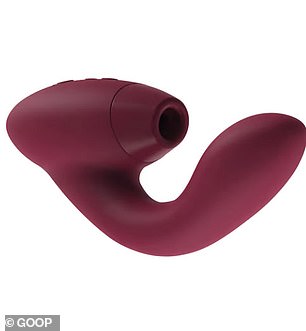 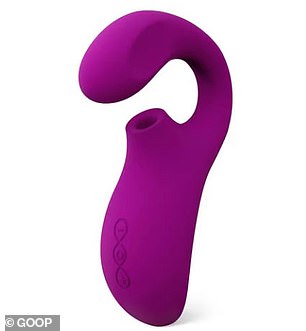 If you’re into firm pressure the lifestyle brand recommends the Womanizer Duo which sells for $219 and similar to other products, this one ‘feels a lot like oral sex’

Goops how-to for this device begins with inserting the long arm into the vagina and using lube, cup its mouth around your clitoris and ‘let it do its thing.’

After that start off with gentle motions until you find the best movement, Goop adds that ‘you don’t even have to move the device much or at all to get off.’

If you’re into firm pressure the lifestyle brand recommends the Womanizer Duo which sells for $219 and similar to other products, this one ‘feels a lot like oral sex.’

If you’d like some that ‘molds to the shape of your body’ its favorite is the $199 Lelo Enigma which is perfect for ‘building arousal’ or driving your climax home.’ 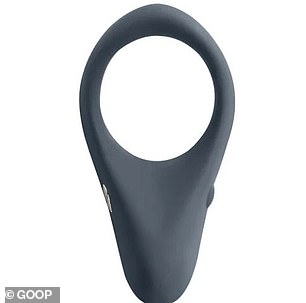 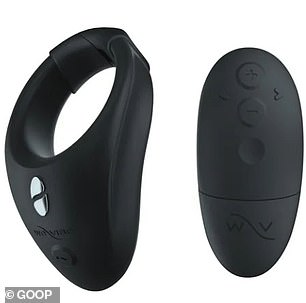 Goop recommends We-Vibe’s Bond which is $129 and ‘great for sensation on the penis and testicles,’ and We-Vibe’s Verge which sells for $119 and is ‘perfect for perineum pleasure

FOR PENIS AND PERNEUM STIMULATION

‘Made for penis-bearing people and their partners, vibrating cock rings hug the shaft of the penis (or loop around the testicles, too). Even those that vibrate gently make a major impact.’

Once you turn on the device ‘vibrations radiate’ through the ring to stimulate the ‘penis the testicles, and—depending on the device—the sensitive stretch of skin that makes up the perineum.’

Penis rings are perfect for partnered sex and Goop recommends positioning the head downward to allow the device to press into the body with ‘each thrust.’

And for the ‘receiving partner,’ the device can be positioned upward and used a clitoral stimulator.