Guy Pearce, Ian Smith, Annie Jones and Paul Keane led the original stars of Neighbours returning to the iconic soap for the final week of filming in Melbourne on Monday.

It’s the end of an era for the landmark Australian soap which is coming to an end after 38 years on the air.

Guy, who played Mike Young between 1986 and 1989, was spotted on set as the TV series began to film its final scenes.

In photos from the show’s Melbourne set, the Memento star could be seen slipping into a Triumph motorcycle jacket while standing next to his character’s motorbike.

Annie Jones, who played ‘Plane Jane’ Harris from 1986 to 1989 and again from 2018 to the present day, looked in good spirits as she arrived for filming.

The actress cut a glamorous figure for the day as she donned a bright red dress with a floral detail and daring leg split.

Wrapping up in a black blazer, the soap star added height to her frame with a matching pair of boots.

Original: Paul Keane (right) , who plays Des Bishop, was one of Neighbours 12 original characters and has been back on the soap as a regular since 2020 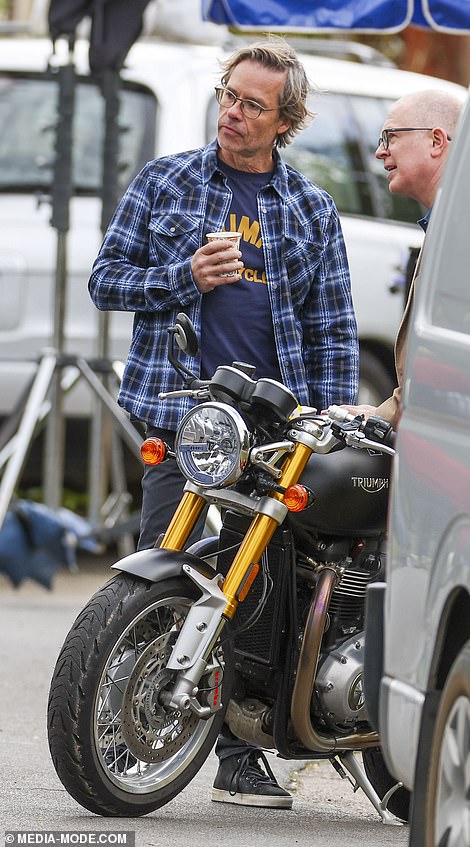 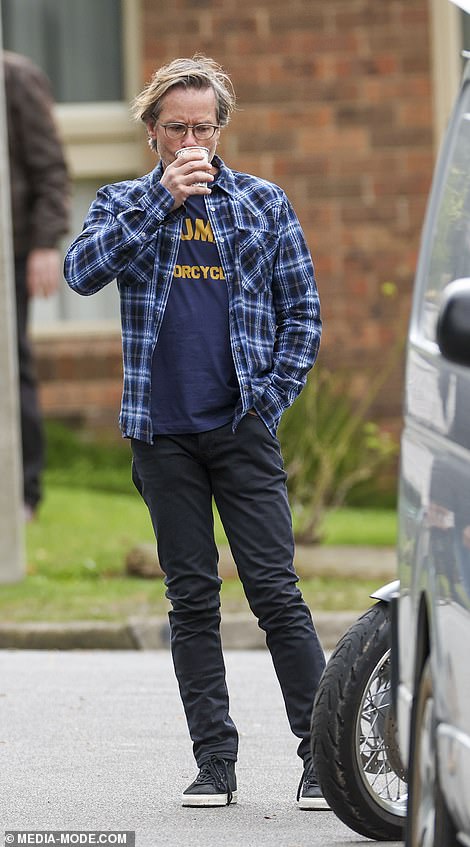 Iconic: Guy, who played Mike Young between 1986 and 1989, was spotted on set as the TV series filmed its final scenes this week 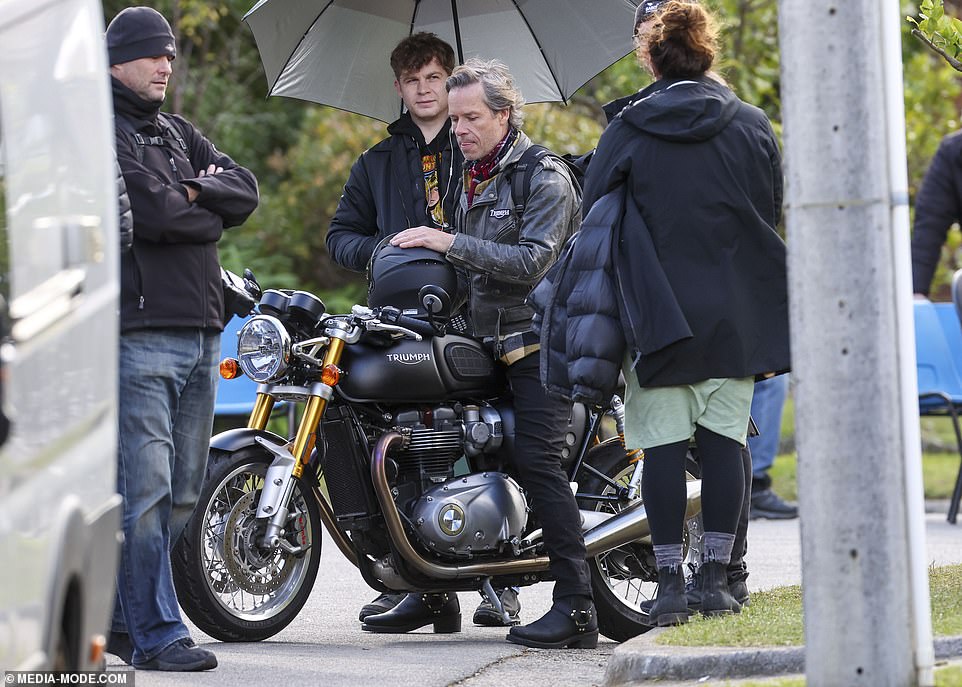 Suave: Guy looked effortlessly cool as he sported a black leather jacket and matching skinny jeans while preparing to film a scene on a motorbike

Neighbours announced that production would be ceasing on the long-running soap in a tweet back in March.

‘We are so sorry to say that after nearly 37 years and almost 9,000 episodes broadcast we have to confirm that Neighbours will cease production in June,’ the show wrote.

‘Following the loss of our key broadcast partner in the UK [Channel 5] and despite an extensive search for alternative funding, we simply have no option but to rest the show.

‘To our amazing, loyal fans, we know this is a huge disappointment, as it is to all of us on the team. We thank you for all your messages and support and promise to end the show on an incredible high. From here on, we are celebrating Neighbours.’

Network 10 addressed the end of the series in a statement to Australian media in March, admitting it had been a ‘difficult decision’.

‘Today, Fremantle confirmed that Neighbours will cease production in June, after nearly 37 years and almost 9,000 episodes,’ a network spokesperson announced.

‘This difficult decision came after the search for an alternative UK broadcast partner proved unsuccessful.’

They added that the series would ‘not air on 10 Peach beyond September 2022’, marking the end of its decades-long run.

‘A much-loved stalwart of our program schedule for over 35 years it has been a staple of Australian television drama, and Australian cultural exports,’ they added.

‘Ramsay Street, Erinsborough, is a cul-de-sac recognised all over the world and has been home to Scott and Charlene, Des and Daphne, Dr Karl and Susan, Dee and Toadie, Aaron and David and many, many more neighbours.

‘Network 10 thanks the cast, crew, all the production team and Fremantle for bringing the perfect blend of soap and sunshine to audiences in Australia and around the world.’

Channel 10 also praised ‘the Australian fans and audiences for their continued support of the series’.

‘Their encouragement particularly in the past few weeks has been incredible. It shows that our audience still want Australian scripted drama,’ continued the statement.

‘We have listened to them and there are exciting new local projects in the pipeline, which is great for our audience and for the local industry.

‘We are confident that the cast, crew and writers will bring their distinctive warmth, style and humour to the Neighbours set as they embark on filming the final episodes over the coming months.’

Fremantle, the production company behind the soap, said it had been unable to come up with ‘alternative funding’ for the series.

‘It is with sadness that after nearly 37 years and almost 9,000 episodes broadcast, we are confirming that Neighbours will cease production in June,’ Fremantle said.

‘Following the loss of a key broadcast partner in the UK, and despite a search for alternative funding, we currently have no option but to rest the show.

‘Everyone at Neighbours has been overwhelmed by the love and support from the audience since the news came out.

‘The show has brought a sunny slice of Australia into the homes of millions of viewers around the world launching the careers of dozens of household names along the way.

‘But as this chapter of Ramsay Street comes to a close, we promise to do everything we can to give the show the send-off it deserves.’