Not so very long ago — just last year in fact — a politician from Nevada called Lucy Flores accused Joe Biden of ‘inappropriate touching’ on the campaign trail. She alleged that, in 2014, Biden had sniffed her hair and planted a sloppy kiss on the back of her head in a manner that was both ‘awkward and disturbing’.

Days later, one of Biden’s leading rivals for the Democratic nomination spoke out in support of Flores — and a number of other women who’d publicly accused her opponent of touching them inappropriately — saying: ‘I believe them, and I respect them being able to tell their story and having the courage to do it.’

That rival was Kamala Harris, a Left-leaning Senator and former lawyer from California whose combative style has seen her variously described as a ‘tough, scrappy fighter who’s always counted out before she wins’ and the political equivalent of ‘the mum that knows exactly what’s going on and you’re all in trouble’.

Kamala Harris, pictured, would be the first woman and the first person of African-American and Indian-American heritage to become vice president if Joe Biden wins the White House

In an ensuing TV debate, Harris stayed true to this form, coming dangerously close to calling Biden a racist by pointing out that he’d opposed efforts to combat segregation during the 1970s, an allegation he described as ‘a mischaracterisation of my position across the board’.

Yet fast-forward 18 months and this mucky little tiff has been all but forgotten.

In fact, Harris is today preparing to be sworn in as Joe Biden’s Vice President.

If so, she becomes not only the first woman but also the first person of both African-American and Indian-American heritage to be given the world’s second most powerful job.

Given Biden’s age (he turns 78 later this month), her journey from stern critic to close ally of the new Commander-in-Chief could, crucially, have some way yet to run.

For were Biden unable to complete a full term — a development 59 per cent of voters think likely, according to one recent poll — she will automatically be handed the Presidency.

To Republicans, that represents a truly terrifying prospect. Indeed, while Biden is widely regarded as a centrist, 56-year-old Harris has chosen to side with progressives on a host of hot-button topics, including abortion, gun control and tax reform. 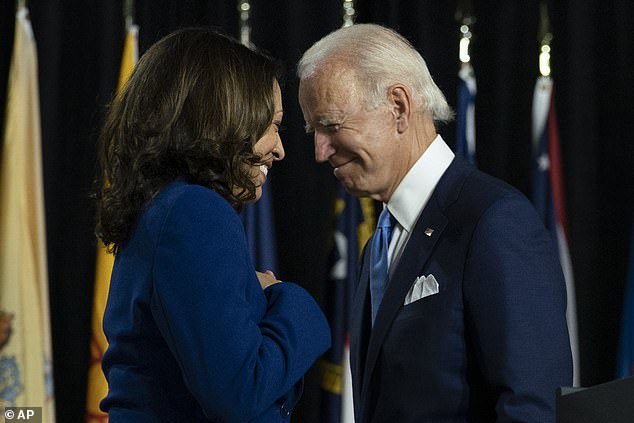 Some 59 per cent of voters believe Joe Biden, who turns 78 later this month, will not serve a full term as president and Republicans fear Kamala Harris in the White House

Meanwhile, recent months have seen her cutting taxes for the less affluent, decriminalising sex work, and legalising marijuana. In the wake of the Black Lives Matter protests, she also endorsed reforming the police.

All of which explains why the Trump campaign has repeatedly denounced her as a ‘Trojan Horse for the radical Left’s extreme agenda’.

Only last week, she was accused of peddling ‘Communist propaganda’ after Tweeting an animated video that preached the importance of equity — equal outcomes — rather than mere equality before the law.

During interviews, she’s repeatedly stressed her liberal credentials. In August, for example, she told a radio interviewer that she’d smoked weed ‘a long time ago’, while in college.

Elsewhere, Harris has often waxed lyrical about her early years. The daughter of immigrant students who met at Berkeley University in the early 1960s — father Donald is an economist from Jamaica while her late mother, Shyamala, hailed from India — she ‘grew up going to a black Baptist church and a Hindu temple’, and her early memories include being taken on civil rights marches in a pushchair.

Maya, her younger sister, once recalled that as a young child, Kamala ‘was writing letters to Nixon to stop the bombing in Vietnam before she could write her name’. 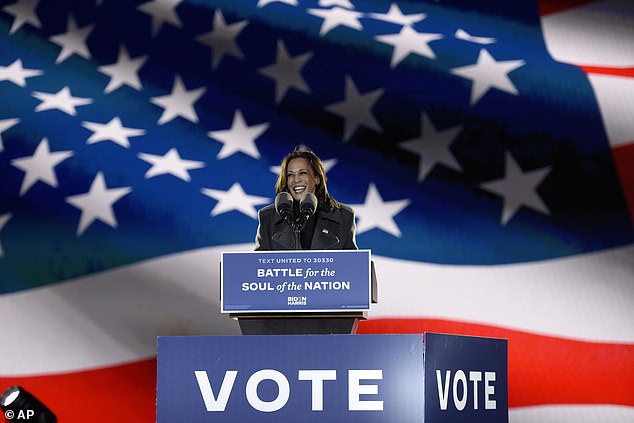 Ms Harris, pictured, tried to win the Democratic party nomination but run out of support and cash, although she now likely finds herself a heartbeat from the Oval Office

After her parents divorced, Harris was raised in Berkeley and then Quebec, Canada, before qualifying as a lawyer and moving back to California to work in the San Francisco prosecutor’s office in the early 1990s.

Her journey to prominence was then kick-started in somewhat scandalous fashion by Willie Brown, a colourful (and separated) former mayor of the city, with whom she embarked on a love affair in 1993.

Brown, who at 60 was more than three decades older than her, gave Harris two jobs on State Commissions, earning almost $200,000 a year, and supported her successful first campaign for elected office, which saw her voted in as District Attorney for San Francisco in 2003. Somewhat cynically, Harris has recently sought to erase her relationship with Brown from history, and he isn’t mentioned even once in her 2019 autobiography, The Truths We Hold.

In 2011, Harris was elected as Attorney General for the State of California, a role that made her the state’s ‘top cop’ and saw her controversially described by Barack Obama, during a campaign rally, as ‘by far the best-looking attorney general in the country’.

During her six years in the role, she simultaneously infuriated conservatives by backing a proposal for drug offenders to avoid prison by getting a high-school diploma, and angered liberals over her mixed record on the death penalty, and for pushing a hard-line plan to punish parents for their children’s truancy.

On a personal front, Harris also gained a husband — Doug Emhoff, a Jewish corporate lawyer with two children from a previous marriage, who is set to become America’s first ‘second gentleman’.

Then, at the 2016 election, she won a seat in the U.S. Senate where her lawyerly ability to aggressively cross-examine members of the Trump administration quickly saw her elevated to the status of rising star.

Soon, glossy magazines came calling — fashion bible Vogue described her signature look as ‘navy suit, matching ruffled blouse, black pearls, and stilettos’ that give her petite 5ft 4in frame ‘a few extra inches of height’ — and by June 2018 she was ‘not ruling out’ a Presidential bid.

At the start of 2019, she formally announced her candidacy for the presidency. While that didn’t quite work out (running short of cash and support, she quit the race in December), events may just have taken her all the way to the White House — where she now finds herself a heartbeat away from the biggest job of them all.