A man fell on to train tracks after being pepper-sprayed and tasered as he wrestled with two police officers on the platform.

Terrifying footage showed the man resisting arrest before stumbling towards the tracks at Redfern Station in Sydney was uploaded to TikTok on New Year’s Day.

One of the officers tries to wrench the man’s hands behind his back as the other holds a taser out in front of him. 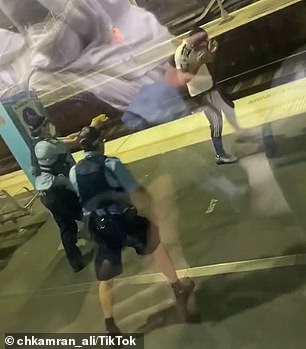 As the man continues to struggle one of the officers pepper-sprays him in the face prompting him to let go and hold his face in both hands.

The same officer then takes the opportunity to taser the man in his right arm causing him to stumble dangerously close to the platform edge.

The officers quickly realise the man is about to go over and race to catch him but are too late, with the man seen falling head-first onto the tracks.

Concerned commuters watching from a nearby train are seen rushing to the window to check if the man is ok, as others start filming on their phones.

One of the panicked officers motions to Sydney Trains staff that a man is on the tracks, while his colleague peers over the edge.

Two employees start to communicate over their radios as the police officers keep a close eye on the man below. 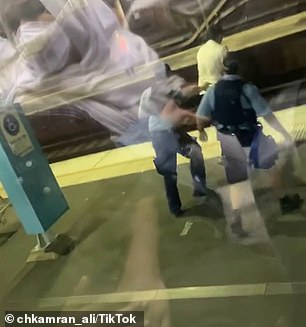 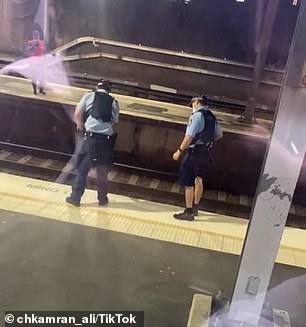 The video ends before the man is rescued from the train tracks, making some viewers question why nearby witnesses didn’t act quicker.

‘All these people just standing around,’ one viewer wrote.

‘That was obviously going to happen. Who on earth pepper-sprays someone on a train track,’ a second commented.

‘This whole charge can get dropped because he fell onto the tracks,’ a third said.

In a second video the man is seen sitting on a platform bench surrounded by six officers as one secures handcuffs around his wrists.

A NSW Police spokesperson said officers were called to the station at about 1:15am on Saturday to find two men fighting on the ground of the platform.

‘Police attempted to separate the men, but the pair continued to fight. Officers then deployed OC spray and the men separated and stood up,’ the spokesperson said. 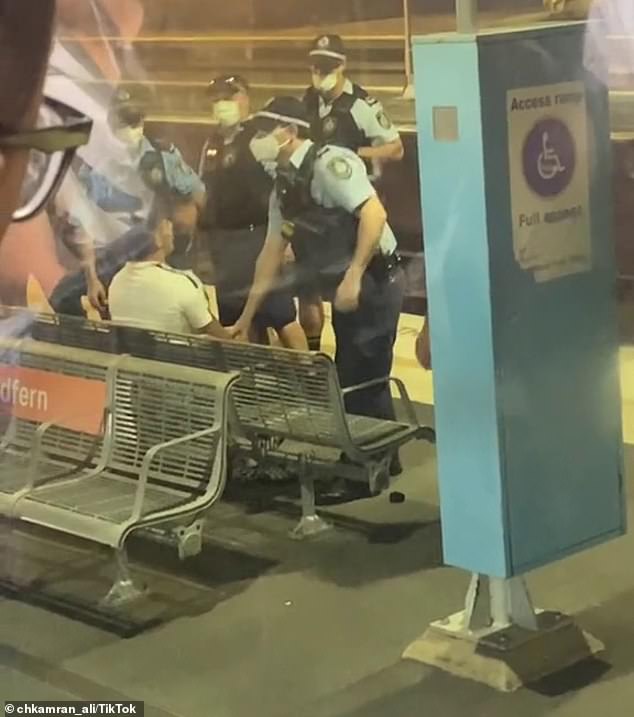 ‘One of the men, a 31-year-old, was arrested without incident however the other man, a 34-year-old, resisted police and a struggle ensued.’

The spokesperson said after the OC spray was deemed ineffective a taser was used on the man who then fell and rolled onto the tracks.

They said the man was safely returned to the platform with no reported injuries and was arrested and taken to Mascot Police Station.

The 34-year-old was charged with affray and resisting a police officer and granted conditional bail to appear in Downing Centre Local Court on February 14.

The 31-year-old man was issued a Court Attendance Notice for affray and is due to appear in Downing Centre Local Court on February 21.