A suspected gunman has been shot dead by police after going on a rampage killing two and injuring two others in five separate drive-by shootings across LA.

The suspect, only described as a man in his late 40s or early 50s, killed a newly married man and an Uber driver father-of-two during what police described as a ‘random’ shooting spree in downtown Los Angeles Tuesday morning.

At least one other person was shot but survived, while another was injured.

He then led police on a three-hour car chase that ended in a shootout on a freeway overpass, where the suspect was fatally shot.

Police said they are now probing whether the shootings were hate crimes as two of the shooting victims were Asian men, with one dying of his injuries.

It comes amid a surge in anti-Asian violence across America as well as a string of recent mass shootings.

A suspected gunman has been shot dead by police after going on a rampage killing two and injuring two others in five separate drive-by shootings across LA. LAPD and LA County coroner investigators on the scene of one of the shootings at 28th and Figueroa Streets 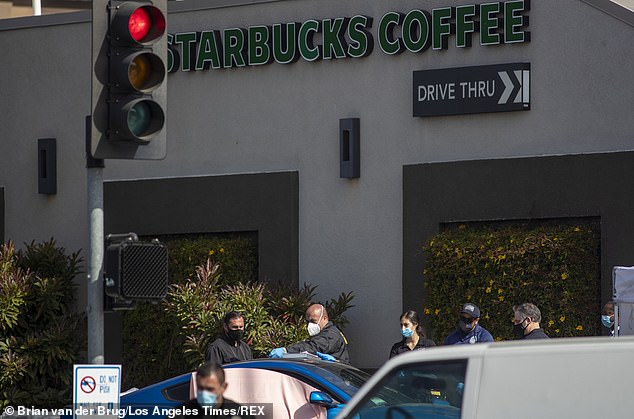 The Starbucks where one of the shootings occurred. The suspect led police on a three-hour car chase that ended in a shootout on a freeway overpass, where the suspect was fatally shot

Timeline of the LA shooting on April 27

LAPD officers respond to shooting at Figueroa/ Exposition in downtown Los Angeles, near the University of Southern California.

Officers find a adult male victim who had been shot at and suffered a graze-wound to the head.

The suspect was described as a male in a White Jeep, and with the help of the vicim’s dash cam, officers were able to send out a description and send information out to patrol units.

Shooting occurs near 28th St & Figueroa at a Starbucks drive-tru.

An adult male named 24-year-old Alexis Carbaja was shot in his car which he was in with his wife.

The man was pronounced dead, but his wife survived with minor injuries.

A male motorist is shot at 7th & Figueroa. He was pronounced dead at the scene.

The victim is believed to be 42-year-old Mingzhi Zhu of South Pasadena, an Uber driver with two children.

Some time after, the car is disabled after spike strips are used by officer on the WB 91 Freeway at the Raymond overpass in Fullerton.

SWAT officers attempt to negotiate with the suspect, but return fire when he shot through his windshield at them – killing the man.

The drive-by shootings began around 12:55 am near the University of Southern California when the suspect, who was driving a white Jeep Cherokee, pulled up alongside a victim’s vehicle at Figueroa Street and Exposition Boulevard, police said.

The suspect allegedly fired multiple rounds at the victim, a Korean speaker, who suffered a bullet graze wound to his head. The victim is expected to survive.

LAPD Chief Michel Moore said a dashboard camera inside the victim’s vehicle captured part of the shooting and the Jeep’s license plate, which helped officers circulate a description of the car.

About 10 minutes later, another shooting occurred less than a mile away in a Starbucks drive-thru, at 28th St & Figueroa.

The suspect drove alongside another another vehicle in-line for the Starbucks and backed into it, causing a slight crash, police said.

The suspect then fired into the vehicle, killing a newlywed who was driving with his wife, Moore said.

Police believe there was a ‘verbal exchange’ between the couple and the gunman, but Moore did not know what was said.

His wife was also injured but it is unclear at this time if she was shot or injured by shrapnel.

The second deadly shooting occurred around 1:25 am, about 3 miles away from the second scene.

An Asian man was driving when the gunman pulled up next to him and began firing through the window.

The coroner identified that victim as 42-year-old Mingzhi Zhu of South Pasadena.

Zhu was an Uber driver and was on his way to pick up a rider, the company said in a statement that called the shootings senseless and heartbreaking. 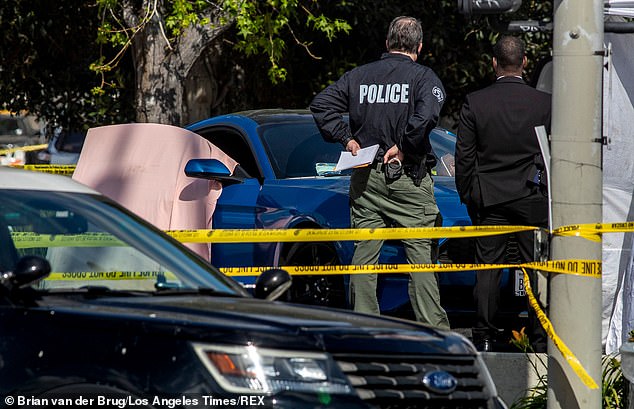 One person was killed at a Starbucks drive-thru above. The suspect, only described as a man in his late 40s or early 50s, killed a newly married man at the site before killing an Uber driver father-of-two during what police described as a ‘random’ shooting spree

He leaves behind a wife and two children – an 8-year-old son and 2-year-old daughter.

The gunman then continued on the rampage, opening fire on a vehicle in an intersection.

Officers spotted the suspect’s Jeep and began a long pursuit, which included the suspect firing at a white Tesla while driving.

The driver was not injured.

Police used spike strips to disable the Jeep on an overpass in Fullerton around 3:30 am, when a standoff with LAPD SWAT officers began.

SWAT pinned the Jeep in and attempted negotiations aimed at having the suspect surrender, Moore said.

But the suspect began firing at the officers through the vehicle’s front windshield, and an officer returned fire, he said.

The man allegedly shot at police a second time, prompting the officer to return fire again.

‘This appears to be random acts of violence,’ he said.

‘We have no idea what precipitated this.’

A GoFundMe page has been set up to cover the costs of Carbajal. The page confirmed he was one of the victims of the shooting in the early hours of Tuesday.

‘We the family of Alexis Carbajal, are asking for support during this tough time. He was one of the victims of the shootings that occurred on April 27, 2021 in Los Angeles, CA,’ the page said.

‘He was only 24 years old and left behind his Mother, sisters, and wife. He didn’t deserve this, he was a gentle soul who always put others before himself, he could light up any room and was such a caring person.’ 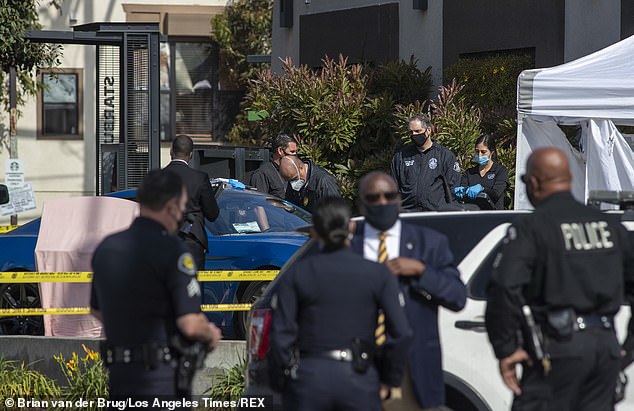 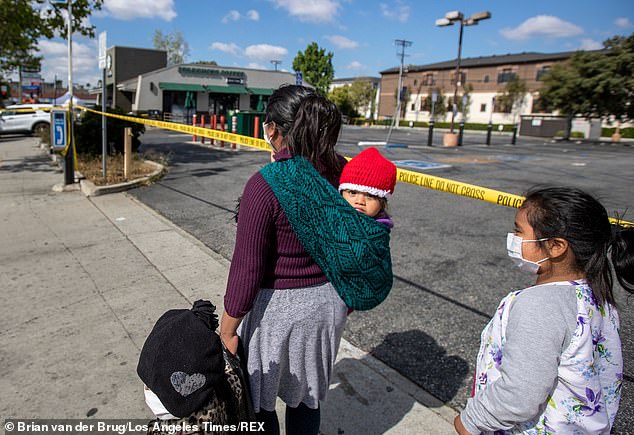 Police said they are now probing whether the shootings were hate crimes as two of the shooting victims were Asian men. People walk past the crime scene

However, authorities are pursuing a possible line of inquiry that the shootings were anti-Asian hate crimes, the Los Angeles Times reported.

‘We are very mindful of the potentiality for that, and leaning into that very actively,’ Moore said.

Police are also investigating if the man is connected to any other crimes.

‘We’ll be going back to the suspect´s home, talking to family members, trying to figure out what led to these acts of violence,’ Jovel said.

The shooting rampage comes amid a surge in violent crime in LA. 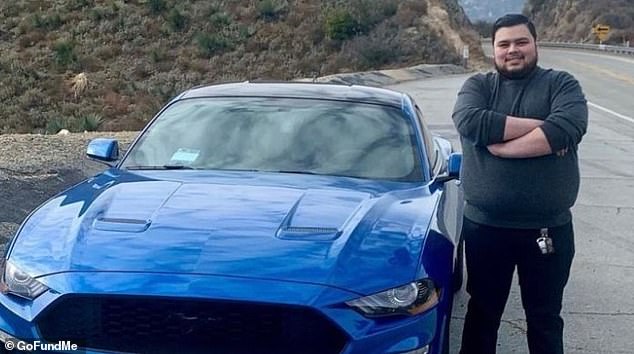 Alexis Carbajal was one of the victims of the shootings that occurred on April 27, 2021 in Los Angeles, CA. He was only 24 years old and left behind his Mother, sisters, and wife

The number of people shot in the city has increased 73 percent this year, compared with the same time period in 2020.

On Saturday, 34-year-old Richard Solitro was shot and killed following a car crash with police.

Solitro got out of his vehicle and, holding his hand behind his back, began counting down ‘3… 2… 1’ as he started to bring his hand out, police said.

At least one officer fired, fatally striking him.

Police said they did not find a weapon on the scene. Solitro was previously shot by police in Rhode Island in 2018.

The shooting spree in LA also marks the latest in a string of mass shootings across America in recent weeks which have prompted Joe Biden to clamp down on gun laws.

Back on March 16, Robert Aaron Long, 21, is accused of killing eight people – six of them Asian women – in a series of attacks at three Atlanta spas.

The following week, gunman Ahmad Alissa then allegedly shot dead ten people including a police officer, in a supermarket in Boulder, Colorado.

The next day, a shooting at a Southern California office building left four people dead, including a child.

Eight people were shot and killed at the FedEx Ground facility in Indianapolis earlier this month.

The president has unveiled a series of executive actions designed to curb gun violence following the string of shootings.

The six actions include: a crackdown on the proliferation of ‘ghost guns,’ which are built from kits; tighten requirements on pistol braces that allow for more accurate shooting; the Department of Justice will publish ‘red flag’ legislation for the states; invest in evidence-based community violence interventions; and DoJ will issue an annual report on gun trafficking.

Biden said mass shootings are a ‘public health crisis’ and argued he was not trying to impinge on the Second Amendment – a claim gun rights groups and Republicans have made against the introduction gun control laws.