A guest house worker sexually assaulted two female visitors after switching off CCTV cameras and letting himself into their rooms.

One victim thought her husband was touching her as she slept but she woke to find his back turned and John Guntipilli-Souriappan standing at the end of their bed.

Just minutes earlier, the 35-year-old had assaulted another guest after letting himself into her room and turning off the lights.

Leeds Crown Court heard the ordeals were described as ‘like something that happens on TV and in the films’ and ‘the stuff of nightmares’.

Prosecutor Clare Walsh said the married couple booked a room in Avalon Guest House in Woodhouse, Leeds, as they were attending the Rod Stewart concert in First Direct Arena on December 11 last year and paid Guntipilli-Souriappan £50 for the room on arrival.

She said the couple returned to the hotel at around 1.15am the following morning before having sex and falling asleep.

The woman, who was only wearing a vest top and a bra and laying on her side, woke up to someone rubbing her back and thought it was her husband.

Ms Walsh said: ‘She then felt something at her feet. In a sleepy state, she thought it was her dog as she has a dog at home.

‘She kicked her legs out and got up and went to the bathroom. She did not turn the light on.’

The woman got back into bed and briefly went back to sleep on her side.

She was awoken by someone rubbing her back and touching her vagina.

Again, she thought it was her husband but when the hands turned her onto her back she saw her husband laying with his back to her.

Ms Walsh said: ‘Of course she knew at that stage that it could not be him. She woke up [her husband] and he was able to turn the light switch on.

‘When the light went on, she saw a male standing at the end of the bed.’

Guntipilli-Souriappan ran from the room with the couple chasing after him.

They lost him but he returned to the room and asked them what the problem was.

He said he would ring the manager but the woman’s husband said he was ringing the police.

Police were called and advised the couple to stay in their room with the door locked.

Guntipilli-Souriappan went outside and called the manager who came to the room but the couple refused to let him in.

Police arrived and found the defendant in his room, which was beside the dining room.

That afternoon, another guest contacted police and told them that Guntipilli-Souriappan had sexually assaulted her. 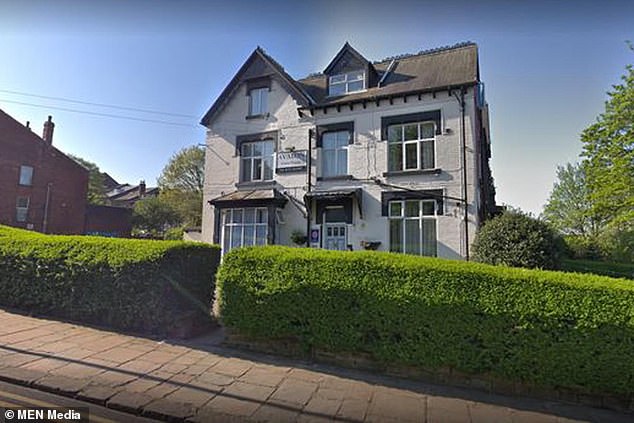 Just minutes earlier, the 35-year-old had assaulted another guest at the Avalon Guest House after letting himself into her room and turning off the lights

The woman said she had booked a room in the guest house and returned from her work’s Christmas party at about 1.30am.

There was a problem with the key and she rang the manager who told her someone would let her in.

Guntipilli-Souriappan let her in before knocking on the door of her room. When she opened the door, no one was there so she closed it.

There was another knock at the door and this time Guntipilli-Souriappan was there, speaking broken English and asking her about shouting and arguing.

The woman told him her boyfriend was not with her so the noise had not been coming from her room.

Guntipilli-Souriappan put his arm around her, hugged her, kissed her cheek and then kissed her neck.

He told her he would return to the room but she told him not to.

A few minutes later, the door was unlocked with a key, Guntipilli-Souriappan entered the room and he turned off the lights.

The woman used the torch on her phone to illuminate the room and Guntipilli-Souriappan approached her and touched her right thigh.

His arm also brushed past her chest.

She then told him to leave, which he did, and she left the guest house to stay with a friend.

CCTV footage from the hotel showed Guntipilli-Souriappan walking around the guest house but the cameras were turned off between 2.05am and around 3.30am.

The court was told Guntipilli-Souriappan then targeted the married woman as his ‘appetite had not been satisfied’.

He has two previous convictions for battery and breaching a restraining order in relation to his wife.

She said Guntipilli-Souriappan, his wife and his children left India after he suffered a religiously-aggravated assault and he may have to apply for asylum to avoid being deported after serving his sentence.

He was jailed for three years and eight months.

Det Insp James Entwistle, of Leeds District CID, said: ‘The two victims in these incidents have been left understandably traumatised by what Guntipilli-Souriappan did to them.

‘They would have rightfully had an expectation of privacy and security in their rooms as guests at these premises but he completely abused his position of trust to commit these offences against them for his own gratification.

‘We hope the fact he has now had to answer for his actions will help to provide some degree of comfort and reassurance to them and assist their recovery from what was clearly a very disturbing experience.’