After it was split from the pharmaceuticals giant, Haleon stock joined the exchange in London, in Europe’s biggest stock market listing for a decade, priced at 330p – but it ended the day at 308p.

That valued the company, which owns brands including Sensodyne toothpaste and Panadol painkillers, at around £28billion – enough to catapult it straight into the ranks of the FTSE 100.

Wobbly start: Haleon, which owns brands including Sensodyne toothpaste, joined the exchange in London with shares priced at 330p but they ended the day down at 308p

But this was lower than the £50billion offered by consumer goods giant Unilever earlier this year – an approach that was quickly rejected by GSK’s management.

Haleon is also saddled with £10billion worth of debt which it inherited from GSK following the separation – a large burden compared to other companies in the sector and around four times its estimated earnings for this year.

But the price is expected to recover today when the firm conducts a share consolidation.

Chris Beckett, head of equity research at investment manager Quilter Cheviot, said while Haleon’s debut was ‘certainly at the lower end’ of expectations, he was upbeat on the company’s prospects.

‘The fact [that Haleon’s market cap] is a little lower than expected means there is scope for investors to build a meaningful position and potentially capture some upside,’ he said. 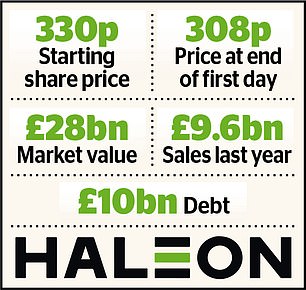 Victoria Scholar, head of investment at Interactive Investor, said Haleon’s listing was ‘a win for the London Stock Exchange post Brexit’ as it would reduce the market’s reliance on commodity and financial stocks such as miners, oil firms and banks.

Haleon is cutting loose from GSK at a turbulent time as soaring inflation forces consumers to cut back on spending.

But chief executive Brian McNamara told the Sunday Times that the company’s products are smaller and less exposed to rising commodity prices than larger consumer goods and as such are less likely to be cut from shopping lists as household budgets are squeezed. ‘We’re in health categories that matter,’ he said.