‘This has been two years of living hell’: Ex-Tory MP and Boris Johnson aide Ross Thomson says he can ‘draw a line’ after official inquiry throws out false claims he groped a Labour MP that ended his Westminster career

Groping claims which ended the Westminster career of a Tory MP who helped Boris Johnson win the Conservative Party leadership have been thrown out by an official inquiry.

The Parliamentary Commissioner for Standards said allegations made against Ross Thomson by the former Labour MP Paul Sweeney, which included trying to thrust a hand down the front of his trousers while in Parliament’s Strangers’ Bar in 2018, were unfounded.

Mr Thomson, who coordinated Mr Johnson’s leadership campaign in Scotland, opted not to run for re-election at the 2019 general election because of the allegations made against him.

He said in a statement today that he looked forward to ‘drawing a line under this ordeal’ after two years of ‘living hell’.

Ross Thomson, pictured holding a phone to take a picture with Boris Johnson in May last year, opted not to contest the 2019 general election 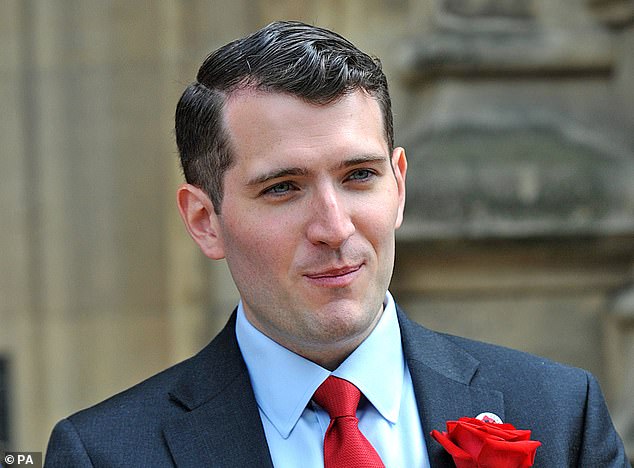 Paul Sweeney, a Labour MP who lost his seat in 2019, alleged he had been molested by Mr Thomson in a House of Commons bar in 2018

Who is Ross Thomson, the ex-Tory MP who helped Boris Johnson become PM?

Ross Thomson became the first Tory MP to represent the constituency of Aberdeen South since 1992 when he won the seat at the 2017 general election.

But the 33-year-old was only in Parliament for two years after he decided not to contest the 2019 general election.

He made that decision after Labour MP Paul Sweeney accused him of groping him in Parliament’s Strangers’ Bar.

Mr Sweeney went public with the claims relating to an alleged incident in October 2018, in November 2019.

Mr Thomson strenuously denied any wrongdoing as he said he would stand down.

The Aberdeen South seat was subsequently retaken by the SNP at the snap poll last December.

Mr Johnson had relied on Mr Thomson, previously an MSP in the Scottish Parliament, to serve as his Scotland campaign chairman.

Mr Sweeney, who lost his Glasgow North East seat to the SNP at the election last December, went public with claims against Mr Thomson, who was MP for Aberdeen South, before the poll.

He alleged he had been molested by Mr Thomson in the House of Commons bar in October 2018.

The Parliamentary Commissioner for Standards has now finished an investigation into the allegations and has cleared Mr Thomson of any breach of Parliament’s misconduct policy, The Times reported.

The Commissioner also concluded that Mr Thomson’s behaviour was not sexual in nature.

The Times said Mr Sweeney had declined to comment on the outcome of the probe. He has the right to appeal.

The Commissioner said that witness accounts did not support the claims made by Mr Sweeney and added they ‘cannot safely conclude that this complaint presents as a malicious one’.

The Commissioner ruled there was insufficient evidence to find Mr Thomson had groped Mr Sweeney.

Mr Thomson said in a statement published on Twitter this morning: ‘The Parliamentary Commissioner for Standards will not uphold complaints made against me last year and I welcome this decision.’

Mr Thomson said it was ‘regrettable that I had to wait this long to clear my name’ but that he was ‘satisfied that the independent inquiry was both extensive and robust’.

He said: ‘The last two years have been a living hell, with these false allegations triggering a barrage of unfair headlines and unrelenting abuse on the street and online.

‘I was forced to give up the job I loved, making myself and my office staff unemployed.

‘Furthermore my reputation has been irreparably damaged by these lies.’

He added: ‘I am currently exploring all legal avenues and I look forward to drawing a line under this ordeal and finally moving on with my life.’