Greta: ‘There is no Planet B, there is no planet blah’

Greta: ‘This is not about some expensive politically- correct green act, bunny hugging, or blah blah blah’

Greta Thunberg mocked Boris Johnson today as she opened a youth climate summit in Italy – accusing the Prime Minister and other world leaders of making ’empty promises’ over global warming.

The teenage campaigner poked fun at a speech by Mr Johnson in April in which he referred to ‘bunny hugging’, and also criticised eco-friendly buzzwords used by politicians in recent weeks such as ‘no Planet B’, ‘green economy’, ‘Net Zero’ and ‘climate neutral’.

The activist, who rose to fame thanks to her ‘school strike for climate’ protests in her native Sweden, added: ‘This is all we hear from our so-called leaders: words, words that sound great but so far has led to no action.

‘Our hopes and dreams drowned in their empty words and promises. Of course we need constructive dialogue, but they have now had 30 years of blah, blah blah. And where has that led us?

Speaking at the Youth4Climate pre-COP26 conference in Milan, she attacked governments for ‘shamelessly congratulating themselves’ while making insufficient pledges to cut emissions, and claimed politicians ‘invite cherry-picked young people to meetings like this to pretend that they are listening to us, but they are not’.

But Conservative MP Steve Baker was unimpressed by her comments, telling MailOnline today: ‘I would encourage Greta Thunberg to stand for election in Wycombe and explain to the public in Wycombe, many of whom are hard pressed working people, what it would actually mean to implement her policies.

‘It is increasingly clear that the cost of Net Zero includes dramatically unaffordable changes to all our lives. It is thanks to environmental extremism that we are not using the shale resources in our own country and as a result our gas prices are soaring.’ 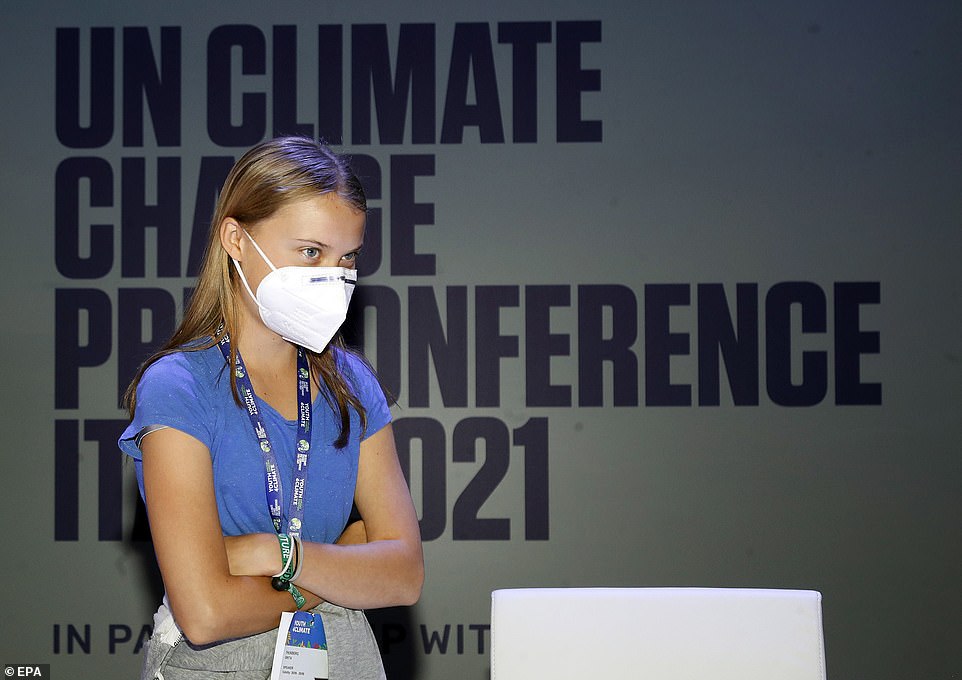 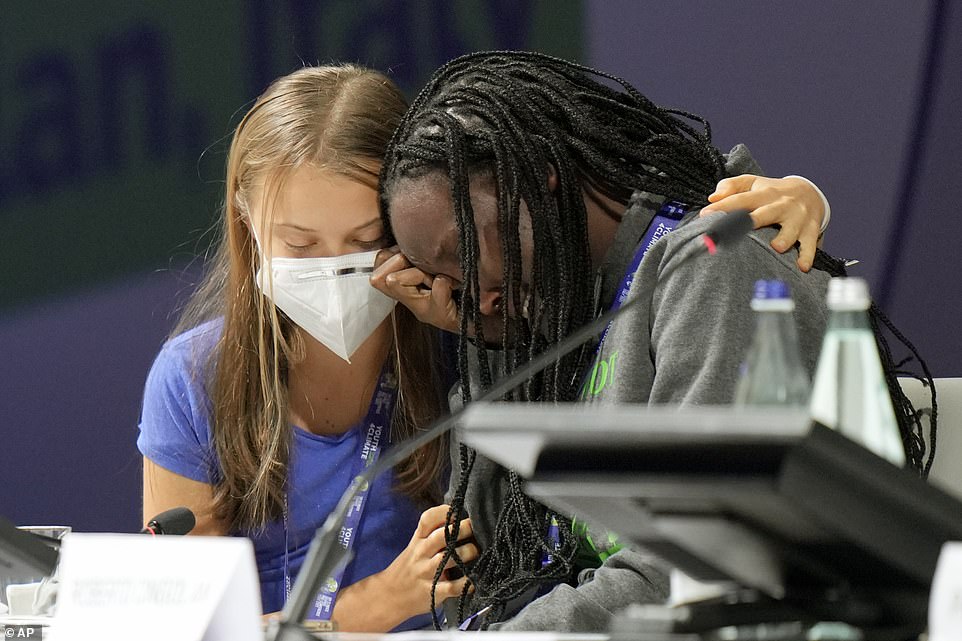 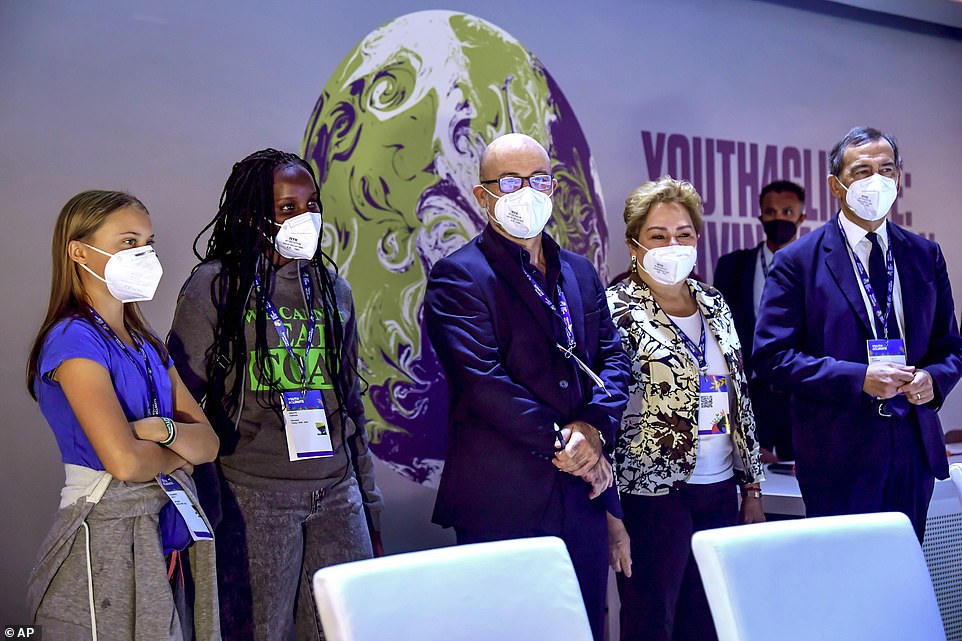 Mr Johnson made the ‘bunny hugger’ remark during a virtual climate summit in April this year, when he also used the phrase ‘build back better’.

‘There is no planet blah’: What Greta Thunberg told youth climate summit

‘This is all we hear from our so-called leaders: words, words that sound great but so far has led to no action – our hopes and dreams drowned in their empty words and promises. Of course we need constructive dialogue, but they have now had 30 years of blah, blah blah. And where has that led us? Over 50 per cent of all our CO2 emissions have occurred since 1990, and a third since 2005.

‘All this while the media is reporting on what the leaders say they are going to do, instead of what they are actually doing. And then not holding leaders accountable for their action, or rather inaction. Don’t get me wrong, we can still do this. Change is not only possible but urgently necessary.’

‘Right now, we are still very much speeding in the wrong direction. 2021 is currently projected to experience the second highest emission rise ever. Only about 2 per cent of government recovery spendings have been allocated to clean energy measures, and according to a new report by the UN, global emissions are expected to rise by 16 per cent by 2030 compared to 2010 levels.

‘Our leaders’ intentional lack of action is a betrayal towards all present and future generations. The people in power cannot claim that they are trying because they are clearly not. If this is what they consider to be climate action, then we don’t want it.

‘They invite cherry-picked young people to meetings like this to pretend that they are listening to us, but they are not – they are clearly not listening to us and they never have. Just look at the numbers. Look at the statistics. The emissions are still rising – the science doesn’t lie.

‘But of course we can still turn this around. It is entirely possible. It will take drastic annual emission cuts unlike anything the world has ever seen. And as we don’t have the technological solutions that alone can deliver anything close to that, that means we will have to change.

He said at the time: ‘What I’m driving at is this is about growth and jobs… ‘We can build back better from this pandemic by building back greener.’

It is not the first time that Miss Thunberg has picked up on the remark, changing her Twitter status to ‘bunny hugger’ just a day later in response.

Her latest remarks were made at the summit in Milan – a three-day event attended by 400 young representatives from 190 nations which will be used to develop climate policies.

“How long are we to watch them die of thirst and gasp for air in the floods? World leaders watch this happen and allow this to continue.”

The summit runs until September 30, and marks the first days of the Pre-COP conference – a summit of energy and climate ministers from around the world in preparation for the full COP26 meeting in Glasgow later this year.

On the final day of the youth summit, the young representatives will present their policies to ministers – with the best taken to Glasgow for discussion by world leaders.

Miss Thunberg arrived at the summit after a seven-hour train journey from Frankfurt – where she has been pressuring Germany’s election candidates over climate change.

She was swarmed by reporters at the station, while she waited to take a mandatory Covid test.

When asked what she was expecting from the talks, Miss Thunberg gave a typically-downbeat assessment – replying ‘not a lot’ before adding that it will be ‘just like any other meeting, with lots of talking.’

Miss Thunberg was addressing the Youth4Climate portion of the Pre-COP conference, which is the last formal meeting between climate energy ministers from around 50 nations ahead of the main COP26 summit in November.

The aim of Pre-COP is to lay the groundwork for high-level deals to be struck at COP26 itself, when it is hoped major economies will commit to drastic cuts in carbon emissions with the aim of reaching ‘net-neutral’ by 2050.

During the youth event, some 400 young delegates from 190 countries will hold round-table discussions and workshops to develop climate policies that will be presented to ministers on the final day of the meeting.

The best will be taken to the COP26 summit itself, to be discussed by world leaders and their teams. 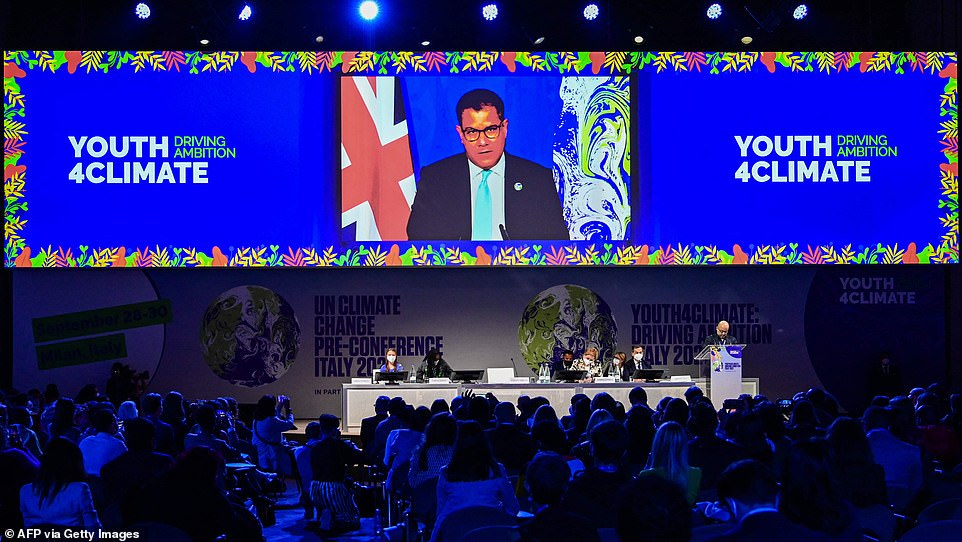 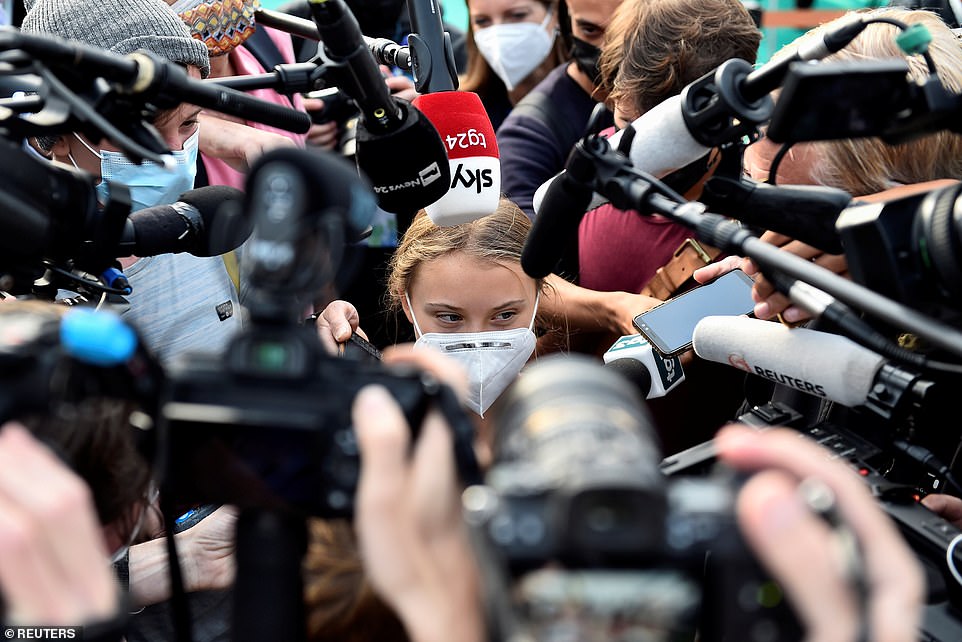 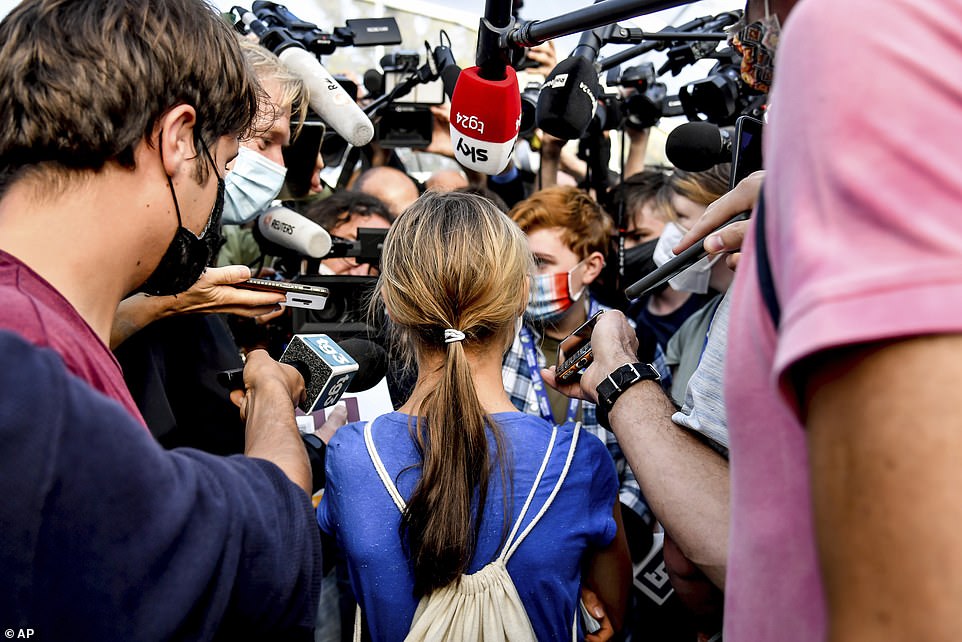 ‘Build back better’: Where the phrase comes from

Build back better is a political slogan that dates back at least as far as the 2004 Indonesian tsunami when it was used to describe rebuilding efforts that aimed to correct long-standing problems in communities devastated by the disaster.

It was then incorporated into a 2015 UN report designed to reduce the risks from natural disasters, which stated that one of the aims of disaster recovery should be to ‘build back better’.

The phrase then gained new prominence this year when the US and UK announced their Covid recovery plans, both of which were named ‘Build Back Better’.

The British plan incorporates the so-called ‘levelling-up’ agenda to promote economic growth across the country, Boris’s vision of a ‘global Britain’ and a pledge to hit ‘net zero’ carbon emissions by 2050.

Events were originally scheduled to take place in 2020, but have been delayed by a year due to the Covid pandemic.

Also addressing the event was Alok Sharma, the UK minister serving as president of COP26, who said the time has come for bolder commitments from world leaders to cut greenhouse gas emissions.

Sharma said the response of world leaders to the climate change crisis to-date has not come anywhere close to the scale of the challenge.

The U.N. COP26 conference in Glasgow in November aims to secure more ambitious climate action from the nearly 200 countries who signed the 2015 Paris Agreement.

At that summit, world leaders had agreed to try to limit human-caused global warming to 1.5C – a target the UN has since warned is likely to be missed.

In a report published in August this year, UN experts said humans are ‘unequivocally’ to blame for climate change and that irreversible damage has already been caused.

It also laid out a grim vision of what will happen in the years ahead even if drastic action to cut emissions is taken immediately, calling it a ‘code red for humanity’,

But, the report was keen to point out, there is no ‘cliff-edge’ for climate change – a point at which the situation becomes hopeless and action is not worth taking.

Every degree the planet warms will make life harder – including more frequent droughts, forest fires, flooding, hurricanes and extremes of temperature – while every action to limit the damage will make things easier.

Mr Johnson has vowed to make the UK a world leader in reducing emissions with ambitious plans to replace gas boilers with hydrogen and a ban on the construction of fossil-fuelled cars including hybrids from 2033.

However, he has been facing pressure to explain exactly who will end up footing the bill – with some estimating the measures could end up costing the average household £28,000. 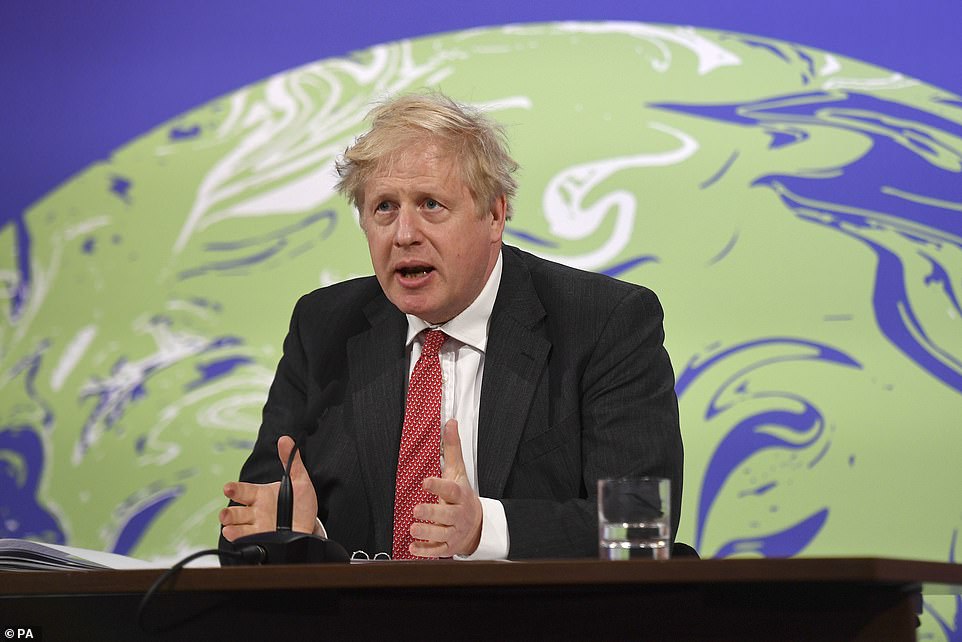 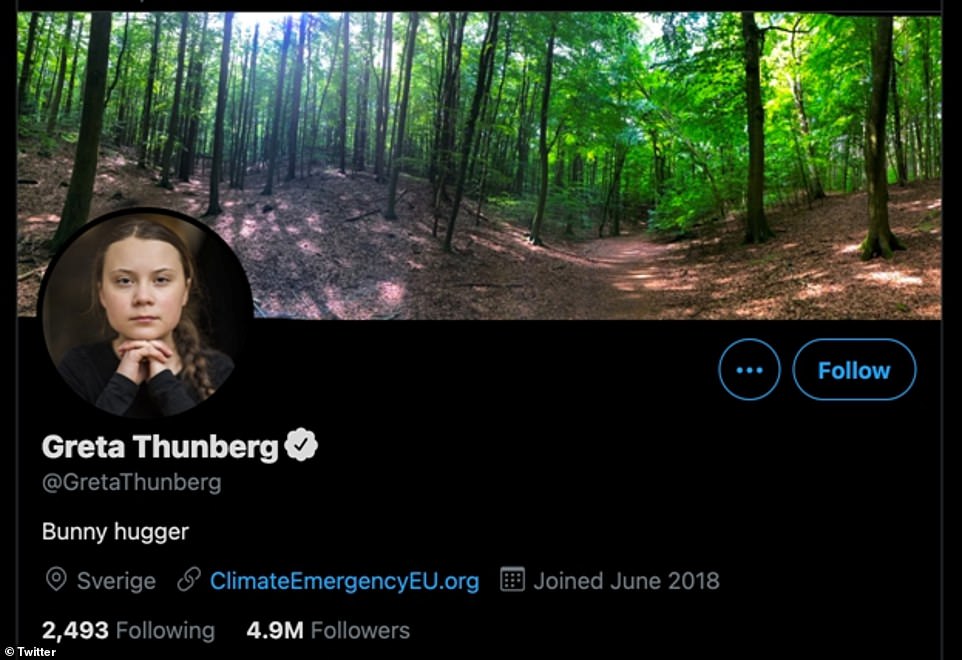 Greta Thunberg has poked fun at Prime Minister Boris Johnson, changing her Twitter profile to ‘Bunny hugger’ after he use the phrase in his speech at Thursday’s Climate Summit