The inquiry into the Grenfell Tower disaster has spent £117million of public money so far, according to figures released yesterday.

But survivors and relatives of the victims are no closer to seeing those responsible for the inferno put on trial.

They will have to mark the upcoming fourth anniversary of the blaze in the knowledge that no one has been charged with any offence in connection with the tragedy.

Documents show that the long-running public inquiry into the 2017 disaster, which claimed 72 lives, has spent £77million in the past two years.

In total, the inquiry has spent £50million on legal representation for the ‘core participants’, which includes the bereaved, survivors and local residents.

The legal fees of the Fire Brigades Union, which represents rank and file firefighters, and the Fire Officers’ Association were also paid for out of this fund.

Just under £17million has gone on the wages of the chairman, panel and legal counsel of the inquiry.

A further £27million has been spent on the operational costs of the inquiry, which includes the hire of the various hearing rooms which have been used.

It has spent almost £11million on experts who have had to carry out fresh scientific investigations to understand how the building products used on Grenfell react in a fire.

The bill does not include the tens of millions spent on lawyers and public relations firms by the companies and organisations which were involved in the disastrous refurbishment of the West London tower block. 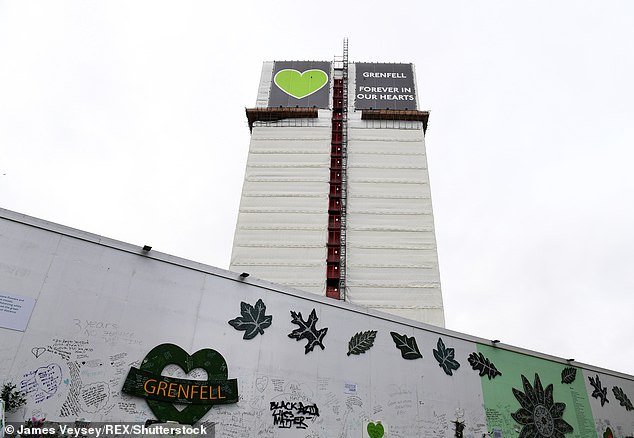 Arconic, the global construction firm which made the flammable cladding on Grenfell, revealed in 2019 it had spent £30million on lawyers and advisers. That figure is expected to have soared in the past two years.

Last night a source close to the inquiry told the Mail: ‘This figure of £117million may sound a lot, but this is one of the most complex public inquiries ever held in the UK.

‘Survivors and the families of the victims need top lawyers because that’s the only way they’re going to get the answers they deserve.’ The inquiry, which has been delayed by the pandemic, is likely to conclude in 2022.

Relatives fear it could take Sir Moore-Bick until at least 2023 to publish his final report with a further wait of two years for police and prosecutors to decide what charges, if any, can be brought.

The Metropolitan Police is investigating a range of possible crimes including gross negligence manslaughter, which can attract long prison terms.

Police have told relatives and survivors that no decision on charges will be made until the completion of the second phase of a public inquiry.

The Met had interviewed 17 people by early September 2019, but has refused to provide a further update. More individuals are said to be under scrutiny.

Scotland Yard has described the Grenfell probe as ‘one of the largest and one of the most complex criminal investigations that we have ever undertaken’.

There are 45million documents in digital form and police have also seized more than 14,500 physical exhibits.