Prince Andrew could be forced to quit up to nine military roles as legal action against him comes to a head this month and growing anger about his ‘toxic’ friendship with convicted child sex trafficker Ghislaine Maxwell.

The Duke of York has not been at a single military event since he stepped back from royal duties two years ago over allegations he had sex three times with one of Jeffrey Epstein’s young ‘slaves’.

If he fails to get Virginia Roberts Giuffre’s civil case against him thrown out of a New York court this week, military chiefs have said that it is time for him to go.

One source told the Daily Express: ‘Events are moving very quickly. The Duke of York could be forced to give up all of his military titles in a matter of weeks’, adding that Andrew’s friendship with Maxwell and Epstein was ‘toxic’ and made his position ‘untenable’.

The final decision on military titles falls to the Queen, but military insiders hope he will quit to avoid being sacked by his mother.

Today it also emerged the Grenadier Guards officers ‘are uncomfortable having to drink to the health of Prince Andrew at the end of regimental dinners’ – as the first veteran goes on the record saying he should step down as regiment’s Colonel ahead of key court battle in New York.

This afternoon a legal document the Duke of York’s lawyer believes will stop the civil sex lawsuit against the royal is expected to be unsealed and made public.

Prince Andrew, 61, inherited his ceremonial role as colonel of the Grenadier Guards from his father, the Duke of Edinburgh, in 2017 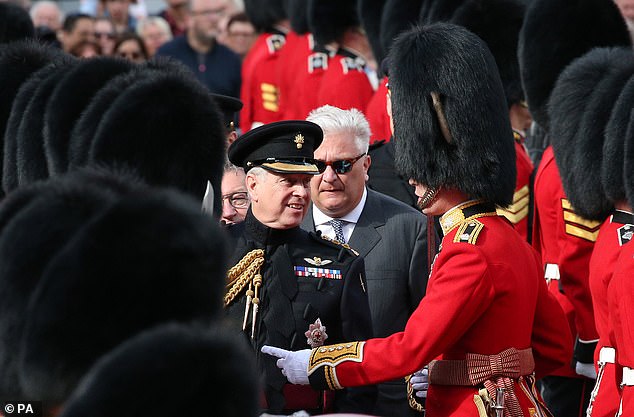 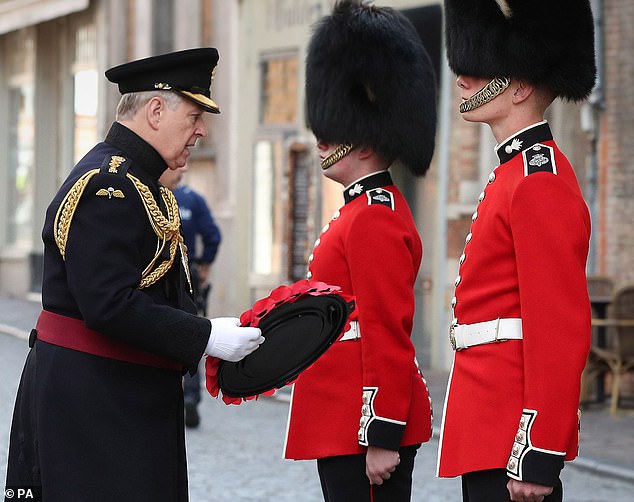 The Duke of York, in his role as colonel of the Grenadier Guards, lays a wreath at the Charles II memorial in Bruges in 2019

Prince Andrew, 61, inherited his ceremonial role as colonel of the Grenadier Guards regiment from his father, the Duke of Edinburgh, in 2017.

He is now facing renewed pressure to give up his military titles after his former friend Ghislaine Maxwell was convicted of child sex-trafficking for her partner sex offender Jeffrey Epstein, The Times reports.

Former lance sergeant and three-time veteran of Afghanistan, Julian Perreira said: ‘Being allowed to retain his role as colonel of the Grenadier Guards and other military titles, Prince Andrew will put a stain on the regiment’s proud history and will devalue the hard work of past and future generations of Grenadiers.

‘He must step down immediately.’

It is the latest blow for the beleaguered Duke of York, who has staunchly denied claims by Virginia Roberts Giuffre, 38, that she was forced to have sex with him on three occasions in 2001 while she was held as a teenage sex slave by Epstein.

Ms Roberts’ civil claim against the duke is expected to reaching a turning point tomorrow, when a New York court unseals a confidential 2009 deal between Epstein and the alleged victim.

Prince Andrew’s lawyers are hopeful that Ms Roberts’ agreement with Epstein could block her civil lawsuit, as they insist its terms protect him from any litigation. Federal judges said they can see no reason why the agreement should remain private.

The duke, who famously served in the Falklands in 1982, holds a total of nine military titles which may only be withdrawn by the Queen. 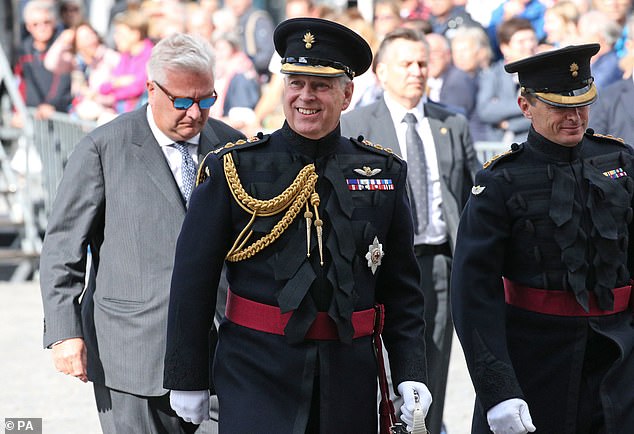 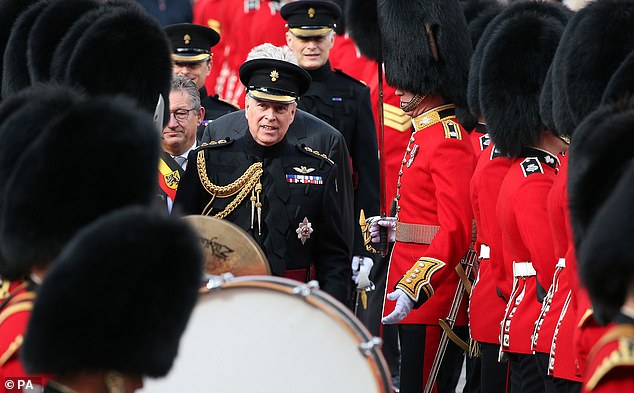 In August, the Queen apparently ‘let it be known’ that she wanted the Duke of York to continue as colonel of the Grenadier Guards

Prince Andrew suffered a setback in his US sex case, after admitting he has no proof over his infamous claim he cannot sweat and also seeing the judge throw out an attempt to stall the case.

Lawyers for his accuser, who is suing the prince for damages in a New York civil case, have demanded he hand over evidence he does not perspire, as he said in a car crash Newsnight interview two years ago when denying her allegations.

But his legal team said ‘no documents exist in his possession, custody or control’ to back the claim.

Retired colonel Richard Kemp said: ‘If she decides it would be right for Andrew to forfeit his military titles she will do so, putting her duty to the forces above any family considerations or personal views.’

In August, the Queen apparently ‘let it be known’ that she wanted the Duke of York to continue as colonel of the Grenadier Guards, even though he has largely cut back from other royal duties.

The Sunday Times reported today that royal courtiers had discussed proposals to stop the prince using his royal title if he loses the civil lawsuit brought by Ms Roberts.

Such a move would also likely sever the prince’s remaining links to various charities and lead to a possible ‘internal exile’.

On Friday, the prince’s effort to block Ms Roberts’ lawsuit on the grounds that she no longer lives in the US was rejected by a federal judge.

Judge Lewis A. Kaplan, in a written order, told the prince’s lawyers they must turn over documents on the schedule that has been set in the lawsuit brought by Ms Roberts.

She says she was abused by the prince on multiple occasions in 2001 while she was being sexually abused by financier Jeffrey Epstein. The prince’s attorney, Andrew Brettler, called the lawsuit ‘baseless.’