Gregor Townsend has called on Scotland to channel the spirit of Paris as they prepare to host in-form Australia in Sunday’s Autumn Nations Series clash.

The head coach is delighted that he has been able to name a team featuring 14 of the 15 players who started the Six Nations victory away to France in March, with the injured Rory Sutherland the only absentee from that side.

That was the first time the Scots had won in Paris for 22 years, and – despite the fact almost eight months has elapsed since then – Townsend is hoping the feelgood factor from that match can be built upon.

He said: ‘I couldn’t believe that 10 days ago we had all 15 players available that started that game but just as I mentioned it to a coach, Rory Sutherland got injured in training.

‘It’s a unique situation in rugby that we can select from such a similar group. Those players showed their togetherness and resilience in Paris.

‘That was one of the best performances I’ve been involved in with this group in terms of the way we started it, the way we managed it, the way we had to defend when we were a man down on two occasions, and then we came back to win. 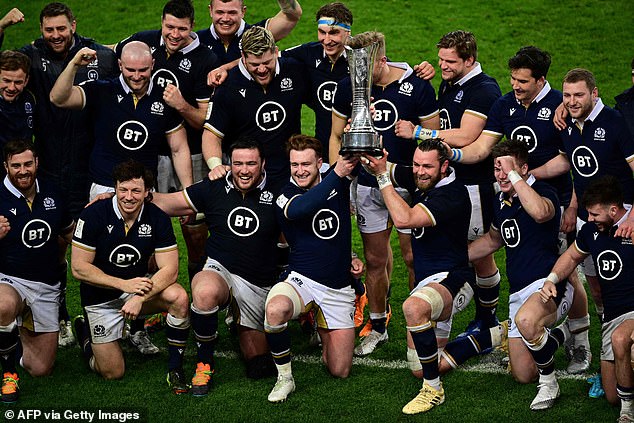 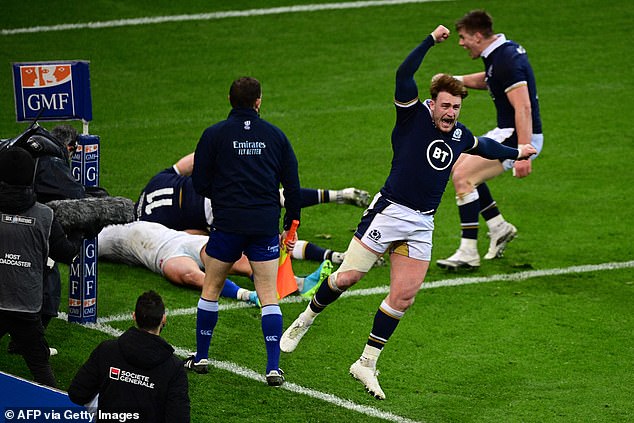 Despite playing with 14 men, Scotland came from behind to clinch a famous win in France 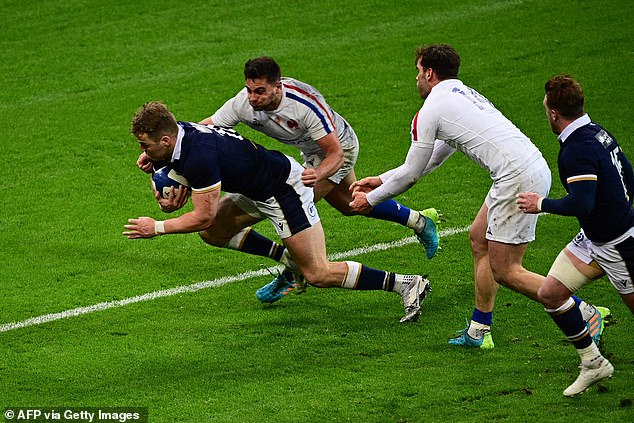 ‘Even though it has been almost eight months, this group know they have been a team before, a winning team.

Scotland have played only one match since then – last weekend’s routine 60-14 win over Tonga.

Australia, by contrast, have managed to squeeze in 11 games since July and have won each of their last five. Townsend admits Australia could have an edge in that regard. 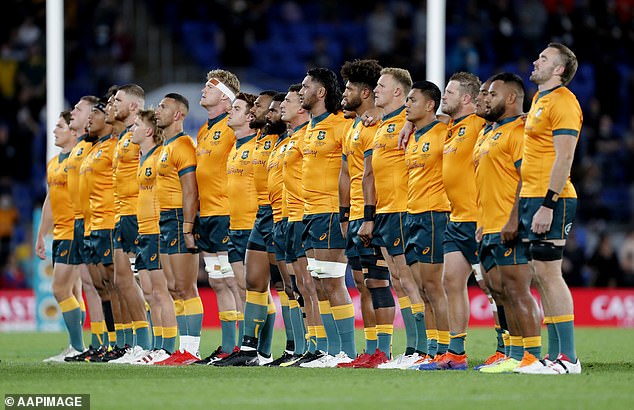 He said: ‘It could be a concern. This is our first game with this team for more than seven months.

‘We have been playing games at club level, so players have been getting battle-hardened, some more than others.

‘The learning that the Australians have been exposed to has been fantastic. 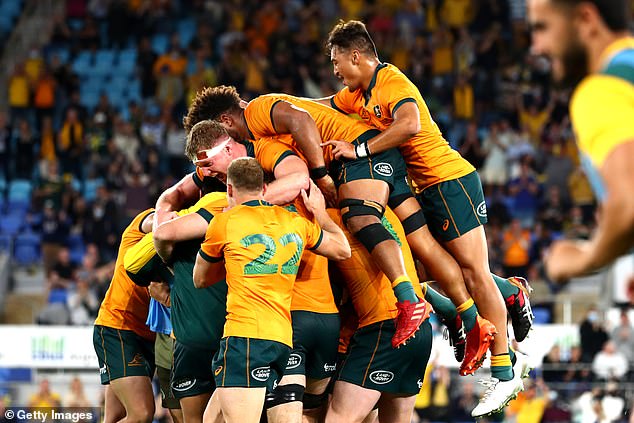 ‘We’ve just got to look to build that cohesion straight away. We’ve had two weeks’ training and just one game with this group of players but they seem to have bonded well.

‘They’ve trained with energy and communication has been high so those are usually positive signs that we’ll get off to a positive start on Sunday.’

Townsend has made six changes to the side that started the 10-try victory over Tonga, with Stuart Hogg, Duhan van der Merwe, Chris Harris, Finn Russell, Sam Skinner and Grant Gilchrist all added to the team. 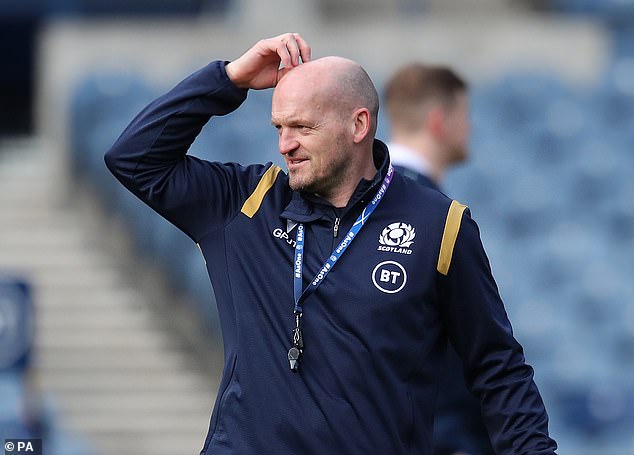 The head coach explained that he had several difficult decisions to make, including dropping Kyle Steyn to the substitutes’ bench after his record-breaking four-try haul last weekend.

He said: ‘Kyle was certainly in the mix for selection but I think getting on the bench ahead of other players like Huw Jones, who was on the bench during the Six Nations, shows that what he did last week has brought some rewards. 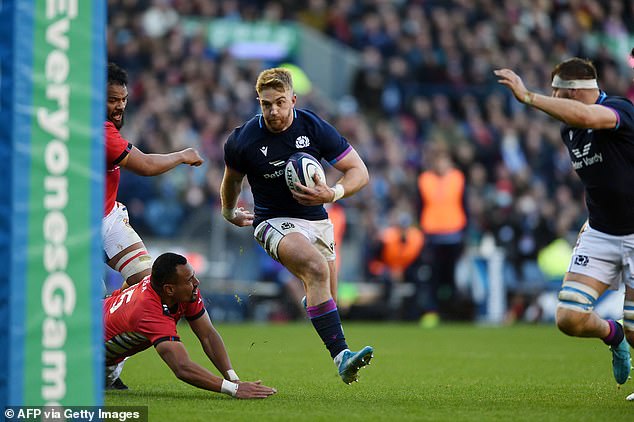 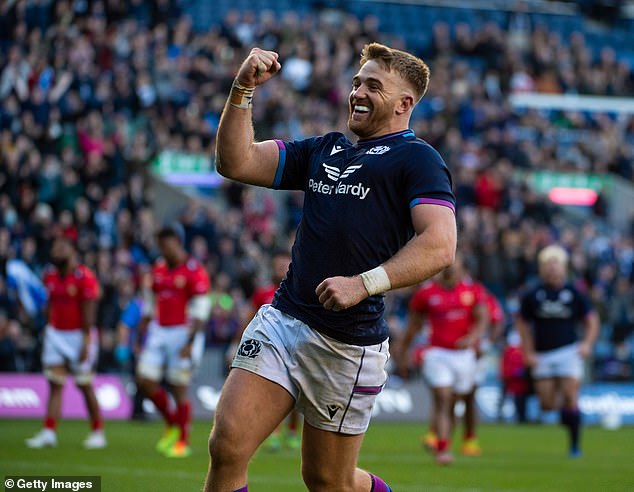 Steyn, however, will find himself on the substitutes’ bench when Scotland host Australia

‘All selections are tough. You give each selection the due time to make sure you look at each individual and debate each position.

‘In this side, we picked 14 of the 15 players who started against France and it’s likely it would have been 15 out of 15 if Rory had been fit and available.

‘You could look at it and say there wasn’t much debate because the team hasn’t changed much but we know that’s not the case. Since that game in Paris, players have had different experiences.

‘Last weekend, players played very well but we’re backing this group of players. They did a lot of good things in the Six Nations and since then a few of them have gone on to have more experiences that should make them even more rounded players and more confident Test players.’