EXPRESS INFORMER > Travel > Green list travel: Barbados is back… and it’s better than ever!

Oh, the waiting and the false hopes have been cruel, like low-grade torture. But with the Green List extended to the Caribbean, we can enjoy the shock of the exotic once more in Barbados – evening warmth with a wash of waves, the outrageous colours of the sea and beautiful bougainvillea, and the tastes of the tropics in tree-ripened mango, nutmeg and rum that zings with lime.

But how different is Barbados now from what we remember? Will there be the same gracious Bajan welcome and the familiar verve to the west coast?

The island has been proactive in its vaccination programme and has tracked Britain’s stuttering release, adapting its entry protocols so now you just need a negative Covid test before boarding your flight, and another on arrival.

With the Green List extended to the Caribbean, we can enjoy the shock of the exotic once more in Barbados (pictured)

You’re then confined to your hotel until you get a negative result – usually by that evening – but that is no hardship as the urgency of the outside world evaporates and you’re cocooned in a serene green enclave filled with colourful tropical blooms.

The west coast stalwart resorts are all open, having ticked over with a few staycationers, and have readied themselves in the hope of a flood of summer visitors. There is a bit of temperature-taking in public-facing services, and some activities must be booked, but otherwise it feels normal.

Coral Reef is looking particularly good, tranquil in its beautifully trained gardens. Similarly The Sandpiper, whose profusion of greenery screens any activity at the beach, and Cobblers Cove, where ‘rooms’ of foliage provide nooks to recline in.

Sandy Lane is, of course, immaculate. It reached its 60th anniversary earlier this year. There were no celebrations (that’s being saved for next year), but until mid-October it is offering a special Return To Paradise package with added dinners, spa treatments and golf.

Barbados has always been easy and fun to explore, and nothing prevents you from getting out there again.

The pandemic has hit businesses hard, but equally there is plenty of building work going on along the coastal roads. There is also increased interest in the Atlantic side of the island, so the Round House now has some competition despite sharpening up its menu (though still offering an excellent breadfruit soup with breadfruit chips). 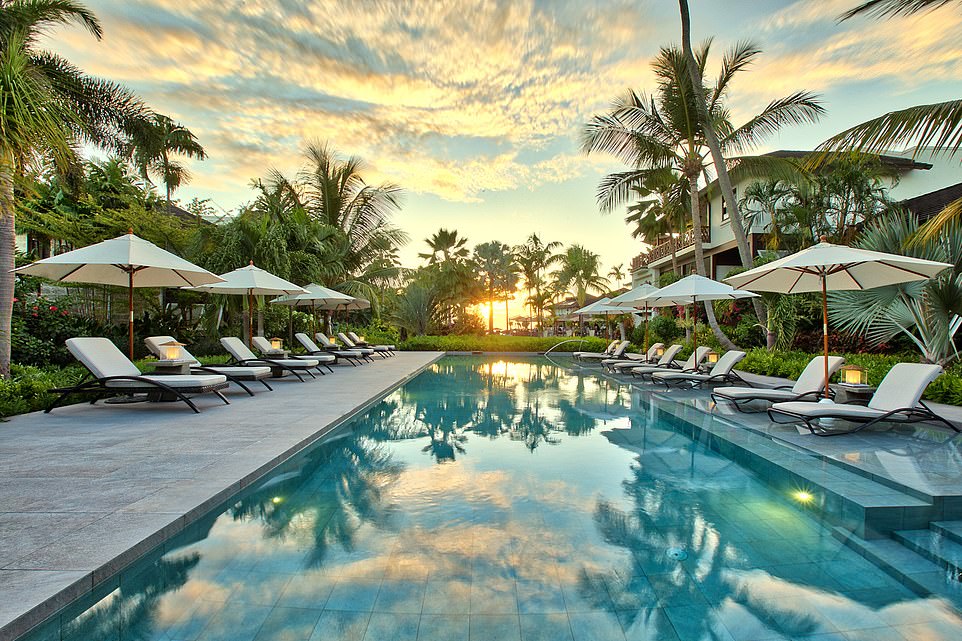 Sunloungers at The Sandpiper resort, which has a profusion of greenery that screens any activity at the beach

Eco-Lodge, above Bathsheba, has an easy, laidback vibe, serving farm-to-table and sea-to-table dishes on a deck that’s among the palms 100ft above the coast.

A more local stop is Dina’s, a lilac and fuchsia shack right above the Atlantic rollers, where you are greeted by the lady herself – ‘Dina?’ ‘Yes, Dina, and who could be finer?’ She presides in the kitchen, offering local fish, chicken, salad and macaroni pie. My tip – ask if she’s roasting breadfruit.

It’s not just the hotels in Barbados that have superb gardens. Every home you pass has some crotons with a flowering bush or a fruit tree and some spices. 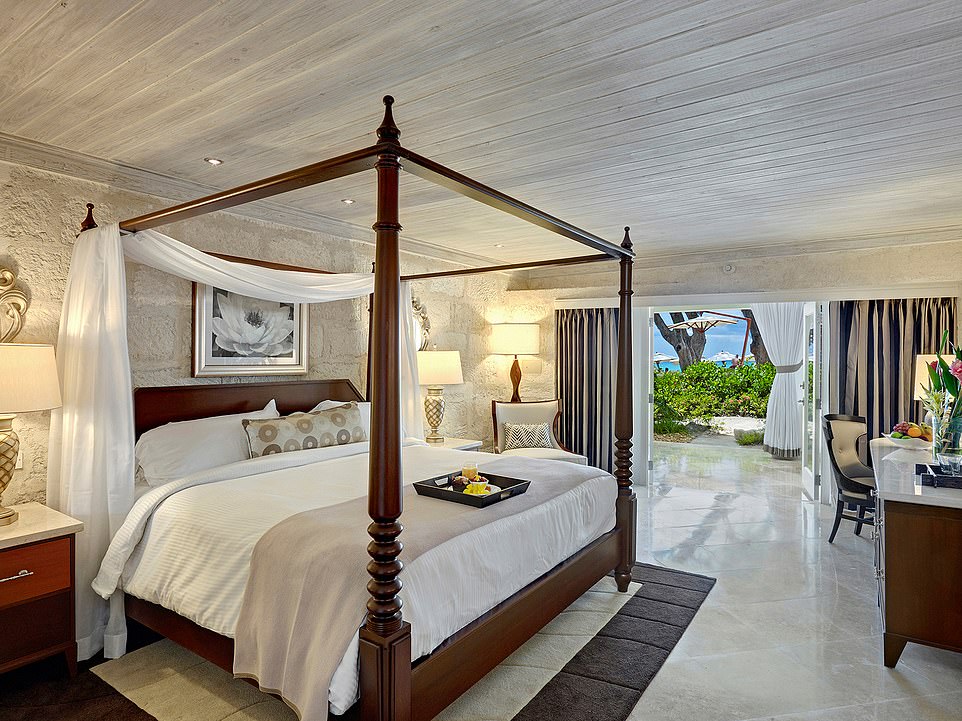 Dreamy: A bedroom at the Colony Club, where Caribbean rum is a speciality

Andromeda Gardens has an extraordinary collection of tropical and Barbadian plants originally amassed in the 1960s and 1970s. It is open, although you must book ahead. Hunte’s Gardens, set in a limestone sinkhole, is a far more flamboyant affair and lots of fun. You descend via spiral stairways into a cauldron of colour and blooms – the outrageous pinks, purples and scarlets of ixora, orchids and lobster claw lean in on you. Gentle classical music is piped and everywhere there are nooks and corners to sit quietly, often in the company of statues.

In the east, a noisier, frenetic experience is on offer for motor-racing fans at the Bushy Park Circuit. The islanders are in ferment over their star driver, 17-year-old Zane Maloney, winner of Formula 4 in 2019 and currently riding high in the Formula Regional European Championship.

You can book a ride around the track on which he honed his skills as a passenger in a Formula 4 racing car, a Radical FR3. 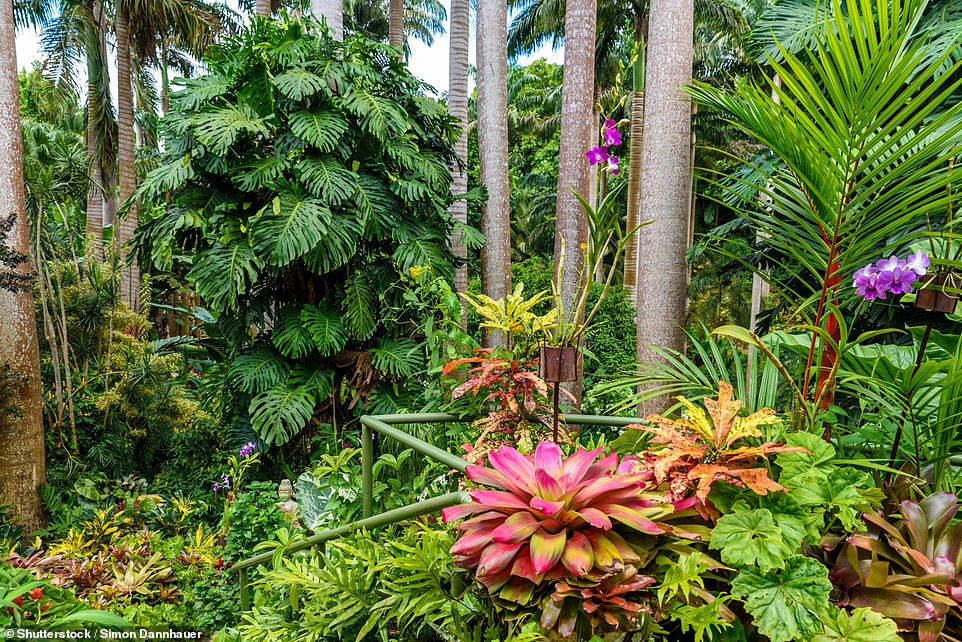 Hunte’s Gardens (pictured), set in a limestone sinkhole, is a flamboyant affair and lots of fun

While gin conquers the world, the Bajans are putting in a claim as the original home of rum. Recently, Mount Gay, in the north, where they have been making rum continuously since 1703 (although there are also claims it dates back to 1654), has opened a full distillery tour. You begin at the estate house for the story of how rum developed on the island, then set off to see the essential water well, molasses house, fermentation area and pot stills used for distillation, and finally the ageing houses each stacked to the roof with wooden barrels and fragrant with the ‘angels’ share’ of evaporating alcohol.

The story continues back at the Colony Club, our hotel on the west coast, with a Storied Rum Dinner in the rum vault. A feast of three courses and cocktails features glazed pork belly with a spiced sorrel rum sour, while coconut-crusted red snapper in lemongrass is paired with Mount Gay Silver rum laced with lime and a fennel and ginger syrup. It is accompanied by an entertaining tale of rum through the centuries by ‘Rum Ambassador’ Corey Sobers.

We finish with a flight of three rum digestifs and associated chocolates – and a slightly wobbly walk back to the room. 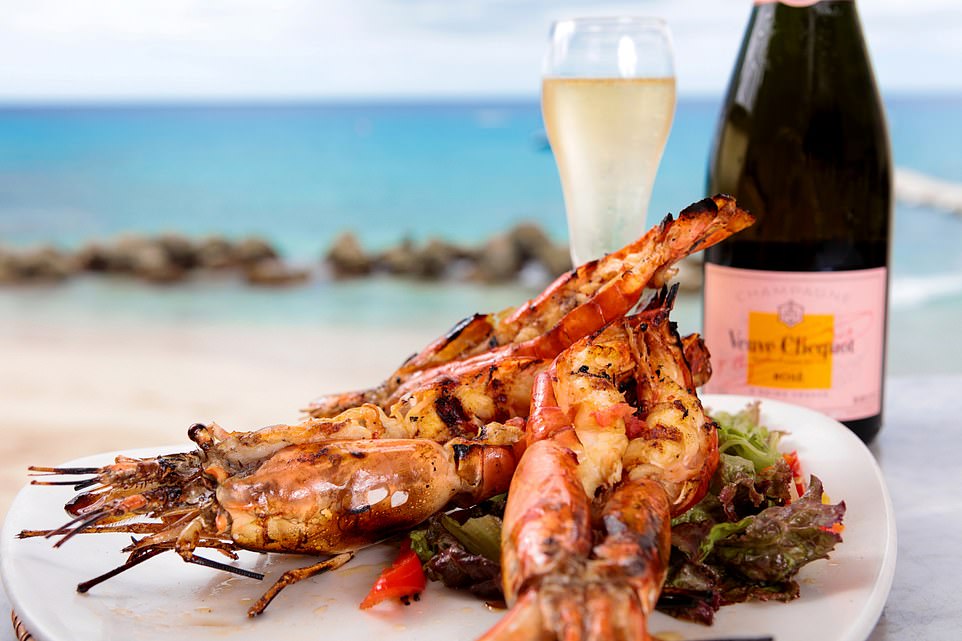 Sparkling fare: Champagne and prawns at The Fish Pot in Hastings

James Henderson was a guest of Elegant Hotels Barbados, owned by Marriott International (marriott.com), staying at two of its west coast properties – the traditional Colony Club (B&B from £215 per room per night) and boutique The House (from £403 per room per night all-inclusive), based on two people sharing a room. He flew with Virgin Atlantic (virginatlantic.com), which offers return fares from Heathrow to Barbados from £490. For more information about Barbados, see visitbarbados.org.

The restaurants of Barbados come with a strong reputation. Not everywhere is open, and change is afoot, though as always in the Caribbean, owners change too radically at their peril. Returning regulars want things tweaked but to remain dependably the same.

At the Lone Star, the view on arrival and from the deck, with its white and blue tablecloths and chairbacks, is still fabulous. A new chef has arrived: Minesh Patel (who trained under Gordon Ramsay and Angela Hartnett) will retain the metropolitan menu and its Caribbean ingredients through the summer, but begin also to branch out, peppering dishes with exotic touches from North Africa, Korea, Persia and beyond.

The Cliff is under new ownership and is undergoing ground-up reconstruction while Guy Beasley remains at the helm of The Tides in Holetown, which is still offering its popular take on the Bajan tradition of Sunday lunch, Rhythm And Roast, with entertainment accompanying your meal.

Holetown itself is less a centre of culinary gravity nowadays, though locals frequent (always a good sign) Fusion Rooftop in Limegrove shopping centre for its international fare.

There are plenty of restaurants scattered along the coast.

There is a burgeoning farm-to-table scene. PEG Farm, whose excellent meats are used around the island, offers superb burgers on an inland deck with a vast view. There are also farmers’ markets in Brighton and at Art Splash, a cafe and gallery in Hastings on the south coast.

The south has also sprouted beach bars in classic Caribbean style – shacks that resonate to the thump of reggae and the chatter of islanders and tourists alike. Check out Blakey’s On The Boardwalk or Chill Cafe Bar & Grill in Hastings, for a Carib beer or a Banks (or try the lighter 10 Saints lager).

And back on the west coast, there’s trusty Ju-Ju’s, in a shed painted in the Bajan colours of blue and yellow.

A recent innovation is Barbados’s elegant beach bars, made for lingering all day and evening. Sea Shed, a sand-coloured bar with tiered decks above lovely Mullins Bay, is always lively: swim, drink, eat, repeat. The menu is varied, from pizzas to a daily catch and wagyu burgers, with a DJ on Friday and Sunday afternoons and live jazz on Saturdays.

And La Cabane is a French-inspired, free- form scattering of cable barrels and safari chairs under the bushy trees of Batts Rock Beach near Bridgetown.

Arrive for lunch and Minuty rosé and don’t be surprised if you’re still there at sunset, sampling their rum punch as the sun slides over the horizon.