Environmental activists are calling on a new tunnel under the River Thames to be scrapped despite construction already being underway on the £2billion project – dubbing it London Mayor Sadiq Khan’s ‘dirty little secret’.

The Silvertown Tunnel in South East London is expected to open in 2025 having got the green light from the Government three years ago – but it has faced major criticism from local residents and green campaigners.

Transport for London first proposed the tunnel in 2005 to help ease the burden on the Blackwall Tunnel, through which up to 100,000 vehicles pass a day, and it was backed by Boris Johnson when he became mayor in 2008.

His successor Sadiq Khan has also been behind the plans for the four-lane tunnel running for 0.9 miles, which is expected to link North Greenwich with Royal Docks north of the river – and see motorists face a toll.

But the Liberal Democrats have been among those calling for the project to be scrapped, calling it Mr Khan’s ‘dirty little secret’ because it is not mentioned in Labour’s manifesto for re-election in the mayoral election on May 6. 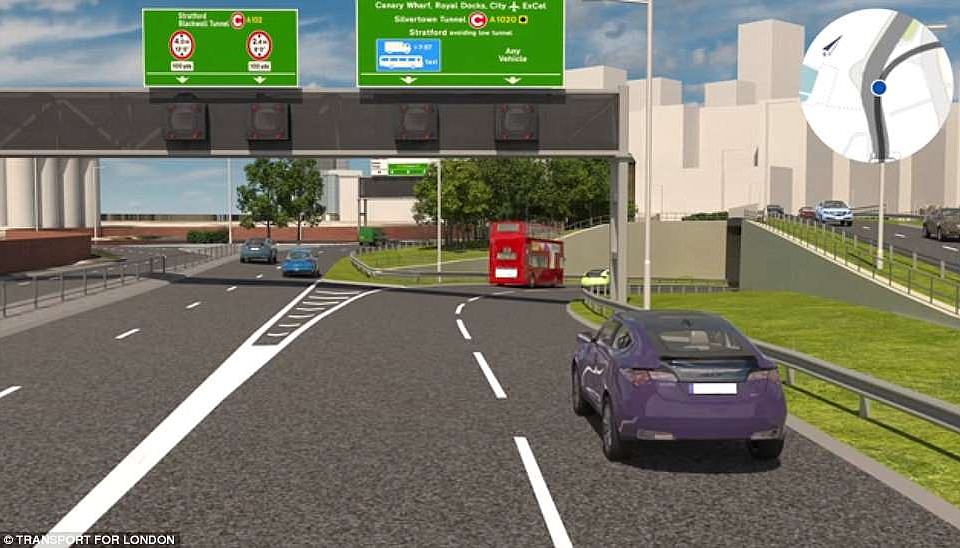 The entrance to the tunnel will be on the right of this artist’s impression, with cars on the left going to the Blackwall Tunnel 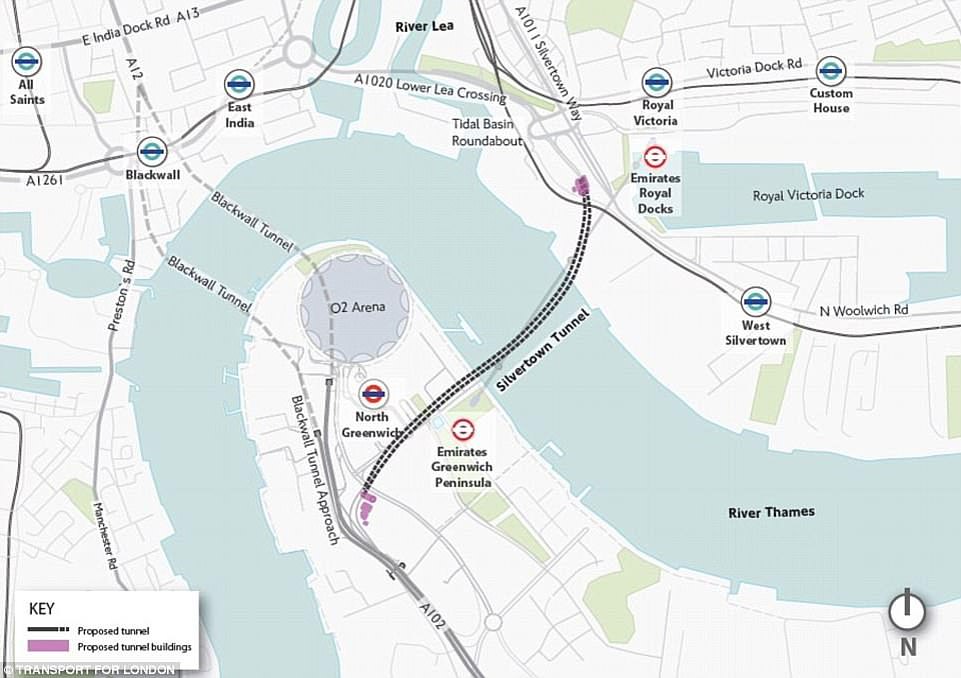 This map shows the proposed tunnel with the dotted line, which will link the Greenwich Peninsula with the Royal Docks

The tunnel, which had initially been due to open in 2023, is expected to cost £1billion to build – half of the total of £2billion in the next 30 years on construction, maintenance and operation as well as interest payments on debt.

Opponents claim the project goes against Mr Khan’s target to make London a net zero-carbon city by 2030, saying it will result in more traffic – with some instead calling for pay-as-you-go road pricing across the capital.

Liberal Democrat politician Hina Bokhari, a London Assembly election candidate and councillor in Merton, told a hustings event for SWLondoner and Riverside Radio on Tuesday: ‘Scrapping the £2billion polluting Silvertown road tunnel is exactly what we need to do, because with those savings we can make sure we can go into greener transport options instead.

‘Now, Luisa Porritt, our mayoral candidate, is calling the Silvertown road tunnel a ‘dirty little secret’ because it’s nowhere in the Labour manifesto, it’s not mentioned at all, and we need to make sure that everyone knows that this is happening. It’s incredibly wrong to put in an extra road and then say you’re wanting to have less cars on the street, it doesn’t make any sense.

‘We want to have fairer single London-wide pay as you go road pricing, so that we’re charging cars based on emission levels, the distance that’s travelled and the congestion levels. We want to make sure that we have a road charging system that’s fit for the future.’

The ‘dirty little secret’ quote was given by Ms Porritt in an interview with the Evening Standard on April 21, in which she said of Mr Khan and the tunnel: ‘I call it his ‘dirty little secret’ because the mayor is trying to hide the fact that he is still backing this project even though there is no justification for it from an environmental perspective, or a financial one for TfL.

‘When these public transport schemes that we desperately need are being put on hold, there is no justification for spending £2billion on another road, when our priority is supposed to become a net zero-carbon city by 2030. That is his own target. How is he going to achieve it by building this road at the same time?’

Last week a group of experts called on Mr Khan to scrap the tunnel, saying that it would make it tougher for Britain to meet its climate goals because it would encourage more people to drive and therefore increase traffic. 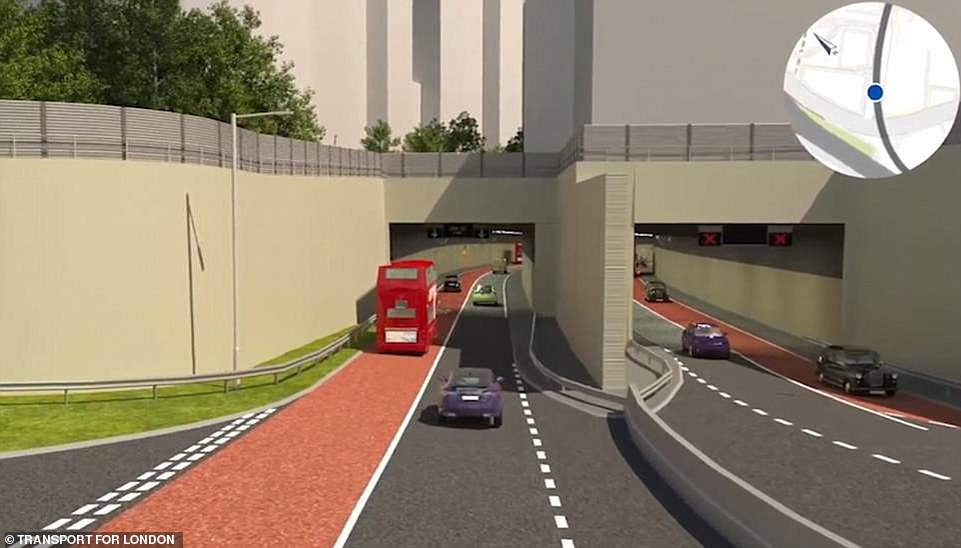 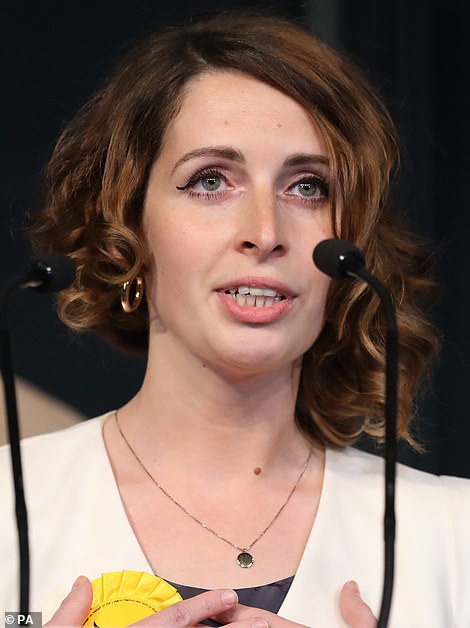 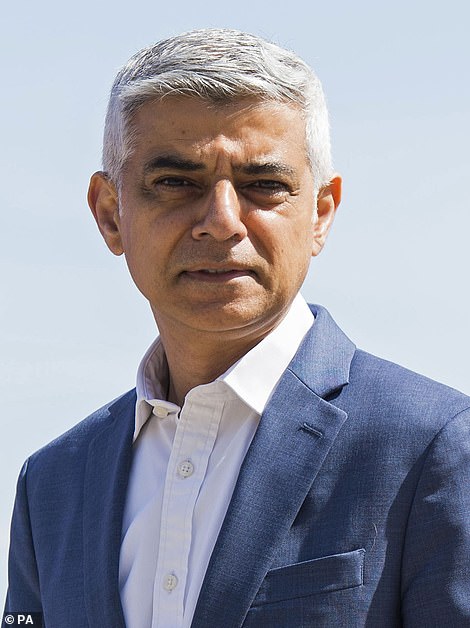 Dozens of academics wrote an open letter to Mr Khan and Transport Secretary Grant Shapps, seen by The Independent, in which they said it would be ‘foolhardy to press ahead with an infrastructure project that can only contribute to the UK’s excessive greenhouse gas emissions’.

£1.55 for Hammermsith Bridge ferry service while repairs are carried

Uber will operate a replacement ferry service while Hammersmith Bridge in West London is repaired.

The private hire firm was last month handed the contract to take pedestrians and cyclists across the River Thames at a proposed charge of £1.55.

Transport for London said Uber Boat by Thames Clipper hopes to run crossings from 6am to 10pm and transport 800 passengers per hour on its catamaran. 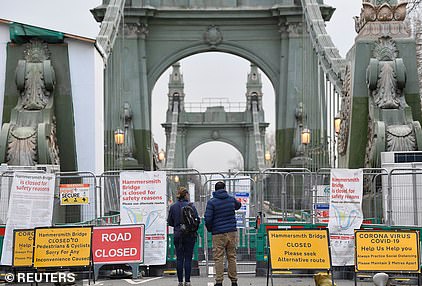 But the boat service will not start until the end of this summer, likely dismaying exasperated locals who have been without a nearby crossing for almost two years.

Since the 134-year-old bridge was closed in summer 2019, after cracks first appeared in its pedestals, the repairs have been the subject of wrangling between the council, TfL and the Department for Transport.

TfL said that the replacement ferry service £1.55 cost is in line with bus fares and would also include a Hopper option to change transport mode for free.

They added that the project would have the effect of ‘skewing London’s transport system further towards roads, and exacerbating local air pollution problems’.

Mr Khan’s office was contacted for comment by MailOnline this morning. TfL directed comment requests to the Mayor.

Responding to the article in the Independent last week, a spokesman for Mr Khan told the newspaper: ‘The Silvertown Tunnel is the only alternative to help reduce the poor air quality and massive congestion caused in the area by the Blackwall Tunnel.

‘It won’t cost taxpayers money but will use the proceeds of a user charge in both the Blackwall Tunnel and the Silvertown Tunnel to pay for a reserved lane for buses.’

The Department for Transport approved the tunnel in May 2018 after months of arguments over pollution, with permission delayed since October 2017 because of calls for an air quality impact assessment to be carried out.

The No to Silvertown Tunnel campaign group, which has since been wound up, said at the time that the approval suggested ‘London is closed to new thinking on how to deal with congestion’.

But Mr Khan said at the time that he was ‘delighted’ with the approval, adding that the tunnel was ‘vital for the future prosperity of East London’ and that he would try to ensure it ‘doesn’t have a detrimental impact on our environment’.

The twin-tunnel crossing is expected to follow a similar path to the Emirates Air Line cable car, by connecting to the A1020 Silvertown Way/Lower Lea Crossing and the A102 Blackwall Tunnel Approach.

Transport officials said users of the tunnel would be charged different toll fees based on the time of travel to manage demand and help ‘ease the current serious congestion’.

Toll charges will also apply for using the Blackwall Tunnel, which is currently free to cross – something which has been ‘vehemently opposed’ by the Federation of Small Businesses because of the impact it will have on smaller companies.

In August last year, Extinction Rebellion activists dressed up as banshees to protest the construction of the Silvertown Tunnel, with the organisation saying that it believes it is ‘racist, colonial and unjust’.

Eco-warriors rallied outside the TfL offices in Stratford, East London, in a show of anger at the road, saying it would cause pollution in Newham that will hit the BAME community the hardest. 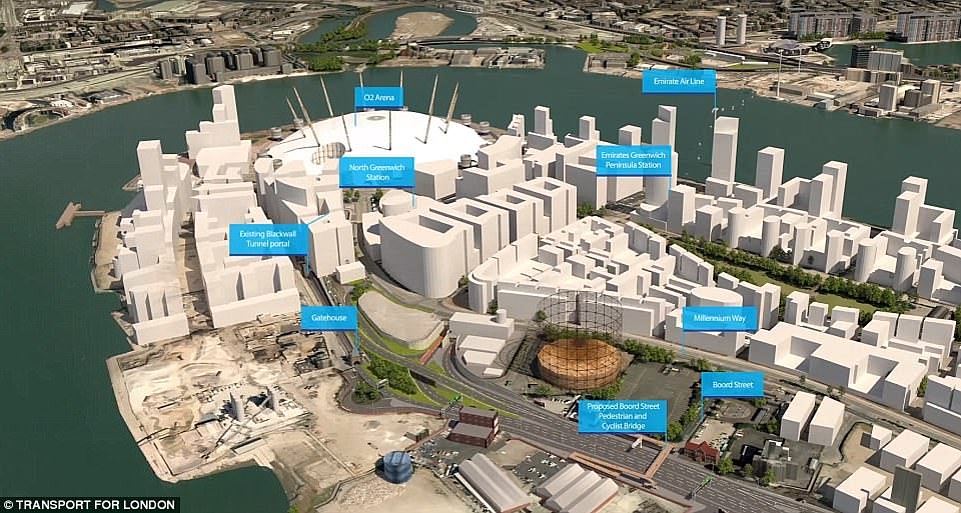 The proposed entrance to the Silvertown Tunnel can be seen in the centre of this graphic, to the right of the gatehouse 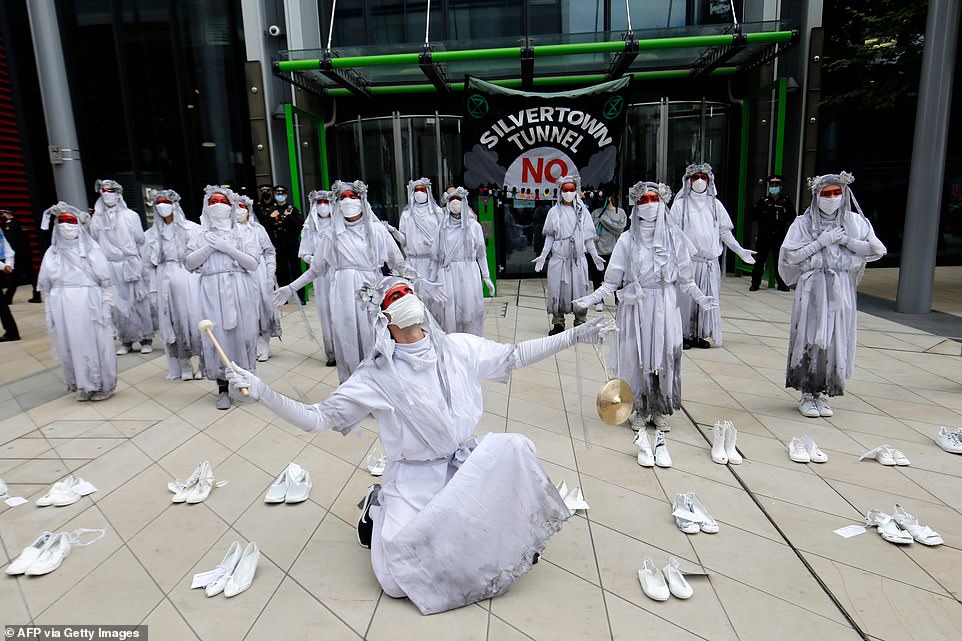 Banshees also paraded through Woolwich, a few miles away, where they lay sprawled on the ground.

Silvertown is one of London’s biggest regeneration areas, and in April 2018, Indian billionaire Subhash Chandra revealed plans to build a £1billion ‘peace theme park’ on the 62-acre site where a derelict building now stands.

He hopes to build a site featuring museums and a theatre, retail outlets, restaurants, a botanical garden and a luxury hotel on the historic area of the capital’s Royal Docks where BBC crime drama Ashes to Ashes was filmed.

The centrepiece would be a cultural centre that would sit on 14 acres and span 2.5million square feet at the heart of the project, with Indian conglomerate Essel Group claiming it could create 5,000 jobs in the East End.

A huge regeneration is taking place in Silvertown, which is a largely forgotten part of the West Ham area of Newham and an industrial wasteland which has fallen into dereliction.

The ambitious plans for the 62-acre site centre around the restoration of the 1930s Millennium Mills, once home to food manufacturer Rank Hovis MacDougall. The building has not been used since the early 1980s.

The plans also include a bridge across Royal Victoria Dock to connect Silvertown Quays with the Crossrail station at Custom House, and a new Roundhouse East that will be a music venue and education space. 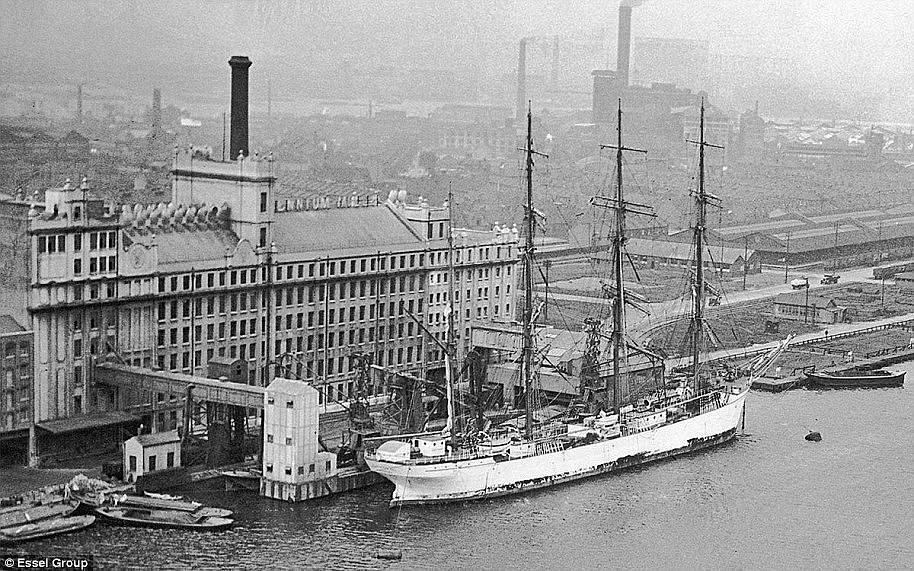 The 1930s Millennium Mills building in Silvertown, which could soon be transformed into a cultural centre, is pictured in its heyday 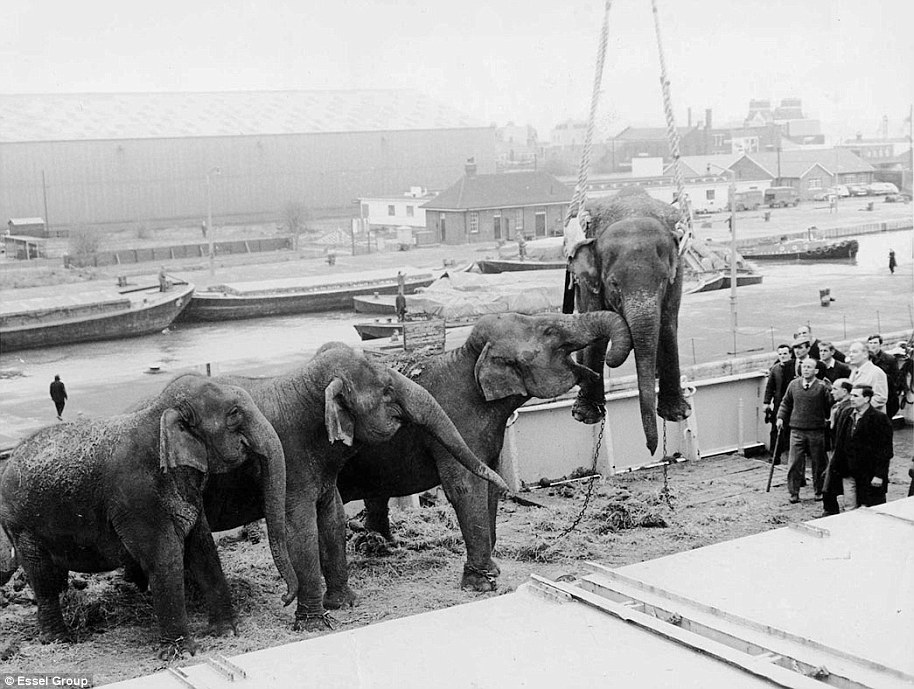 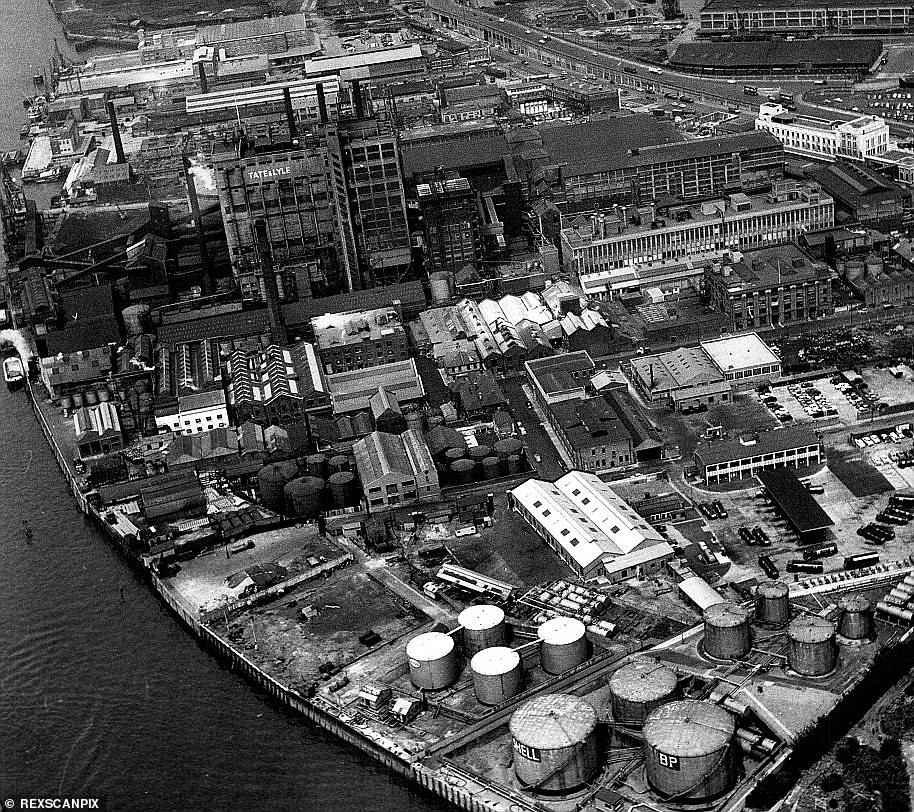 An aerial view of the BP oil refinery at Silvertown in 1961. The area is now a largely forgotten part of the West Ham area of Newham 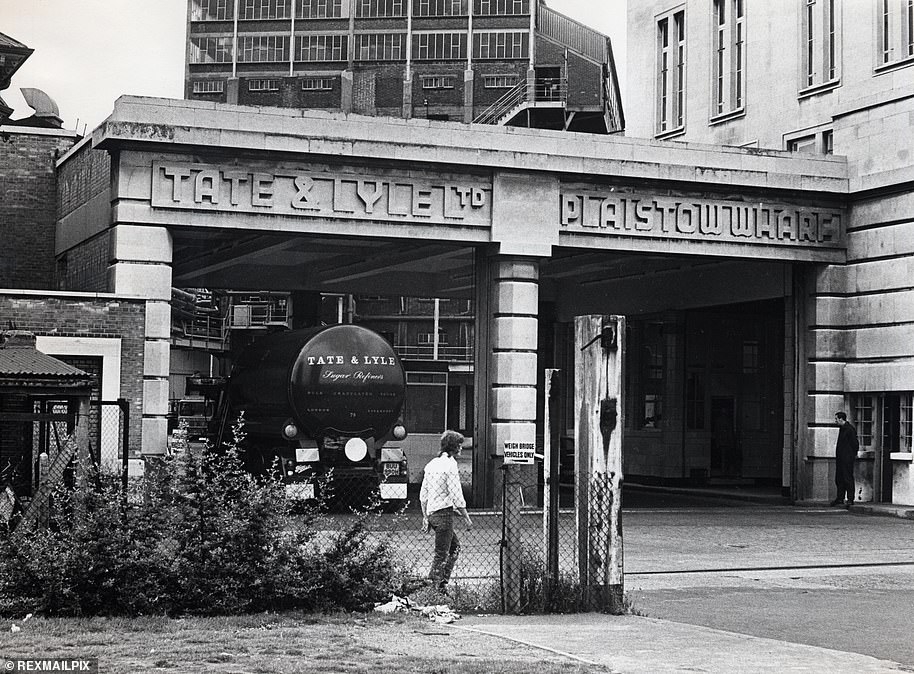 Silvertown was home to companies including James Keiller & Sons, makers of marmalade, and the sugar refiners Tate & Lyle (pictured)

Transport for London is also now digging a new road tunnel beneath the Thames from Silvertown to the Greenwich Peninsula, in an effort to ease the burden on the Blackwall Tunnel, through which 100,000 vehicles pass a day.

The Silver Building in Silvertown, which opened in October 2018, is intended to be the home of start-ups, local businesses and artists. Originally built in 1965 for British Oil and Cake Mills, the site was left derelict for more than 20 years.

Silvertown, which lies close to London City Airport, was once a booming industrial centre in the 19th and early 20th century, home to companies including James Keiller & Sons, makers of marmalade, and the sugar refiners Tate & Lyle.

However it was devastated by an explosion at the Brunner Mond factory, which was being used to purify TNT during the First World War. It killed 73 people, injured more than 400 and destroyed 900 homes.

Then in the Second World War Silvertown and the Royal Docks suffered major damage from German shelling. Thereafter much of the area fell into dereliction, including local shops and pubs. 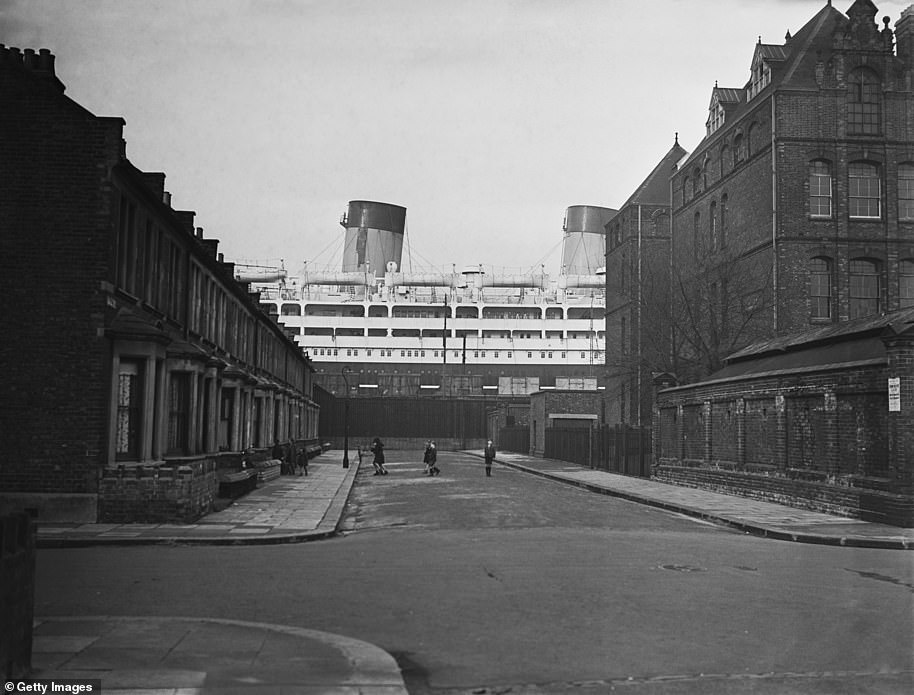 The 26,263-ton Shaw Savill liner Dominion Monarch dwarfs the surrounding houses from her dry dock at Silvertown in 1950 The Tate & Lyle sugar refinery can be seen from above in 1974. Much of the area fell into dereliction following the Second World War 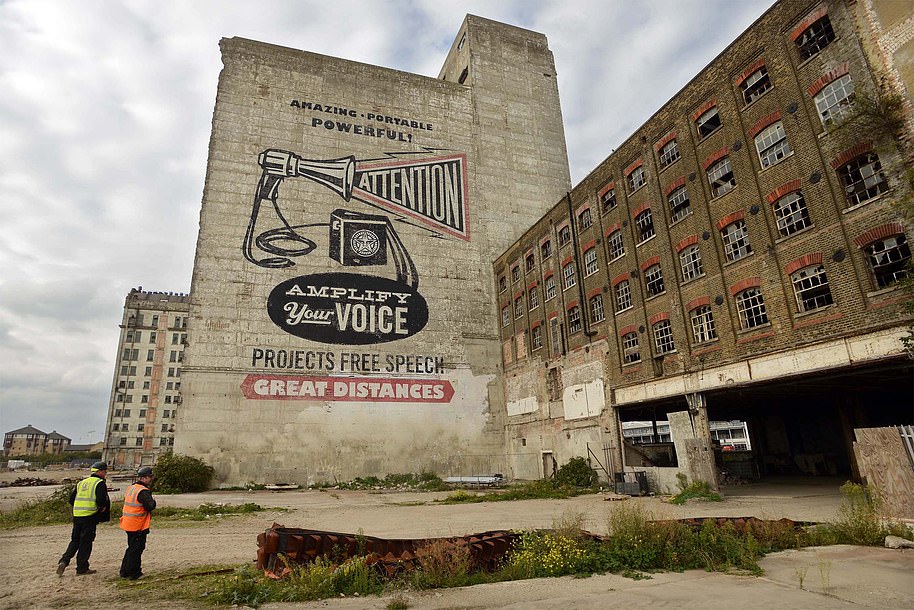