Countries across Europe are introducing new restrictions in a bid to curb the spread of coronavirus amid rising infections.

This week, Greece went into lockdown while Paris – already in lockdown – introduced a curfew on food deliveries.

Elsewhere, Italy brought in new restrictions on daily lives which seem to have had little effect on the filming of Tom Cruise’s latest Mission Impossible instalment in Venice.

Greece’s three-week lockdown came into effect on Saturday at 6am after Prime Minister Kyriakos Mitsotakis said he was forced to act after a spike in cases over the past five days, saying that without a second lockdown pressure on the country’s healthcare system would be ‘unbearable’.

Under the new restrictions retail businesses will close, with the exception of supermarkets and pharmacies, and high schools will shut while primary schools will remain open.

Greeks will be required to obtain a permit in order to leave home and must carry it and their ID with them when they do so. 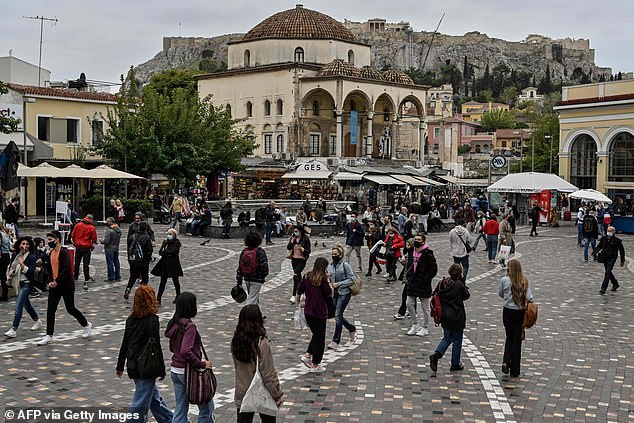 The permit can be obtained by text after providing a name and address and choosing the reason for leaving home from a list.

If sending a text is not possible, Greeks can simply write their reason for leaving home on a piece of paper and carry it with them, according to Greek Reporter.

‘I’ve chosen to take drastic measures sooner rather than later,’ Mitsotakis said on Thursday when announcing the lockdown.

He had previously said that a second nationwide lockdown would be imposed as a last resort.

However, officials said that in the past week alone there had been a 20% increase in confirmed coronavirus cases. 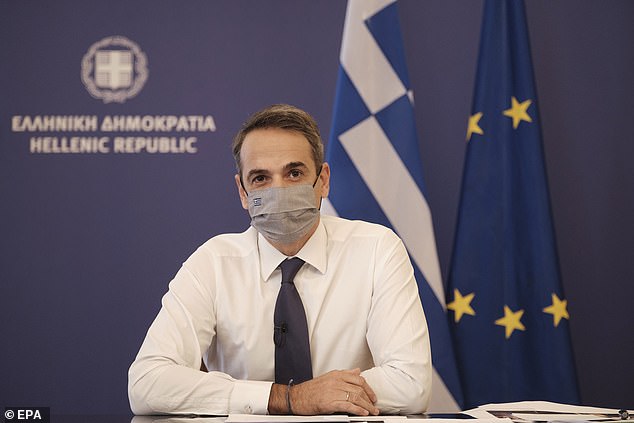 Prime Minister Kyriakos Mitsotakis said he was forced to act after a spike in cases over the past five days, saying that without a second lockdown pressure on the country’s healthcare system would be ‘unbearable’

A day earlier, it had reported 2,646 new cases, with infections hitting four-digits only in the past eight days.

There have been 702 recorded deaths from Covid-19 in Greece, which managed to weather the first wave of infections without the enormous loss of life seen in other European countries.

Thursday’s announcement prompted a scramble by many to book hairdresser and barber appointments before the measures took effect.

‘It’s been absolutely crazy, we haven’t stopped to catch our breath,’ a barber in central Athens told Reuters news agency.

Authorities later announced that hairdressers would be allowed to work two extra days until Monday to meet demand.

From Monday, people arriving to the country by air will require proof of a negative coronavirus test, taken within 48 hours of travel to enter.

Greece’s government has been criticised for failing to bolster the country’s healthcare system ahead of an expected second wave of infections this winter.

Alexis Haritsis, an MP for the main opposition Syriza party, who previously served as interior and deputy finance minister, said the government had ‘undermined the magnitude of this crisis.’

Greece, which lost a quarter of its national output during a decades-long financial crisis, expects to see its economy shrink by 8.2% this year. 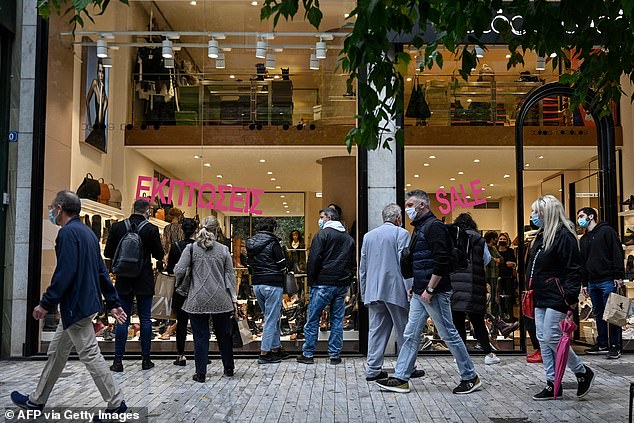 Pictured: A busy Athens high street on Friday with shops offering sales before they will close for three weeks as part of a national lockdown

On Friday, Paris introduced a ban on delivery and takeaway services between 10pm and 6am local time after France hit a record number of 24-hour infections on Thursday with 58,046 new cases reported.

The sale and consumption of alcoholic drinks in public spaces at night has also been banned.

Currently, non-essential businesses are closed and citizens require a signed document to justify being on the streets.

While closed restaurants have been allowed to offer delivery and takeaway services, Paris authorities said that customers and couriers are congregating at nighttime as a result and not following limits on social interactions. 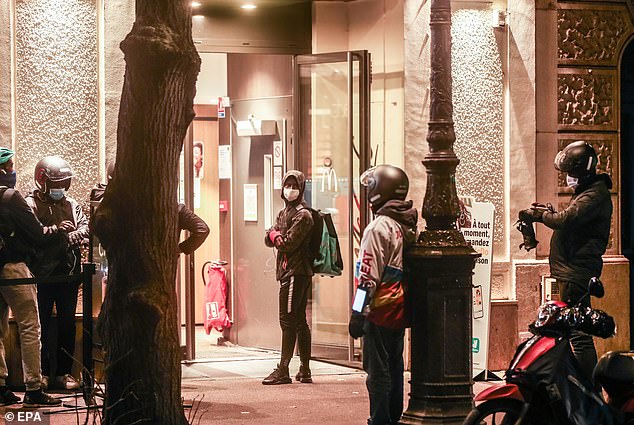 Paris has introduced a ban on delivery and takeaway services between 10pm and 6am after infections in France hit a grim new record on Thursday. Pictured: Couriers wait outside a Paris McDonald’s restaurant 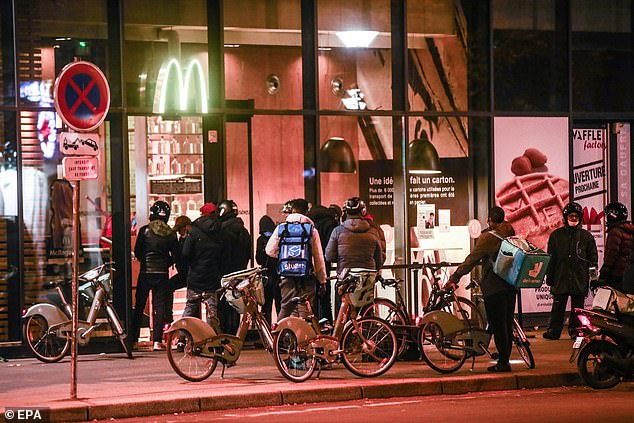 While closed restaurants have been allowed to offer delivery and takeaway services, Paris authorities said that customers and couriers are congregating at nighttime as a result and not following limits on social interactions. Pictured: Couriers wait outside a McDonald’s restaurant in Paris 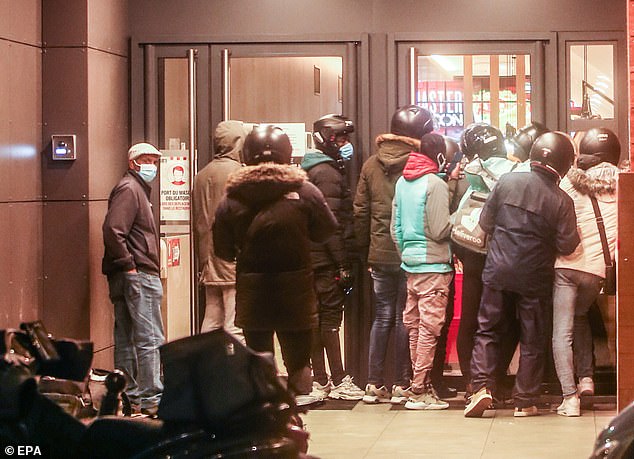 Couriers crowd the door of a KFC restaurant in Paris. New restrictions on ordering takeaway and deliveries have been introduced amid a rise in cases

‘When you get people who are not playing by the rules of the game, and are therefore putting at risk the health of a large number of people, that is when you need to put in place new restrictions,’ Paris Mayor Anne Hidalgo said on BFM TV prior to the restrictions being announced.

A French government source said this week that they had noted in Paris ‘clandestine parties, raves, private dinners’ and felt stricter measures were needed. 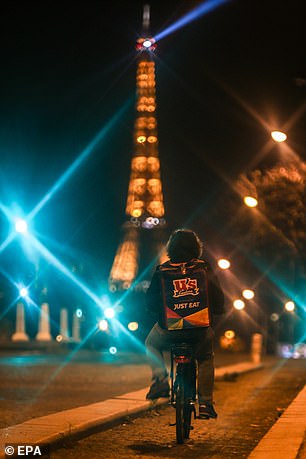 Pictured: A courier cycles past the Eiffel tower in the French capital, Paris

Despite the restrictions currently in place, France is still registering more than 40,000 new virus cases each day, placing massive strain on intensive care units around the country.

France’s health minister warned that if the virus continues spreading at the current rate, the second wave will be more severe than the first this spring.

The Thursday record of 58,046 new daily cases was almost 6,000 higher than the previous one, set on Monday, and a further 363 deaths were registered on Thursday, taking the country’s total death toll from the coronavirus to 39,037.

With a total of more than 1.6million confirmed COVID-19 cases, France has the fifth-highest tally in the world.

The Paris region health authority said in a statement that 92% of the region’s ICU capacity is now occupied, with nearly 1,050 COVID-19 patients and 600 patients with other ailments.

Gilles Pialoux, head of infectious diseases at the Paris Tenon hospital, told Reuters that the only way to reduce the current infection rate in France was to limit the circulation of people.

‘We will probably have to forget about Christmas holidays in order to save 2021. This year, Christmas will be over Skype,’ he said.

Italy also introduced new measures on Friday though pavements of some cities were reportedly still dotted with coffee drinkers.

The restrictions divide the country into three zones according to the severity of the outbreak in local areas and are less severe than the blanket measures imposed during the first lockdown in March.

Italy reported more than 34,000 cases and 445 deaths on Thursday and has seen an alarming resurgence of the pandemic as other countries in Europe have, but Rome has been desperate not to shut down the economy entirely.

In Milan, the fashion and business capital where the strictest limits have been imposed, streets were quieter than normal but a far cry from the near-total silence of the spring.

Clothes shops, including the city’s luxury boutiques, were closed but many schools, offices and businesses including retailers of food and a broad range of staples remained open.

In the city centre, clusters of office workers or parents taking their children to school could be seen sipping their morning coffee from paper cups in front of cafes, despite rules against eating outside. 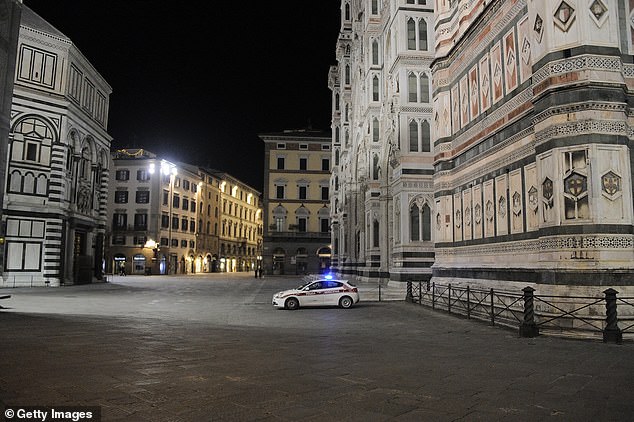 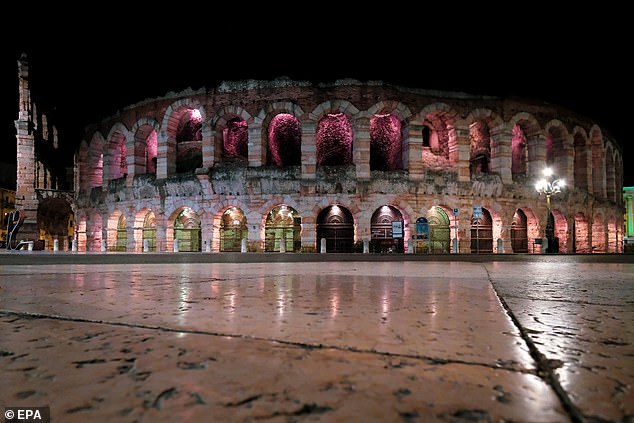 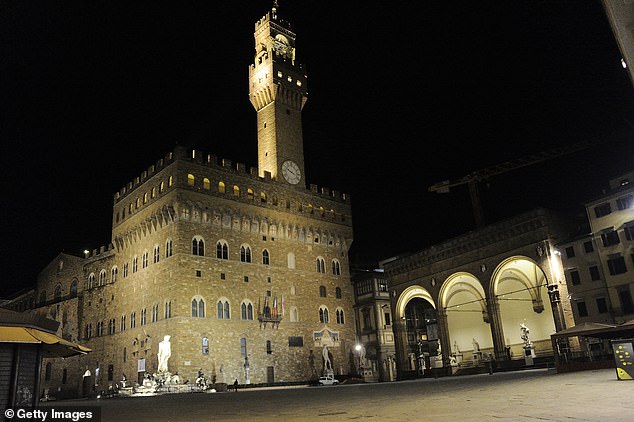 Italy’s new restrictions came as the country experienced a second wave of infections but the government in Rome remains determined to avoid a full lockdown in order to preserve the country’s economy. Pictured: An empty Signoria Square in Florence on Friday evening

‘I’m staying open at least to keep some people working.’

But disputes between local leaders and Prime Minister Giuseppe Conte’s government in Rome as well as general fatigue at the seemingly never-ending crisis have eroded the widespread public support seen in the first wave.

Businesses forced to close or wait months for promised financial support have been increasingly vocal in criticising the government.

‘We don’t have money to pay the monthly costs of our vehicles, we don’t have enough money to provide for our families,’ said Lupo, a taxi driver taking part in a protest outside the Finance Ministry in Rome.

The rules themselves – which for example allow hairdressers and barbers to work but force beauty salons to close – also appear to have left room for confusion.

Conte urged people to be patient and pull together. 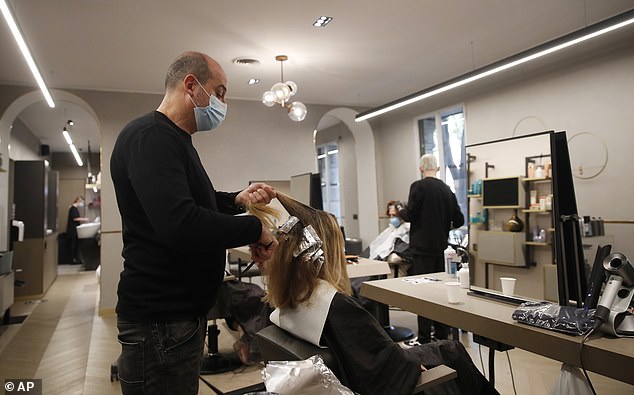 Some of the new restrictions appear to have caused confusion. Hairdressers, like the one pictured above in Milan, and barbers are allowed to remain open while beauty salons are not 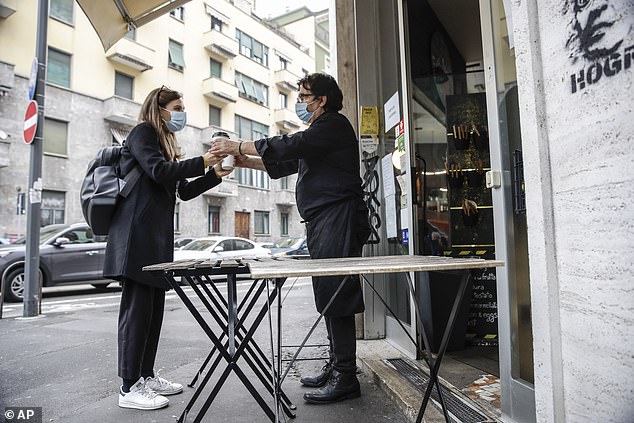 Unlike the harsh lockdown in March, restaurants are allowed to offer takeaway services. Pictured: A Milan cafe owner hands coffee to a customer

‘We hope these latest measures will only last a few weeks,’ the prime minister told an online food conference. ‘The virus is like a train on the move. Today we need to slow it down otherwise this train will hit us.’

While signs of lockdown fatigue have grown, there has been little sign of a return to normal any time soon.

‘I opened today because I know my clients still have to get organized for this lockdown and there are still people around,’ said Vicenzo Scialla, owner of a cafe near Milan’s Bocconi university.

‘But I am pretty sure most people will stay home from Monday. 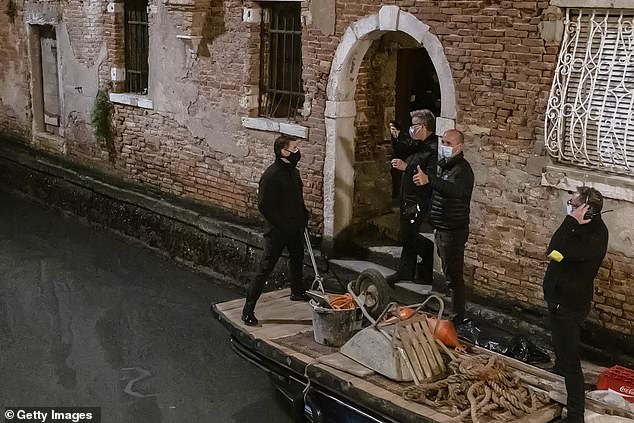 Despite the new measures, filming continued on the latest instalment of Tom Cruise’s Mission Impossible franchise. Pictured: Actor Tom Cruise (left) and others on the film’s Venice set 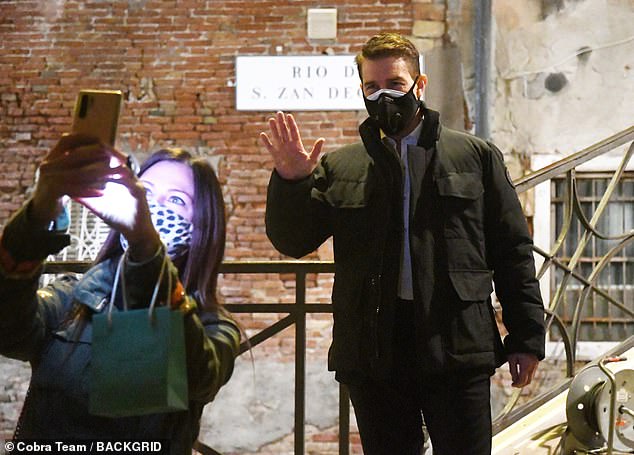 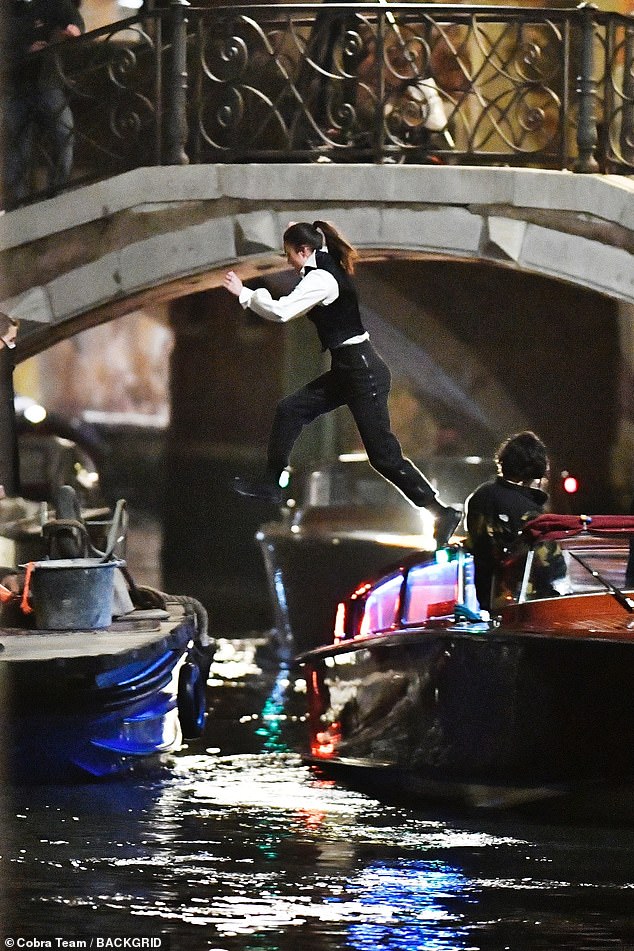 Swedish actress Rebecca Ferguson performs a stunt on the set of Mission Impossible 7, leaping between boats on one of Venice’s famous canals

Amid the new measures, filming continued on the latest instalment of Tom Cruise’s Mission Impossible franchise.

Health chiefs were said to be tracing the contacts of those who tested positive after filming was suspended, dashing hopes it was an isolated case.

It appeared to be yet another blow for the action movie franchise after filming was suspended earlier this year during the first European wave of coronavirus infections when cases rose sharply in Italy.

Cruise and McQuarrie, who worked together on previous Mission Impossible movies and Jack Reacher, were seen deep in conversation at their luxury base in the city, days after the situation came to light,

Filming has now been allowed to continue with production restarting on Monday. 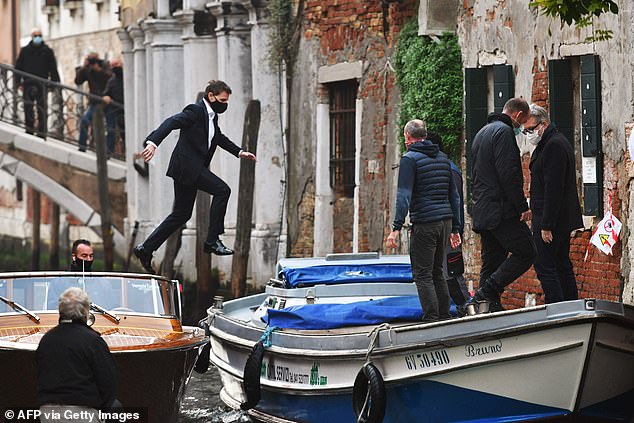 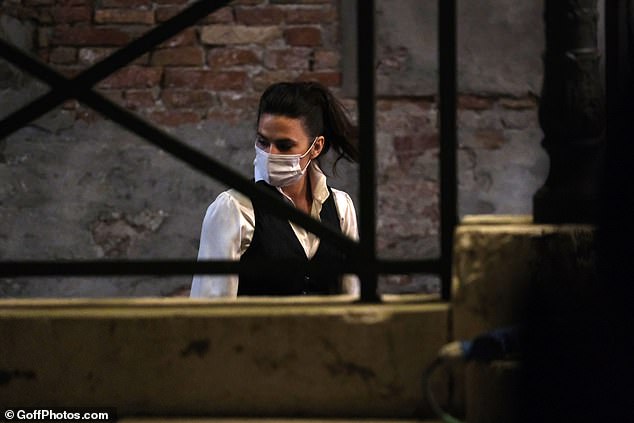