A heroic great-grandfather risked his life to save hdis neighbour from a burning house.

Gary Screaigh, 78, owner of a duplex in Lacelin, north of Perth, that went up in flames just before midnight on Saturday, was in bed next door with his wife when they suddenly ‘both jumped up’.

Mr Screaigh told 7News that he could hear his neighbour yelling for help and that’s when he decided to smash the window.

Gary Screaigh (pictured), 78, owner of the duplex in Lacelin that became engulfed just before midnight on Saturday, was in bed next door with his wife when they suddenly ‘both jumped up’

‘He would have been battling to find his way to get to the window,’ Mr Screaigh said.

‘It was when I could yell out to him and he’d come to me to get out and I got him out through the window.’

A woman, who was also inside the duplex, managed to escape.

Neighbours acted swiftly and reported hearing what sounded like ‘crackers banging’ and said the blaze ‘looked like a big bushfire.’

The man in his 40s and the woman were both taken to hospital for smoke inhalation.

He remains in a serious but stable condition, while she woman was expected to be released Saturday evening.

A 59-year-old woman is believed to have lived at the house with her three cats, but only one was found alive.

The property was taped off due to asbestos, and while the blaze has been deemed accidental, the cause is yet be determined. 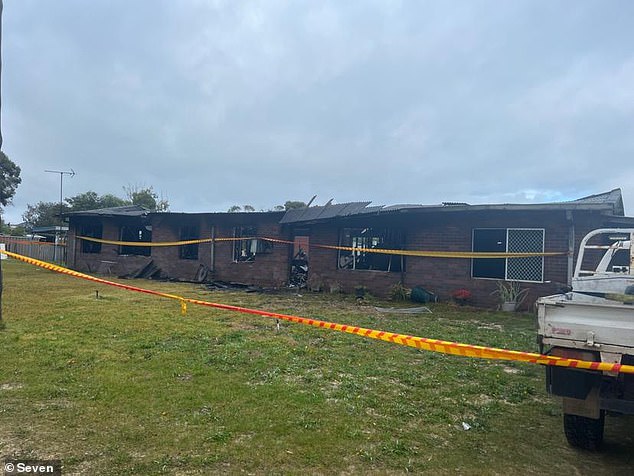 A 59-year-old woman is believed to have lived at the house with her three cats, but only one was found alive (pictured, duplex that was destroyed by fire)