A heavy police presence was established around the president’s former residence with video footage showing at least five dump trucks and and an NYPD bus lined up next to each other.

A small number of protesters began to gather outside the building from Tuesday afternoon as larger groups gathered elsewhere in the city.

It came as the NYPD Chief issued a warning to would-be troublemakers earlier on Tuesday, despite Mayor Bill de Blasio claiming that businesses had no need to fear any looting, as was seen in the summer amid Black Lives Matter protests.

Tonight, the NYPD said that parts of Manhattan could become ‘freeze areas’ with no cars or pedestrians allowed if looting were to break out. Hundreds of officers are also being deployed to areas where protesters typically gather. 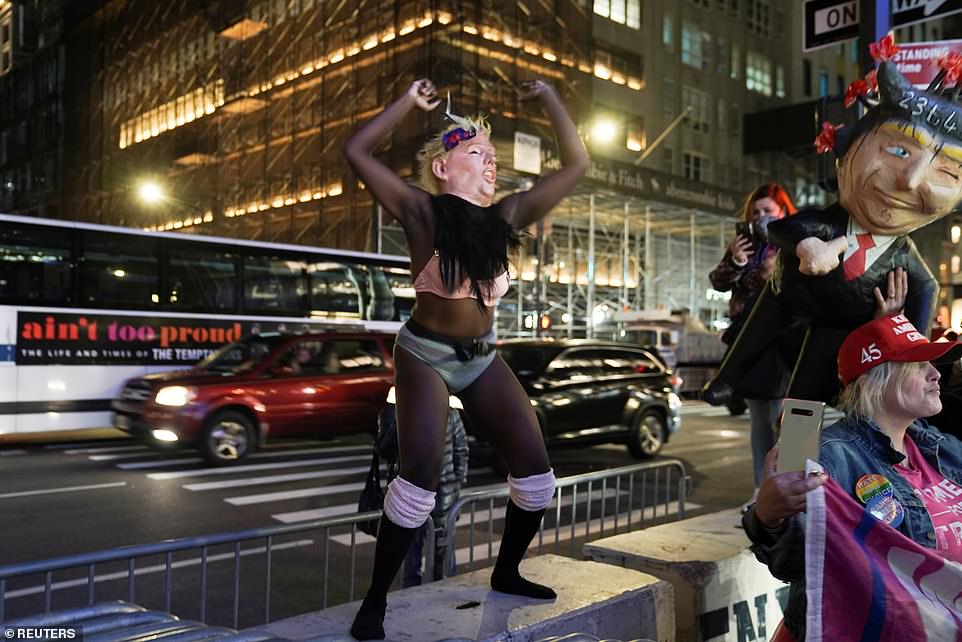 A woman with a U.S. President Donald Trump mask dances outside Trump Tower on election day 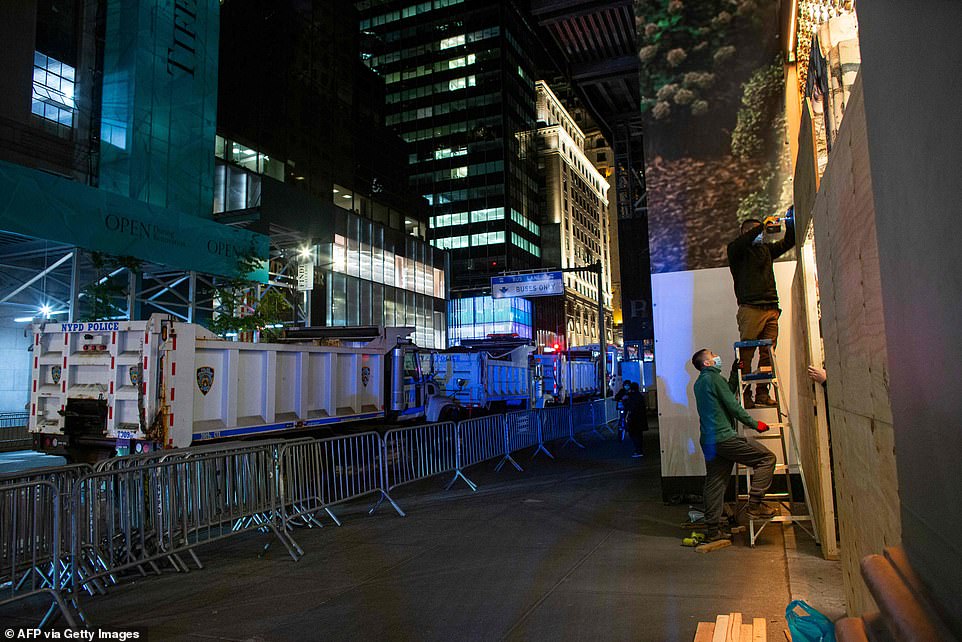 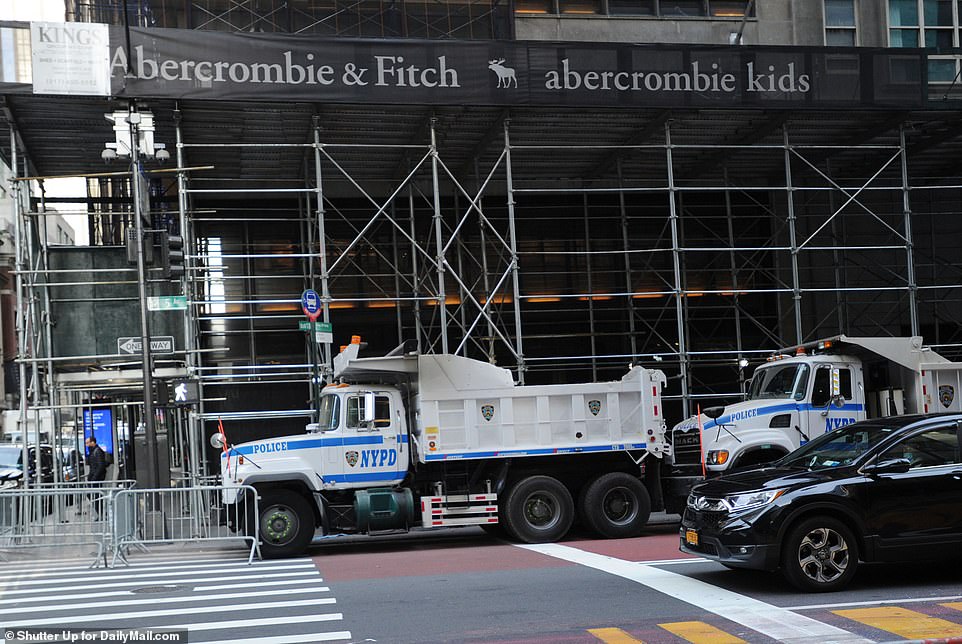 The trucks are used as a dense, protective barrier in the event of a bomb detonating 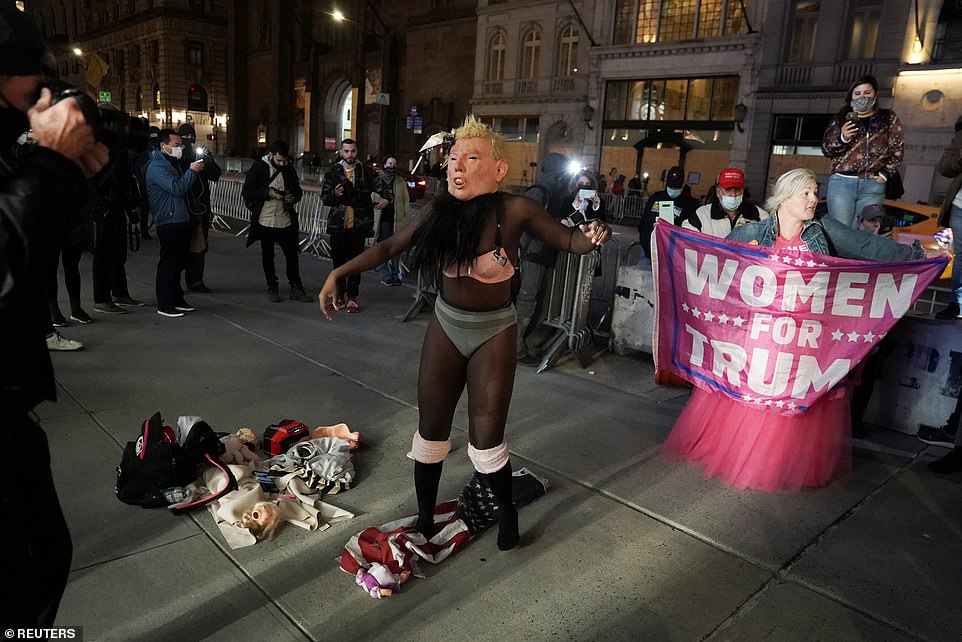 According to Business Insider, trucks filled with sand, such as those lined up on Fifth Avenue, were also used on election day in 2016 to barricade the building.

The vehicles are used to create a dense, protective barrier in the event of a bomb detonating.

The heavy police presence around Trump Tower comes as businesses in Midtown Manhattan have spent the last week barricading their doors and windows, expecting unrest to break out as results begin to slowly pour in on Tuesday night.

Mayor Bill de Blasio that there was ‘no reason’ for businesses to board up their windows ahead of election day.

‘We do not have a specific threat… we are not giving guidance to do that but we certainly understand,’ he said during a press conference Tuesday.

He was slammed as ‘wrong’ and ‘clueless’ by critics including the Sergeants Benevolent Association, the largest NYPD union, which said chaos was ‘inevitable’. 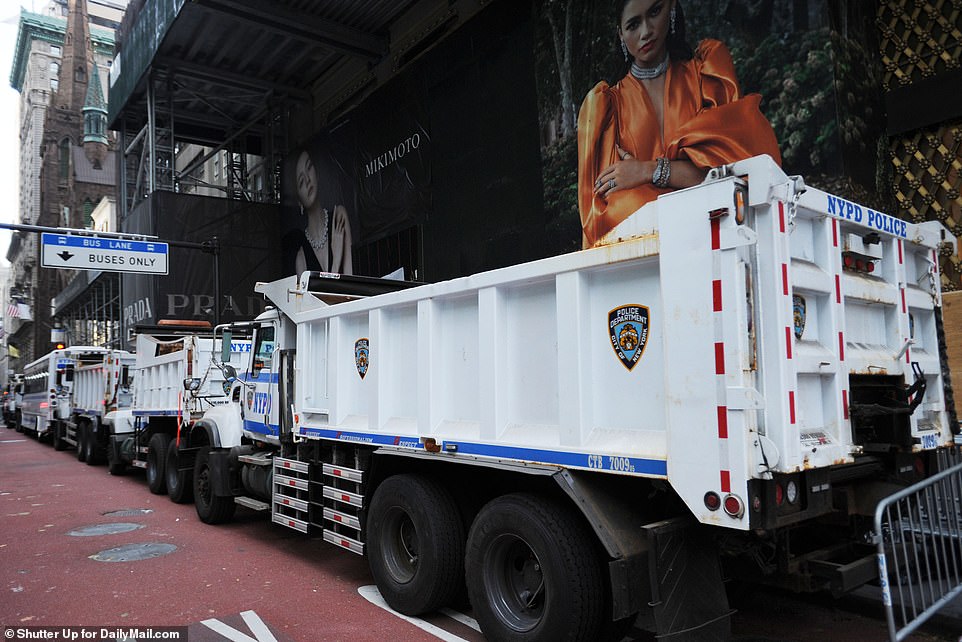 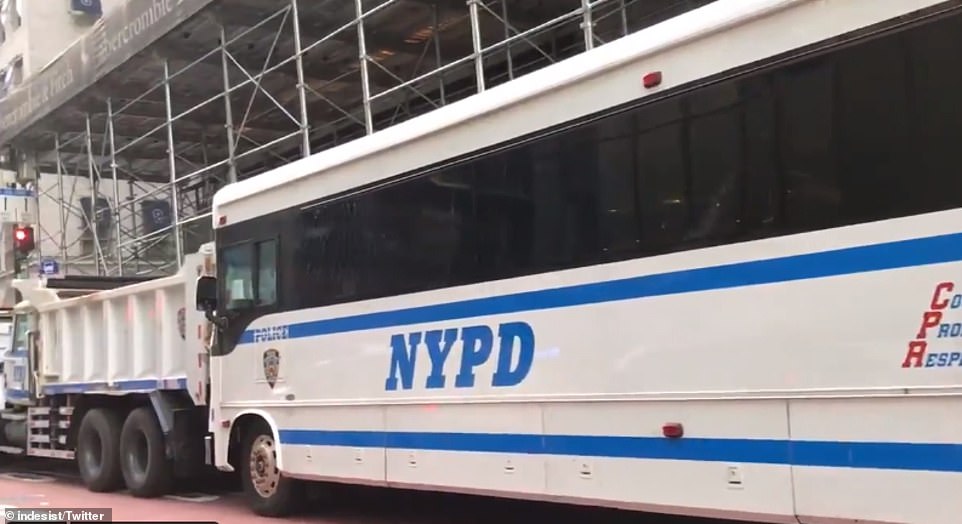 NYPD Chief Terence A. Monahan also appeared to anticipate unrest Tuesday as he issued a stark warning to activists, cautioning ‘don’t even try it’.

‘We know who you are and you will be arrested,’ he said.

‘Listen, we all know there’s an election today, who knows who’s gonna win, who’s not gonna win, what the results are,’ Monahan added outside 1 Police Plaza. ‘We have no intel of any problems right now, but that’s why we’re all working.

‘We’re gonna have thousands of cops working tomorrow specifically for whatever may occur. So we’ll be ready.’

Yet he added that the department had not come across any social media intelligence so far to indicate that there would be a threat.

NYPD Commissioner Dermot Shea also said on Tuesday morning: ‘The police officers are going to be out in force.

‘They’re going to have zero tolerance for it. Zero tolerance. I can’t be any more clear than that.’ 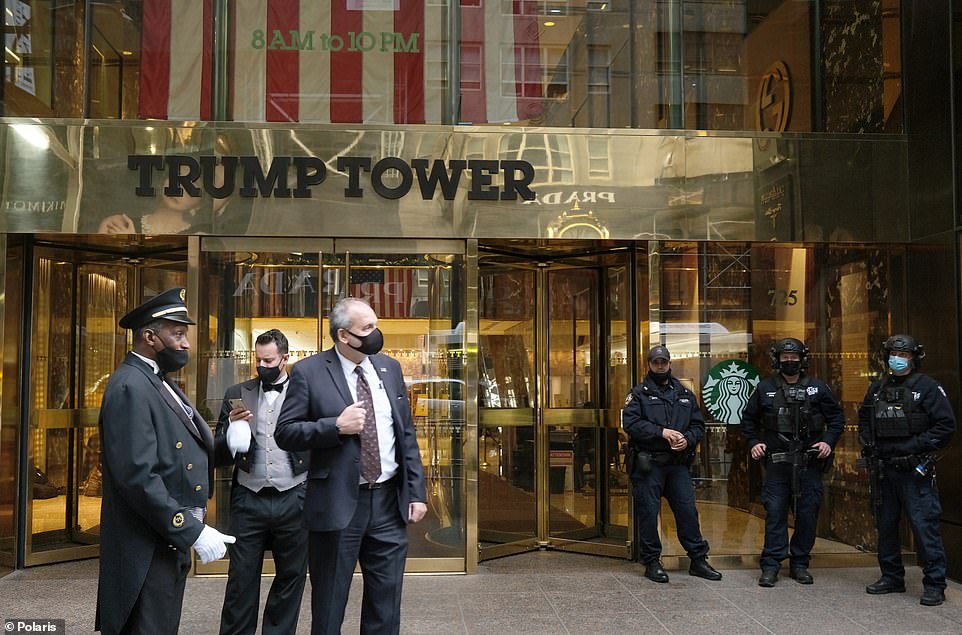 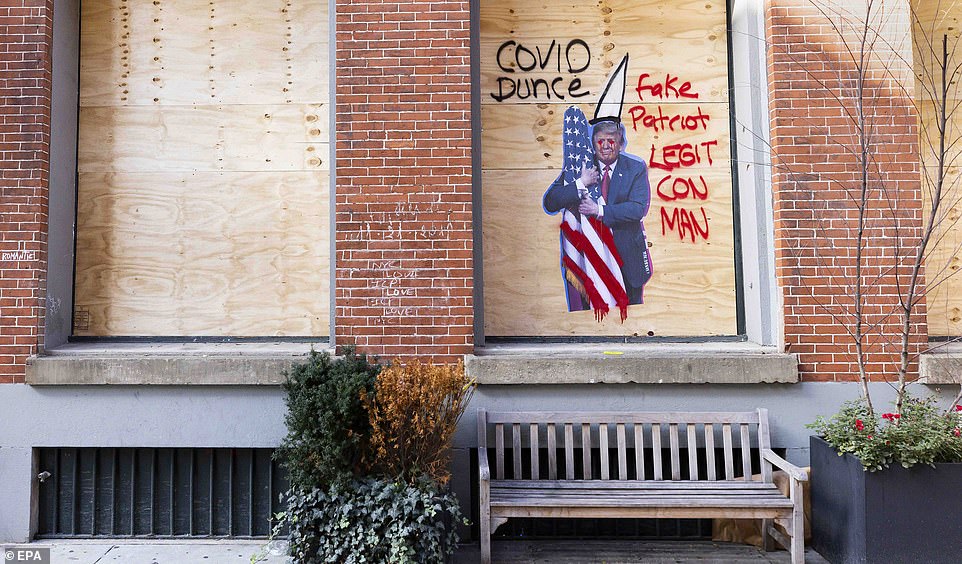 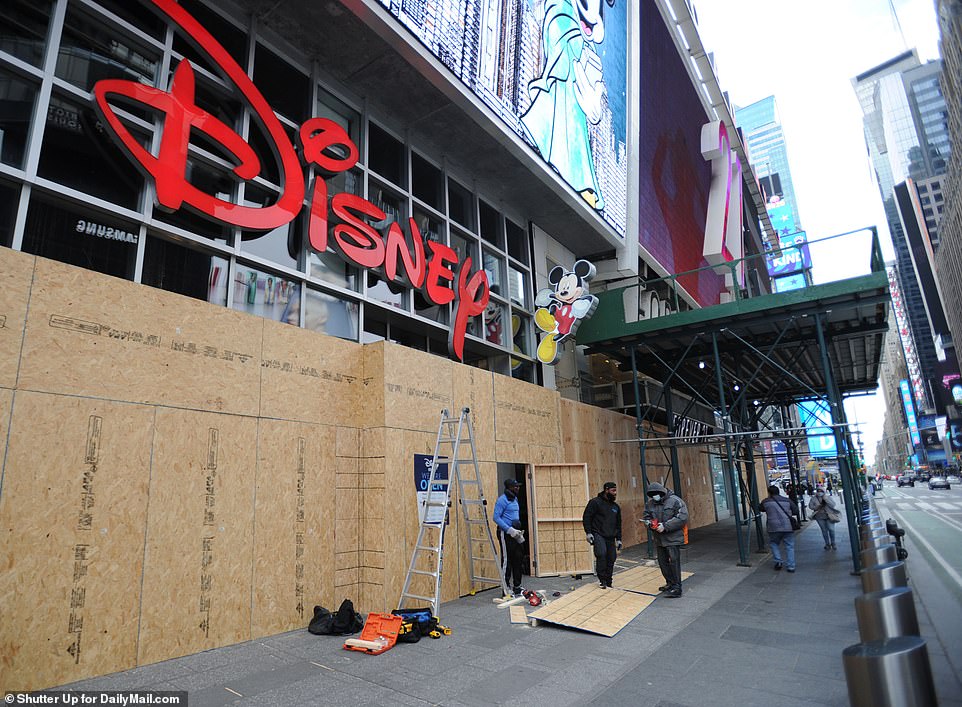 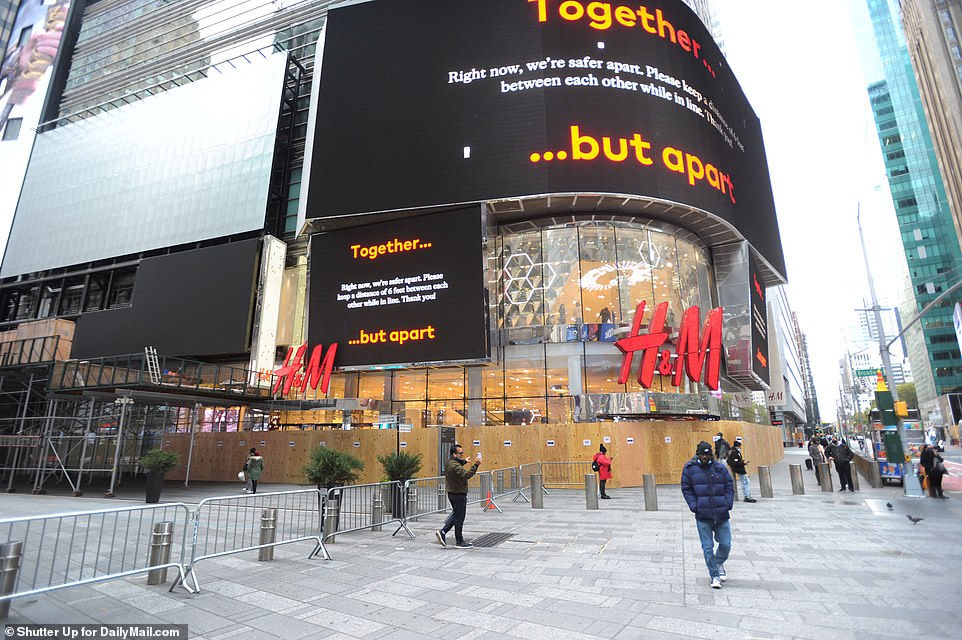 The NYPD confirmed on Tuesday evening that they had plans in place to establish car and pedestrian-free zones if large-scale looting began to occur, ‘freezing’ off parts of the city. Monahan told Fox News that he did not expect to implement these contingency plans.

According to NBC, more than 1,000 cops were gathered on Tuesday evening on Randall’s Island to be briefed on known agitators and deployed to known protest locations across the city.

Cops told NBC that they planned to allow protesters to get their message across but would have no tolerance for any violence or looting, stating that they were ready to take action if peaceful demonstrations begin to change or if any crimes are committed.

Yet the heavy police presence did not deter protesters from taking to the streets on Tuesday afternoon to encourage New Yorkers to head to the polls. A small number of protesters gathered in Times Square further downtown from Trump Tower to urge people to use their vote.

Further demonstrations were organized for McCarren Park in Brooklyn from 7pm and Union Square in Manhattan from 8.30pm, just 30 minutes before New York polling stations were due to close.

In Brooklyn, Terrence Floyd – whose brother George died in the custody of Minneapolis police in May sparking months of civil unrest across the country – rallied crowds to vote. 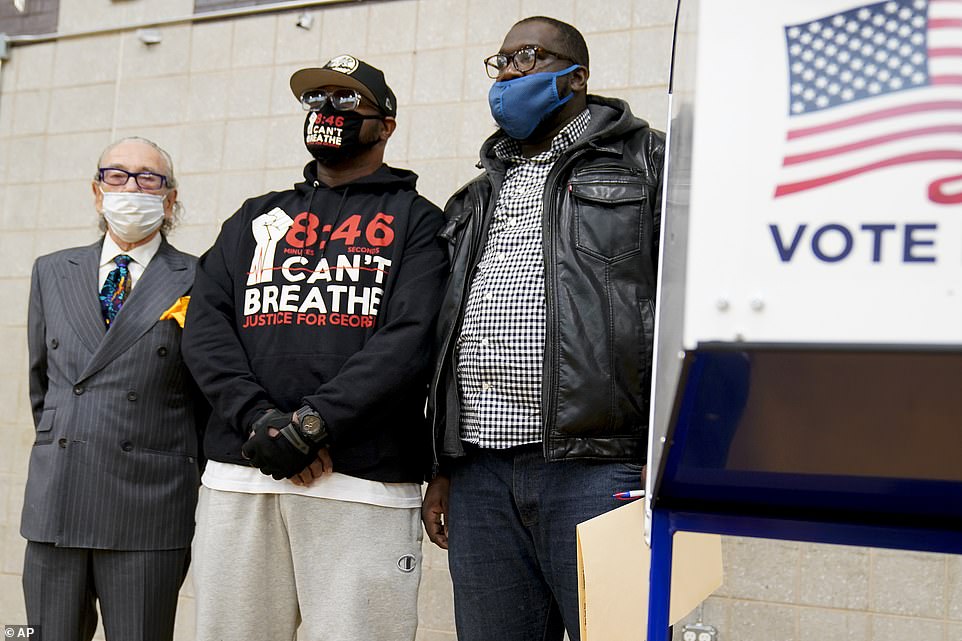 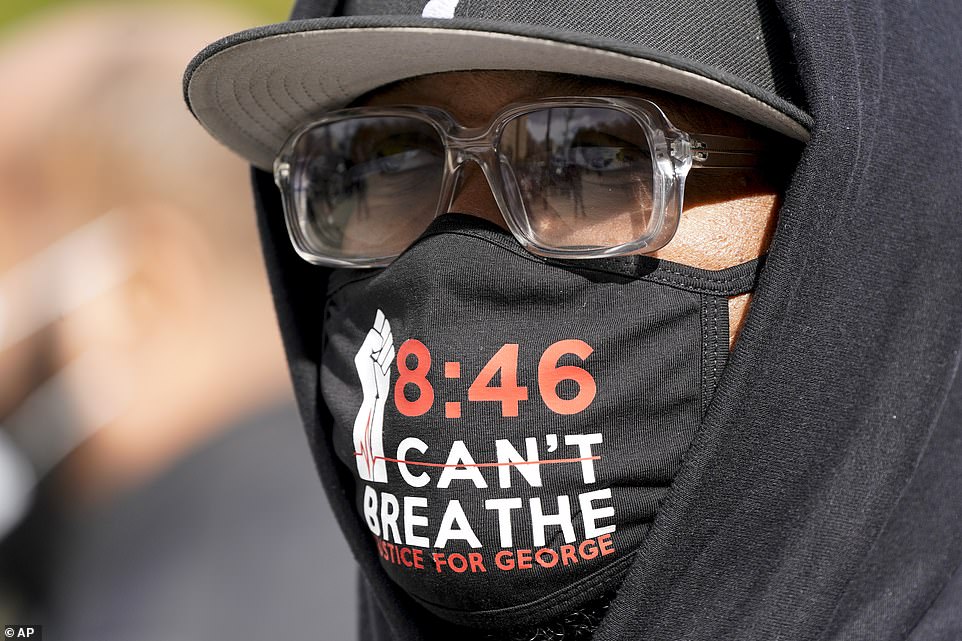 As he addressed voters, he wore a black hoodie and face mask included the words ‘I can’t breathe,’ ‘Justice for George,’ and ‘8:46,’ the number of minutes and seconds authorities initially said a white officer held a knee to his brother’s neck until he became unresponsive.

After famously urging calm as anger spilled onto the streets over his brother’s death, Terrence planned to spend Election Day following up on a less-noticed part of his emotional plea to protesters: please vote.

He spent the afternoon driving around Brooklyn looking for potential voters, with a loudspeaker and a microphone he used to address them from an SUV he was driving in with his attorney.

‘If you don’t vote, you cannot complain when something goes wrong,’ he said to a crowd gathered outside of Brooklyn Museum. ‘I’m out here to let y´all know that I voted, because I can’t talk the talk, if I don’t walk the walk.’