A grandmother-of-eight is able to go on long walks and 94 mph rollercoasters for the first time in two years after an operation to repair her paralyzed diaphragm allowed her to breathe normally again.

Becky Smeltz, 70, from Ohio, lost 30lbs in a month in 2019 after an ‘excruciating’ pain leaving her unable to eat or sleep erupted in her diaphragm.

Doctors at the Cleveland Clinic diagnosed Smeltz with nerve system disorder neuralgic amyotrophy which had paralyzed her diaphragm, a muscle beneath the lungs that helps regulate breathing.

She was initially told it would clear up in six months, but when this did not happen they performed surgery a year-and-a-half later to tie down the muscle.

Smeltz, who also has three children, said she felt better ‘immediately’ after the operation and went back to her old activities in weeks — including riding rollercoasters at Cedar Point theme park, Ohio, with her grandchildren.

Paralysis of the muscle is uncommon, but when it happens the lung capacity is reduced to about 70 percent of normal. In most cases, it clears up on its own but in cases where this does no occur surgery may be needed.

Becky Smeltz, 70, from Ohio, was left unable to eat or sleep after a persistent ‘excruciating’ pain erupted in her abdomen in 2019. But after an operation the grandmother was able to go back to riding rollercoasters at Cedar Point in Ohio with her eight grandchildren (pictured) 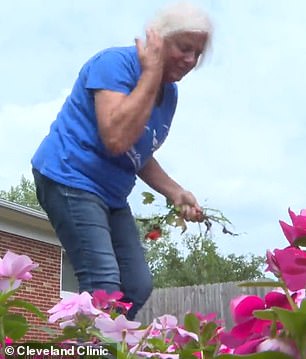 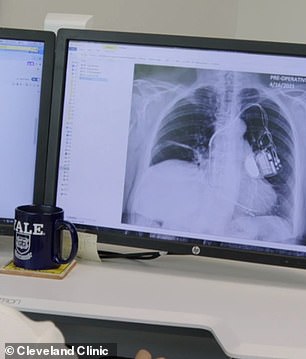 Smeltz was initially told by doctors to wait six months to see whether the condition would right itself. When that did not happen she was signed up for surgery – but had to wait two years

Smeltz said she had been taking her grandchildren — who are aged 10 to 20 years old — on rollercoasters for years.

The family’s favorite coasters are the Millennium at Cedar Point theme park, which goes up to 94 miles per hour (mph) and the Steel Vengeance which goes at 74 mph.

‘From the time they were tiny, I wanted all of [my grandchildren] to love riding rollercoasters and having fun at amusement parks,’ she said.

What is the diaphragm? And what happens when it is paralyzed?

The diaphragm is the flat muscle that separates the stomach and lungs.

It is essential to normal breathing in the body.

During respiration, it both widens and constricts the chest cavity forcing air in and out.

In people where the muscle has stopped working their lung capacity is reduced to up to 70 percent of the usual amount.

Symptoms of diaphragm paralysis include:

Treatment options include waiting for the condition to heal on its own.

But patients could also be offered pacemakers to help with their breathing and painkillers.

‘I got the oldest, who is now 20, riding them when she was probably about eight or nine — and everyone has progressively done it since then.’

There are no restrictions on riding rollercoasters for people who are short of breathe or have a nerve problem.

But Smeltz — who also has a heart condition — may have chosen to avoid them because of concerns it could inflame her condition and spark pain.

It was not clear why the grandmother was asked to wait two years for surgery.

But this could be due to doctors needing this long for the muscle to become loose enough for them to tie it down, or delays sparked by the COVID-19 pandemic.

It was not clear whether the grandmother was offered any other treatments during the wait, such as painkillers.

Smeltz’s battle with her health began in April 2019 when sharp pains erupted in her abdomen.

She went to a chiropractor the next day — but then returned 48 hours later after the pain did not ease.

The patient was then referred to a local doctor, who did some X-rays but also discharged her saying the condition would likely ‘clear up on its own’.

Over the next month Smeltz developed a pain that was so excruciating she struggled to eat or sleep.

Describing it, she said: ‘It was just excruciating all the time. All day. And the worst was at night.’

She returned to the doctors again when the pain also stopped her from taking a deep breath, who referred her to the Cleveland Clinic.

It was at the Cleveland Clinic that she was diagnosed with the paralyzed diaphragm.

It is not clear how many Americans suffer the condition every year, but the prognosis is generally good with most patients returning to normal health within two years.

The diaphragm is the flat muscle that separates the stomach and lungs, and assists with breathing by widening and constricting the chest cavity to force air into and out of the lungs.

Doctors there waited two years before signing her up for surgery to ease the condition. 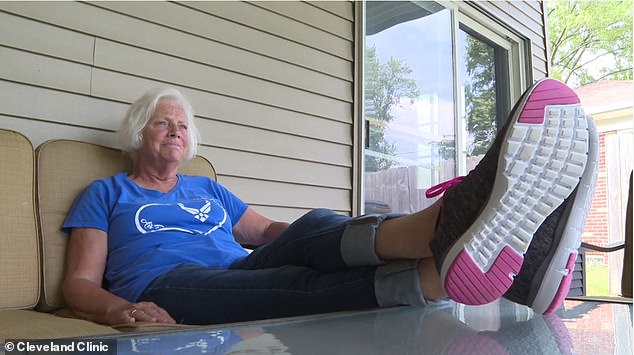 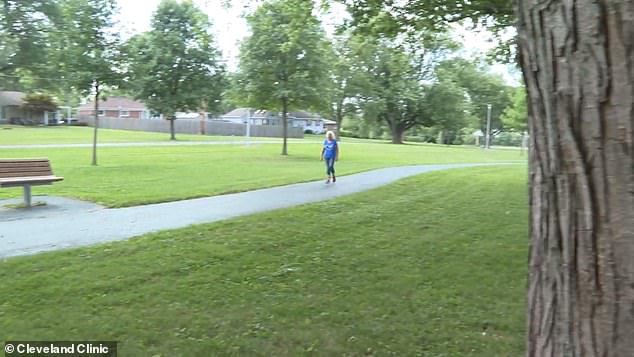 These included going for long walks (pictured). The grandmother was thrilled with her recovery

Describing her surgery Dr Alejandro Bribriesco, a heart surgeon at the Cleveland Clinic, said: ‘I usually perform this with four small incisions, just enough for my camera and the instruments.

‘Then with a series of permanent stitches, just sewed down the diaphragm so that it’s taut and flat.’

Symptoms of diaphragm paralysis include shortness of breath when lying flat and difficulty breathing.

Treatment options include waiting for the condition to heal on its own, and offering patients pacemakers and painkillers to help with the condition.