GPs could soon offer patients a ten-minute scan to check for serious bowel conditions during a routine appointment.

The portable device can help doctors spot early problems such as ulcerative colitis – a painful disease that causes ulcers in the colon – and even cancers.

If something sinister is spotted, patients can be fast-tracked for treatment, or, if nothing serious is found, they can be immediately reassured.

It could mean that patients who visit their GP suffering bleeding, changes in bowel habits and abdominal discomfort avoid the long wait for a colonoscopy, which requires sedation and must be carried out in a hospital or specialist unit.

Currently this is the only way to either detect or rule out serious bowel disease.

The new device, called LumenEye, consists of a small disposable probe, about 8in in length, with a high-definition camera at the end.

It looks at just the lower part of the colon, whereas a colonoscopy uses a long flexible tube and camera to examine the entire large intestine.

The images from LumenEye are shown in real time on a screen. Both are housed in a small case, meaning it is easy to transport and store, and undergoing this scan is painless and requires no anaesthetic.

LOOKING UP: A probe with a camera can spot suspicious-looking tissue in the colon in real time

Colorectal surgeon James Kinross, who specialises in bowel cancer treatments at Imperial College London, said: ‘If a patient has worrying symptoms and a physical examination can’t determine an obvious cause, GPs tend to refer them for a colonoscopy. It means these services are dealing with everything from relatively benign problems like haemorrhoids to more serious things, and are completely overburdened.

‘This tech won’t replace colonoscopies, but it will help GPs work out exactly who needs to be sent for further testing and who doesn’t.’

The LumenEye, is already being used in more than a dozen NHS hospitals to keep a check on ulcerative colitis patients.

But now there is some evidence it could be used to aid diagnosis of other conditions. In a study carried out at Imperial College London, 130 patients suffering symptoms such as bleeding or changes in bowel habits, which could indicate cancer or another bowel disease, were given the test.

It was, found experts, an accurate way of spotting problems that required further investigation and weeding out those that didn’t. During the trial, four cases of bowel cancer were picked up.

Dr Tanveer Ahmed, a GP at the Shifa Surgery in Blackburn, has been trialling the device in an effort to help tackle the nine-month wait for a colonoscopy in his area.

He said: ‘Before, if a patient had bleeding we could look to see if anything was visible externally or perform an examination with a finger. The LumenEye lets us view inside the rectum in real time. The procedure takes ten minutes at most, and it’s very easy to do.

‘If we have any questions, then a consultant can log in and view the video too and offer an opinion. It means we’re now able to put many more patients’ minds at rest, and offer them reassurance that there is nothing serious to worry about.’

One patient in Blackburn to have benefited from LumenEye at her GP surgery is Sarah Guildford, 29, who has Crohn’s disease. The condition is similar to ulcerative colitis but can lead to ulceration and inflammation along the entire digestive tract.

She said: ‘I was given over-the-counter painkillers and told I’d need a colonoscopy before they could change my medication. I’d been on the waiting list ever since, and my symptoms were so bad at times all I could do was lie down.’

She was offered the LumenEye procedure at Shifa Surgery in April. ‘It took about ten minutes and I went home straight after,’ she added. ‘My GP sent the video to a consultant, and they agreed to prescribe stronger medication.

‘We’ve repeated the process twice. I couldn’t recommend more strongly that other GPs start offering their patients this option.’

Weird science: Cocktail that burns you like a molotov 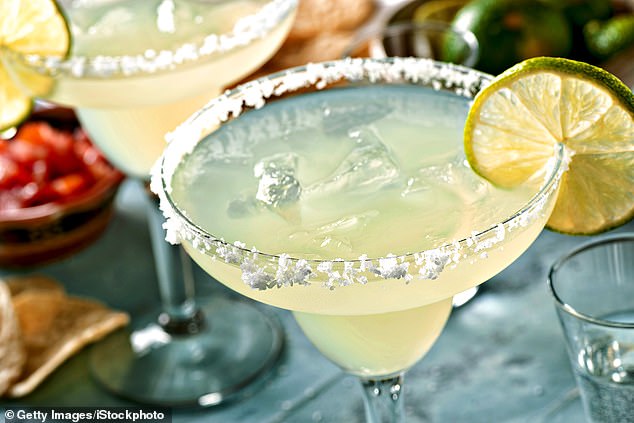 Mixing a margarita cocktail in the sun could lead to second-degree burns and a trip to hospital, doctors warn.

The drink, made with tequila and triple sec, contains a somewhat surprising key ingredient that can present a health hazard: lime juice.

Molecules in citrus fruits can react with sunlight to trigger a burning condition on the skin – phytophotodermatitis – also known as Margarita Burn.

One case, in The Journal Of The American Board Of Family Medicine, details a 26-year-old woman who sliced 24 limes for a pool party.

A human thigh bone is strong enough to support the weight of an elephant.

The femur, the longest and strongest bone in the body, connects the hips to the knees and is so strong as it has to support the majority of a person’s weight.

And a 2002 study by the American Association for Anatomy concluded that an adult male femur bone could support roughly 6,000 lb (2,700kg).

Second strongest are the temporal bones, situated at the base of the skull, which protect some of the most crucial parts of the brain.