The Government’s Scientific Advisory Group for Emergencies (SAGE) is to see its role in the coronavirus crisis downgraded with the nation’s new Joint Biosecurity Centre tasked with doing more of the heavy lifting, it was claimed today.

The JBC will take over monitoring the spread of the deadly disease with SAGE now expected to meet less often.

The move, first reported by the BBC, has sparked controversy among scientists who say nothing is known about who works for the JBC and fear it will become secretive organisation.

Funded by the Department of Health, the Joint Biosecurity Centre, is part of the NHS Test and Trace scheme and ultimately under the control of Baroness Dido Harding.

Experts today said it would be ‘worrying’ if the role of SAGE – a panel of top independent scientists who help the Government for free – was demoted.

Amid concerns about transparency SAGE now, for the first time, has revealed a list of its members and regularly publishes papers from its meetings, which happen behind closed doors with officials in Whitehall.

But top researchers fear the JBC would not commit to the same level of openness and that the science behind the Government’s decisions would be less clear.

The Scientific Advisory Group for Emergencies is set to see its role in the coronavirus response downgraded, according to reports. Two of SAGE’s key members, Professor Chris Whitty and Sir Patrick Vallance, are pictured alongside Boris Johnson in Downing Street in March

What is SAGE and what is the Joint Biosecurity Centre?

The Scientific Advisory Group for Emergencies (SAGE) is a Government panel of experts which is convened to respond to crises.

Its membership is made up of independent scientists and health academics who provide ministers with advice on how to respond to an issue.

Membership of SAGE depends on the nature of the emergency. Most of the members are not paid for their work.

It is responsible for providing ministers with impartial advice on which they can then base their decisions.

The Joint Biosecurity Centre was set up by the Government back in May in this year.

The JBC has been tasked with monitoring outbreaks and has been assisting the nation’s chief medical officers in setting the coronavirus threat level.

Its staff consists of epidemiologists and data analysts but it is currently unclear exactly how the JBC will operate with other bodies like Public Health England.

The JBC is currently tasked with helping the Government’s top experts to set the coronavirus threat level.

It is staffed by epidemiologists and data analysts who will now apparently be tasked with figuring out ways to best identify and stop new outbreaks of the disease.

It is headed by Dr Clare Gardiner, a qualified epidemiologist, medical researcher, and cybersecurity director at GCHQ.

She reports to Baroness Dido Harding, the chief of NHS Test and Trace and the entire JBC organisation falls under the control of the Department of Health, which answers to the Health Secretary, Matt Hancock.

Scientists fear that allowing scientists on the Government payroll to advise on Covid-19 will compromise its independence.

Dr Richard Horton, editor of the medical journal The Lancet, said on Twitter: ‘The replacement of SAGE by the Joint Biosecurity Centre as the principal mechanism for advising government on the intersection of Covid-19 science with policy is a setback for indpendent scientific advice to government, a setback for transparency, and a setback for public trust.’

Professor Susan Michie, a health psychologist at University College London, said: ‘With deaths in England over 100 a day and no clear strategy as to how to reduce this to zero Covid, it would be very strange and worrying to reduce the role, cohesiveness and frequency of SAGE and to transfer responsibilities to a new body, the Joint Biosecurity Centre, that is shrouded in secrecy, with no information about its members, how they were selected, and methods for governance, oversight and accountability.

‘Transparency of science and the relationship between science and policy is going to be key to public trust, which the Government needs to rebuild urgently.’

SAGE will now take more of a back seat role, meeting less frequently, and with its many sub groups reporting directly to the relevant ministers.

Insiders have pointed out that SAGE is designed to respond to emergencies but it is not necessarily set up to work for a lengthy period of time under massive pressure.

Some believe it is just not sustainable to expect SAGE members to continue working in the way that they have been.

A spokesman told the BBC: ‘Sage will continue to provide a single consensus view of scientific advice at the heart of government decision-making, to inform the national strategic response to the coronavirus epidemic.

‘As we move into the next phase of the coronavirus response, the JBC will complement the work of Sage, providing more operational focus including data analysis and epidemiological expertise, with the aim of ensuring that outbreaks of coronavirus are detected and brought under control quickly.’

It remains unclear exactly how the JBC will operate and how it will fit in and work with other government bodies like Public Health England.

Former government chief scientific adviser Sir David King said: ‘Are the JBC scientists going to be willing to be cross-examined by the media, or is it a body feeding information behind the scenes to ministers?

‘If it is the latter, then how will government regain the trust of the public?’

It came as Sir David faced criticism for his decision to set up the so-called ‘independent Sage’ group during the outbreak.

Some of his scientific colleagues have claimed the group has undermined official advice and suggested Sir David had set it up to satisfy his ego.

But Sir David hit back and told The Times it is ‘ironic that colleagues from the science advisory field should be criticising the emergence of independent Sage’ given the importance of transparency and impartial advice. 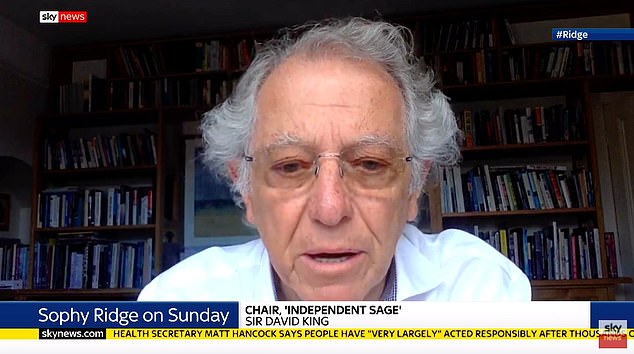