The government will spend £170million to kick-start 22 ‘shovel ready’ flood defence projects in England as part of a £5.2billion package – with victims now able to claim insurance to protect their homes from future water damage.

The funding comes on top of a long term £5.2 billion package being set out by the Government, to construct around 2,000 new flood and coastal defences that will better protect 336,000 properties from flooding by 2027.

The £5.2 billion, which will protect thousands of key sites such as schools and hospitals and ensure existing defences are well maintained, will avoid £32 billion of wider economic damage from flooding, the Government said. The government has announced £5. 4million in natural solutions to try and protect homes and businesses around the Severn Valley, such as Ironbridge, following floods earlier this year

And an extra £200 million will be provided for innovative projects, such as creating sustainable urban drainage schemes or wetlands to store water and boost wildlife at the same time, which will be tested out in 25 at-risk areas.

There are also proposed changes to the joint Government and insurance industry Flood Re scheme, as part of the plans being unveiled by ministers.

These include offering discounted premiums to households who have fitted protection measures such as air brick covers, and allowing payment of claims to include additional amounts to rebuild properties so they are better protected from future floods. 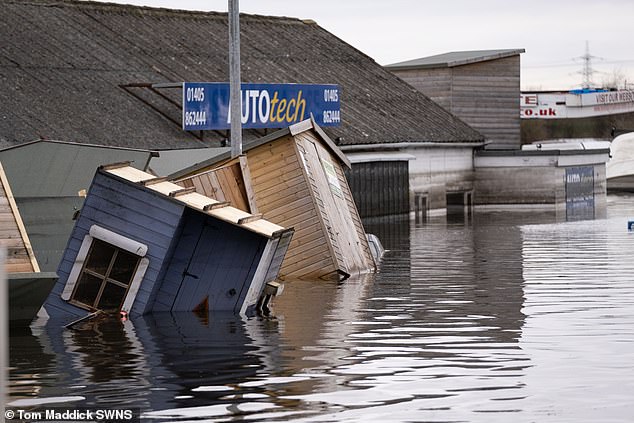 Snaith in East Yorkshire was also hit by flooding in March, around £21million will be spent on improving flood defences in nearby Leeds 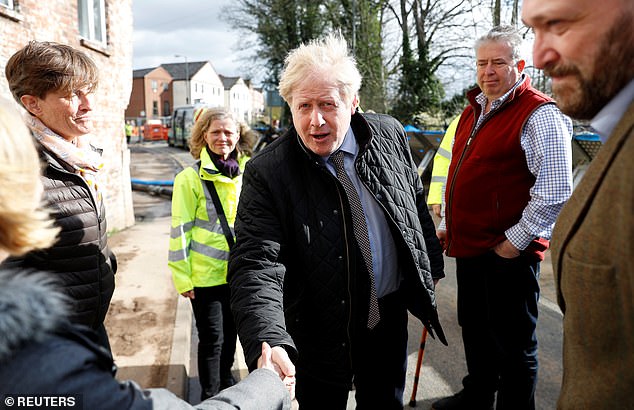 Boris Johnson faced fury in Bewdley, Worcestershire in March after arriving some 22 days after extreme weather rocked the Severn Valley

The Government also said it would review the policy for building in areas at risk of floods to protect future development, amid concerns over homes being built in the flood plain, and expand flood warning systems.

And the plans include a commitment to doubling the number of Government-funded projects which include natural solutions such as planting trees, restoring peatland and wetlands and looking after soils, which also have benefits for wildlife and tackling climate change.

What is the Flood Re insurance initiative?

Flood Re is a joint scheme between the Government and insurers aimed at making the cost of flood cover on household insurance cheaper.

The Flood Re website reads: ‘Every insurer that offers home insurance in the UK must pay into the Flood Re Scheme. This Levy raises £180m every year that we use to cover the flood risks in home insurance policies.

‘Flood Re works with insurers behind the scenes. When you buy home insurance cover, your insurer can choose to pass the flood risk element of your policy to us for a fixed price.

‘If you make a valid claim for flooding, your insurer will pay the claim. Later on, we’ll reimburse that insurer from the Flood Re fund.

‘In short, you buy home insurance in the usual way. We cover the flood risk and that helps to keep your premiums down.’

The £5.2 billion investment, announced in the Budget in March, is for schemes from 2021.

But the £170 million cash injection will help boost the economy as areas recover from the pandemic by starting work from this year on 22 projects, which are ready to go with help to reach required levels of funding.

As well as protecting homes, the projects will defend more than 10,000 local businesses and safeguard around 100,000 jobs that rely on those firms, the Government said.

Prime Minister Boris Johnson said: ‘Last winter I saw for myself the misery and upheaval that flooding can bring to lives and livelihoods and I said we would do more to help people.

‘This long-term plan will help push back the flood waters and protect hundreds of thousands of homes, businesses and livelihoods.

‘Our record investment will also stimulate economic growth across the UK as we build back better.’

Mr Johnson visited flood-hit communities during the 2019 general election campaign but faced criticism for not doing so during floods earlier this year.

By the time he visited Bewdley on the banks of the River Severn, Worcestershire, where some homes had been left underneath 2ft of water, the PM was met with cries of ‘traitor’.

Homes and businesses around the River Severn and in Yorkshire were rocked by flooding during Storm Ciara and Storm Dennis in the first few months of 2020.

Parts of Wales, including Newport were also left underwater during heavy rainfall.

Professor Hannah Cloke, from the University of Reading, told the BBC: ‘A commitment to review policies on developments on flood plains does not sound in tune with cutting red tape to build houses more quickly.

‘A fortnight ago, Boris was attacking ‘newt counting’, and bemoaning the pace of progress in the UK.

This mornings announcement promised a: ‘Review of policy for building in areas at flood risk, ensuring future developments are safe from floods.’

It also plans to investigate the current approach to designing against flooding, to better protect home from floodwaters.

She said today’s claims were ‘not in tune with cutting red tape to build houses more quickly.’

‘Sometimes being better and greener requires building more slowly and carefully, or we risk long-term economic and social costs that we cannot afford.’

Environment Secretary George Eustice said:  ‘The devastating impacts of last winter’s flooding were an important reminder of the need to continue to invest and accelerate action to reduce the impact of flooding on our communities.

‘Our record investment and ambitious policies will better protect homes, schools, hospitals and businesses, but we also recognise that we cannot prevent flooding entirely, which is why we will ensure that communities at high risk are more resilient.’

Emma Howard Boyd, Chair of the Environment Agency, said: ‘For every £1 spent improving protection from flooding and coastal erosion, we avoid around £5 of property damages.

‘The long-term commitments announced today will make homes, businesses and infrastructure more resilient to the accelerating impacts of the climate crisis.

‘Many communities are all too familiar with flooding, and now the risk is increasing for others too.

‘The Environment Agency is champing at the bit to deliver on the Government’s investment with better, and greener, flood schemes.’

The government is promising to start work on 22 ‘new shovel ready flood defence projects,’ either this year or in 2021.

It claims the scheme will have ‘strong local economic benefits,’ protecting more than 10,000 local businesses and safeguarding around 100,000 jobs.

In Leeds, the government will provide up to £21 million to for the Leeds Phase 2 Flood Alleviation Scheme which will protect more than 370 businesses and 3.300 jobs, and enable the development of land for the creation of homes and jobs. Around £1.3m will be provided for the Leeds Natural Flood Management Scheme.

In Sheffield and the Upper Don Valley, the flood scheme will protect more than 650 businesses and will play a part in delivering 70,000 new jobs in the city

In Tenbury Wells and the Severn Valley, two flood schemes will protect nearly 3,000 homes in areas which were badly affected by last winter’s floods, and protecting and creating more than 22,000 jobs along the Severn Valley. This will be supplemented by an additional scheme combining natural flood risk management, tree planting and habitat creation to reduce flood risk and capture carbon throughout the Severn Valley.

In Hebden Bridge, the funding will provide better protection for an area that was badly affected by last winter’s flooding, including nearly 1,000 businesses, while maintaining the importance of access to the river in the picturesque town.

In Lowestoft and the Suffolk coast, the funding will deliver a tidal barrier and flood walls to protect key infrastructure and businesses, and providing a boost to the offshore energy and tourism sectors.

In Derby, the flood scheme will protect over 1,000 businesses and 7,000 jobs, acting as a catalyst for regeneration in the city.

In Brighton, Hove, and Shoreham, £2 million will be spent to protect critical infrastructure on the south coast, including a power plant serving 300,000 homes and one of the largest cargo ports in the south of England.

In Falmouth, the flood scheme will reduce risks associated with surface water flooding and will allow further growth in a town centre waterfront location.

In Bude, the flood scheme will sustain existing protection, preserving the functioning of a key part of the town and thereby allowing continued growth in the local tourism industry.

In East Cowes, funding will be provided to reduce the risk of tidal flooding and increase resilience for properties and businesses including the ferry terminal.

In Padiham, the flood scheme will protect over 2,000 jobs and nearly 300 businesses, delivering of £30m of economic benefits.

In Lowdham, the storage of water in reservoirs will help to reduce flood risk in a village which has flooded three times in the last 12 months.

In Ponteland, the flood scheme will allow the continued protection of the town, local businesses to continue to trade (almost 500 will be better protected) and provide confidence for future growth and investment.