The Government is thought to be launching a Second World War-style Land Army Pick to help harvest Britain’s rotting crops.

The move is the result of a drastic shortage in the usual amount of seasonal workers coming to the UK from eastern Europe because of coronavirus-related travel restrictions.

A nationwide push is expected to be launched within weeks calling for anyone from students to laid-off hospitality workers to pick fruit and vegetables ‘in the national interest’, The Daily Telegraph reports.

The campaign would carry echoes of the Dig for Victory movement and the Women’s Land Army, the two major national programmes launched during the Second World War to keep the nation fed.

This comes after ministers were urged by farmers to consider deploying Army reservists to undertake the task.

The Department for the Environment, Food and Rural Affairs is also thought to be in discussions with the Department for Work and Pensions over the idea of directing job seekers towards seasonal work.

The farming industry is hoping to emulate the success of the call for people to help the NHS, which has elicited more than 600,000 volunteers.

Minette Batters, president of the National Farmers Union, said it was crucial the Government sent a clear message to farmers about the importance of continuing to grow fruit and vegetables. 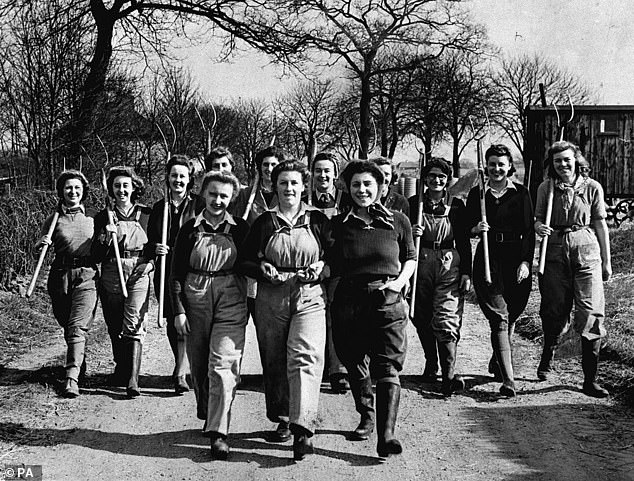 The campaign would carry echoes of the Dig for Victory movement and the Women’s Land Army (pictured), the two major national programmes launched during the Second World War to keep the nation fed

‘We are very much looking at a campaign to Pick for Britain, inspiring people to pick these crops in the national interest,’ Ms Batters told the Telegraph.

‘For the time being it is going to be very difficult, if not impossible, to bring anybody in, so we have to incentivise and empower a bespoke national campaign to motivate this ambition.

‘The Government is absolutely committed to doing this, but it has to be industry-wide with all of us pushing it. It’s essential that this is kicked off now.’

The paper said ministers were looking at plans for the campaign but were unable to say when it was expected to launch.