Dyson has been handed an order of 10,000 ventilators from the Government to save the lives of Britons floored by coronavirus despite the engineering giant never making them before.

Billionaire entrepreneur James Dyson has said ‘the race is on’ to get the medical machines created specifically for the pandemic into production as UK deaths hit 465.

The British engineering business, most famous for its vacuum cleaners, says it has a prototype tested on humans and could start delivering them from mid-April, pending ‘regulatory approval’.

Experts believe the NHS will need at least 30,000 of the devices to avoid huge numbers of deaths when the outbreak peaks, which could be as early as next month.

But ministers have admitted that they have not yet reached 12,000, with 8,000 currently available in the health service. Another 8,000 ‘off the shelf’ ventilators have been source but it is not clear how soon they will go into use.

Dyson has diverted hundreds of its engineers on to the ‘CoVent’ ventilator project.

But experts have claimed Dyson’s machine could be ‘many months away’ because of the time it would take to convert its production line and train staff to make they en masse.

British engineering giants JCB and Rolls Royce, as well as Airbus, have answered the Government’s plea for help develop and build ventilators.

Dyson has released pictures of their CoVent ventilator, shown here in a design image on the side of a hospital bed, as the Government placed an order for 10,000 to fight coronavirus 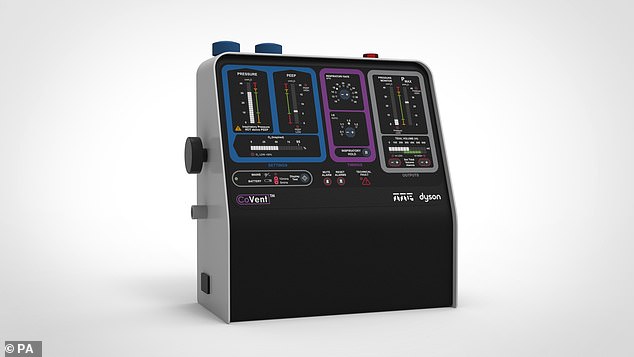 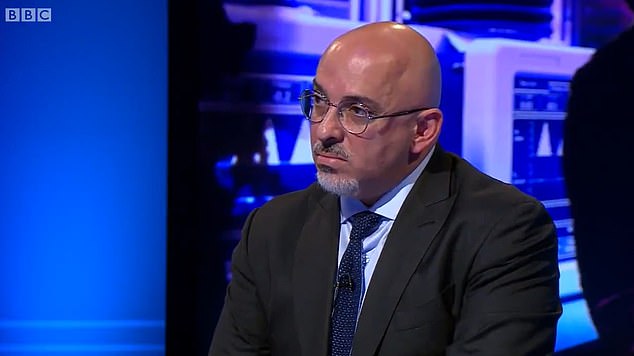 Business minister Nadhim Zahawi was grilled on the BBC’s Newsnight over ventilator numbers and when new ones would come on stream.

He conceded that the true figure currently available in the NHS was 8,000, despite Health Secretary Matt Hancock indicating there are 12,000.

Mr Zahawi was told that the NHS itself had contradicted ministers.

Mr Zahawi said: ‘The 8,000 are already in the NHS. But the NHS is also constantly procuring.

British manufacturing giants such as Dyson face months of arduous preparation before they can turn their hands to building ventilators.

Experts warn the appeal of British Prime Minister Boris Johnson for businesses to turn their factory production lines into ventilator conveyor belts may not be realistic.

The firms may need to overhaul their entire supply chain and have to hastily train their staff to make and check the critical life-support devices.

Reports suggest that British companies may soon be ordered rather than asked to manufacture ventilators much like firms 80 years ago during the Second World War.

Robert Harrison, a professor of engineering at Warwick Manufacturing Group, thinks that firms like JCB and Rolls Royce could, in theory, manufacture ventilators.

Mr Harrison says sourcing the parts required would be difficult, while training staff to build and test the life-saving apparatus is also fraught with difficulties.

‘They have relevant skills and capabilities, but given that all the design and manufacturing related information could be supplied to them, getting the parts and the tooling to manufacture such a thing will be a significant task, perhaps taking many months,’ he said.

‘Today’s ventilators are quite complex products – there is a computer-electronic control system with valves, regulators, filters, oxygen and exhalation sensors, flow meters.

‘Because something is needed very quickly, I think it would not be a case of utilising any new technologies but taking a tried and tested design and trying to reproduce this in volume and at the required level of quality.

‘As this is a life-critical piece of equipment, achieving this is a significant challenge given that, amongst other things, it requires an existing manufacturer of such equipment to provide their design and manufacturing-related know-how as an enabler.’

‘Which is why when you say 12,000, that is already procured in the system, but maybe not yet actually in place.’

Pressed on whether new ventilators from any source would be available in two weeks’ time, Mr Zahawi said: ‘That is exactly what we are hoping.’

In an email to staff, Mr Dyson said his eponymous company had designed the ‘CoVent’ at the request of Boris Johnson, and promised to donate 5,000 to the international relief effort.

Mr Dyson said teams of engineers had been working solidly on the design since receiving the call from the Prime Minister 10 days ago.

The company is now waiting for the design to receive regulatory approval so manufacturing can commence.

Created in partnership with Cambridge-based science engineering firm TTP, the new ventilator had to be safe, effective, efficient in conserving oxygen and portable, Mr Dyson said.

It also had to be bed-mounted, easy to use and not require a fixed air supply.

The battery-powered machine has been designed for use in different settings including field hospitals and when patients are being transported.

In an email to staff, Mr Dyson said the device drew on technology used in the company’s air purifier ranges, and was powered by a digital motor.

‘The core challenge was how to design and deliver a new, sophisticated medical product in volume and in an extremely short space of time. The race is now on to get it into production,’ he said.

He added: ‘Ventilators are a regulated product so Dyson and TTP will be working with the Medicine and Healthcare Regulatory products Agency and the Government to ensure that the product and the manufacturing process is approved.

‘We have received an initial order of 10,000 units from the UK Government which we will supply on an open-book basis. We are also looking at ways of making it available internationally.’

A spokesman for the company said the fan units needed for the device are already available in a very high volume.

The UK is going it alone to make more ventilators and protective gear for the NHS – without help from the EU.

Boris Johnson’s official spokesman was asked if the Government was looking to partner with a Brussels scheme to procure more protective equipment and ventilators for the NHS, as it battles a growing number of coronavirus cases.

The Prime Minister’s official spokesman said: ‘I think the short answer to that is no.’

But Number 10 stressed it is working with businesses currently manufacturing ventilators, as well as design companies, in order to increase the number of machines for those suffering from the most severe effects of coronavirus.

Dyson, the British company known for its vacuum cleaners and hand dryers, has already confirmed it will step in to produce ventilators for the NHS.

Private hospitals last week struck a deal to supply almost 1,200 ventilators to the NHS, as the UK looks to increase availability from 8,000 to 30,000.

The PM’s spokesman told reporters on Wednesday: ‘We have been in discussion with over 3,000 businesses who have come forward to offer support, whether that be in design, in manufacturing or delivery.

‘Our focus is on supporting established UK manufacturers to increase production of already-approved machines to help them reach the NHS more quickly.

‘We are testing proof of concepts from a number of suppliers with the support of a team of expert clinicians.’ 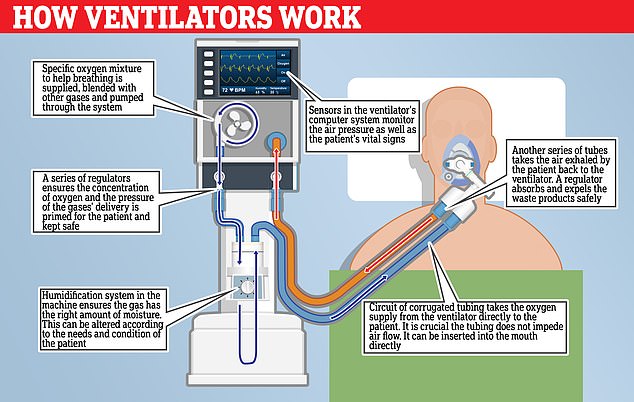 Vets have also been asked to supply mechanical ventilators which are usually used on animals, with the Royal College of Veterinary Surgeons (RCVS) writing to practices to call for donations suitable for human use.

In a Facebook post, the RCVS issued an ‘urgent nationwide call for NHS-compatible ventilators and other equipment’ that could be ‘vital in helping frontline medical professionals combat the coronavirus pandemic’.