Gordon Brown today accused Boris Johnson of a ‘huge act of self harm’ as he attacked the Prime Minister’s plans to tear up parts of the Brexit divorce deal.

The EU has given Mr Johnson until the end of the month to withdraw his proposals to override elements of the Withdrawal Agreement, with the bloc threatening legal action if he does not comply.

Brussels has also made clear that trade talks are at risk of collapse if Mr Johnson does not perform a U-turn – but Michael Gove has vowed the Government will not be changing course.

Mr Brown argued the Government’s strategy appears to be based on a belief that a ‘desperate’ EU will eventually back down but he said such a belief is ‘wrong’ and that the bloc is actually more likely to dig in.

The former PM’s intervention came as it emerged that Mr Johnson is now facing a rebellion of up to 30 Tory MPs who want to give Parliament the ability to veto any attempt by the premier to depart from the divorce deal. 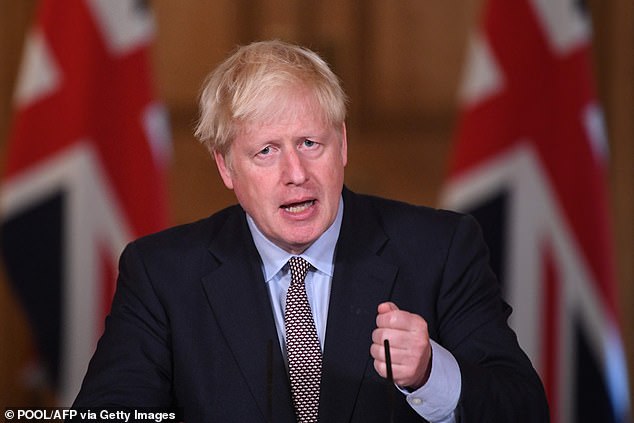 Mr Brown today became the third former prime minister to criticise Mr Johnson’s plans after Sir John Major and Theresa May also hit out at the current occupant of Number 10.

The former Labour leader told the BBC’s Radio 4 Today programme: ‘This is a huge act of self harm. We knew there was a debate over fishing and over state aid but then to explode the argument into breaking an international treaty has been condemned by so many people.

‘If I had done that when I was prime minister the Conservatives would have accused me of breaching the rule of law, they would have thrown everything at us and said ‘you cannot ignore an international treaty that you signed only a few weeks ago and you negotiated’.

‘But I think this is part of a strategy that I think is going wrong on the part of the Government.

‘They think they will have a European Council on October 16 and that they can persuade Angela Merkel to step in instead of Barnier, they think they can tie up a deal because people will be desperate.

‘I don’t think it is going to work that way because I think myself that Angela Merkel will probably be even more adamant to stick to the rule of law.’

Mr Brown said he feared the UK will end up with a ‘minimalist’ trade deal by the end of the transition period in December which the EU will axe if Britain fails to live up to its commitments.

‘What I fear is actually we are going to get some sort of deal but it is a minimalist deal that will be no tariffs now but if you break the level playing field… then we will intervene as a European Union,’ he said.

The latest row with the EU was sparked by the publication of the Government’s UK Internal Market Bill.

The legislation, which the Government is hoping to crash through the House of Commons in the next two weeks, will enable the UK to unilaterally make decisions about key issues, like customs arrangements between mainland Britain and Northern Ireland, contained within the Withdrawal Agreement.

Brussels is adamant that the decisions must be made by a joint committee made up of people from both sides.

The Government has admitted its proposals will break international law, prompting fury from Mr Johnson’s political opponents but also from Tory backbenchers.

Conservative MPs are now planning to try to amend the legislation in order to give Parliament a veto on any attempt by the PM to override the Withdrawal Agreement.

Sir Bob Neill, the Tory chairman of the Justice Select Committee, is tabling the amendment and reports suggest he may have the backing of up to 30 of his Conservative colleagues.

Sir Bob told Times Radio: ‘We are not natural rebels. We’ve all served as ministers, we know that this is a serious job, and we do our best to take the job seriously. So we don’t do anything like this lightly.

‘So I hope it’s at least an indication as a Government that really, you need to think very hard and carefully about going down this route. For heaven’s sake, try and find some other way.’

Rebelling against Mr Johnson’s Government on Brexit has previously resulted in Tory MPs being stripped of the party whip.

But a Government source told The Times that would not be the case if there is a rebellion on the UK Internal Market Bill. The source said ‘we’re not in the same place’ as previously on Brexit matters.

Even if the Bill makes it through the Commons there are major question marks over whether it will survive the House of Lords where peers are furious at the plans to knowingly break international law.

Lord Lamont of Lerwick, a former Tory chancellor and a Brexiteer, said there was ‘no way’ peers will agree to the legislation.

The row over the PM’s Brexit plans came as International Trade Secretary Liz Truss announced a free trade agreement between the UK and Japan has been secured in principle.

Ms Truss said it is Britain’s first major deal as an independent trading nation and it will increase commerce with Japan by an estimated £15.2 billion.