Republican leader of Pennsylvania’s state senate slaps down demand from Don Jr. to IGNORE voters and appoint their own pro-Trump electors to the Electoral College

According to WHYY, Philadelphia and Wilmington’s NPR affiliate, Corman’s spokesperson said the GOP controlled state legislature would not move to appoint partisan electors, despite President Donald Trump voicing unfounded concerns about voting in Philadelphia – where votes had given Democrat Joe Biden the lead in Pennsylvania Friday morning.

On Thursday, Trump Jr. retweeted conservative talk show host Mark Levin’s demand, which was written in all caps, to put fellow Republicans on the Electoral College, which would then sway the count toward Trump.

Pennsylvania state Senate Majority Leader Jake Corman, a Republican, dismissed a demand from some conservatives to appoint pro-Trump electors to the Electoral College, as Pennsylvania now seems likely to clinch the election for Democrat Joe Biden 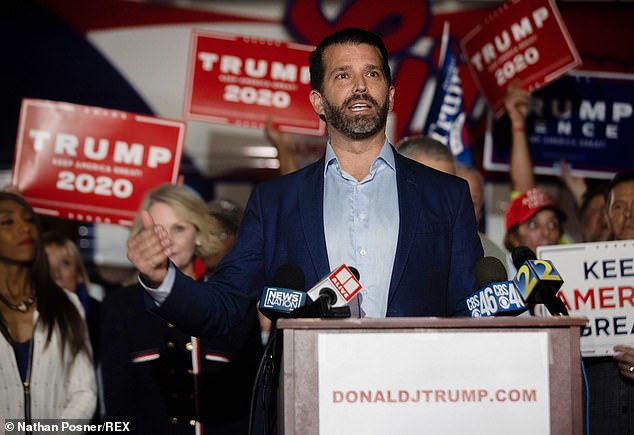 Donald Trump Jr. was among those pushing a message coming from conservative talk show host Mark Levin, which was that Republican state legislatures should appoint pro-Trump electors to the Electoral College, which could swing the presidency back to Trump 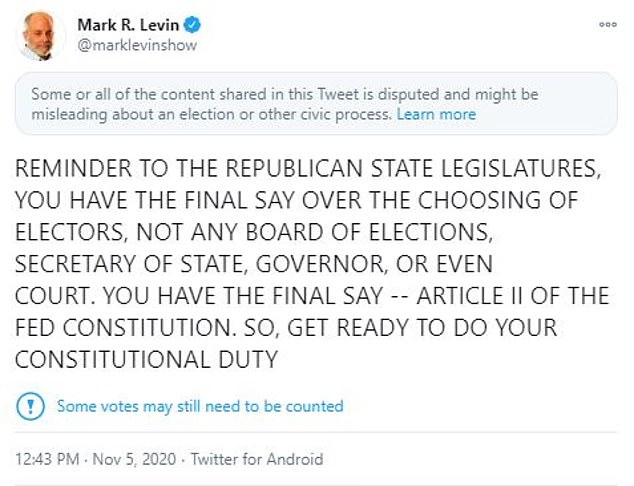 Even if Republicans tried to go rogue and follow through with Levin’s demands, changing Pennsylvania’s process in which Electoral College electors are appointed would require a sign-off from the governor, Democrat Tom Wolf, and so it would be vetoed.

Trump Jr. sent out a number of tweets Friday expressing dismay that his father was losing in four key swing states: Pennsylvania, Arizona, Nevada and Georgia.

Trends nationally show that Democrats tend to live in more urban environments, while Republican voters are in rural, smaller counties.

Biden has been able to catch up with Trump in Pennsylvania and Georgia because the outstanding votes were from cities like Philadelphia, Pittsburgh, Atlanta and Savannah.

For months Trump also warned his supporters against using mail-in ballots, suggesting they would be ripe for fraud.

That, however, led to most of his supporters ballots being counted on or directly after election day, followed by mail-in ballots getting a count.

Those mail-in ballots – even in Republican counties – have still favored Biden.

Speaking to Fox News Channel Friday morning about the state of play in Pennsylvania, Corman did not echo allegations of widespread fraud like the president and his son.

He complained about poll watchers being kept too far away in Philadelphia and suggested there could be an ‘interesting recount’ there.

‘I don’t have evidence of any misdoing,’ Corman said.