A ban on gay conversion therapy has been overturned in Republican-controlled Wisconsin.

Licensed therapists and counselors will be able to offer the technique for the first time since it was outlawed in 2020.

It has been outlawed in 20 states and D.C. The pseudoscience was made illegal in Wisconsin in 2020 before state Republicans blocked the ban from going into effect a year later.

Gov Tony Evers, a Democrat, stands in the way of the GOP-led legislature being able to permanently block the ban on gay conversion therapy, which is illegal in at least 20 states 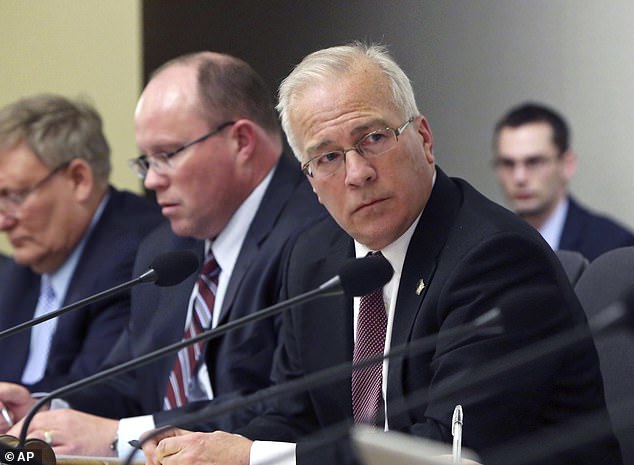 Wisconsin Republicans on the Joint Committee for Review of Administrative Rules voted in 2021 to let licensed therapists carry out conversion therapy by suspending the rule that bans it. The suspension briefly lapsed in December, but Thursday’s vote once again lifted the ban

Republican legislators voted 6-4 on party lines Thursday to suspend a state ban on gay conversion therapy that was finalized in 2020 by Wisconsin’s professional licensing board for therapists and counselors.

Conversion therapy maintains a person’s homosexuality is something that must be cured. The draconian ‘treatments’ used can range from shaming the person to hypnosis to inducing vomiting to electric shocks.

Wisconsin Republicans in the Joint Committee for Review of Administrative Rules rejected the policy after four hours of debate in which they argued that the Department of Safety and Public Standards, which oversees licensed therapists, counselors, and social workers and issued the ban in the first place, overstepped its legal authority.

The Republican committee’s move to block the ban comes on the back of a growing mountain of state laws across the country, such as in Florida, seeking to marginalize LGBTQ youth.

State Sen Kelda Roys, a Democrat on the committee, rejected the other party’s claim that the move was not about the actual practice of conversion therapy, but rather the rulemaking process itself.

Sen Roys said: ‘Republicans want to obfuscate by claiming this is about rules and process.’

‘It’s disappointing that the very first move the GOP is going to make this legislative session is to green-light abusive practices against children.’

Meanwhile, Sen Chris Larson, a Milwaukee Democrat, said the vote was an attempt to skirt the authority of an examining board that has been empowered by the state’s legislature.

Sen Larson said: ‘My Republican colleagues have developed an unusual and disturbing obsession with the bodies and identities of children and adolescents…and re-instituting conversion torture is just the latest example.

‘What they’re trying to do is nothing less than state-sponsored child abuse.’

The practice flies in the face of the accepted scientific consensus that sexual orientation and gender identity are immutable traits and attempts to change them are both ineffective and harmful.

Conversion therapy has been rejected by every mainstream medical and mental health authority for decades due to its incredibly harmful effects on the emotional health of LGBTQ+ people, especially children.

The Williams Institute at the UCLA School of Law estimates that as of June 2019, nearly 700,000 LGBTQ adults in America had been subjected to ‘conversion therapy’ with roughly 350,000 experiencing it as children.

The committee had previously attempted in 2021 to block the implementation of the ban. The Republican majority introduced a bill in January of that year to block the rule from taking effect but knowing that it would never pass by Democrat Gov Tony Evers’ veto authority, they placed it in a congressional committee effectively blocking the rule for the rest of the Legislature’s two-year session.

The ban was reinstated after lawmakers failed to permanently block it by the end of the last legislative session. It has been back in effect since Dec. 1, after Gov Evers won reelection.