Man vs Machine: Google’s ping pong robot pulls off a 340-hit rally – and the tech giant says it could soon be taking on the PROS

The advanced robotic arm is seen effortlessly sliding along its side of the ping pong table as it returns the human’s shots.

The monumental rally ends when the robot sends a weak shot into the net, more than four minutes after it started.

It currently plays ‘cooperatively’ with a human to get a good rally going, but according to Google its skills could be built up to match the level of any human.

The robot, called i-S2R, is seen effortlessly sliding along its side of the ping pong table as it returns the human’s shots

In i-Sim2Real, knowledge acquired by the robot during a simulation is used in a real-world environment.

i-S2R also alternates between training in simulation and deploying in the real world to build up its abilities.

Researchers had wanted to train it up in a simulation so it could play with humans in the real world, but they had a ‘chicken and egg’ problem.

‘How do we gather examples of a human interacting with a physical robot in order to model human behavior in simulation without already having a robot that can interact with a human?’ said Google engineer Laura Graesser.

Engineers therefore alternated between training in simulation and deploying it in the real world until it was good enough.

‘In each iteration, the human behavior model and the policy are refined,’ said Graesser. ‘We stop iterating when we can finally have fun playing with the robot.’

Google says future work would build a robot ‘coach’ that could adapt its play style according to the skill level of the human participant to keep things ‘challenging and exciting’.

However, engineers admit that table tennis is a ‘high-speed, dynamic task’ that requires the two players to react quickly to each other’s moves, making it a ‘challenging test bed for research on human-robot interaction’. 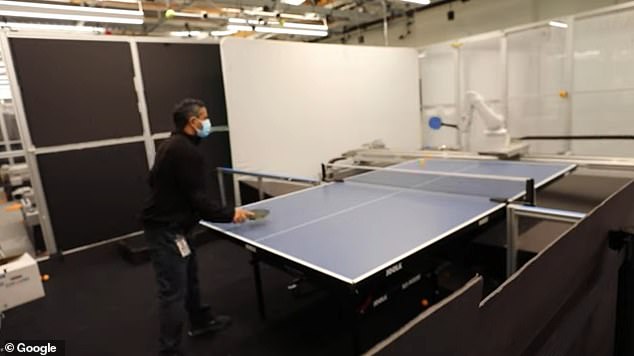 The monumental rally ends when the robot sends a weak shot into the net, more than four minutes after it started

In the video, the human engineer is generally sending shots down the centre of the table, although Google says it can ‘match the precision of amateur humans’ in its returns and placement.

Both man and machine are using a right-handed forehand orientation the whole time, but regardless the bot displays some impressive reaction speeds.

According to Google, i-S2R can also play table tennis opposite a human or another robot.

Google describes the technology as ‘a research platform for agile robotics’ that can answer questions about human-robot interaction and cooperation. 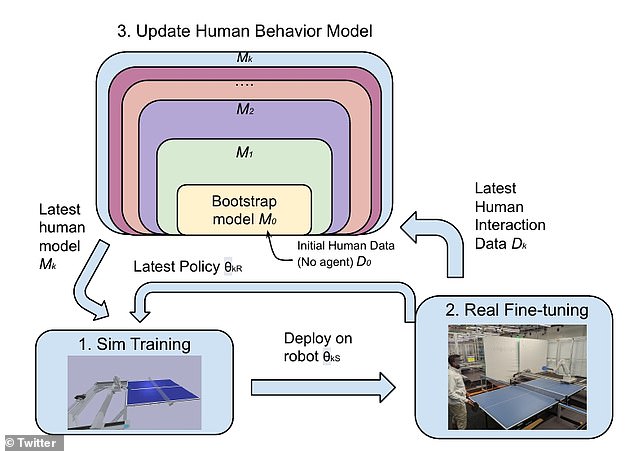 ‘Robot learning has been applied to a wide range of challenging real world tasks, including dexterous manipulation, legged locomotion, and grasping,’ Google researchers say in a blog post.

‘In this project, the goal for the robot is cooperative in nature – to carry out a rally with a human for as long as possible.’

This is not the first table tennis-playing bot; Japanese robotics company Omron has previously shown off its table tennis bot, called Forpheus, at CES in Las Vegas.

Forpheus has sensors that collect data about the opposing player’s facial expressions and physical movements to play a match.

Not all sporting ventures with robots have gone swimmingly, however; earlier this year, a chess-playing robot broke a child’s finger during a tournament in Russia.

A chess-playing robot broke a child’s finger during a tournament in Russia in July- and the incident was captured by CCTV.

The robot grabbed the seven-year-old boy’s finger because it was confused by his overly-quick movements, Russian media outlets reported, quoting the President of the Moscow Chess Federation – who seemingly blamed the child.

‘The robot broke the child’s finger – this, of course, is bad,’ Sergey Lazarev told Russia’s TASS news agency, while distancing his organisation from the robot.

The incident occurred at the Moscow Open on July 19. Lazarev said that the federation had rented the robot for the event, which ran from July 13 to 21.

Lazarev said that the machine had been hired for many previous events without incident, saying the boy went to move a piece too quickly after making a move.