Google will not comply with law enforcement requests from states for abortion data in the wake of the Supreme Court’s decision to overturn Roe v. Wade.

‘We, like many others, are continuing to review, unpack and understand the consequences of the Dobbs opinion from the Supreme Court,’ Google Chief Privacy Officer Keith Enright said in response to a question from CTech over the weekend.

The tech giant has historically complied with ‘valid legal processes,’ he said.

‘We are required to do so, however, we consistently push back on excessive requests for information from law enforcement and we are committed to promoting transparency so that users and individuals can understand and respond to their legislators, to ensure that the government is not overreaching in their requests for information,’ Enright explained.

A representative from Meta did not respond to a request for comment on how they would address this issue. A Twitter spokesperson referred Daily Mail to this blog post and released the following statement:

‘Protecting the privacy of people who use Twitter comes first. We’ll continue to assess legal demands judiciously, with our commitment to the safety and security of our users at the forefront.’

‘We have a long history at Google of pushing back overly broad or questionable demands from law enforcement, and a strong track record of success in defeating such requests for information if the legal authority behind them is not compelling,’ said Keith Enright, chief privacy officer at Google, seen above during a Senate hearing on consumer data privacy.

On Friday, the US Supreme Court held in the case of Dobbs v. Jackson Women’s Health Organization that the Constitution does not confer a right to an abortion.

The executive also said that Google was the first to offer ‘transparency reports’ detailing how many law enforcement requests it gets, how they were disposed of and how many are pushed back on.

In the post-Roe world, eighteen states already banned abortion and more may follow suit. A looming question is whether those states could then use data from Silicon Valley to track people who want an abortion, who research abortion or doctors who perform abortions.

When he was asked specifically how the company would respond if a state asked for data on all residents seeking abortion information, Enright replied: 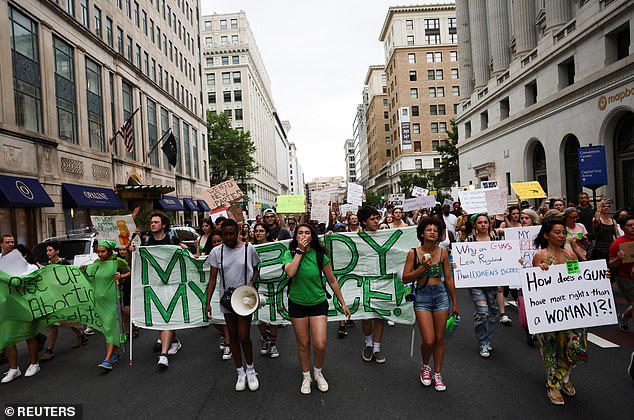 As soon as Roe was overturned, privacy advocates and members of the public began to ask whether tech companies would comply with data requests from states that ban abortion and threaten prosecution against anyone who seeks or performs the procedure. Abortion rights supporters are seen marching above

‘The hypothetical that laid out, I believe, relies on multiple unsettled questions of law, we would push back on such a request. I can’t yet opine on what theories we would reply upon but again, the law is unsettled in this area, the fact pattern described would result in a push back.’

‘We have a long history at Google of pushing back overly broad or questionable demands from law enforcement, and a strong track record of success in defeating such requests for information if the legal authority behind them is not compelling.’

More than half of all US states have some kind of abortion ban law likely to take effect now that Roe v Wade has been overturned by the United States Supreme Court.

According to the pro-reproductive rights group The Guttmacher Institute, there are 26 states that will likely make abortions illegal now that the Supreme Court has overturned the landmark 1973 ruling.

18 have existing abortion bans that have previously been ruled unconstitutional, four have time limit bans and four are likely to pass laws once Roe v Wade is overturned, the organization found.

Florida, Indiana, Montana and Nebraska, are likely to pass bills when Roe v Wade is overturned, the Guttmacher Institute said.

There are four states that have laws that state abortion is not a constitutionally protected right: Alabama, Louisiana, Texas and West Virginia.

After the Supreme Court draft was leaked, over 40 members of Congress sent a letter to CEO Sundar Pichai asking Google to limit its location gathering efforts to prevent it from being used by anti-abortion prosecutors in the event that Roe was overturned.

‘If abortion is made illegal by the far-right Supreme Court and Republican lawmakers, it is inevitable that right-wing prosecutors will obtain legal warrants to hunt down, prosecute and jail women for obtaining critical reproductive health care,’ the letter states.

Enright went on to detail the ways in which it is trying to protect user privacy with tools that allow people to auto-delete certain information and so forth. 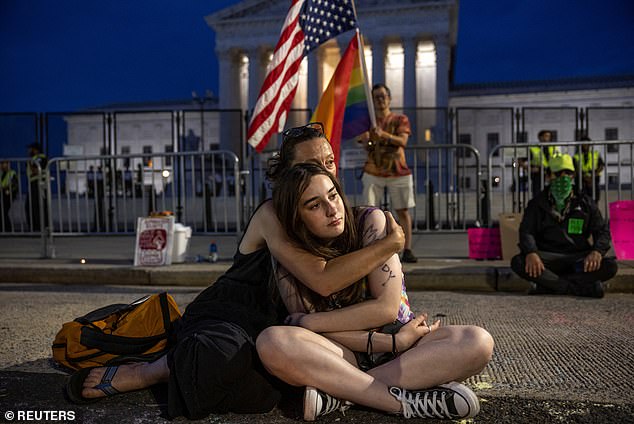 A representative from Meta did not respond to a request for comment from Daily Mail. Above: Lisa Turner, 47, holds her daughter Lucy Kramer, 14, during a candlelight vigil outside the United States Supreme Court in Washington, U.S., June 26, 2022

‘We are committed to keeping users safe all over the world when they use our products and services, and legal developments reinforce our commitment to do that.’

The digital rights nonprofit Electronic Frontier Foundation referred Daily Mail to a blog post detailing a wide range of things that companies can do to protect users in light of the SCOTUS abortion ruling.

‘In a post-Roe world, service providers can expect a raft of subpoenas and warrants seeking user data that could be employed to prosecute abortion seekers, providers, and helpers.

‘If your product or service might be used to target people seeking, offering, or facilitating abortion access, now is the time to minimize the harm that can be done.’