EXPRESS INFORMER > News & Politics > Google and Facebook had a pact to work together to dominate online ads, suit claims

Facebook and Google agreed to ‘cooperate and assist one another’ in case of an investigation into their pact to work together in online advertising, according to a new report.

An unredacted version of a lawsuit filed by 10 states against Google last week reveals the allegations about the deal with Facebook dubbed ‘Jedi Blue’ by Google, the Wall Street Journal reported late on Monday.

The code-name for the pact is an apparent reference to the fictional Jedi knights of the Star Wars film franchise.

The deal cut in September 2018 saw Facebook agree not to compete with Google’s online advertising tools in return for special treatment when it used them, according to the unredacted suit.

The draft states that starting in the deal’s fourth year, Facebook is locked into spending a minimum of $500 million annually in Google-run ad auctions, and alleges that ‘Facebook is to win a fixed percent of those auctions.’

Google and Facebook denied the allegations, saying there was nothing improper about the deal, with a Google spokesman noting that the partnership had been public for years.

Google CEO Sundar Pichai is seen above. Facebook and Google agreed to ‘cooperate and assist one another’ in case of an investigation, an unredacted draft suit claims 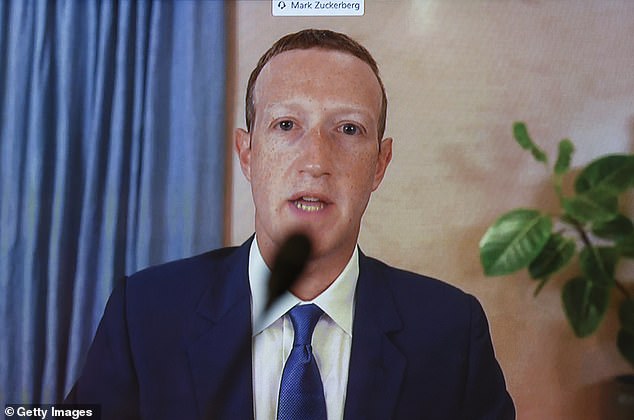 The spokesperson said that Facebook ‘participates in several similar auctions on rival platforms.’

‘There’s nothing exclusive about their involvement and they don’t receive data that is not similarly made available to other buyers,’ the spokesperson said.

Facebook, which was not accused of wrongdoing in the suit, did not immediately respond to an inquiry from DailyMail.com. ‘Any allegation that this harms competition or any suggestion of misconduct on the part of Facebook is baseless,’ a Facebook spokesperson told the Journal.

The new allegations emerged from a draft version of the lawsuit that was filed last week, showing claims that were redacted in the final version.

The states had accused Google of working with Facebook in an unlawful manner that violated antitrust law to boost its already-dominant online advertising business.

According to the draft version, an internal Facebook document described the Jedi Blue deal as ‘relatively cheap’ when compared with direct competition.

A Google presentation also said if the company couldn’t ‘avoid competing with’ Facebook, it would collaborate to ‘build a moat,’ the draft states.

According to the Journal, the lawsuit said that Google and Facebook were aware that their agreement could trigger antitrust investigations and discussed how to deal with them.

The companies agreed to ‘cooperate and assist each other in responding to any Antitrust Action’ and ‘promptly and fully inform the Other Party of any Governmental Communication Related to the Agreement,’ according to the draft suit.

A Google spokesperson told the Journal that such agreements over antitrust threats are extremely common.

The unredacted draft version of the lawsuit, which the Journal said it reviewed, also said that Facebook’s Chief Operating Officer Sheryl Sandberg signed the deal with Google.

The draft version also cites an email in which Sandberg told Facebook Chief Executive Officer Mark Zuckerberg and other executives that ‘this is a big deal strategically,’ the report said.

The lawsuit, which brands Google as an ‘internet Goliath’, targets the heart of the search giant’s business – the digital ads that generate nearly all of its revenue.

The suit was filed by Texas Attorney General Ken Paxton and joined by nine other Republican attorneys general.

It was prompted by complaints by publishers and other businesses whose publications rely on advertising revenue to survive.

Google and Facebook compete heavily in online ad sales and together capture over half of the market globally.

The two players agreed in a publicized deal back in 2018 to start giving Facebook’s advertiser clients the option to place ads within Google’s network of publishing partners, the lawsuit alleges.

While that deal was announced publicly, the lawsuit alleges that Google failed to disclose it would give Facebook preferential treatment and benefits, including access to the search giant’s data.

As part of the secret deal, Facebook agreed to back down from supporting competing software, which publishers had developed to dent Google’s market power, the complaint said.

‘Facebook decided to dangle the threat of competition in Google’s face and then cut a deal to manipulate the auction,’ the complaint alleged, citing internal communications.

A separate antitrust suit was also filed last week by a bipartisan group of attorneys general in 35 states, as well as Washington D.C., Guam and Puerto Rico.

That suit alleges that the search giant has an ‘illegal monopoly’ over the online search market that hurts consumers and advertisers.