EXPRESS INFORMER > Business & Finances > Gone to pot: Our roads can be atrocious… it’s time to fight back

Brace yourself. As Britain marks National Pothole Day this Sunday, motoring experts are warning that the three months from January to March are the worst in the year for a rising number of holes in our crumbling roads as compensation claims soar.

A combination of the earlier freezing winter weather and a lack of sufficient maintenance means that motorists and other road users risk paying the price with pothole damage to their cars, avoidable accidents and even — for the most unfortunate road-users — their lives.

However, although a third of drivers don’t realise it, you may be eligible to claim compensation from your local council or roads agency if you can show they knew about a pothole before your accident, but ignored it.

Sign of the times: Potholes are blighting roads all over the country and compensation claims are soaring

The AA said that during November it was attending an additional 225 breakdowns a day caused by potholes — and highlighted recent coroners’ reports identifying two cyclists who were killed after hitting them in different parts of the country.

Admiral car insurance says the first three months of the year are the worst for potholes.

Its latest data reveals compensation claims have increased by 67 per cent in the five years since 2016, with 931 claims reported in 2022. The average cost of repairing pothole damage has also increased by 16 per cent since 2021.

The company says December’s icy snap could cause even more cracks to open up in Britain’s roads, echoing the aftermath of ‘Beast from the East’ in 2018 when plummeting temperatures caused pothole claims to surge by 102 per cent.

Admiral explained: ‘Driving over a deep pothole, even at a low speed, can cause damage to a vehicle’s tyres, alloy wheels, steering alignment, wheel tracking and balancing and suspension.

‘When the steering is severely damaged, it can also make it difficult for the driver to control the vehicle, which could increase the risk of accidents.’

Admiral’s head of claims, Lorna Connelly, said: ‘Over the past seven years we’ve seen an average of over 700 pothole related claims a year.

In years with extreme cold snaps we always see an increase. In 2018, when we had the Beast from the East, this increased to more than 1,000 claims.’

She added: ‘Keep a sharp eye and slow down — swerving can be more dangerous!

‘If you think you’ve hit a humdinger, get out and check for damage at the safest opportunity.’

How to claim for damages to your car

Their Freedom of Information (FOI) requests revealed motorists across England, Scotland and Wales submitted more than 145,000 compensation claims — of which 37,366 paid out — with a success rate of just one in four, but an average successful claim of £347. Yet, one in three motorists don’t know they can seek compensation.

You can check who is responsible for a pothole by putting the postcode into the official website: gov.uk/report-pothole.

RAC research says six in ten drivers (60 per cent) believe the condition of roads they use regularly is worse than a year ago, with a similar proportion (55 per cent) complaining the standard of pothole repairs is ‘poor’. Only one in 25 (4 per cent) think roads have improved in the past 12 months.

Nearly nine out of ten (86 per cent) drivers say they have had to steer to avoid potholes several times, rising to 90 per cent in rural locations (81 per cent in urban areas).

Drivers are 1.6 times more likely to experience breakdown due a pothole than they were in 2006, according to the RAC’s Pothole index.

The Asphalt Industry Alliance’s annual ALARM survey calculates that a total £12.6 billion of carriageway repairs are needed across the UK — or £61,700 for every mile of local road in England and Wales — and that it would take councils nine years to clear the backlog.

But help may be at hand. British manufacturer JCB’s giant Pothole Pro machine has fixed more than 23,000 miles of roads and taken orders from as far afield as Australia.

Around the UK the number of holes the Pothole Pro has filled in over the past 12 months with what it calls ‘a speedy but long-lasting fix’ include 562 in the UK’s original ‘Motor City’ — Coventry.

And while traditional methods of repair can cost up to £60 per pothole, the giant JCB machine can permanently repair a pothole in eight minutes at half the cost at £30.

Why garages are in need of a quick fix

Car repair costs are set to rise — adding to the pain of cash-strapped motorists — the motor industry watchdog has warned.

A poll of independent garages and franchised dealer workshops by the Motor Ombudsman (TheMotor Ombudsman.org ) has revealed that rising costs, taxes and energy bills are the biggest challenge for nine out of ten businesses in 2023. 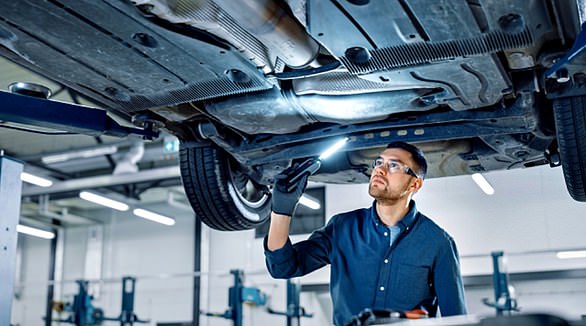 Nearly two-thirds said they expect motorists to put off essential repairs to due to the squeeze on incomes.

Six out of ten garages said the rising cost of replacement components — due to shortages and inflation would be another ‘trying factor’ during the year.

Just under half said they will be looking to avoid passing on higher operating costs in the prices charged to customers ‘due to the challenging economic climate’.

The report said: ‘As consumers continue to rein in their spending due to the ongoing cost of living crisis, close to a third of respondents said customer retention would be a challenge this year.

Following a tough 2022, the report noted: ‘With economic forecasts pointing to a downturn in the UK, 29 per cent of garages and workshops explained that generating new business may equally prove difficult during 2023’.

Bill Fennell, managing director of The Motor Ombudsman, said: ‘Garages and workshops will have to contend with a multitude of challenges this year.

‘At the forefront of these will be navigating a rise in operational costs at a time when many consumers are feeling the strain on their finances, meaning vehicle maintenance and repairs could take a back seat.’