Golnesa ‘GG’ Gharachedaghi from Shahs Of Sunset poses in lingerie from her Intimately line as she promises new designs: ‘I’m certain you’ll want some’

The 41-year-old Shahs Of Sunset veteran had on both black and red lace and satin pieces that made the most of her curves.

In her caption the TV star said something new was coming soon: ‘I’m certain you’ll want some. #IntimatelyGG.’ 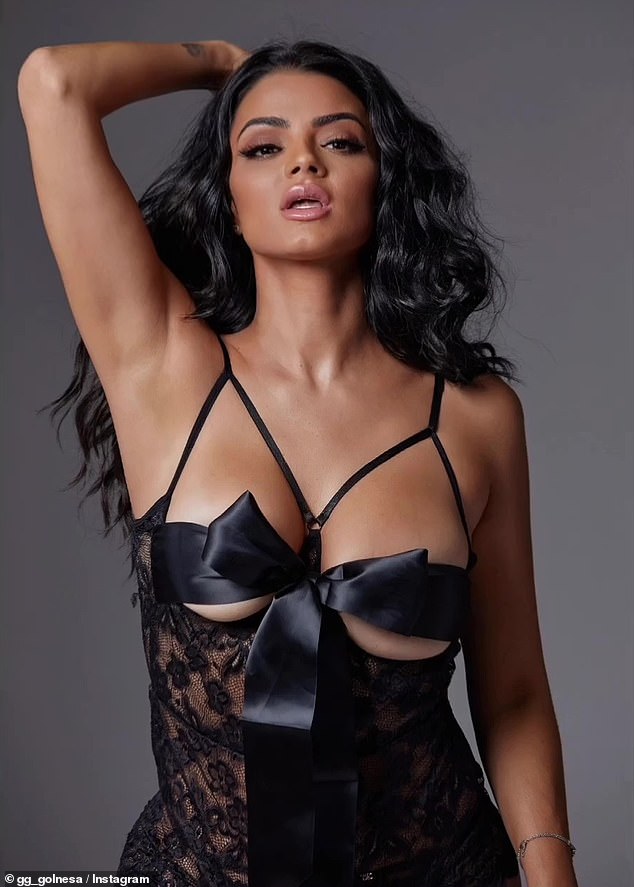 Another look: This lacy outfit had a satin bow over the front of her chest

The media influencer wore her long black hair down as she added sultry scarlet red lipstick to match her ruby toned and black lingerie.

In the all black set, she had on pink lipstick that matched her pink nails.

Both new photos were shot in a studio with perfect lighting to make the most of her photogenic looks.

Late last year the mother of one chose several eye-popping looks for her promo shoot, including an animal print bra and panties combo that showed off her flat abs. 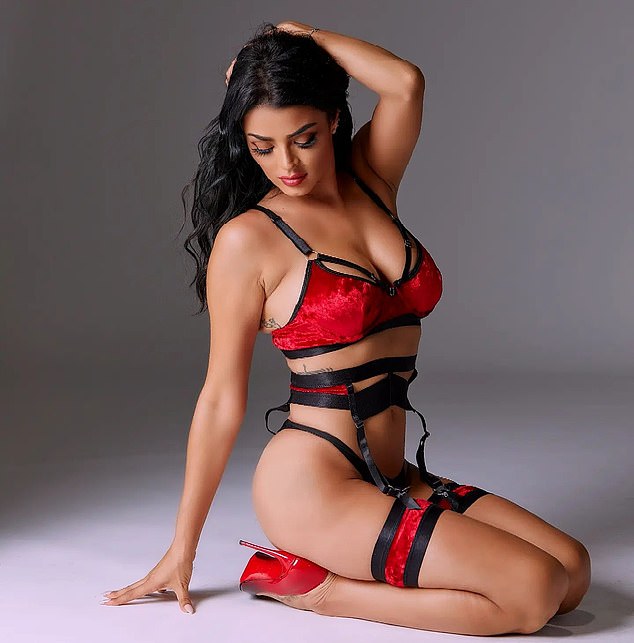 Like a Varga pinup: The 41-year-old Shahs Of Sunset veteran had red satin pieces that made the most of her curves 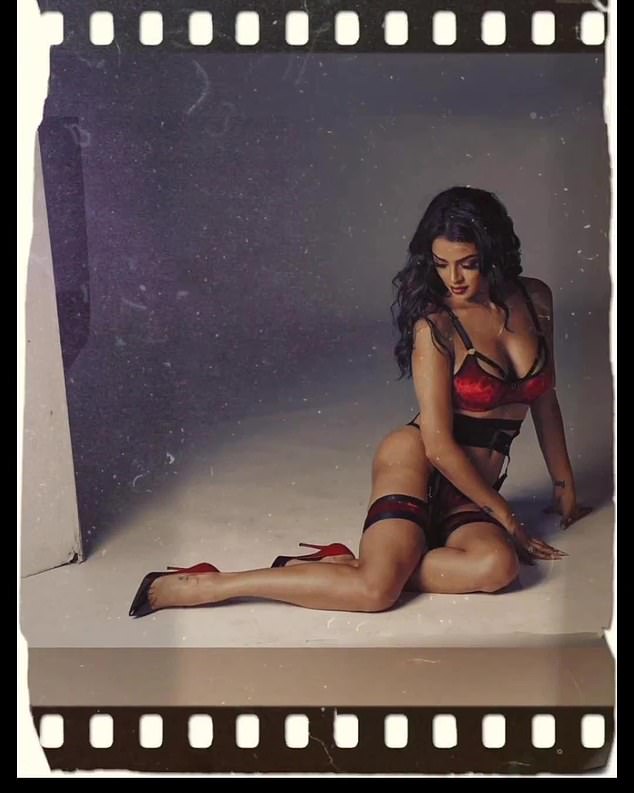 Big news is coming: In her caption the TV star said something new was coming soon: ‘I’m certain you’ll want some. #IntimatelyGG’

The reality star’s toned legs look even longer in a complementary pair of animal print pumps.

The provocative look was accented with a white coverup inspired by a man’s shirt in one look, with the popular podcaster writing, ‘I paid for it… so it’s mine. If you want some… get in line.’

GG also posted ‘I’m not your average baby mama. Coming soon….’ referring to a photo in which she’s paired the leopard print bra and panties with a black menswear inspired jacket.

The 5ft8in doyenne donned a lacy black teddy with thigh high stockings as she sat seductively against a white background, and another in which leans forward giving a ‘come hither’ look straight into the camera. 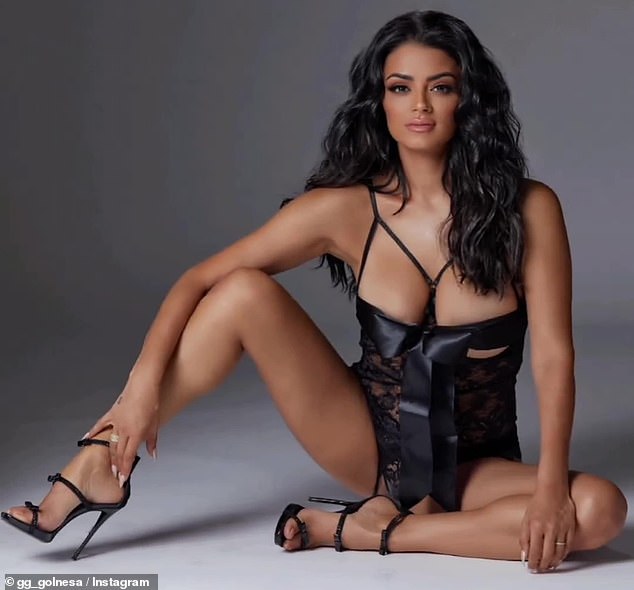 The heels work well with the suit: GG had on strappy heels that elongated her toned legs

GG looked stunning in a black maxi-dress with a racer-back and hip-high slits on either side.

The self-proclaimed ‘Persian princess’ has already tried her hand quite successfully at selling hair extensions and in the cannabis industry as the CEO of Wusah.

The star says she first turned the cannabinoid CBD to deal with her rheumatism. The company sells a variety of products including topical creams and capsules.

Shahs of Sunset followed a group of six Persian-American friends in Los Angeles who tried to juggle their active social lives and careers while also balancing the demands of their families and traditions.

The socialites had busy dating lives and are prominent in the party scene. Among the featured friends were real estate agent Mercedes, controversial singer Asa and classic Persian Princess Golnesa. 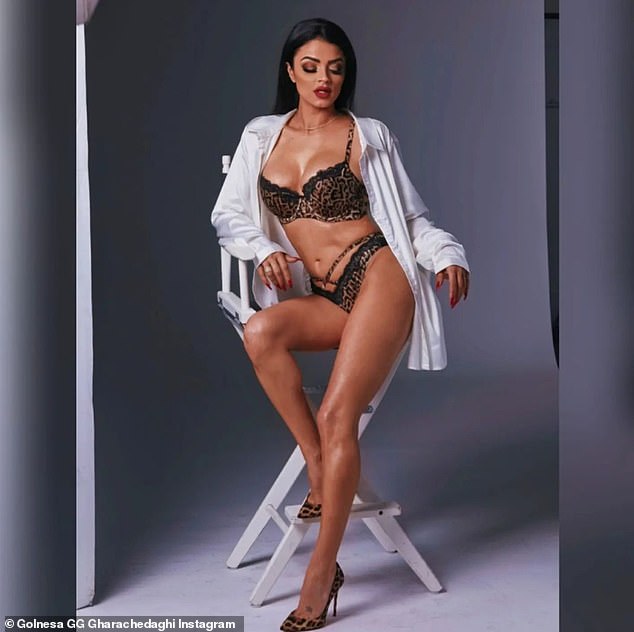 New venture: In early 2022 she was seen in her line of sexy underthings called Intimately GG; here she is in a leopard print set 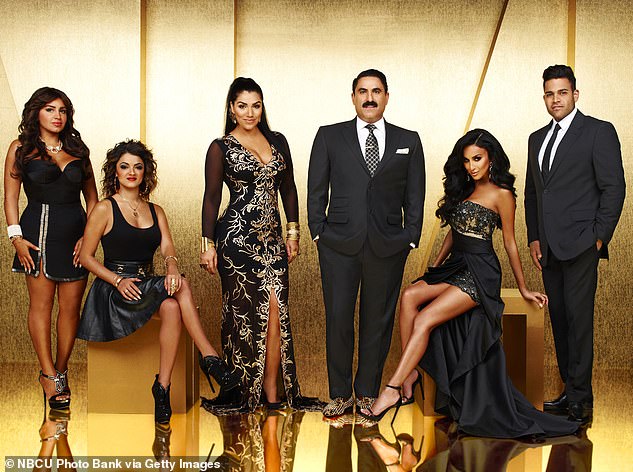 Done: The reality TV series Shahs Of Sunset has  been canceled. The Bravo series that kicked off in 2012 came to a close after season nine